This page of our Elden Ring guide is dedicated to Dragonkin Soldier of Nokstella boss battle. This opponent is completely optional - you can skip him and still see the ending. Aside from Nokstella version, a standard version is also encountered. These are found in Siofra River and Lake of Rot .

The Dragonkin Soldier of Nokstella can be found in the Ainsel River region. The closest site of grace is Ainsel River Downstream - it is marked with 3 on our map.

Here you will find information on how to get to the Ainsel River.

Dragonkin Soldier in the Siofra River

Another instance of the Dragonkin Soldier battle is found in the Siofra River region. To get to him, travel to the Worshipers' Woods site of grace . It is marked with 2 on our map. 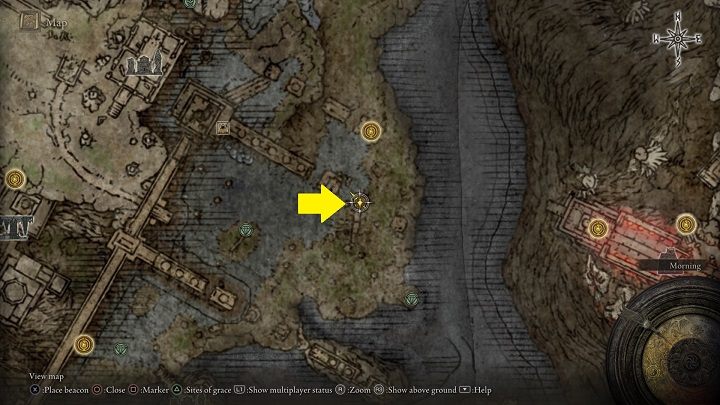 From there, head south to a structure (as shown in the screenshot above) and climb to its top (you'll do so thanks to a fallen column). There you will find a teleporter that will take you to the location you need . 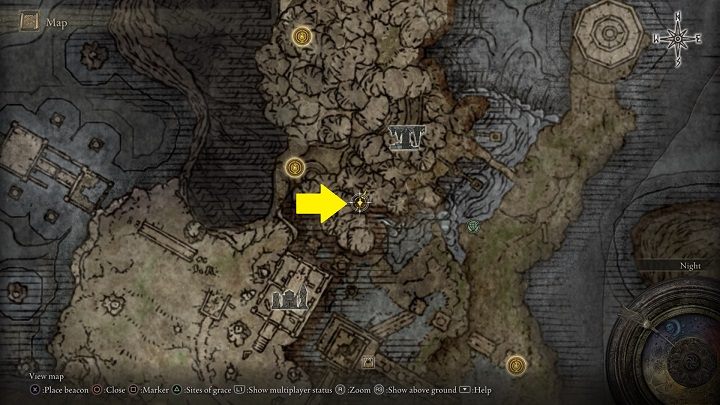 From there, head northwest , where you will find the Dragonkin Soldier of Nokstella lying in the water on the plateau.

Here you will find information on how to get to the Siofra River.

Dragonkin Soldier in Lake of Rot 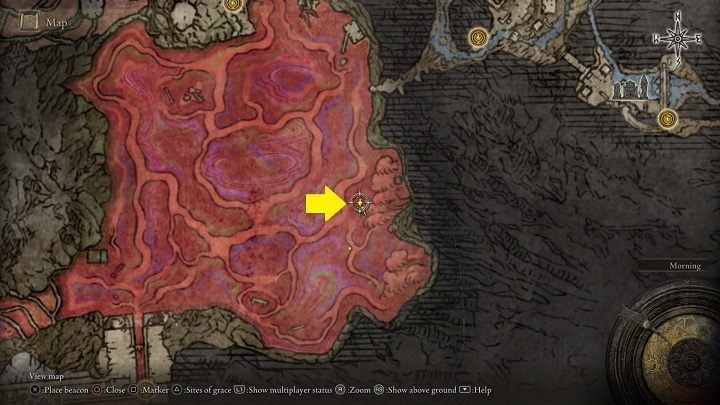 Another instance of Dragonkin Soldier battle takes place in Lake of Rot. To get there, travel to Lake of Rot Shoreside site of grace (marked with 1 on our map) and proceed to the eastern part of the map. This is where you'll find a button thanks to which platforms will surface creating a place for you to conduct the battle. . Before embarking to deal with the boss, prepare a supply of Preserving Boluses - you'll need them to deal with the stacked scarlet rot status.

Here you will find information on how to get to Lake of Rot. 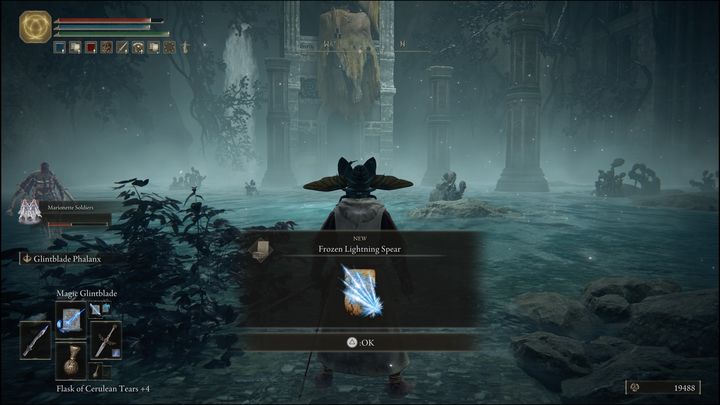 For defeating the Dragonkin Soldier of Nokstella, you will receive Runes (12,000) and the Frozen Lightning Spear incantation . 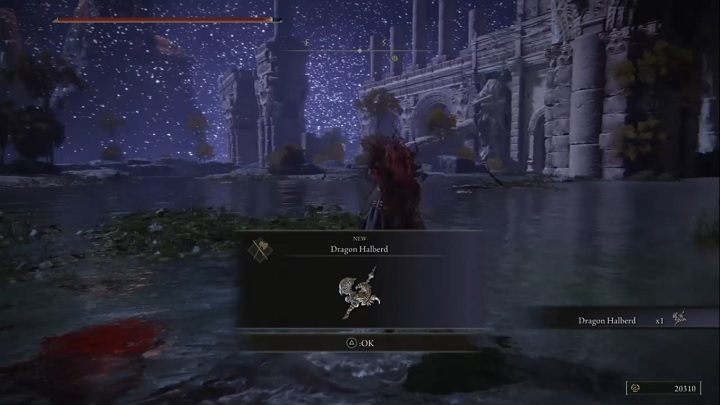 For defeating the Dragonkin Soldier in the Siofra River, you will receive Runes (16,000) and a Dragon Halberd . 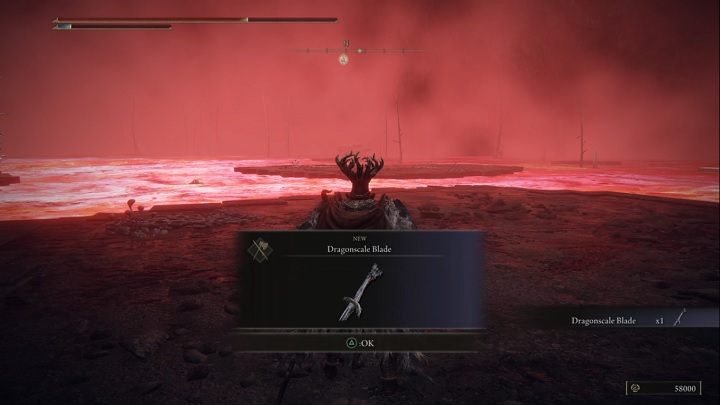 For defeating the Dragonkin Soldier in the Lake of Rot, you will receive Runes (58,000) and the Dragonscale Blade katana .

After entering the arena, you will have a moment to use items that offer advantage in combat, for example, Exalted Meat, which increases physical damage. You can also use ashes, but we recommend a helper with high durability and mobility. 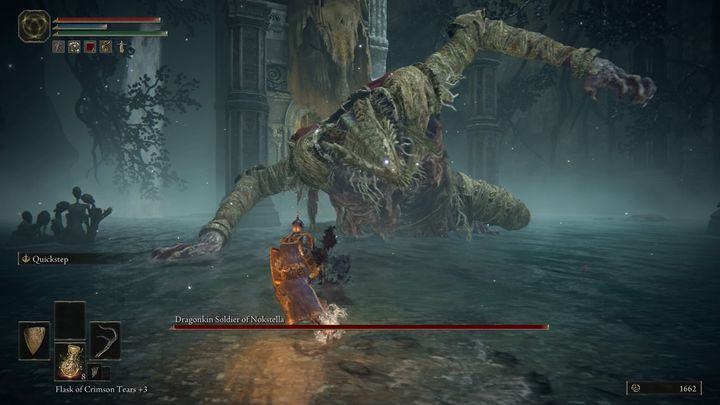 Once your opponent starts attacking, quickly get behind him. By staying close to his legs, you will avoid many attacks, as this enemy often attacks with his front paws. However, watch out to not get next to his stomach - hitting him there may prove difficult. 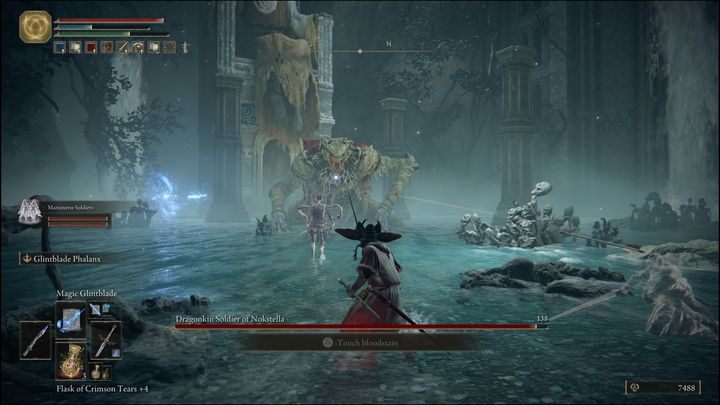 Due to the large size of the enemy, avoid targeting him . The most vulnerable spot is the opponent's head, but staying on it means that you expose yourself to front paw attacks. The enemy basically attacks with his hands all the time, so avoid staying close to them. 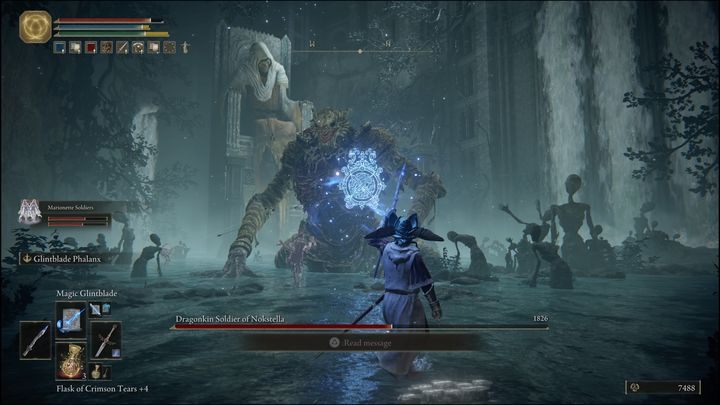 No matter where you are, keep a close eye on your opponent. He targets you very quickly and constantly places himself towards you, so you need to be ready to dodge before impact.

as being struck means being stunned or even falling to the ground. There is a risk that once you get struck by the combo, you may lose all your HP as you're constantly hit without having a chance to get back on your feet. 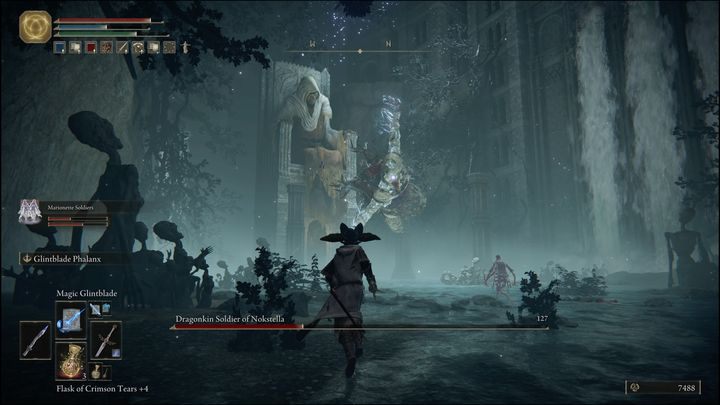 Once you take half of your opponent's HP, the second phase of the fight will begin . In case of Nokstella version, the opponent will start wielding magic (of ice and lightning schools) When you notice that he is about to throw magic spears, run as far as possible.

Also, watch out for the frostbite status that stacks with each hit. Having a supply of Thawing Boluses will make matters easier . 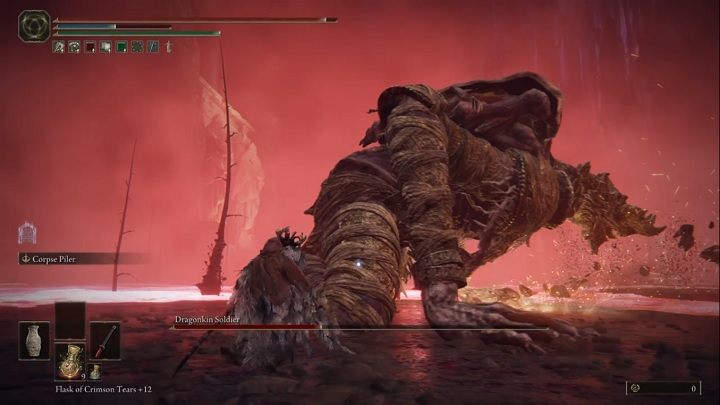 When it comes to standard versions, the combat is less complex, as they don't use magic, and the battle consists of a single phase only . Simply continue to attack their feet, while avoiding paw attacks by dodging.