On this page of our Elden Ring guide, you can learn more about Hyetta's questline, taking place in Liurnia of the Lakes. Completing her questline unlocks a new ending. Our walkthrough will show you the starting area of the questline, offer walkthroughs for the indiviudal tasks, and list rewards netted for completing them. 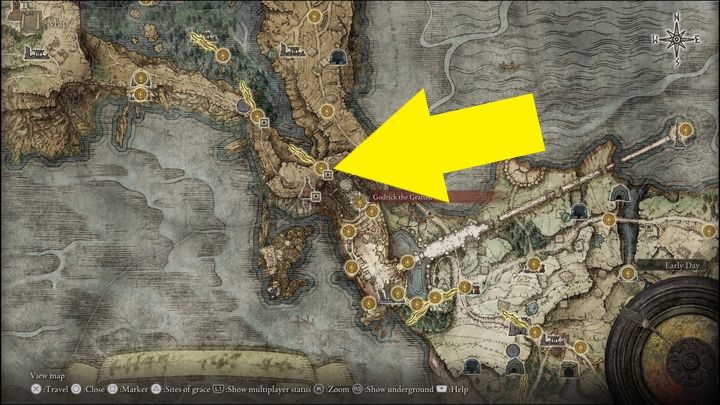 You can find Hyetta by following the yellow map marker. She is found in Liurnia of the Lakes, at Lake-Facing Cliffs site of grace to be exact. However, in order to find her at the destination, you're gonna need Irina's Letter . 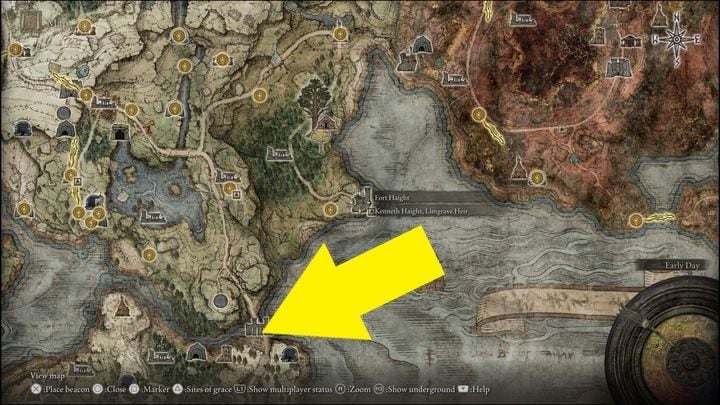 To find Irina, you need to travel to the northern part of Weeping Peninsula.

Start by visiting Irina. Talk to her. You'll learn of trouble at Castle Morne . 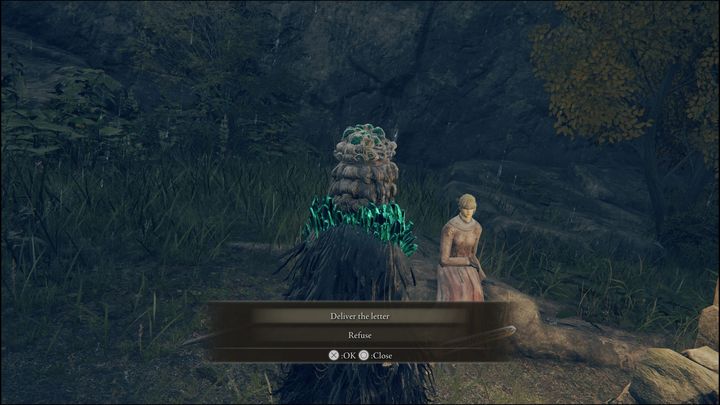 Irina is sitting on a rock. Talk to her, then agree to deliver a letter to her father who can be found in a castle in the southern Weeping Peninsula. 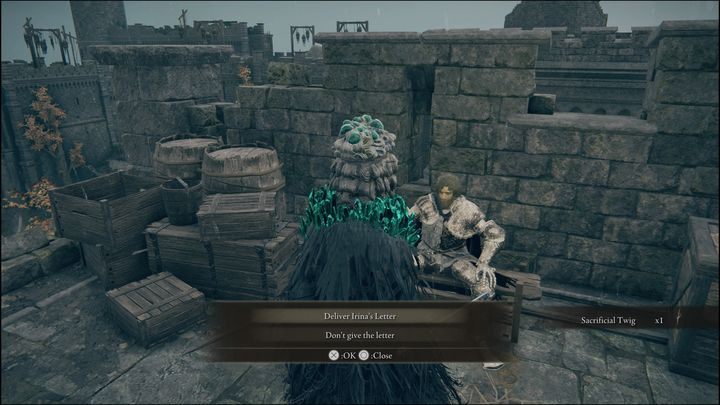 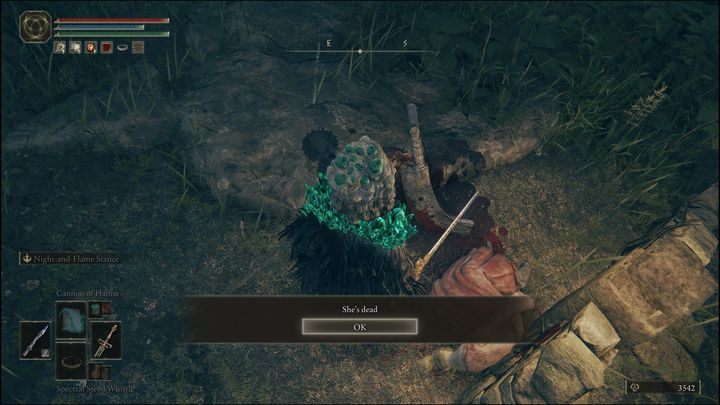 After returning to Irina, it will turn out that she is dead. You must now go back to her father, Edgar. Edgar will relocate to the area where you've found dead Irina, where he promises to get his revenge on the people responsible for the act. 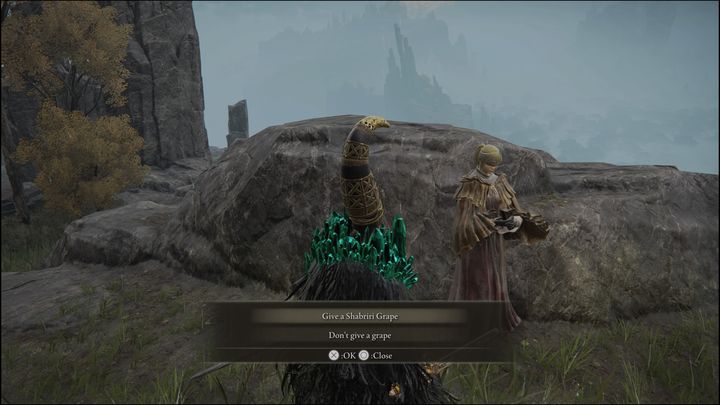 Now you can go visit Hyetta. Talking unlocks a new gesture. Moreover, after defeating Godrick, the Grafted, you'll find Shabriri Grapes in the throne room. To continue the quest and gain access to the new ending, you have to feed them to Hyetta. 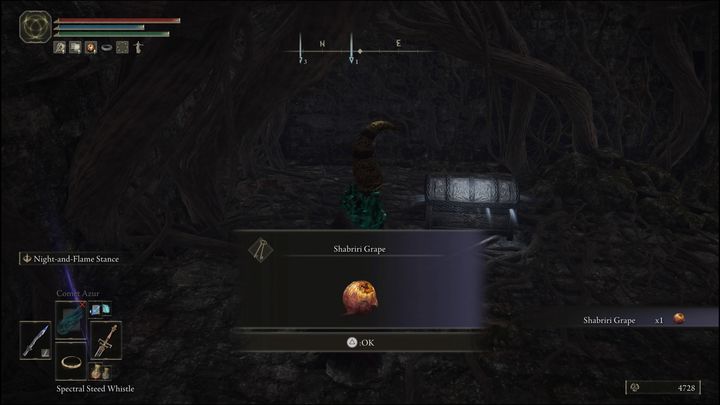 Each time you do this, she will relocate to a new area.

The next meeting with Hyetta takes place in Liurnia of the Lakes, in Purrified Ruins to be exact. 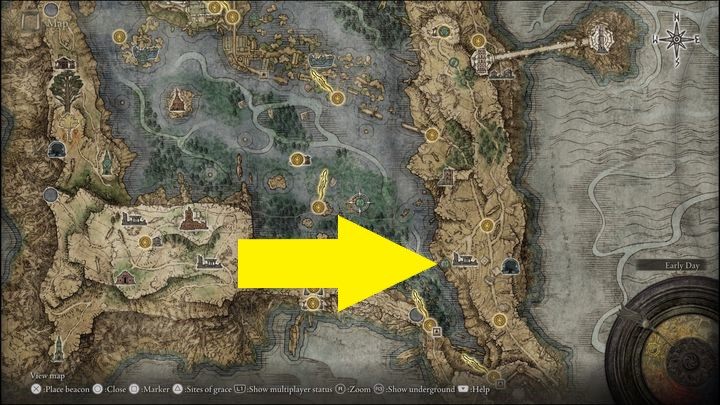 Hyetta will be waiting there until you feed her with the second grape. 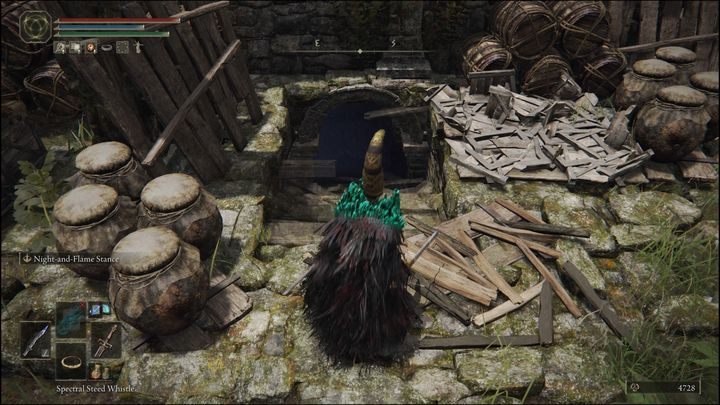 Shabriri Grapes can be found in these ruins. You have to destroy the urns and chests, and then go downstairs. There you can find the chest with grapes. Go back to Hyetta and give her a grape to eat. Thanks to this, Hyetta will move to the next location. 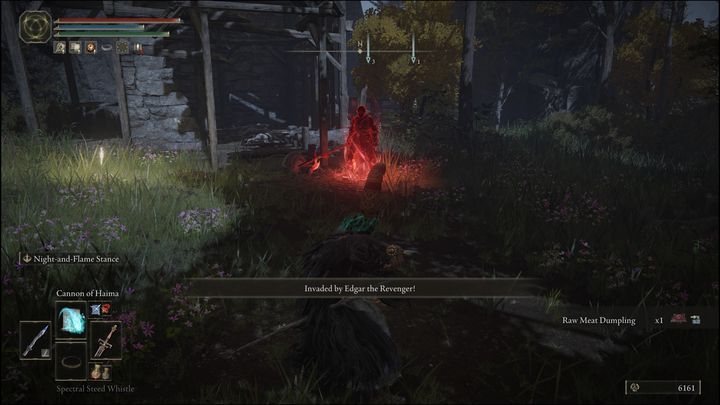 Now its time to get the third grape. You will receive them for killing Edgar the Revenger . 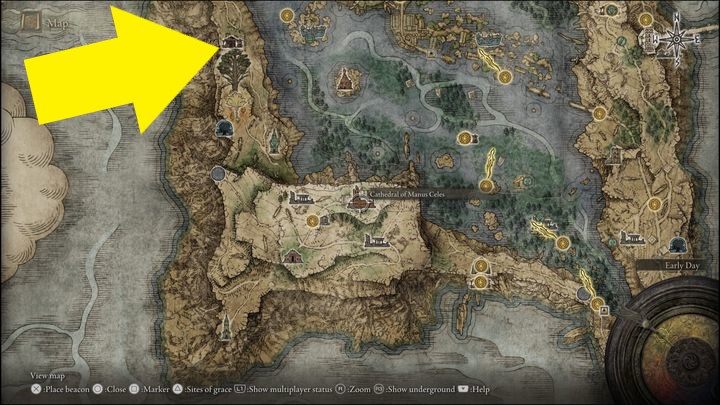 You can find him in Liurnia of the Lakes, in Revenger's Shack to be exact. The location of the shack is marked on your map with a yellow arrow. He only appears at night, so visit the nearby site of grace and rest till nightfall. 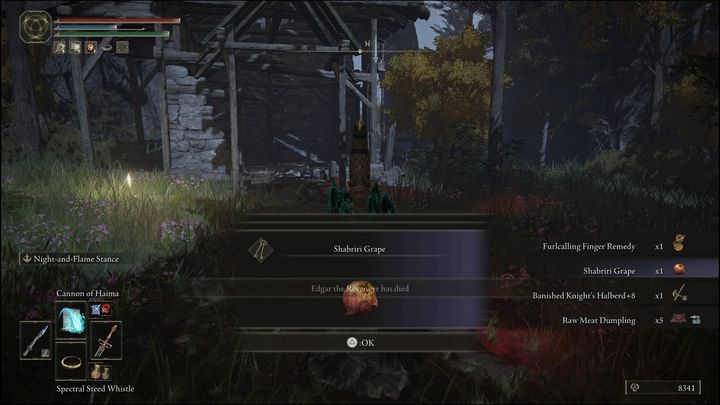 Aside from the grape, defeating him also yields his halberd, instantly upgraded to level 8. 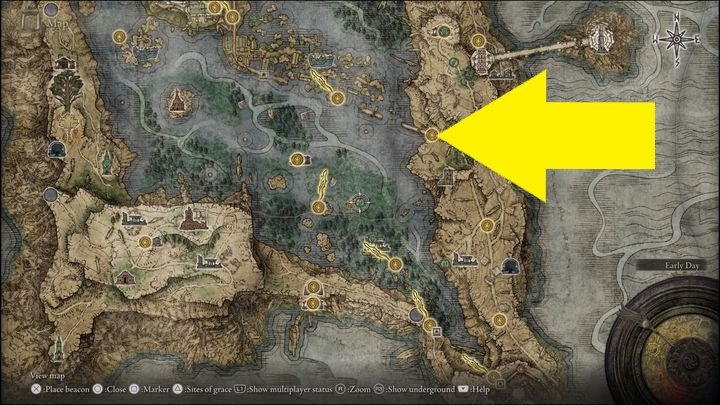 Hyetta will now appear near the Gate Town Bridge site of grace. 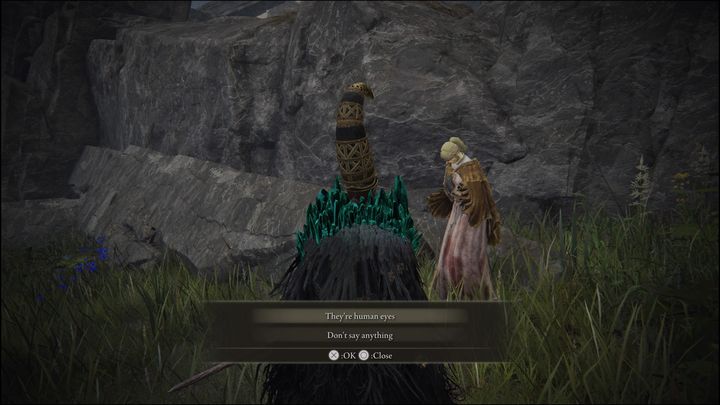 The third time Hyetta eats a grape, she will ask you about the effects of the grapes. You have to answer that grapes are actually human eyes . Only this dialogue option pushes the quest forward. Rest at a site of grace and talk to her again exhausting all dialogue options. 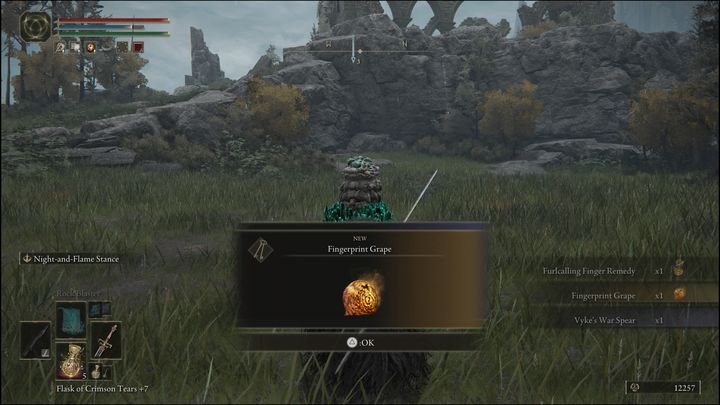 The fourth grape is received after defeating Vyke . You can find him in Church of Inhibition. 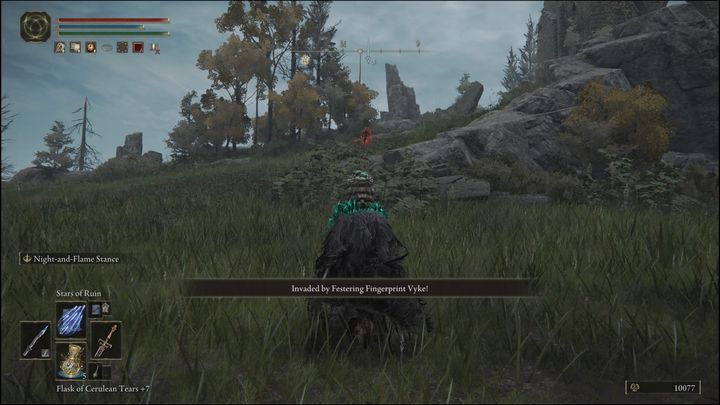 To get there, you need to travel through the Frenzied Flame Village . 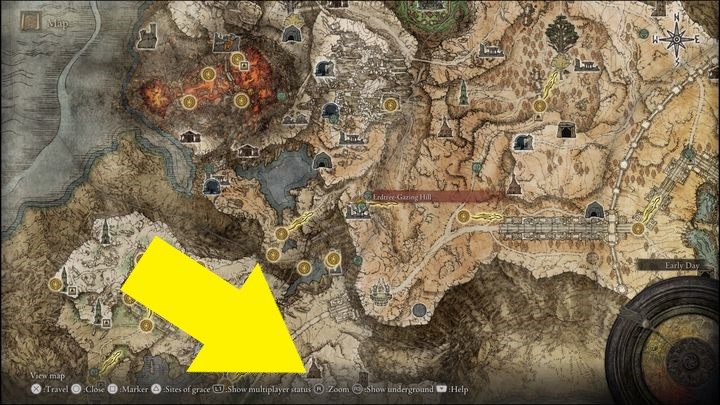 After defeating Vyke, you will receive Fingerprint Grape and his weapon. 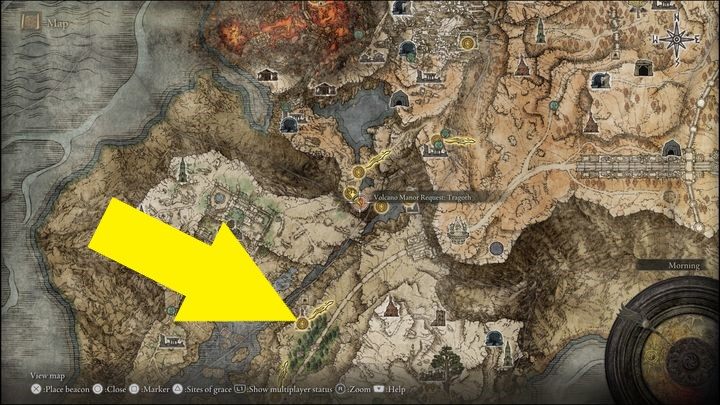 Hyetta can be found in Church of Bellum . 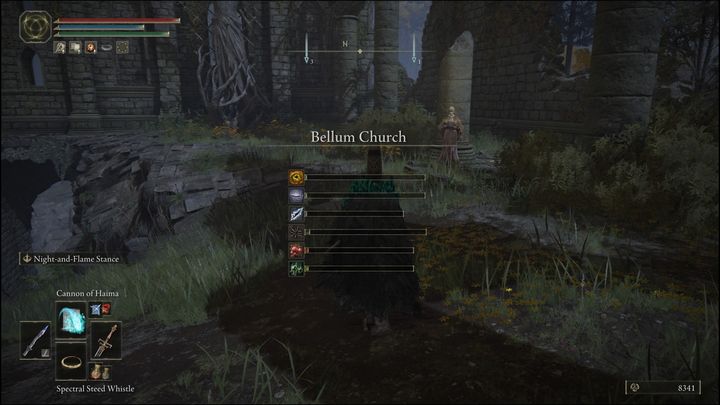 After giving her another grape, Hyetta will move to the Frenzied Flame Proscription in Leyndell . 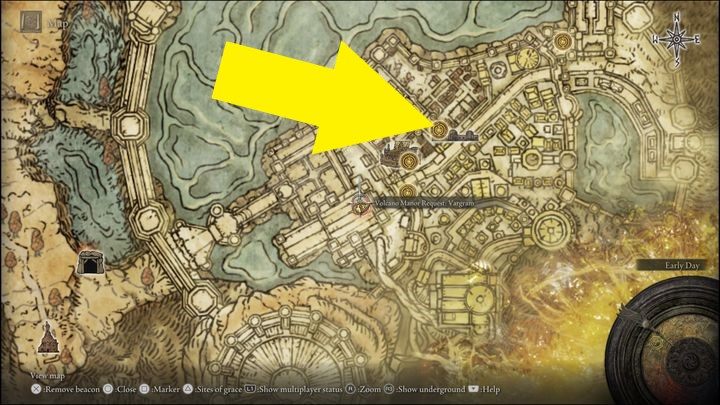 The entrance to this area is in Leyndell sewers. 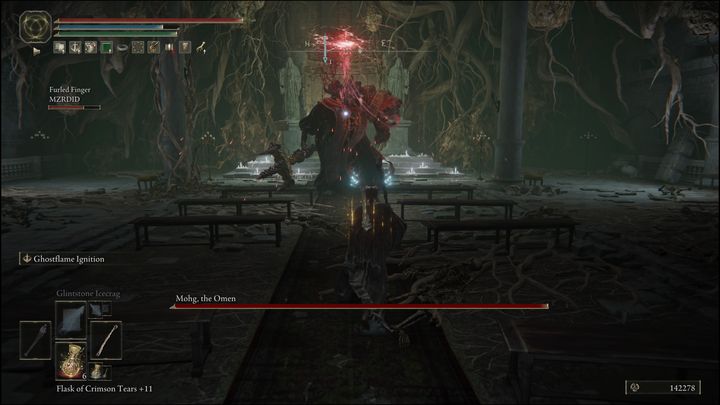 Defeat Mogh, the Omen in the sewers and approach an illusory wall behind the boss's throne. Hit the wall and follow the newly unlocked path. 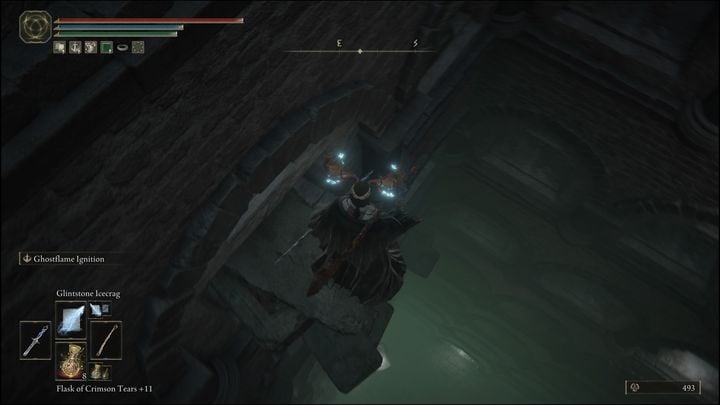 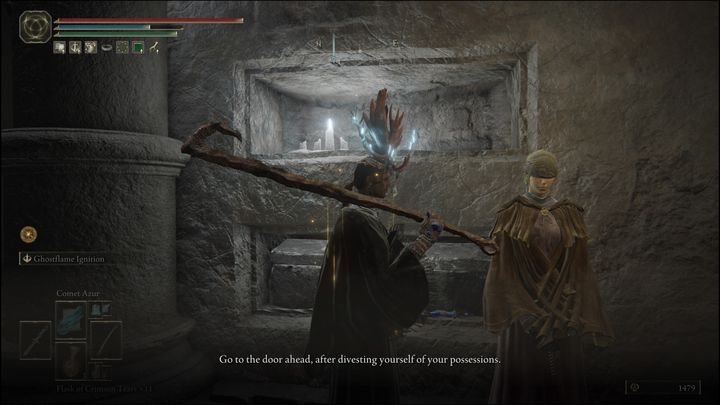 Hyetta will be found there. Talk to her - you'll learn that you need to unequip all your items. Otherwise the door won't budge.

Watch out! As you open the door, you will be marked by three fingers. Accepting it means you'll receive an ending involving Frenzied Flame. The only way to change the ending is to complete Millicent's questline i.e. obtaining Unalloyed Needle and using it at Dragonlord Placidusax arena. 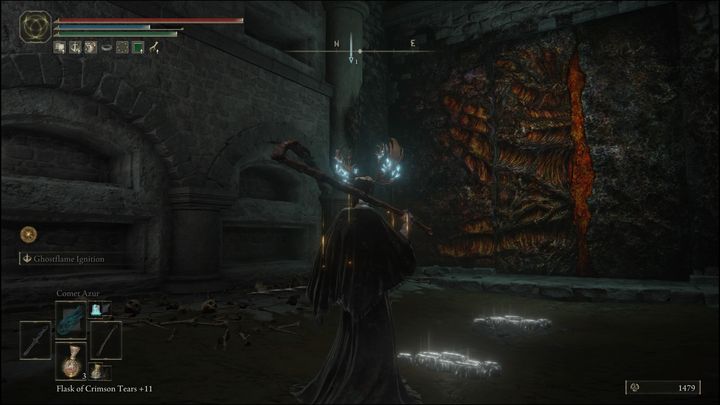 After entering the room with three fingers and accepting the flame, go to Hyetta and talk to her again. 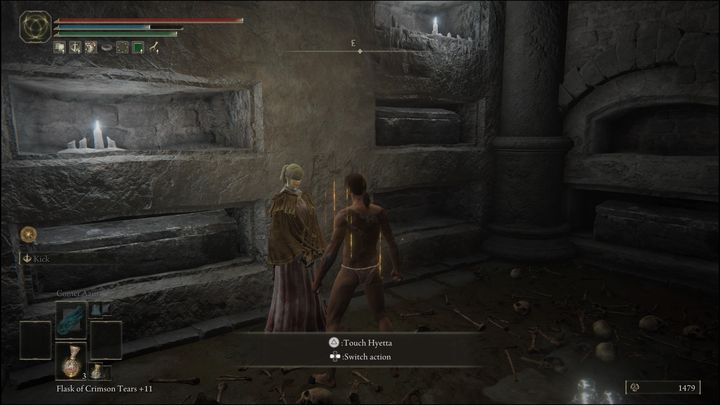 When you touch Hyetta, you will receive rewards and items. The quest is successfully completed.

For completing Hyetta's questline, you will receive Frenzied Flame Seal and unlock a new ending related to it. 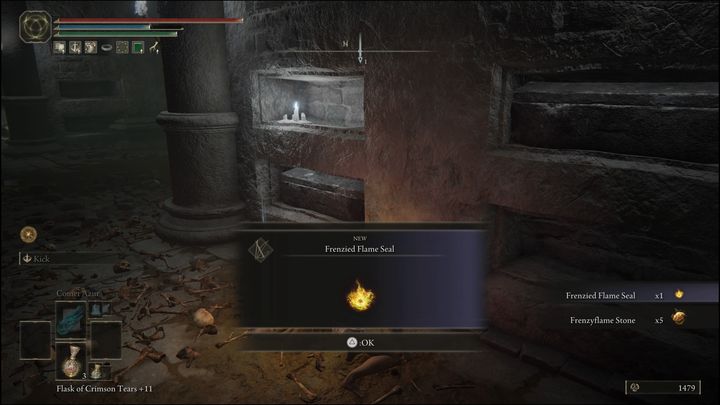 What's more, in this location you can encounter a few useful items. 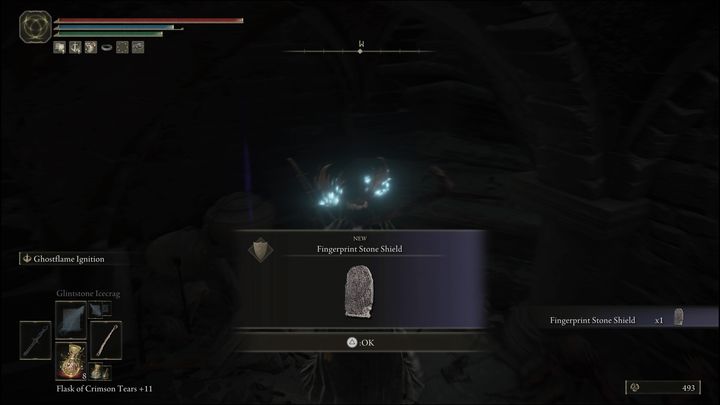 These include Fingerprint Stone Shield and Inescapable Flame incantation.