This page of the Elden Ring guide is dedicated to the final boss battle of the story, that takes place in Leyndell, Ashen Capital. His name is Radagon of the Golden Order.

The page may contain spoilers about bosses and story.

To be able to face the boss, you must first defeat Hoarah Loux, Warrior. Defeating him unlocks the Elden Throne site of grace. Once you regain control, go up the stairs and cross the barrier. The encounter has two phases. Once you defeat Radagon, you are taken straight to another boss battle against Elden Beast, which has to be defeated in order to complete the game. 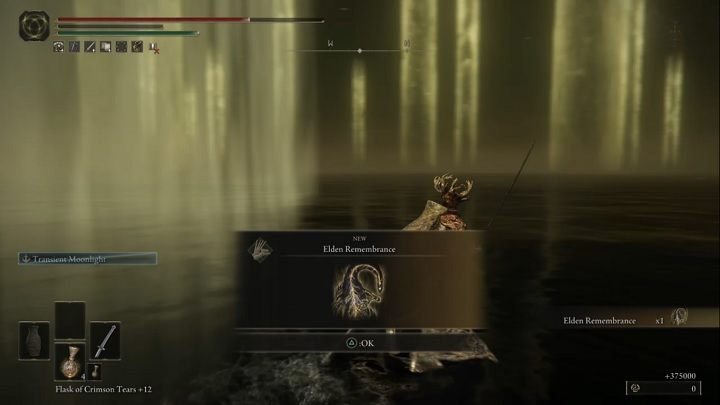 For defeating Radagon and then the Elden Beast, you will receive Runes (375,000) and the Elden Remembrance .

Radagon: Melee build - how to beat?

After entering the arena, you will have a moment before the enemy starts attacking. You can use this moment to start with strikes of your own or to use ashes or items that can make the battle easier. Consider using something that increases your attack power e.g. Exalted Meat. It will allow you to make the encounter shorter. 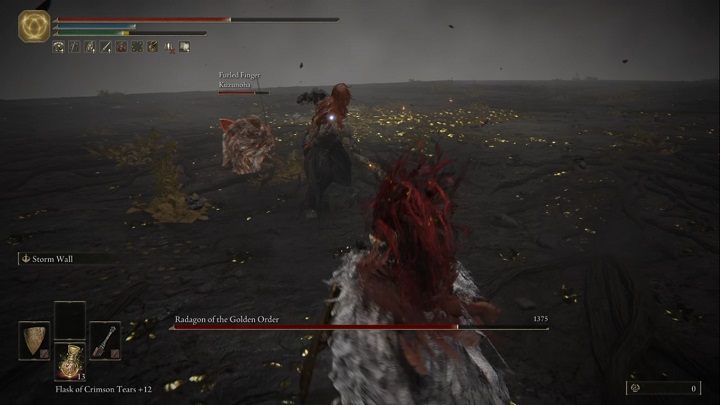 In the first phase, Radagon attacks very often with his weapon, which causes explosions of various sizes. As he hits the ground with his weapon, a lit area will appear on the floor which is followed by a blast. Usually, the lit area is in front of him, so consider dodging towards the enemy to be behind him at the moment of the blast. If you stay away from the boss, the battle will prolong. 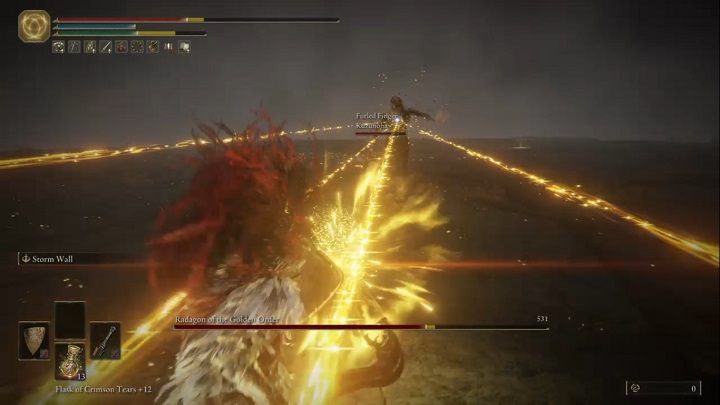 Dodging backwards is not a good idea for another reason - when you are away from the boss, he will catch you with a triple shot . The attack is relatively easy to avoid (or blocked with a shield, but you'll receive damage even if the block is successful) but you lose a chance to strike. 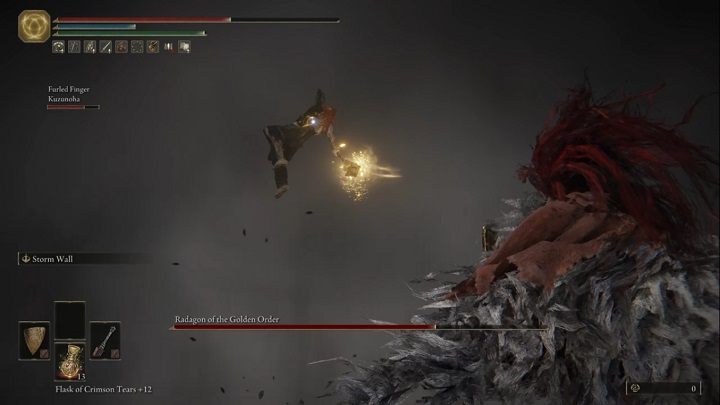 Staying away from the opponent may also cause him to jump in the air and land with a death-from-above attack that has serious range. However, avoiding it is the same as with other attacks - dodge before impact. After the jump attack, you have a moment to deal a few attacks, as the enemy is gathering himself to conduct further attacks. 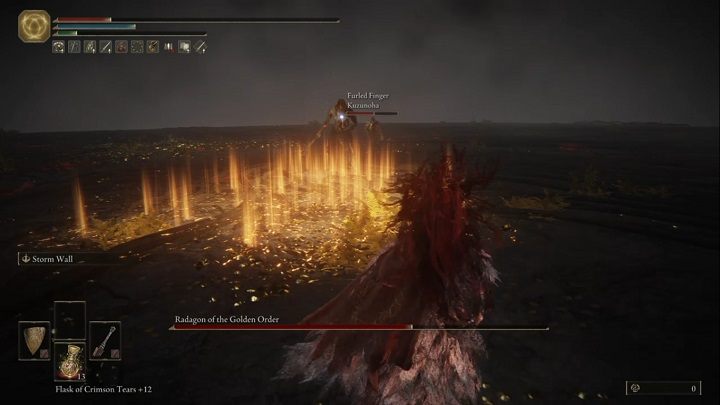 If, on the other hand, it happens that you are forced to attack from the front (or you choose to do so), you can avoid the aforementioned explosions through jumping. This can lead to make unbalancing the opponent faster - as long as you use death from above attacks. This is another way to shorten this fight. 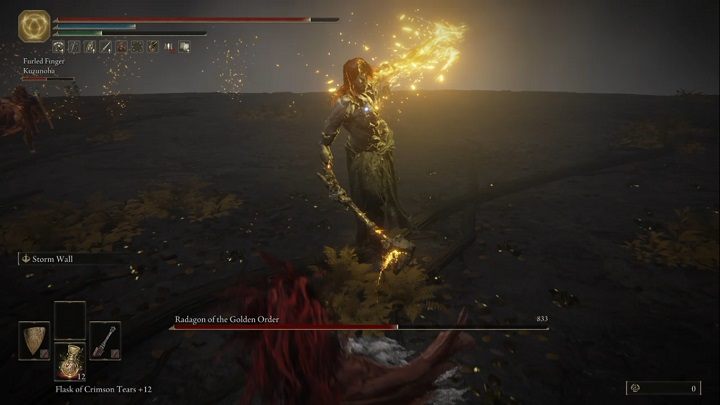 During the first phase of the battle, the enemy may attempt to grab you. You will recognize this most dangerous move the opponent has by the fact that his left hand will burn gold. Make sure to avoid it, as it deals great damage and can depose you of your HP or even kill. When the grab is successful, Radagon will throw your hero into the ground, choke him and end with a powerful blast. During this time, he is invulnerable to damage, so your ally (if you have one) will not be able to deal any damage to him. 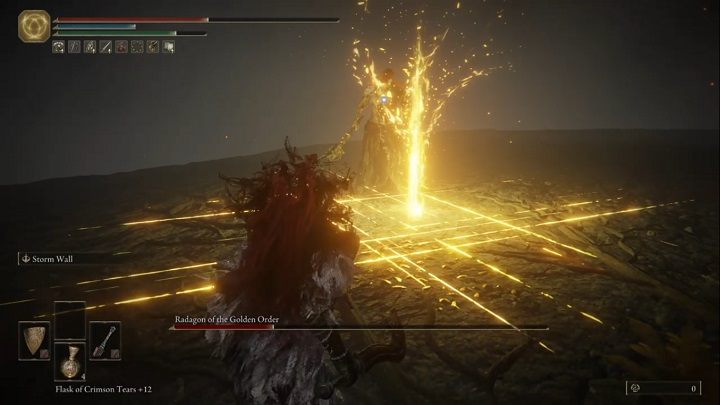 The enemy also sometimes strikes a bolt of golden lightning into the ground, which looks like a tree. A mesh will appear around it, which is best avoided - there will soon be an explosion reaching as far as the edges of the mesh. This hazardous area will be active for some time, making the boss hard to reach, as he most likely will be inside the spell range. 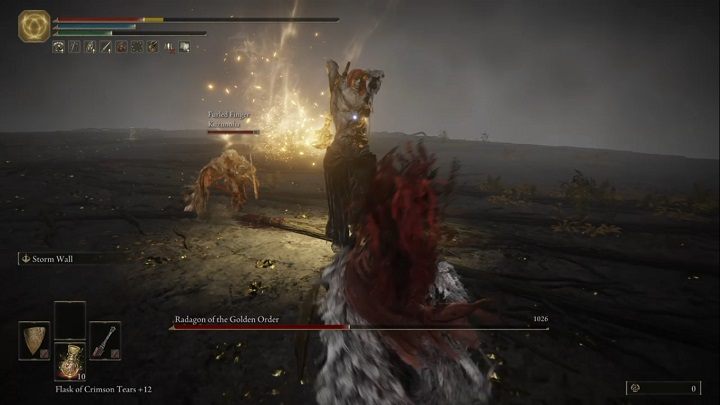 Once you depose the enemy of half his HP, he will begin teleporting with almost every move he makes. Each teleport will also result in an explosion, so it is hard to get close to him without taking damage. However, if you manage to get feel of the enemy, you'll be able to deal a few blows between teleports. 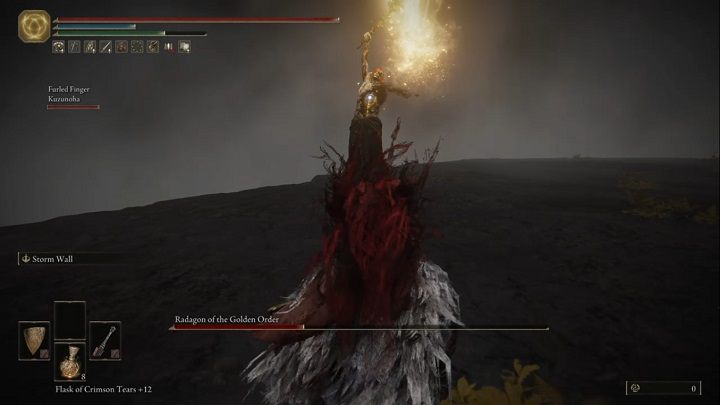 One of the boss's most dangerous attacks is the one where he raises his weapon high in one hand. This means he is about to attack with three powerful blows that cause delayed blasts over a very large area. In that case, your best bet is to stay in melee range, to have a chance of getting behind the enemy. Dodging backward is not a good idea, as each strike has greater range and it is hard to get so far away that the attack won't reach you. However, if you're in the range of the attack, you'll need perform 2 dodges per a single attack. You can also mix dodges with jumps which makes the matter easier. 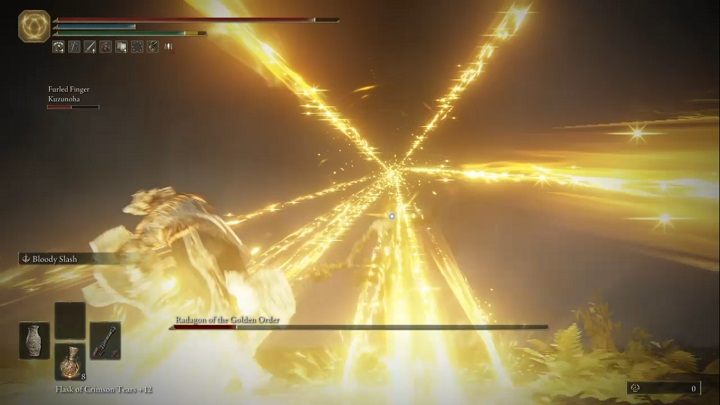 The fight against Radagon has to be mastered well, as it is followed by another boss battle. The key here is resilience and studying your mistakes. We recommend fighting aggressively, but stay careful, as one mistake can end up with a lot of damage received.

After being transferred to the new arena, you have a moment to use Ashes or items that will help you in combat. Consider using Holyproof Dired Liver, which will increase your holy magic resistance. Most of the Elden Beast's attacks deal holy damage. 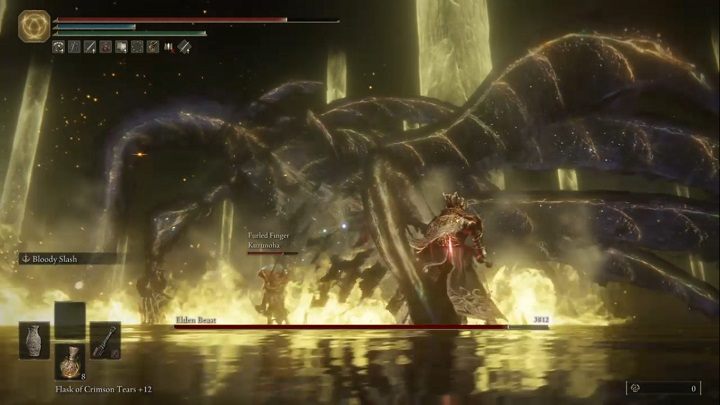 Once the actual fight starts, go behind the Elden Beast as soon as possible. This way, you will avoid the potential fire attack that the enemy likes to use when away from you. 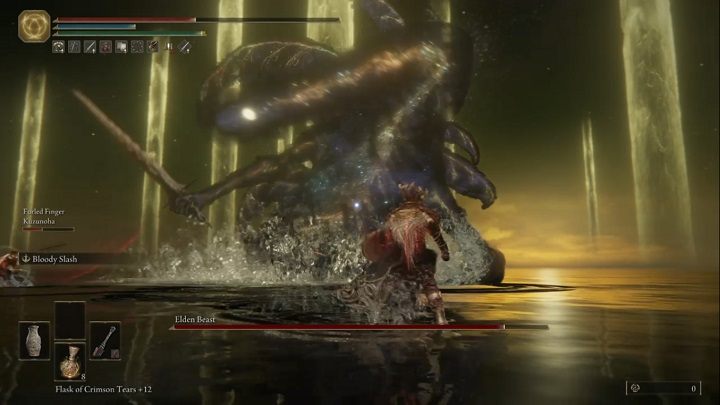 Also, watch out for the enemy's horizontal sword attack when you are at a medium distance from him. The combo consists of three attacks that are based avoided by dodging. However, get used to relatively slow speed of these attacks,. 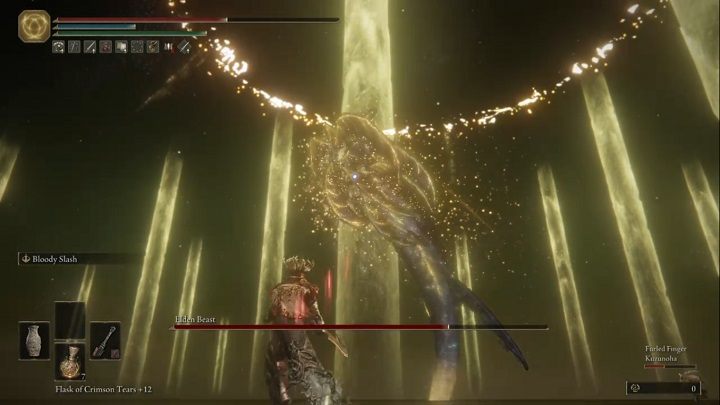 The Elden Beast will periodically move away from you to become airborne and generate a large ring that deals damage. In such a situation, run as far ahead as possible, as the circle will materialize near you. To avoid taking damage, you have to get outside of its radius - jumping will work best here. 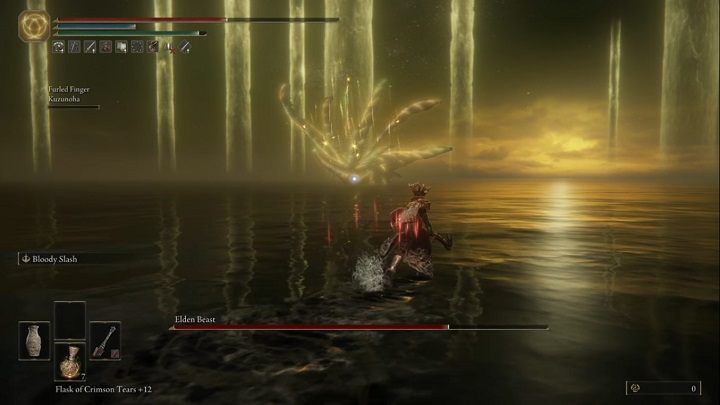 Another attack that can take place when away from the opponent, is a rain of golden projectiles. If you notice that the Beast's limbs rise up and the Beast itself glows gold , sprint forward. This way you will avoid all the missiles coming your way. It's best to stop targeting the enemy during this time. 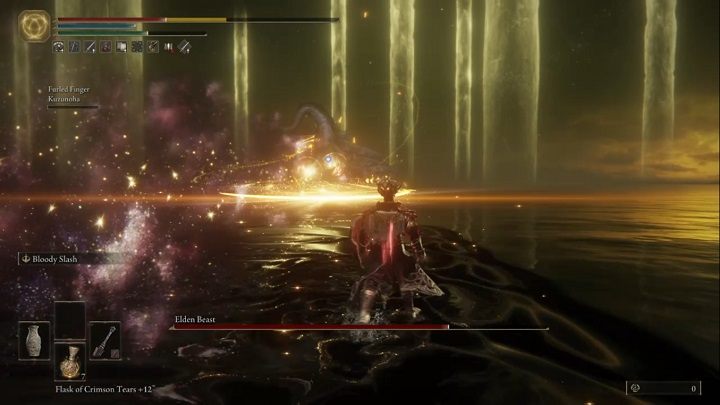 Elden Beast can also create a "magic cloud" - after a moment, explosions will begin in the range of the clouds, so move away from them as quickly as possible. This attack may sometimes be accompanied by another attack. The enemy can also shoot "discs" at you and avoiding them requires a little precision. If you're struck, the attack will stun your hero for a moment, which will make further dodging much harder. Both attacks happen interchangeably. 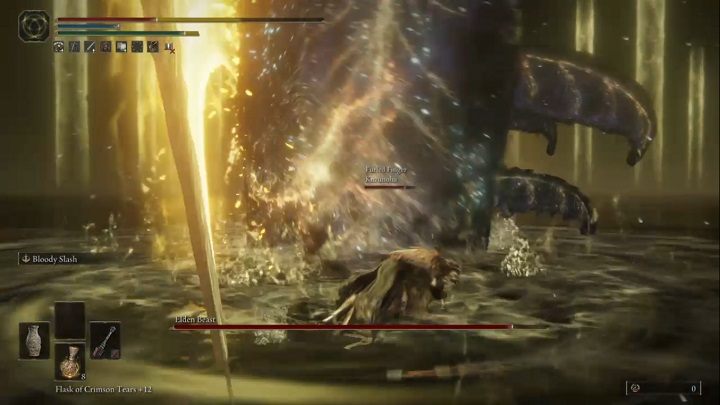 When you are close and in front of the Elden Beast, it can launch a very strong attack during which it will stick its sword into the ground causing large blasts. Only way to avoid them is by performing a series of dodgea at right intervals. However, keep in mind that the final blow comes a bit later than the others. It is best to avoid similar situations and not expose yourself to this attack, although of course this is not always possible. 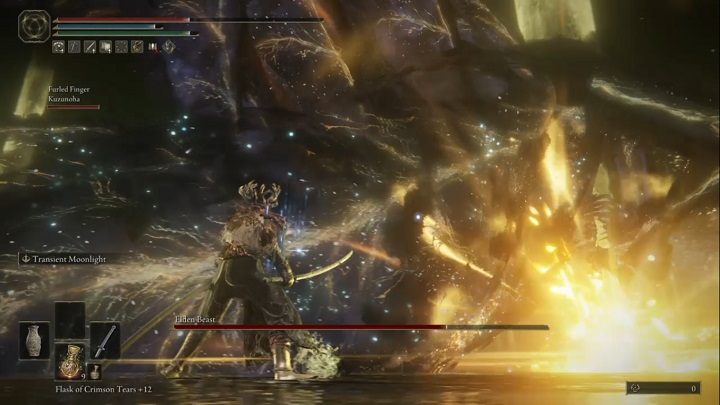 When you are close to and in front of the Elden Beast, he can also stick his sword into the ground once and then hold it in that position generating energy for a blast. In such a situation, even if you get behind it, you can still get hit. Therefore, you will do well to move away as far as possible. The explosion deals relatively high damage. 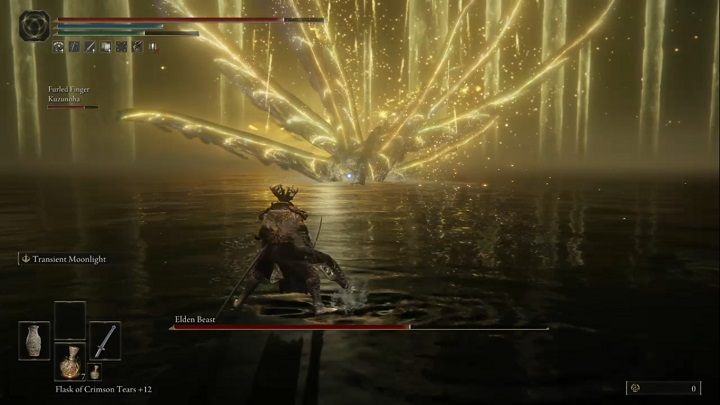 Sometimes the Elden Beast will move away from you, moving forward and releasing a rain of golden missiles. In this situation, stop targeting it and, like in other situations, sprint towards her. Be careful though, because after this attack, the Beast may switch to another one, where it fires the aforementioned disks. 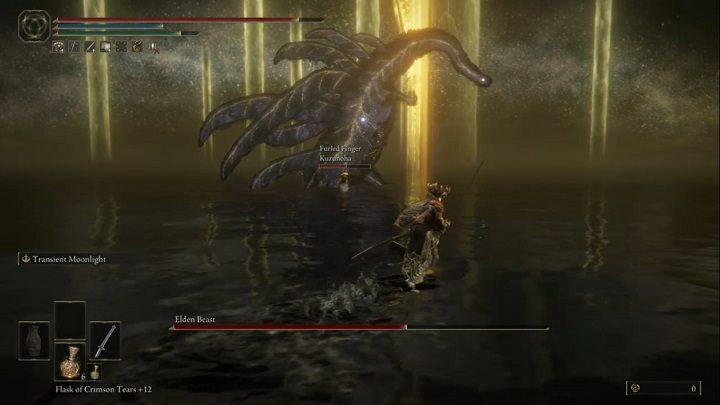 Another attack to avoid is when the Elden Beast takes a big swing with a charged sword, creating a huge wall of holy magic . In such a situation, roll towards it - as long as you are close enough to be able to land behind it. Otherwise, it is better to dodge backwards - the wall will shoot forward, though at a relatively short distance. 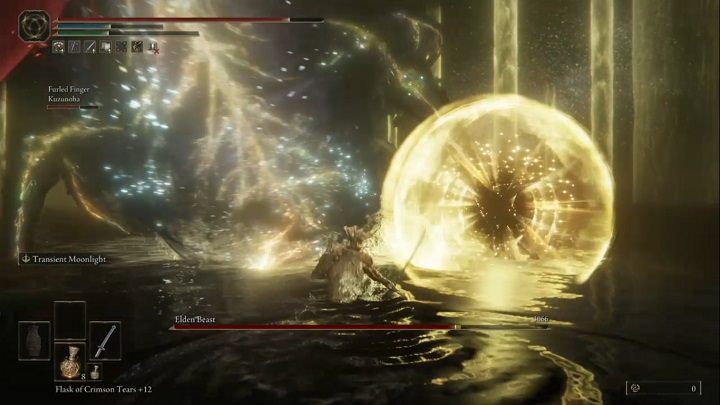 However, when you notice that a ball of holy energy is gathering at the hand of the Elden Beast, it means that it will try to grab you. In such a situation, you have several options. You can perform a perfect dodge right before the grab lands, Or you can sprint in the opposite direction of the beast and just get out of its reach. Another option is to dodge towards the enemy. If you are caught, a series of arrows will strike your hero. 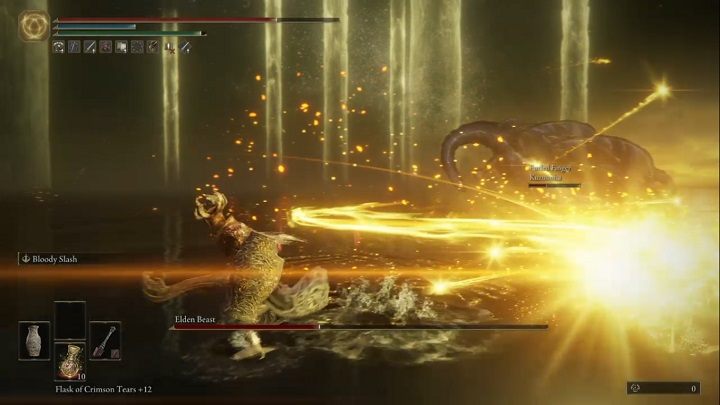 In the second phase of the fight, the Elden Beast receives access to new attacks. One is a series of magic missiles fired that home towards the player and explode at the end. Being struck doesn't cost a lot of HP, and the missiles don't stun, making it easy to avoid a potential trap. However, watch out for an explosion at the end of the attack. You will know its coming thanks to the growing golden light. 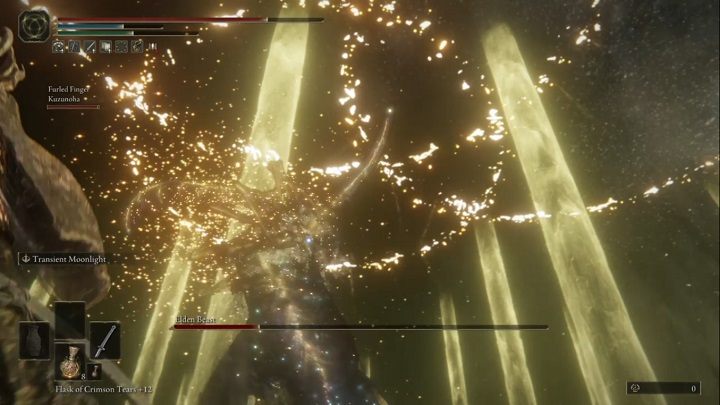 Previously, the Beast produced one circle from which you had to escape. In the second phase, however, he creates three. The method remains the same. However, there are more steps you need to take. You may end up with the stamina bar depleted, so wait with sprinting until the circle appears near you. 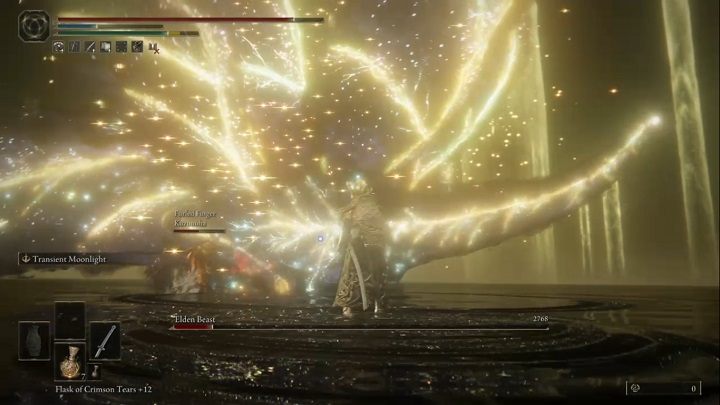 Also, get ready to sprint if you notice that the Beast is starting to accumulate holy magic. It can happen even when you are close. Once charged, the boss will fire a series of projectiles. Sprinting forward will allow you to avoid taking damage. 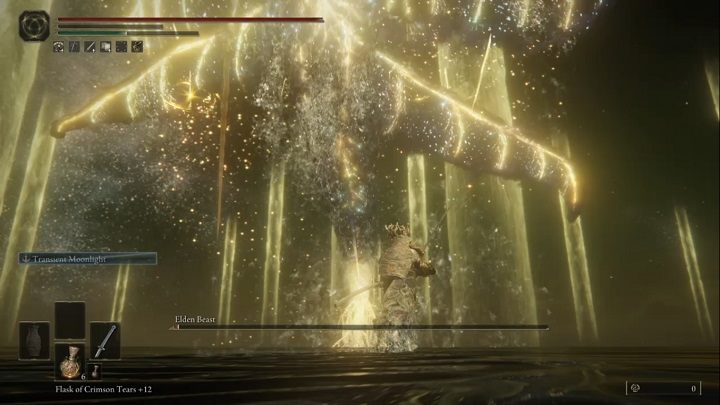 The enemy can also get airborne and fire a series of golden missiles again. Again - the solution to this is to run fast, avoiding the projectiles Fighting two opponents one after the other will put your skills to the test, but if you take advantage of everything the game offers and practice a little, you will be successful, and you've managed to live to the end of Elden Ring.