This page of the Elden Ring game guide contains tips on how to defeat the boss located in Elphael, Brace of the Haligtree. We're talking about Malenia, Blade of Miquella.

Malenia, Blade of Miquella is found in Elphael, Brace of the Haligtree. The fastest way to reach the boss is from the Haligtree Roots Site of Grace. 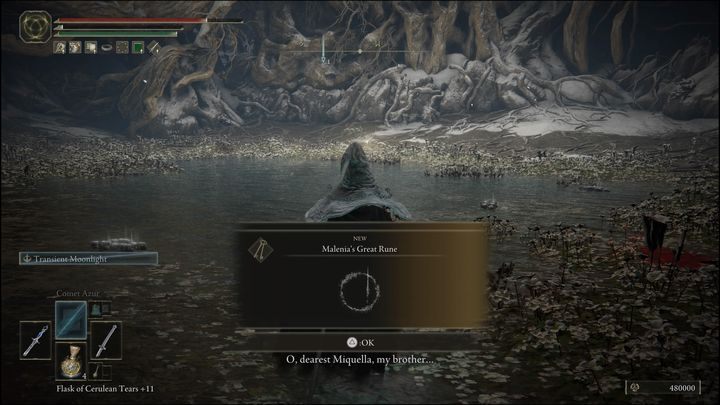 For defeating Malenia, Blade of Miquella, you will receive Runes (480,000), the Remembrance of the Rot Goddess and Malenia's Great Rune.

Before fighting Malenia, while playing as a mage, you'll find the Night Shard and Ambush Shardspells to be especially helpful. Malenia is a humanoid boss that is notorious for evading attacks. Since you'll miss her with most spells, equipping the aforementioned sorceries is your best option. Malenia won't be able to see them, thus she will be unable to avoid them (she will only do it once, after taking damage). 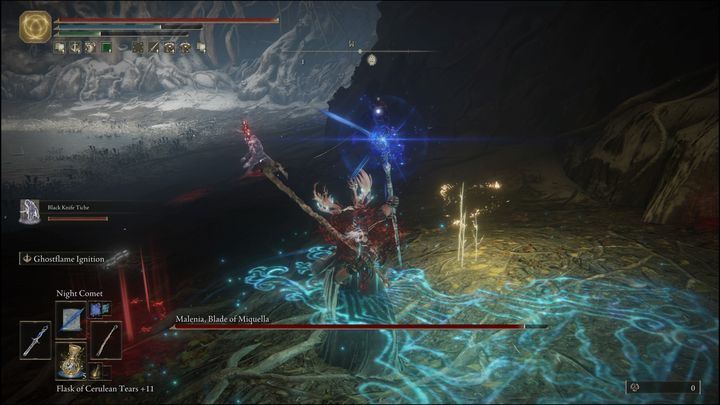 A good strategy is to hold down the spell charging button when using the Night Shard sorcery. As a result, once the first projectile lands, the second one will hit as well, dealing extra damage. For this reason, it's a good idea to equip the Radagon Icon talisman before the fight. This will increase the damage dealt when charging up your sorceries/incantations. 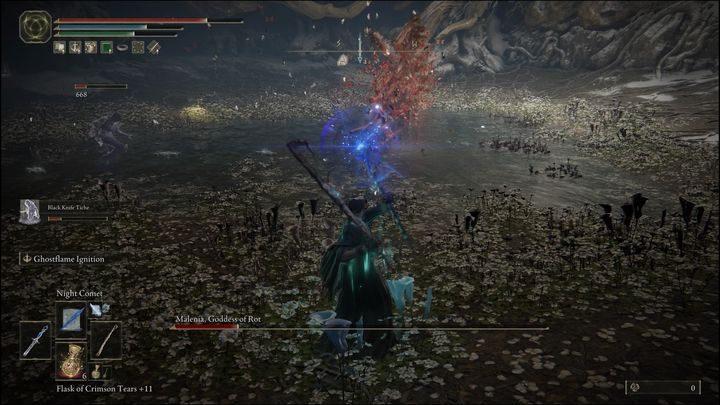 It's critical to control your position on the arena. Despite the arena being huge, you need to run in the opposite direction when Malenia slashes at you. Only your shield can save you if she uses this strike when you're close to the wall, which is why it's recommended to equip it even as a mage.

Fighting in the middle of the arena is a smart choice, because it lowers your chances of being pinned against the wall. 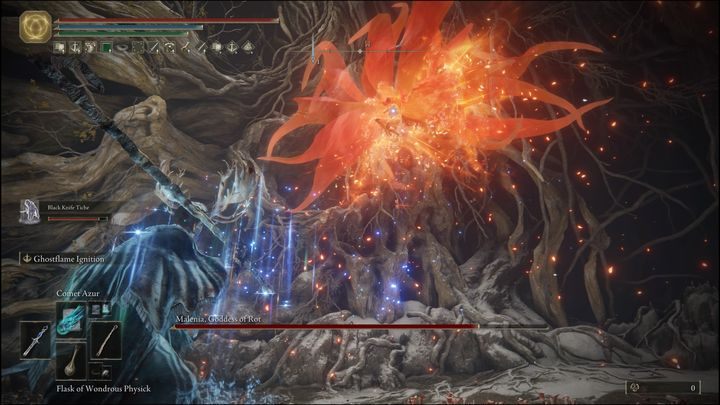 After defeating Malenia for the first time, the fight will proceed to the second stage. She will always start off this stage with an aerial attack. As a mage, it's best to drink a Flask of Wondrous Physick with a Cerulean hidden tear after the cut-scene is over.

Drinking the flask immediately after the cut-scene will ensure a perfect dodge after the end of the drinking animation, which will guarantee that you'll avoid Malenia's attack. 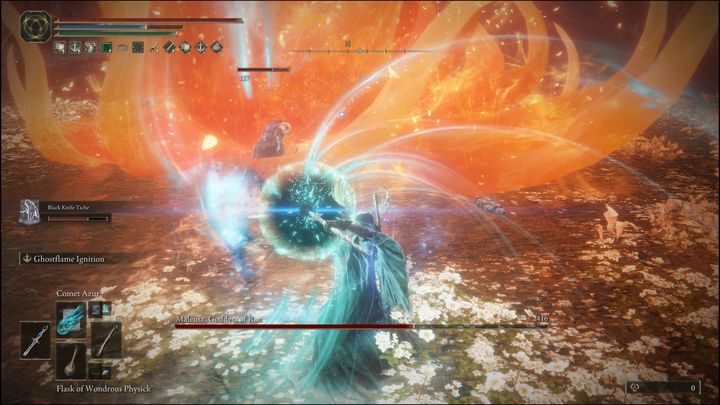 Retreat to a safe distance after dodging the mid-air attack, then cast Comet Azur. Malenia will remain stationary for 6-7 seconds, rendering her vulnerable to the Comet. She will take a lot of damage. However, don't stand too close since you'll end up taking damage from scarlet rot. The Comet will also start flying in different directions. 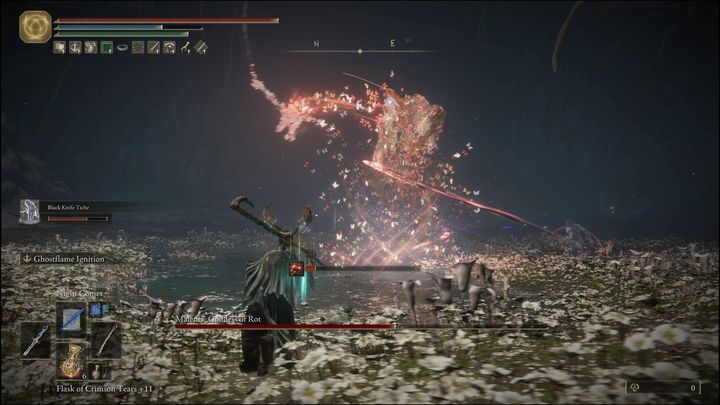 The fight will be much the same as in the first stage, except her attacks will apply scarlet rot. You should also keep an eye out for one additional move. Malenia will hover up slightly before creating clones of herself. When this happens, keep dodging to the left and right to put more distance between your character and her. 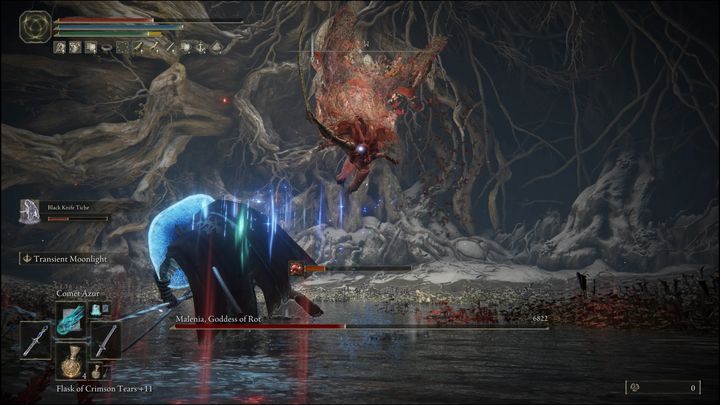 While keeping an eye out for Malenia's strikes, weave in some quick spells. During this stage, she is much more aggressive than before. Keep your distance while trying to stay in the center of the arena.

You will be attacked almost immediately after entering the arena. Malenia will most likely quickly dash towards you and deliver a series of horizontal blows. Be ready to dodge - ideally when your opponent starts swinging her weapon. Dodging is critical during this fight, because even if you deflect her attacks with a shield, the opponent will heal herself with each hit. This can both prolong the fight and make it more challenging. 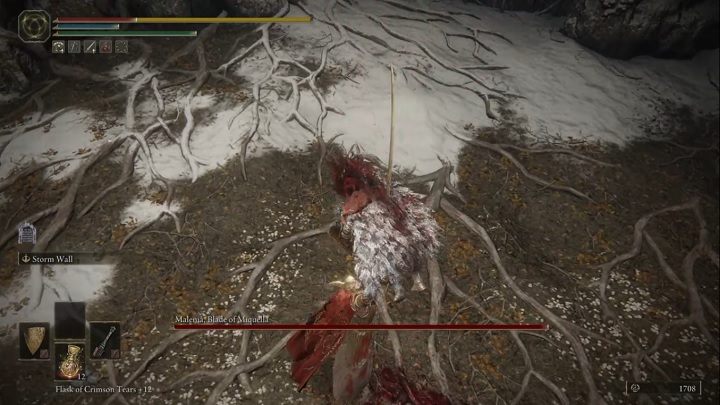 Watch out for Malenia's attack with her left hand. This indicates that she will attempt to grab you. If she succeeds, she will throw your character into the air and then stab you with her sword. This move is extremely damaging and, like all other attacks, restores the opponent's HP. The only way to avoid this move is to dodge it at the right moment - when she throws her elbow back. 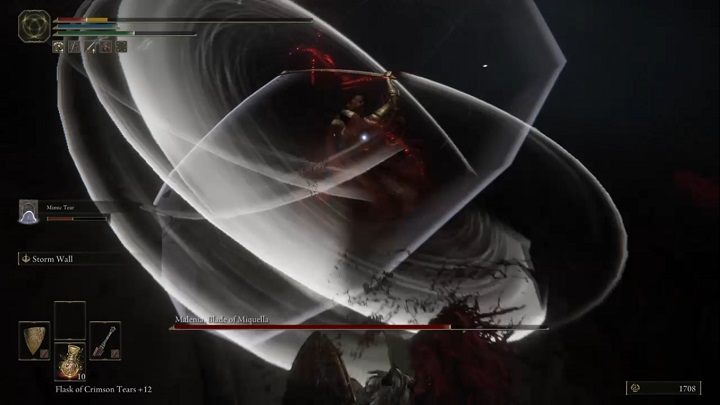 When you start attacking your opponent, you will find that your hits will interrupt most of her attack chains. As a result, it's best to keep attacking her for as long as possible to prevent her from retaliating. The one exception is when she uses a move that resembles a tornado of blows. You'll have to resort to dodging a few times. Malenia indicates this move by briefly hovering in the air and preparing to attack. If you pay close attention, you'll notice that Malenia makes pauses between subsequent attacks - in that moment, you should dodge once again. 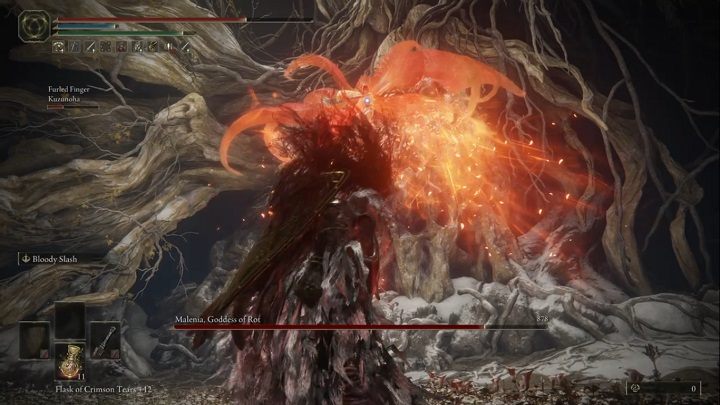 Once you have reduced Malenia's HP to zero, the fight will proceed to the second stage. Your opponent will start by launching herself into the air and making a devastating ground strike, which also inflicts the scarlet rot status effect. To avoid dying, sprint towards her; she will end up striking the location where you were just standing. She will pause for a while after landing, but attacking at this time may be to your detriment, because the enemy will then apply the scarlet rot status effect in the area around her. However, she will pause after a while, giving you the chance to land a few hits before she resumes attacking. 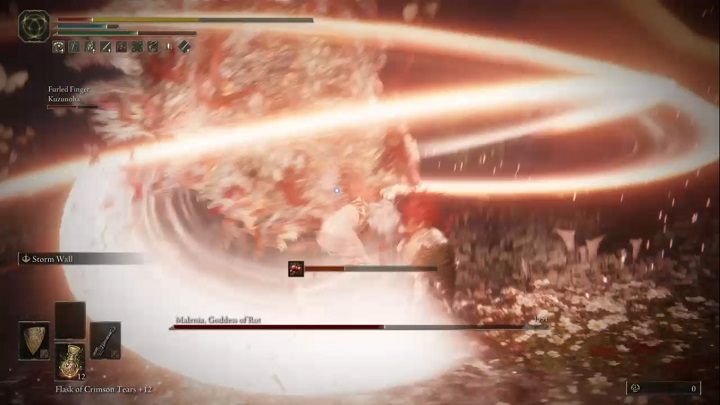 In the second stage, Malenia behaves much like in the first, although she is much faster and additionally she can inflict the devastating scarlet rot status effect. She will also attack with a flurry of blows during this stage, which is launched in the same way, i.e. by hovering in mid-air and preparing to attack. You can dodge it in the same way as before - first when she is about to land, then when her attacks cease for a moment. 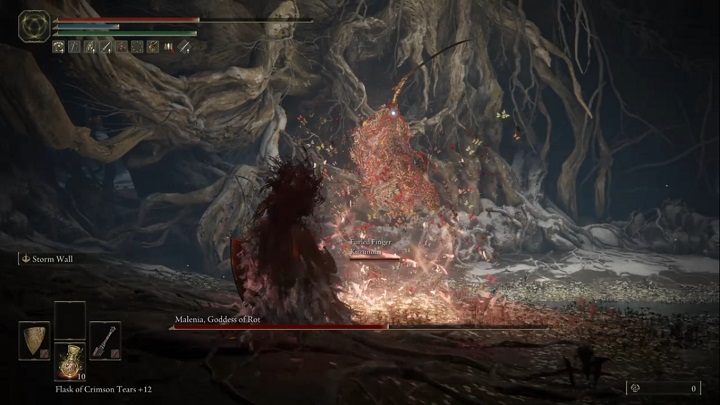 Malenia can also lift itself up and create duplicates, which will disappear after attacking. When they're all gone, Malenia will launch an aerial attack, but thankfully this won't be an area of effect move, so you may easily dodge it when the sword is about to connect with your character. 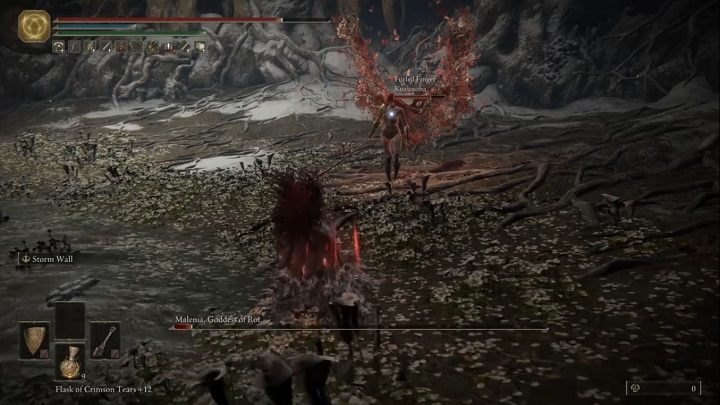 Fast and relatively long range weapons will prove invaluable throughout the fight. The Moonveil katana and its special ability Transient Moonlight will allow you to attack from a distance and break the opponent's poise. On the other hand, Rivers of Blood and the Corpse Piler skill will significantly speed up the fight, since Malenia is vulnerable to bleeding.