This page of the Elden Ring game guide contains tips on how to defeat Maliketh, the Black Blade, who initially appears as a Beast Clergyman, the boss in Crumbling Farum Azula.

Maliketh is in the Crumbling Farum Azula. The fastest way to get to the boss is from the Beside the Greatbridge Site of Grace. 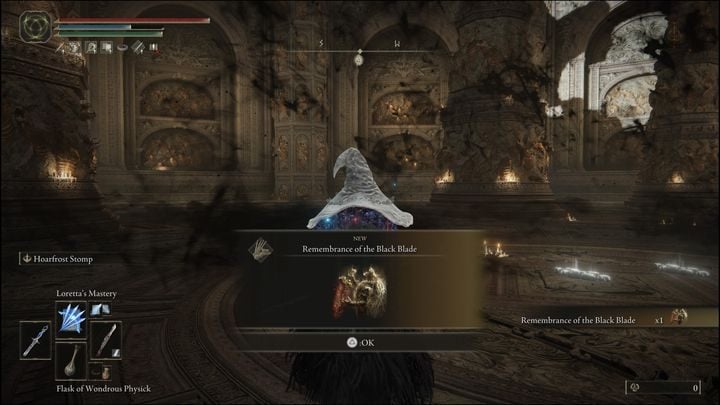 After entering the arena, it is worth going further in, mainly because there are chasms on the left and right sides that you can fall into while trying to dodge. 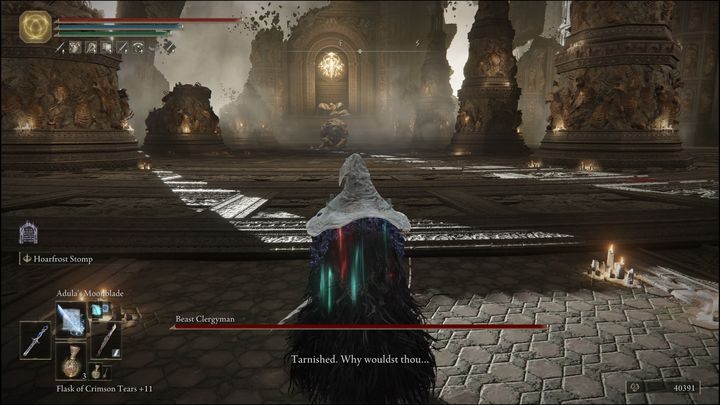 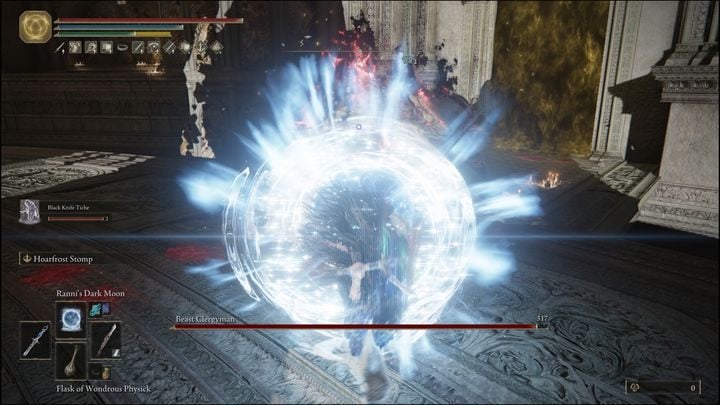 If you can use spells that require 70 Intelligence, cast, e.g. Comet Azur or Ranni's Dark Moon. By using a Flask of Wondrous Physick, combined with Cerulean Hidden Tear, you will be able to deal a lot of damage to the boss. 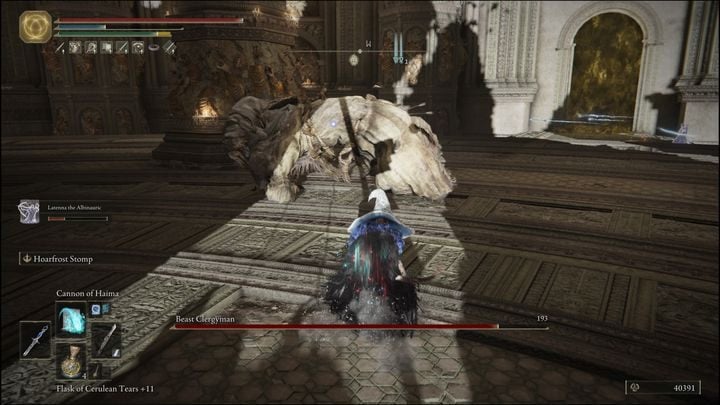 When the boss gets close to you, he will very often use quick slashes with a dagger. He often dodges during attacks, and when the animation ends, uses a rock slingshot. 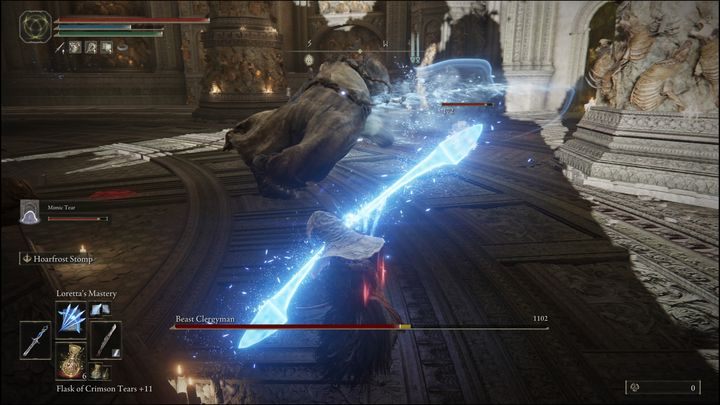 When the Beast Clergyman is busy fighting your summon, you can also use spells that deal high damage, but take a long time to cast, such as Loretta's Mastery or Comet Azur. 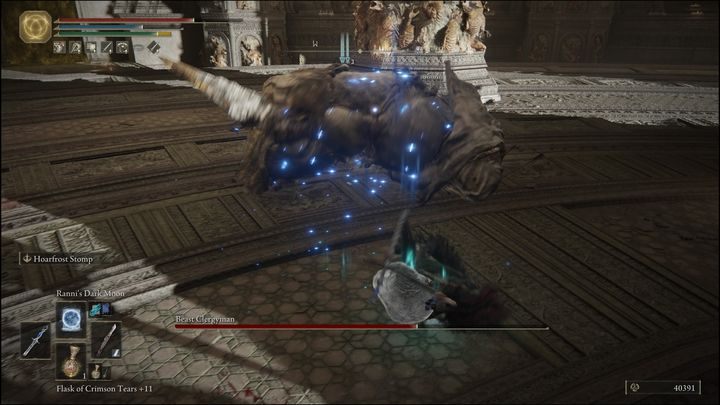 It is important not to get too close to him, as he has many area of effect and quick attacks, such as a beast claw spell that creates cuts in the ground around him. This attack deals a lot of damage, but a well-timed dodge will prevent you from taking any hits. 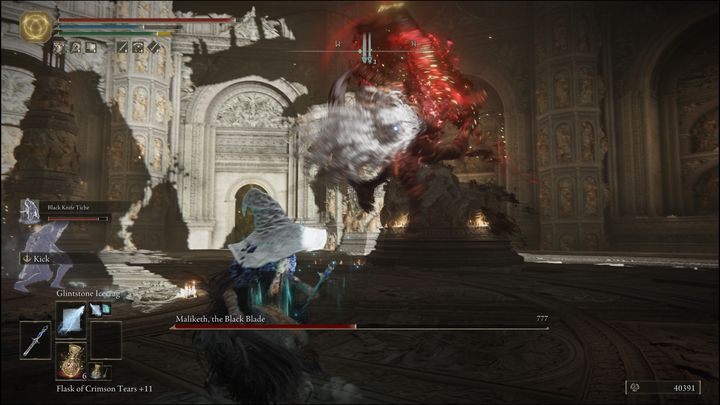 The second phase is the appearance of Maliketh. His attacks now have a much greater range, deal damage over time, and what's more, the boss gets more agile. He will jump a lot and stop in the air, creating red cuts. 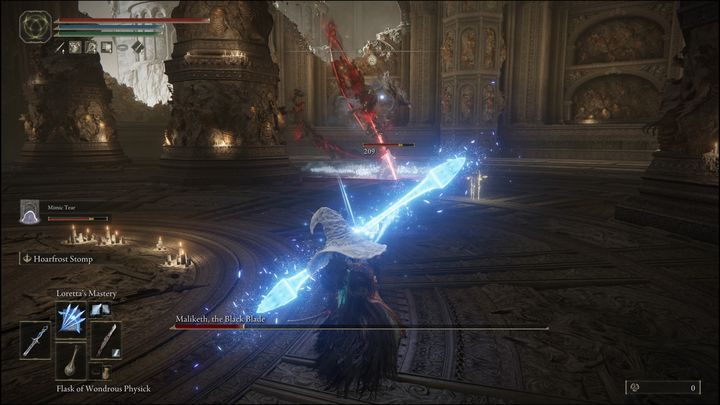 If you have trouble avoiding his projectiles, it is a good idea to hide behind pillars to get protection. However, some of the AoE attacks he creates upon landing have a range so long that you won't be safe behind the pillars.

Therefore, if he is far away, use fast, long-range spells while hiding behind the surroundings. When he is close, prepare for a series of dodges or run to safety. 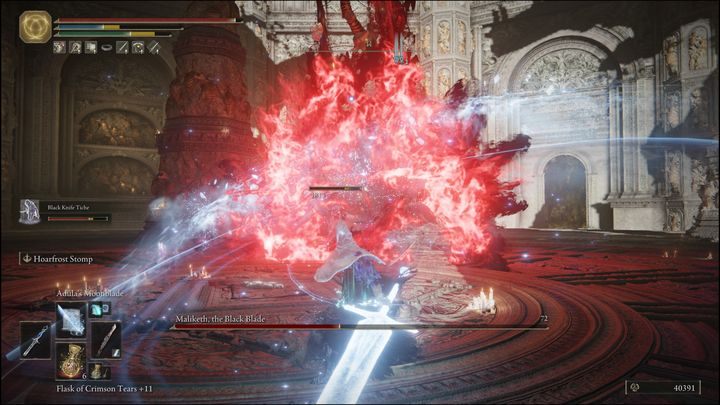 Very often, when Maliketh sticks his sword into the ground, he will create red and black flames. The attack range is large, so it's better to move away from him and punish the boss by casting Glintstone spells. If you take damage from the flame, keep an eye on your health bar as it will keep dropping for a while.

After entering the arena, go to the center as quickly as possible to reduce the risk of falling into the abyss. Keep a short distance throughout the majority of the fight and be sure to frequently dodge towards the boss to get behind his back. Hide behind the columns if you need healing. 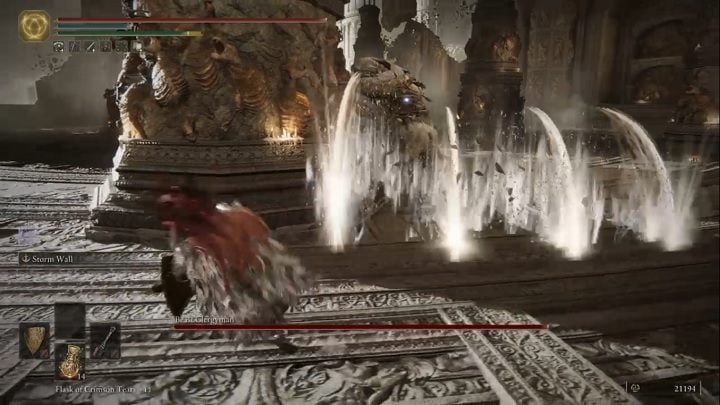 When you are at medium range from the enemy, he will often attack from a distance. It can be a magic attack that resembles a claw scratching the ground. When you notice that the boss is starting to use it, make one or two dodges to the side as the attack is quite wide. 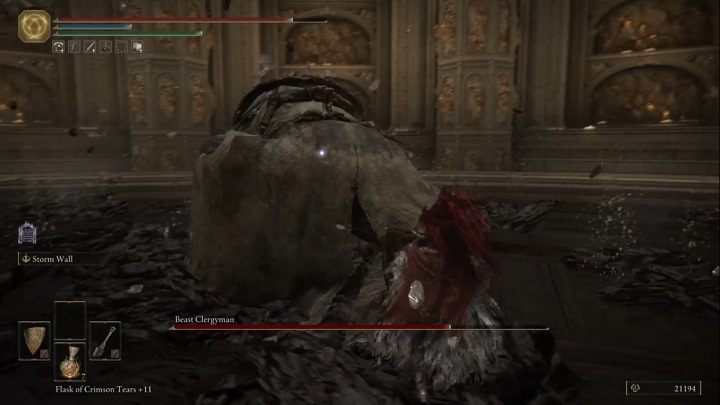 When the opponent takes the dagger in his teeth and holds his hands up, he will make an area attack with large rocks. Move away from him, but if you do it at the right moment, you will be able to land a few hits. 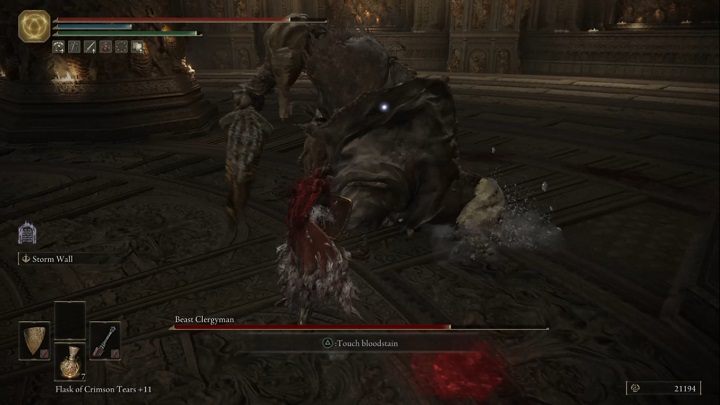 Most of the enemy's attacks in the first phase can be blocked with a shield. However, its not worth blocking the rocks - it is better to avoid them by rolling sideways. Many of the boss's attacks are slightly above the ground, so it is easy to jump over them and thus use up less stamina and, at the same time, let you perform a strong jump attack. Thanks to this, you have a chance to throw him off balance and deal a critical hit. 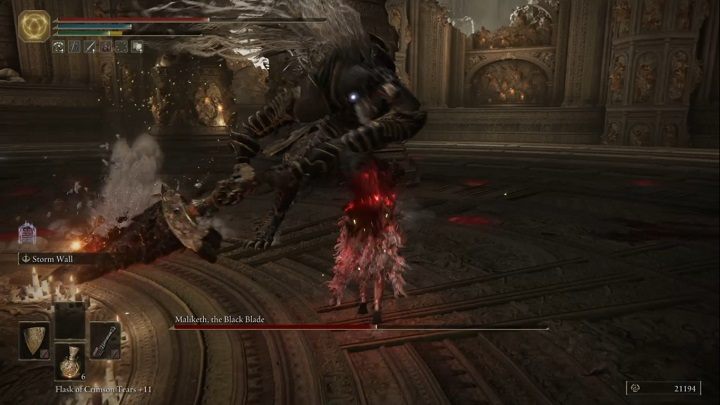 When you deplete half of your opponent's HP, a second, much more difficult phase of the fight will begin. Your opponent will now have a sword that deals extra fire damage - if you are hit, your HP will keep dropping for a while. So watch your health. 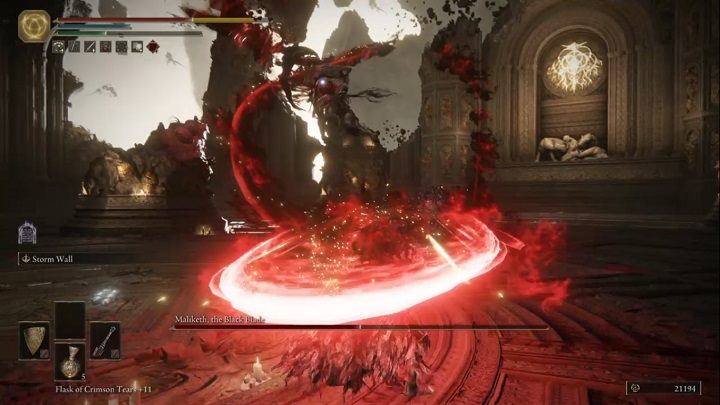 In the second phase, it is even more important to dodge towards the enemy and shorten the distance. When you move away from him, Maliketh will raise up and perform a series of magical ranged attacks, which can be deadly. These attacks are relatively easy to avoid by dodging when the magic cut is about to hurt you - remember that these attacks explode when they hit a surface, so it's not worth being next to a wall. At the end of such a series, the enemy will perform a fast attack by dashing towards you. 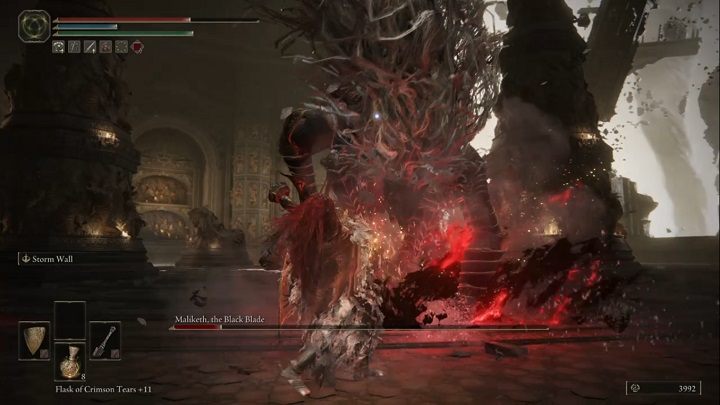 Sometimes the enemy will stick his sword into the ground and then cause a high-impact explosion. Dodging on the explosion will save your health points. Mimic Tears Ashes will be useful in this fight, but it's best to use them only in the middle of the fight. The enemy's attacks can quickly deplete the summon's health points in the first phase.