This page of the Elden Ring game guide contains tips on how to defeat the boss in Leyndell, Royal Capital, namely Fell Twin.

You will find the Fallen Twin between the Forbidden Lands and Leyndell, the Royal Capital . More specifically, the boss resides in Capital Outskirts. 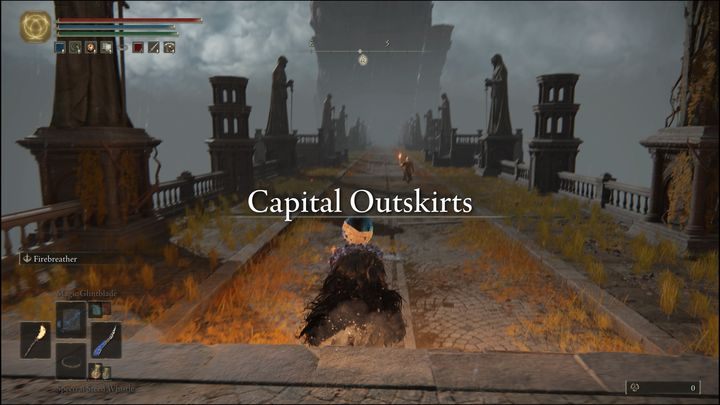 Instead of taking the elevator down to the Forbidden Lands, turn right and go to the walls. You will see one opponent there. By approaching it, you will be transported to the void. 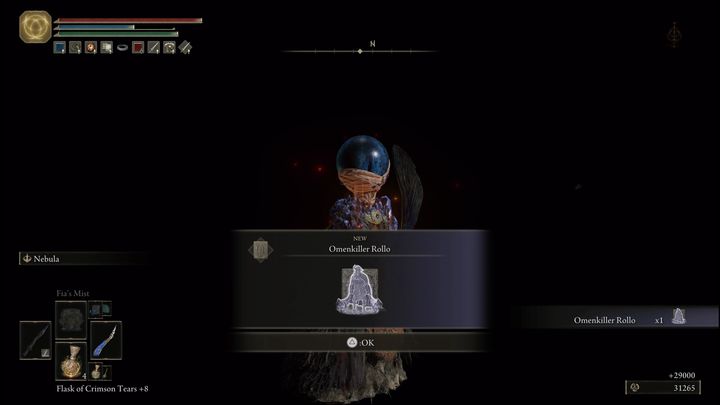 For defeating Fallen Twins, you will receive Runes (29,000) and Omenkiller Rollo Ashes.

After entering the arena, get away from the bosses and go the other way. In the meantime, prepare a few buffs or summons. It is important to move away enough to separate the two bosses and fight only one of them (preferably the twin with the ax at first). 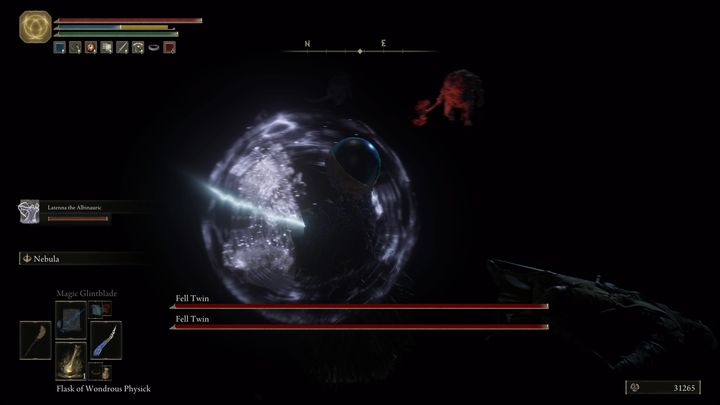 Then, when the boss is getting closer, cast a few quick spells at him, for example, Glimstone spells. You can also use slower spells, but it is worth using them only when the opponent is attacking. There is a good chance that if you use, for example, Comet Azur , the opponent will dodge this attack. 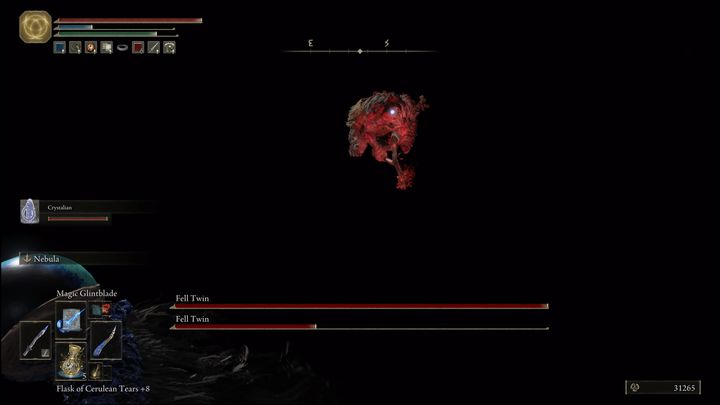 The attacks of the Twin with an axe are easy to predict. Only his charges can be troublesome. He expands his arms and starts running towards you, trying to grab your character. Run backward or dodge when he tries to grab you. 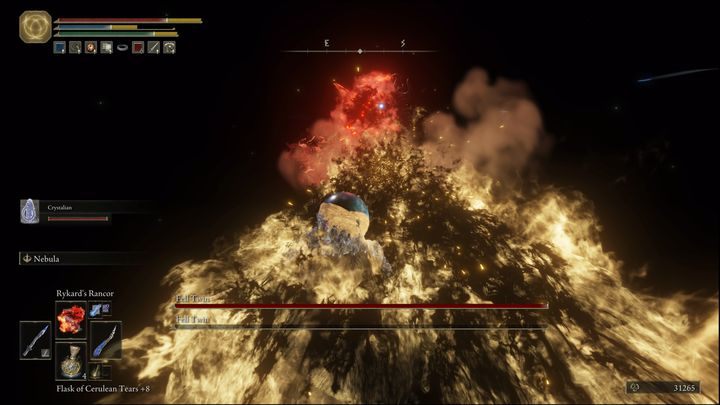 After defeating the first of the twins, approach the second. He will fight with a sword and ranged attacks. The moment you start to use a slower spell, the boss may use magic attacks, so perform such action while the boss is attacking, and you are sure that he won't hit you. 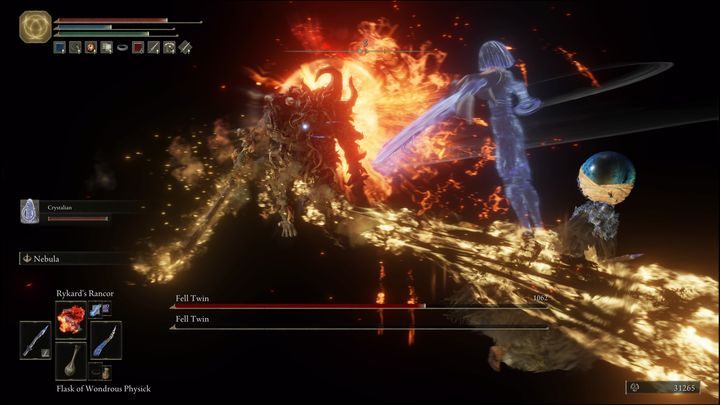 When you get close to the boss, he will switch to close combat and fight like his twin. His attacks deal slightly less damage, but have a slightly greater range. It's best to use faster spells and dodge to fight him.

Before you start fighting, run as far back as possible. Thanks to this, you will be able to focus on fighting one opponent at a time. When the second one begins to approach you, do the same again. However, bear in mind that the arena is limited. 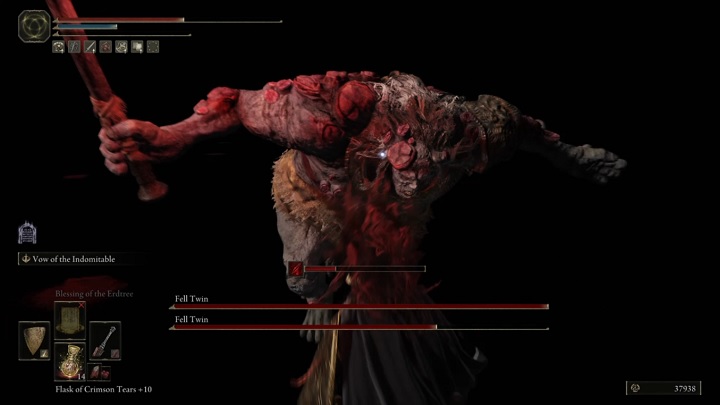 You will most likely be dealing with a Fell Twin wielding an ax first. Due to this, the enemy has a fairly short range, but nevertheless he moves quickly. One of his attacks is grab - to avoid it, dodge when the boss is about to grab you. 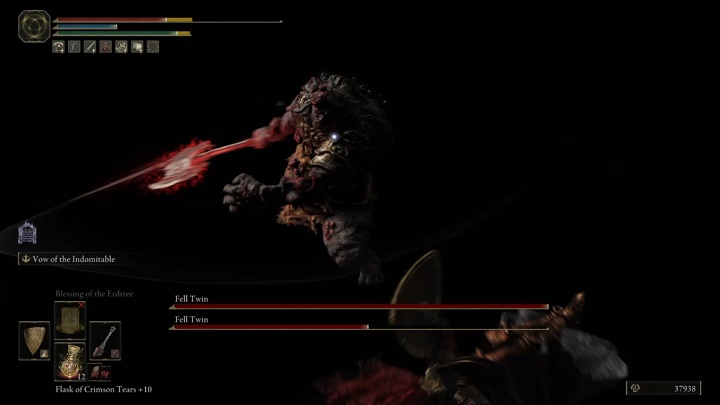 It's a good idea to dodge towards the enemy as often as possible. This way you increase your chances of getting behind his back. Thus, you will be able to safely attack a few times. 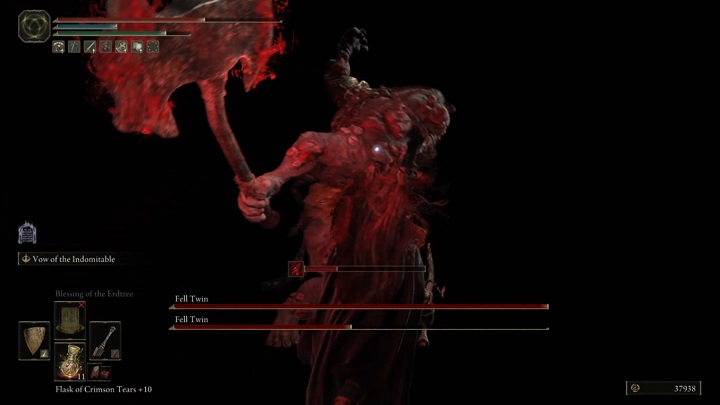 Watch out for the attack that starts by the enemy taking a swing with his free hand. The first attack knocks you off your feet and then the enemy will trample you. This attack deals quite a lot of damage, especially in combination with subsequent attacks that you may not escape in time. 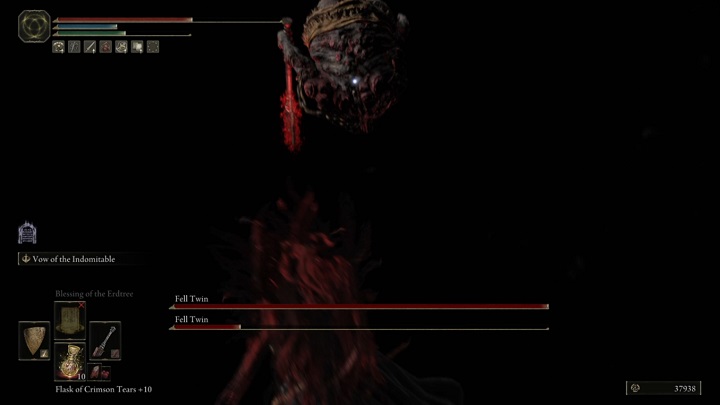 The Fell Twin also often makes a somersault and then falls to the ground. Luckily, it's not an area attack, so you don't have to worry about the range. It is worth avoiding this attack, because after the boss uses it, he will stay on the ground for a while, until he stands up. 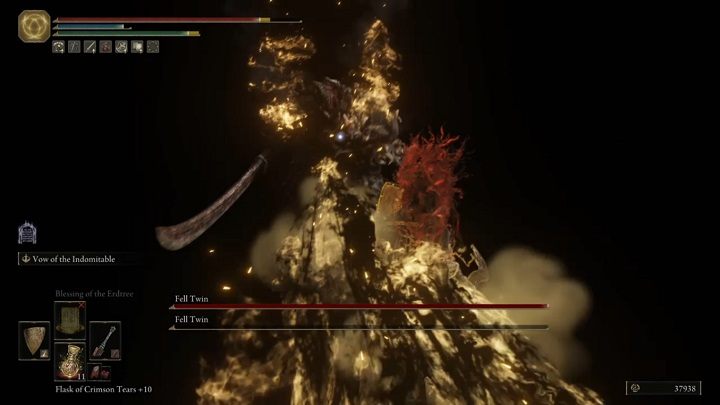 Before you get close to the second Fell Twin, he will attack you from a distance. The fire that he will shoot out will hurt for a while until it goes out. A well-timed roll to the side will be enough to avoid this. However, this can be problematic while healing, so replenish your HP after avoiding the series of attacks. Or you can sprint as far as possible. 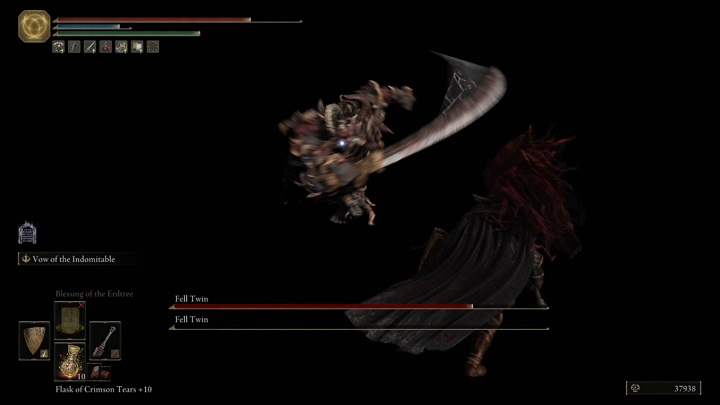 The second Fell Twin has a sword, so his attacks have a greater range and are slightly different from the former. The tactic, however, remains the same - with the note that you must beware of the sacred magic that the opponent uses. 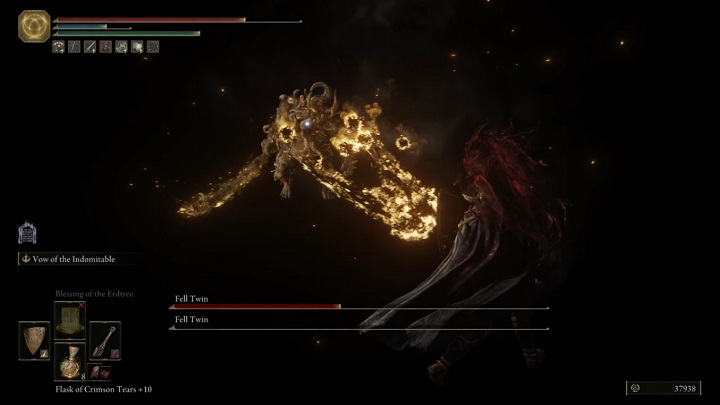 You should watch out when the Fell Twin burns with holy fire and throws projectiles. To avoid them, move sideways. At this stage, getting behind the opponent's back will be even more important, because he throws a lot of projectiles straight ahead.