This page of the Elden Ring game guide contains tips on how to defeat the Godskin Duo located in the northern part of Crumbling Farum Azula region, the Dragon Temple. 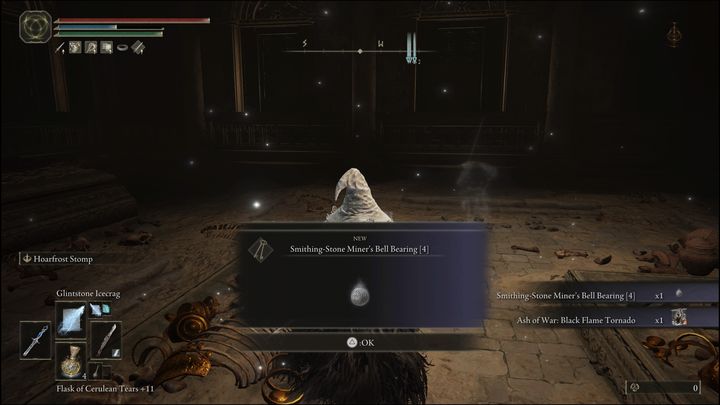 Before entering the arena, rest at a Site of Grace, then equip spells that deal AoE damage or pierce the target. If you don't have too much intelligence to use more powerful spells, use the Shard Spiral, Glinstone Arc, Adula's Moonblade or the Carian Greatsword. 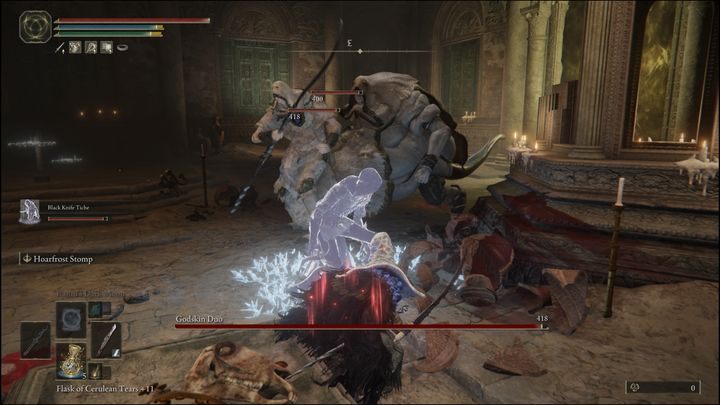 In case you have around 60-70 Intelligence, it would be a good idea to equip spells such as Comet, Comet Azure, Rykard's Rancor, Ranni's Dark Moon, Rennala's Full Moon and/or Meteorite of Astel.

What's more, while preparing, mix Wondrous Physick by adding the Magic-Shrouding Cracked Tear and the Cerulean Hidden Tear. This will allow you to increase your magic potential without losing any mana for 10 seconds after drinking the potion. 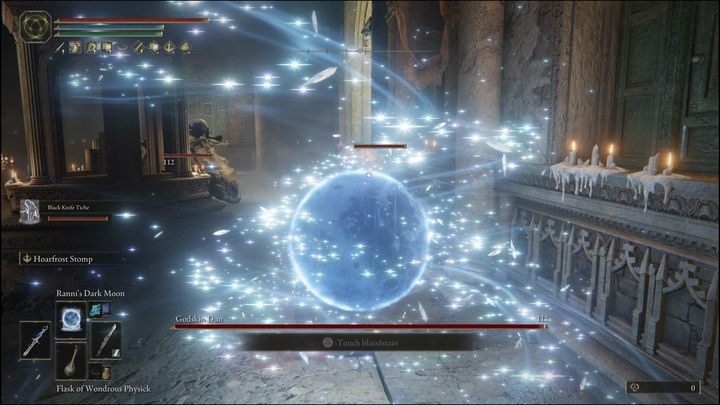 Then, after entering the arena, stand near the left side, at the last column. Try to make the bosses line up so that most of your spells will hit two enemies at the same time. Before using spells, summon the appropriate Ashes for help. 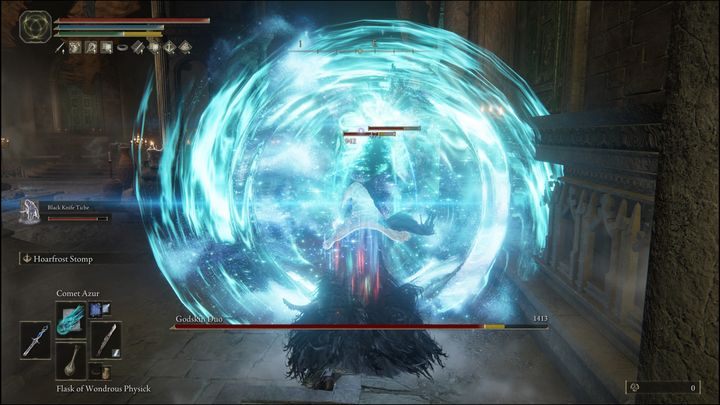 Once you are in the right place, drink the Wondrous Physick. Then, when the bosses are close to each other or in a straight line, use powerful spells such as Comet Azure, Rykard's Rancor or Meteorite of Astel. 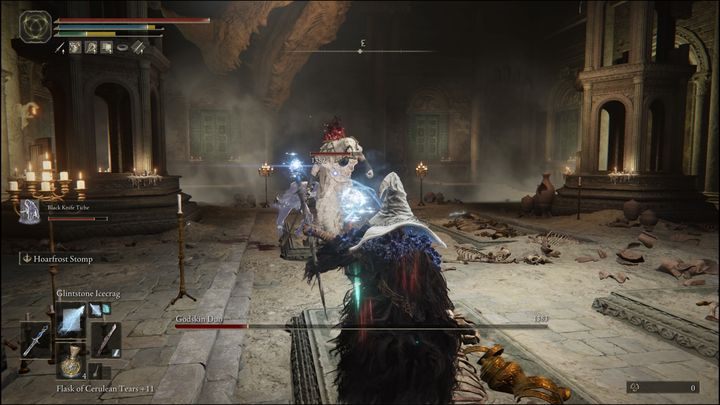 If you don't have these spells, use the weaker version of AoE spells. You won't deal as much damage as with the stronger ones, but it's still a good alternative. 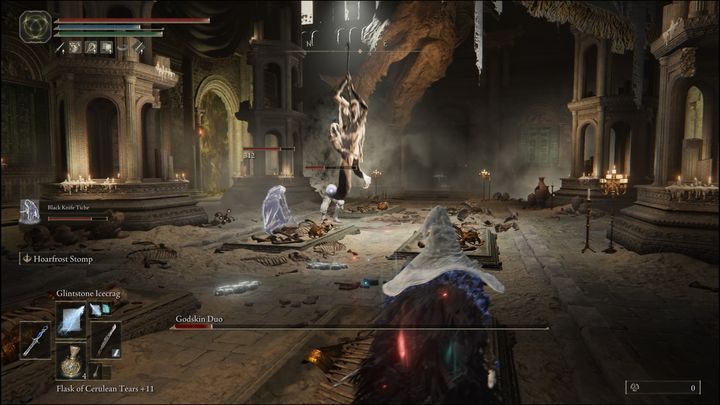 If you kill one of the bosses, you will have some time before the next one appears. Remember that the smaller version of the Godskin boss, when his HP drops below 50%, gains a greater range of attacks by extending his body. On the other hand, the bigger version of the boss will roll much more often and increase in size.

Remember to hide behind the pillars as often as possible. They will protect you from most dangerous attacks (but not all). Do this mainly when you want to heal yourself. Bosses often cast a black flame ball when you heal close to them - a pillar is able to block the projectile.

To make the chances a little bit more even, use Ashes - for example the Mimic Tear Ashes. Then separate the opponents so you can focus on a different target than your companion. You should also be as aggressive as possible so as not to prolong the fight and not risk the death of the summoned spirits. 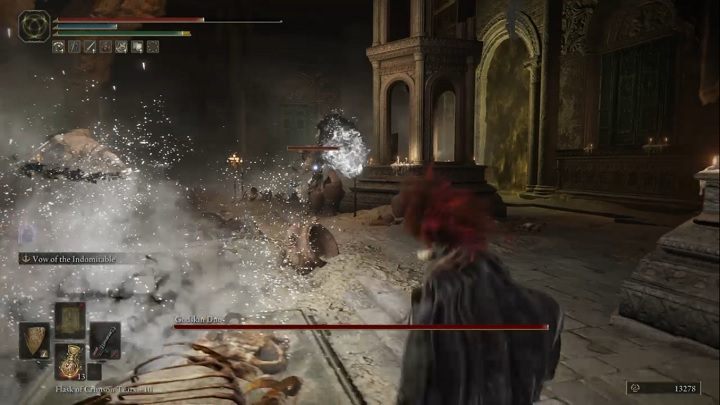 Watch out for the fire spell cast by the enemies. It deals a lot of damage on impact and keeps hurting you until it goes out. Therefore , use the columns in the room as often as possible. They will protect you against attacks and help with healing. 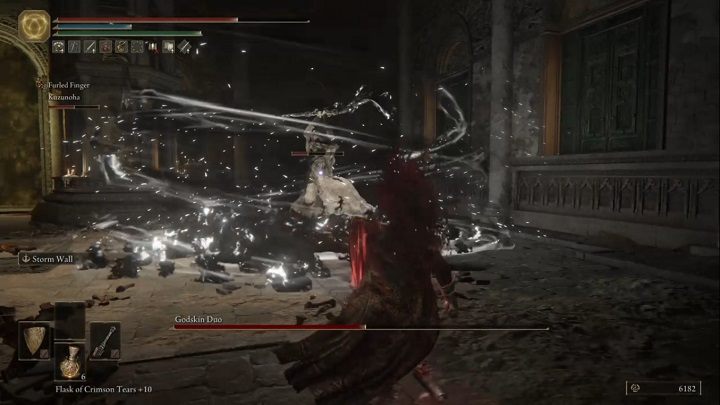 Keep in mind that the opponents' behavior will change when their individual health bars are halved. Their shared HP bar does not matter here, so if you are playing without companions, deal with one enemy at a time, so as not to make the fight more difficult. 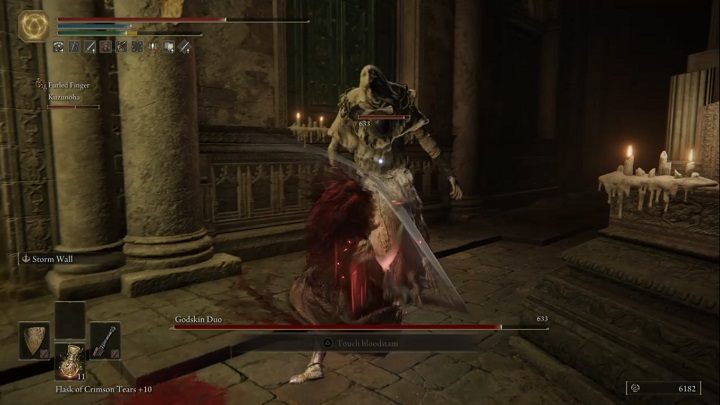 The key to victory is to keep an eye on the enemies, because even if you separate them, the other one will approach you quickly or attack with fireballs. So you have to make twice as many dodges as you would otherwise have to do. The columns in the room will also be destroyed if one of the bosses goes into the second phase - if that happens, you will probably have to move to somewhere else. 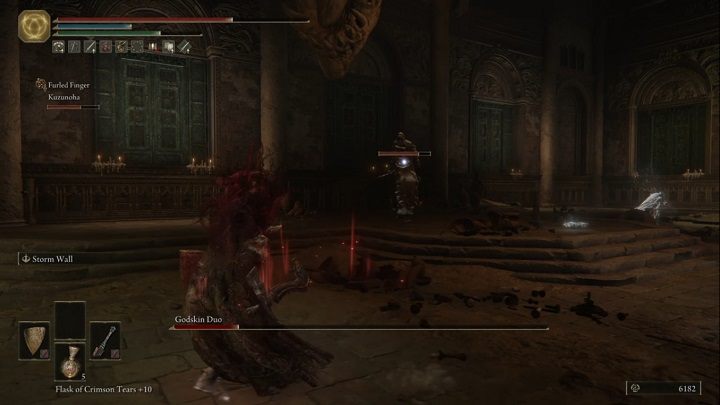 The fight will end when you deplete the main boss bar - before that, you will have to defeat enemies over and over again. If you eliminate one of them, you will gain a moment when you can focus all your attention on the other enemy. Then it is good to make him lose balance and perform a critical hit. This is one of the toughest fights in the game, but it can be done, especially if you take advantage of the possibilities offered by Elden Ring.