This page of the Elden Ring game guide contains tips on how to defeat the boss in Siora River, namely Mohg, Lord of Blood and Mohg the Omen.

Mohg is in the underground location called Siofra River. To get to his palace, you need to complete a quest from NPC called White-Faced Varre. Thanks to him, you will receive the Pureblood Knight's Medal, which will take you to the location where Mohg, Lord of Blood, resides.

In addition to Mohg, Lord of Blood, you can encounter his weaker version. It is in the Subterranean Shunning-Grounds. The fight with him is similar, but there is no second phase. Mohg the Omen is immune to all kinds of negative statuses. So you don't need a bleeding weapon or anything like that. You can use Mohg's Shackle on him - but only twice, in the early stages of the fight, before his HP is reduced to half. The shackles will keep him in place for a moment, just like in the case of Margit and Morgott.

To get to the Subterranean Shunning-Grounds, you must go to Leyndell, Ashen Capital. Once you reach a Site of Grace called Leyndell, Capital of Ash, head southwest and go down the slope. Soon you will see a hatch in the ground. Unfortunately, there is no ladder here, so you must carefully jump down onto the platforms. In Subterranean Shunning-Grounds, you will reach a Site of Grace called Forsaken Depths. Mohg, the Omen will be waiting for you a bit further. You can fight him with the help of other players or summoning ashes. 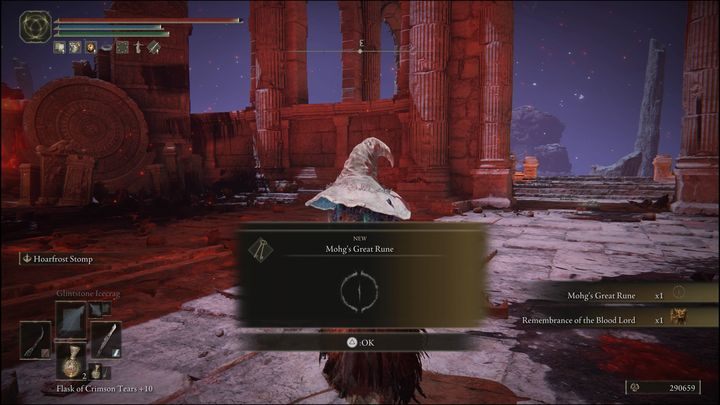 For defeating Mohg, Lord of Blood, you will receive Runes (420,000), Mohg's Great Rune, and Remembrance of the Blood Lord. 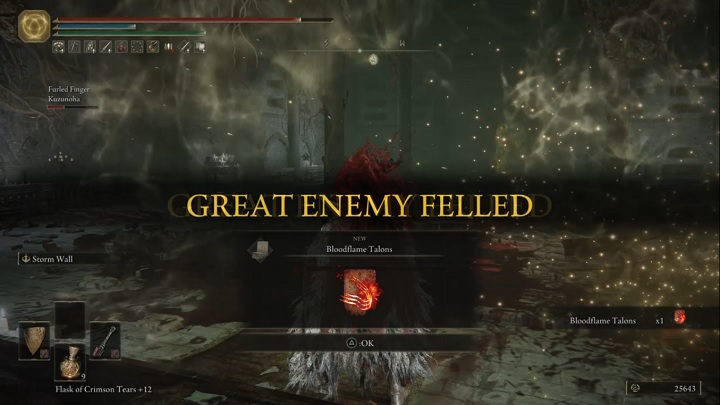 For defeating Mohg the Omen, you will receive Runes (75,000) and the Bloodflame Talons incantation. Nearby, in the chest, there is also Erdtree's Favor 1. It is an amulet that increases the maximum HP, stamina and load capacity.

Before entering the arena, be sure to select two specific tears for Flask of Wondrous Physick: Cerulean Hidden Tear and Purifying Crystal Tear Thanks to this, you will protect yourself from the curse and will be able to use spells for 10 seconds without consuming mana. It is also worth having 60 points of Intelligence to use Comet Azur in the fight. 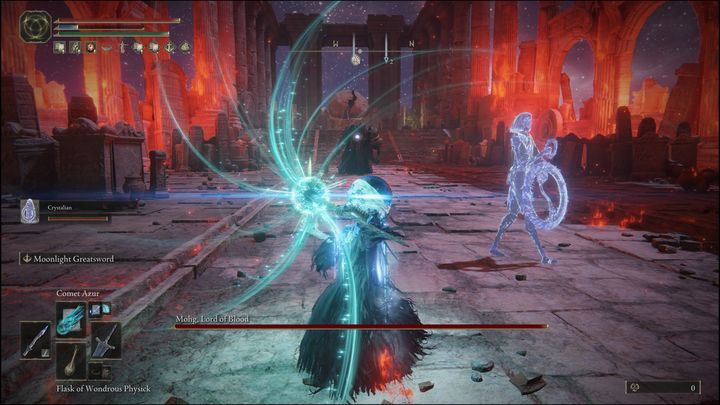 After entering the arena, summon the Spirit Ashes to make the boss fight easier. A good choice would be Black Knife Tiche and Crystalian. You can also use the Ashes of Jellyfish or the Mimic Tear.

Then, drink the Flask of Wondrous Physick and use the Comet Azur spell. Hols the spell till the very end, until your mana runs out, or the boss comes close enough to attack you. Thanks to this, you will be able to take him more than half of his HP bar. 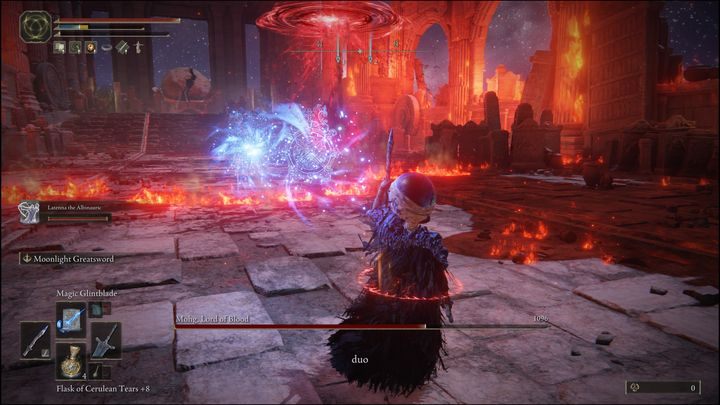 However, if you can't use Comet Azur, use the charged Magic Glintblade spell. Before the boss gets to you, use as many magic arrows as possible to deal a lot of damage. 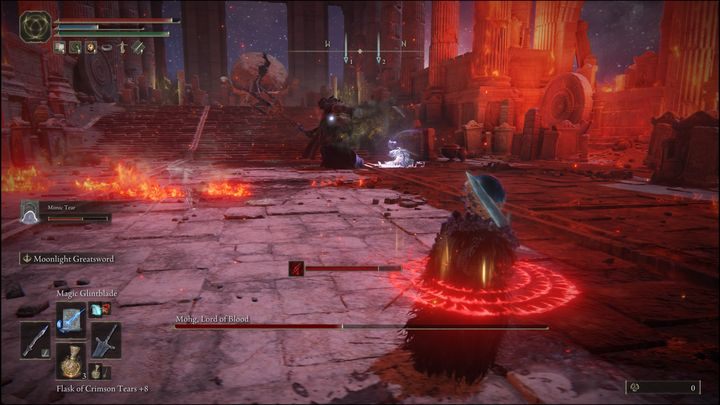 Mohg has several melee attacks that can reach you even if you keep a fair distance between you. However, they are not so fast and they are easy to dodge. It is important not to stand in front of the boss because he will make a fiery explosion after a short while. 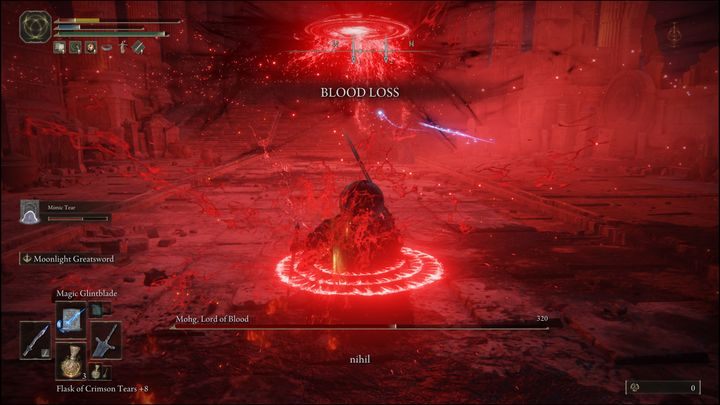 When the boss's health drops to around 50%, and you have three red circles around your character, he will start chanting the word Nihil three times. After each word, one red circle will disappear, but you will take a lot of damage. Additionally, Mohg will heal himself and recover a cerain amount of HP. If you don't the tear removing from the curse, heal between the second and third Nihil to survive the attack. 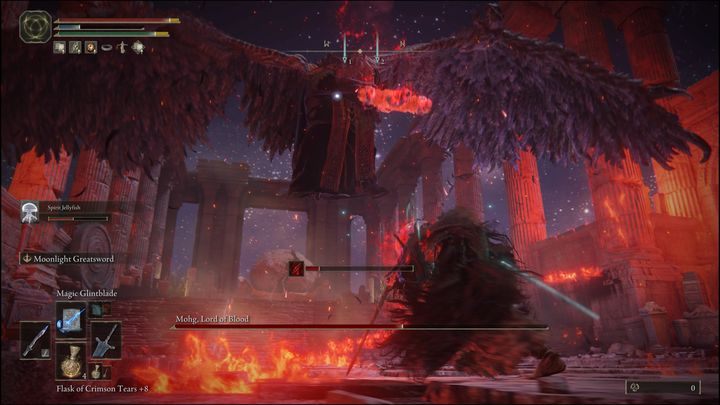 In the second phase, Mohg will gain speed, and he will rise into the air using wings. From now on, most of his attacks will have fire and blood spray. Even if you avoid the attack, there is a good chance you will receive some damage - so it is better not to stay with low HP for too long, as you may die because of it. 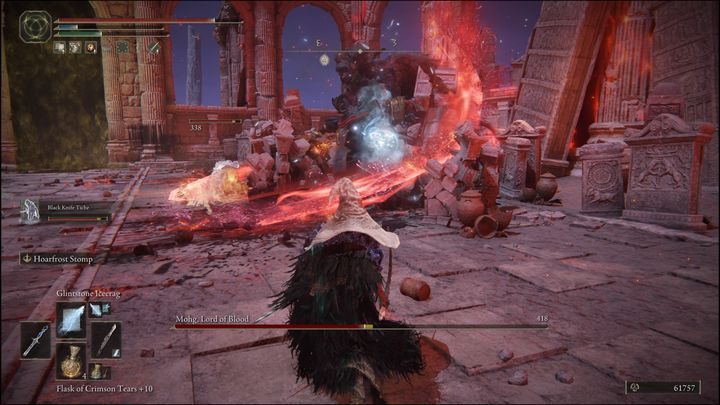 If you notice that the attack will leave a bloodflame spray, stay away from the boss. After a while, this flame will explode, dealing blood and fire damage. Instead, use spells while keeping the distance between the character and the boss. 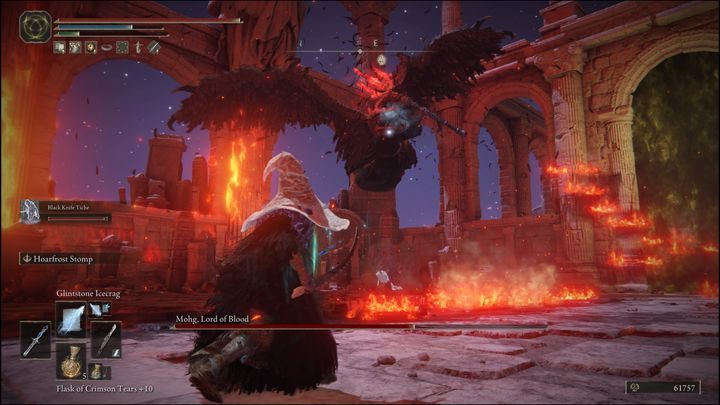 Watch out mainly for the attack in which the boss rises into the air. After a while, he will get close to you and attack with his weapon. Dodge forward to get behind his back and continue casting spells at him.

It is best to end the fight with Mohg as soon as possible . Therefore, after starting the fight, reduce the distance quickly and attack. The opponent is vulnerable to bleeding, so the best weapon will be one that inflicts this type of status. If you additionally use the Mimic Tear Ashes, you may be able to finish the fight before moving on to the second phase. 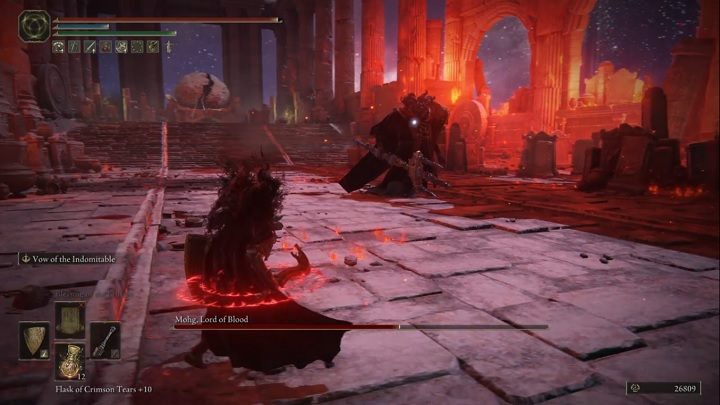 During the fight, you can notice a round seal on your character, which means that boss has inflicted a curse on you. To protect yourself from it, you can use a Flask of Wondrous Physick with a Purifying Crystal Tear. Thanks to this, entering the second phase will not be so tough.

In the first phase, the enemy attacks mainly with his trident, dealing physical damage. These attacks are fairly easy to avoid. Mohg swings his weapon, and the best way to avoid it is to dodge right after the enemy's attack. Many combos start similarly but end differently. You should watch out for the attack in which the enemy sticks the weapon into the ground. The boss will deal damage by pulling it out. 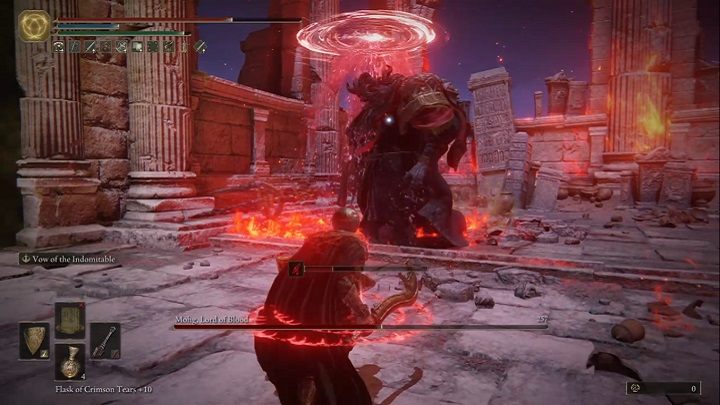 In addition, it can also "spray" fire that will hurt your character and build up bleeding. Most often he does it around himself or forward. This attack is indicated by a ring above his head. At this moment, he is the easiest to knock out, and you can use this opportunity to deal a critical blow. Stick to its left side because it will be easier to dodge the trident's attacks.

The second phase will begin when you deprive the boss of half of his HP. This is the best time to become as aggressive as possible and deal as much damage as you can. This way, you can end the fight even before entering the second phase - especially if you fight in cooperation mode or with the Spirit Ashes mentioned above. 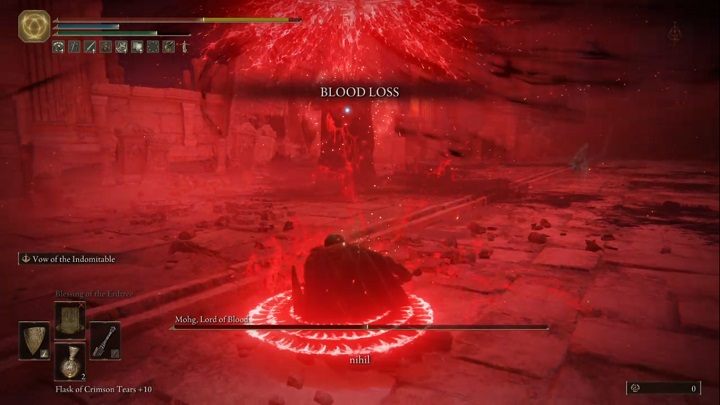 However, if you are not lucky, the boss will curse you and this dangerous attack can deal you damage 3 times. To survive, you have to heal between each "Nihil" spoken by the opponent. You can also risk and do it between the second and third "Nihil" and deal some damage to the enemy - especially if he has little HP left. 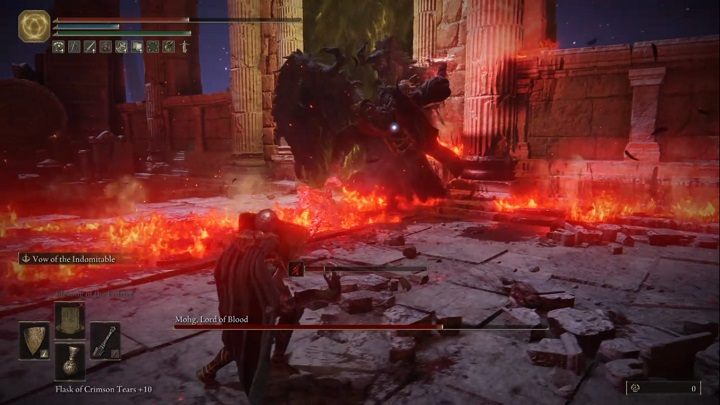 The second stage of the fight is particularly demanding - the opponent sprays a lot of fire all over the arena. Each swing of his weapons is another dose of fire. This makes it difficult to move around and greatly increases the chance you will fail. Therefore, move carefully, keeping a close eye on your surroundings. It's easy to get into a fire for too long, leading to a significant loss of HP. It's impossible to avoid it for too long, so keep an eye on the bleed meter. 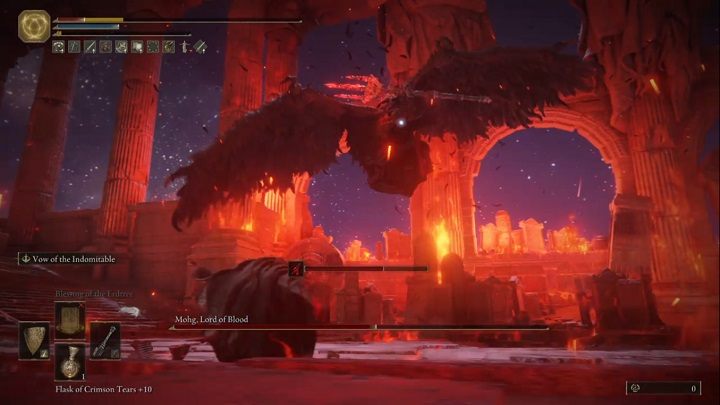 The enemy often rises into the air, spreads bloodflame in front of him, and then lands with a powerful weapon swing. Dodge towards him to get behind his back or to his left as often as possible. That way, you will avoid fire and attacks with a trident, and you will be able to deal some damage. 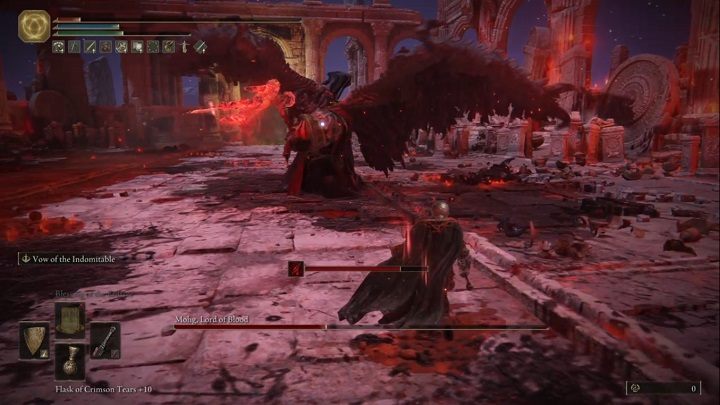 Also, watch out for the enemy's charge - it's quite easy to avoid it by dodging to the side. It is important not to be in front of the opponent because he will also spray some fire after charge. In addition, the attack with sticking the weapon into the ground is now more dangerous than in the first phase. When the boss pulls it out, it will cause an explosion.