This page of the Elden Ring game guide contains tips on how to defeat the boss in the Mountaintops of the Giants, namely the Fire Giant.

The Fire Giant is in the GMountaintops of the Giants region, more precisely, very close to the Site of Grace, Foot of the Forge. You have to go through the big chains that serve as a bridge to the boss arena. 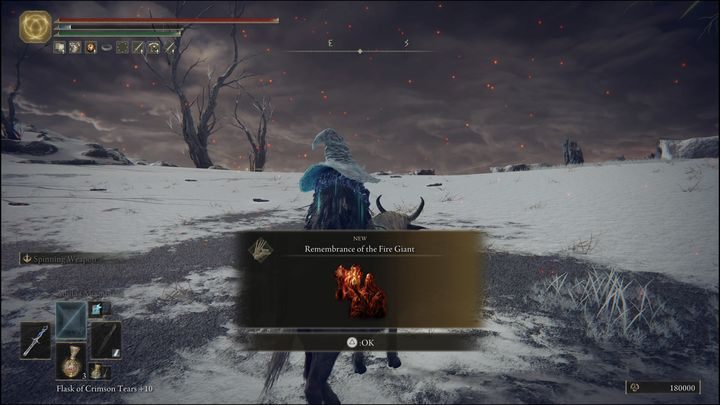 Before the fight, it is worth investing in spells that deal frost damage. We are talking about spells such as Adula's Moonblade or Glinstone Icecrag. A weapon that deals frost damage will also be useful. It can be any weapon with the Ashes of War Hoarfrost Stomp or, for example, the Dark Moon Greatsword or the Icerind Hatchet, which automatically has the Hoarfrost Stomp. 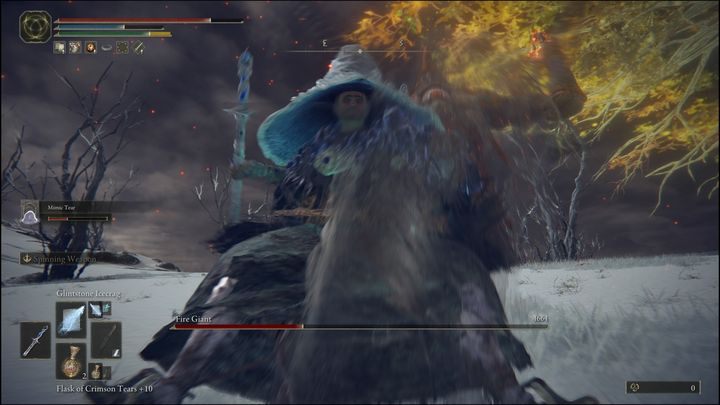 The moment you enter the boss arena, summon Black Knife Tiche, and then ride on your mount towards him. In this fight, you should shorten the distance between you and the boss as quickly as possible. Thanks to this, he will not use his stronger attacks, such as stomp, which deals a lot of area damage and is very difficult to dodge. 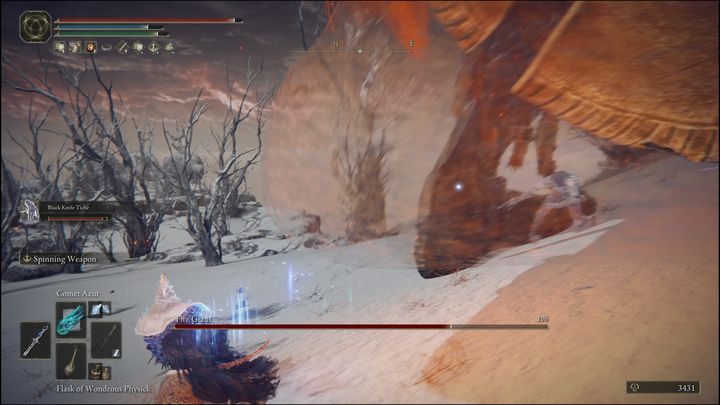 Once you are close to him, dismount and then attack his left foot. After a few hits or spells that deal frost damage, you should significantly deplete his health bar. Also, you will stun him for a while. 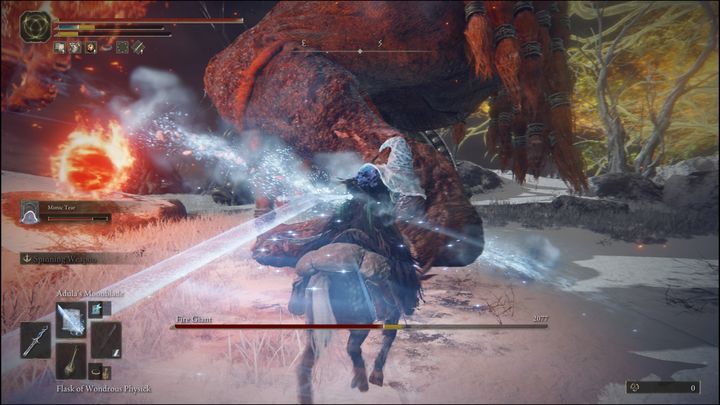 When the Fire Giant starts rolling to get away from you quickly, mount your horse and get closer to him. Attack with frost spells. Adula's Moonbladee may be useful. Especially when you use it in such a way both the blade and the projectile hit the target.

Thanks to this, the boss will receive cumulative damage. You will also impose the frostbite status faster. 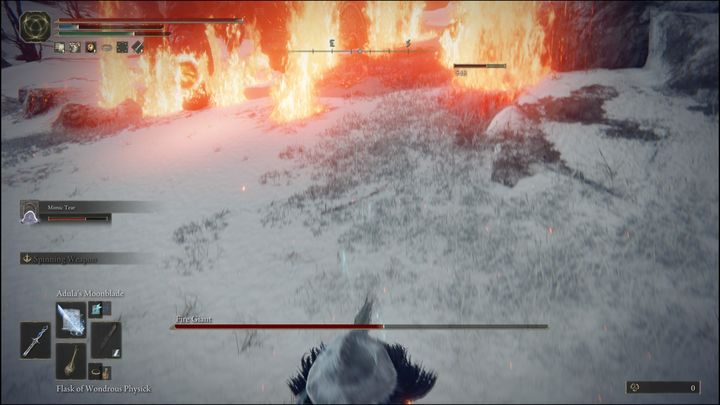 The second phase of the fight is characteristic. First, the boss will make the ground take fire. It is a good idea to keep your distance because the damage from this attack can be lethal for you. Playing as a mage, you can mount the horse and use the Glintstone Icecrag spell until the fire goes out.

However, keep in mind that the range of this spell is not very great. Stand close to the fire while being careful that it does not reach you. 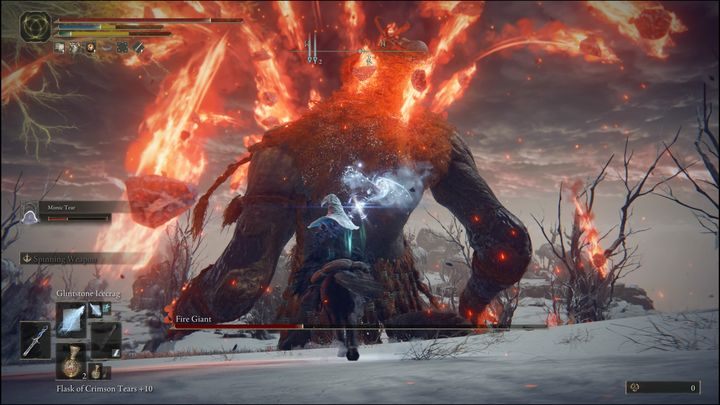 After a few seconds, the fire will extinguish, and the "second phase of attack" will begin. Fire rocks will emerge from the body of the Fire Giant. It is an area attack, but it shouldn't hit you if you shorten the distance between you and the boss. Stay as close to him as possible. 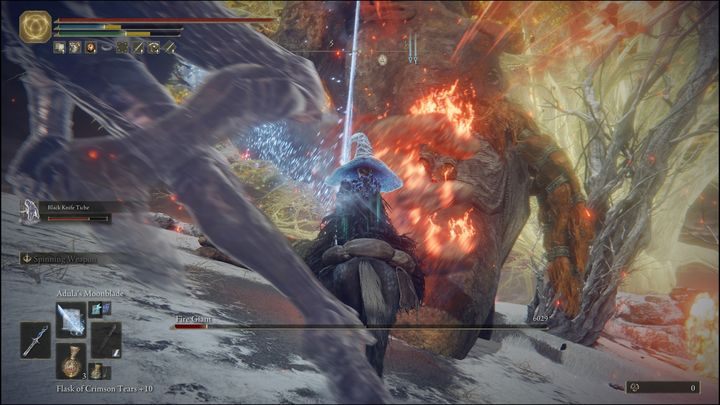 This is also a right time to use Adula's Moonbladee again. After casting a few such spells, the boss should die from attacks and frostbite. Remember that you can use this spell while on a mount.

Start the fight by using your mount, but only to get close to the boss. It is impossible to dodge the giant's attacks while on horseback. The only way to avoid it is to do a roll at the right moment - when his attack is about to hit you. 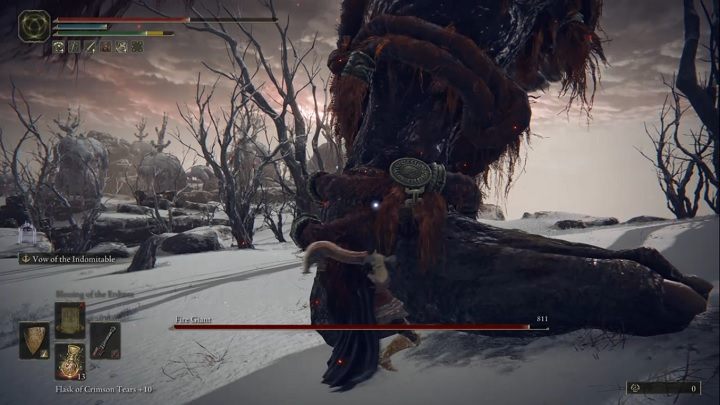 For the first part of the fight, stay close to the giant's left leg and attack it as often as possible. After taking about 20% HP of the boss, he will lose the bandage and stop for a moment - this will allow you to perform a series of attacks. 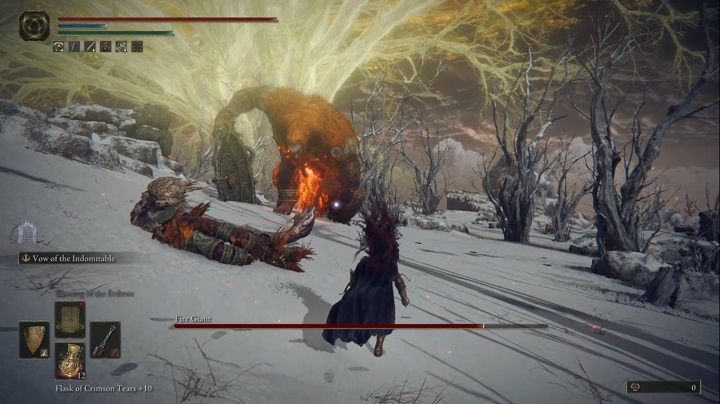 From now on, the enemy will use fire attacks. The first is a fiery orb that slowly follows the player. It explodes after a while, so try to stay as far away from it as possible. The second attack is exploding pillars of fire. The places where they appear will be illuminated, so avoid them. 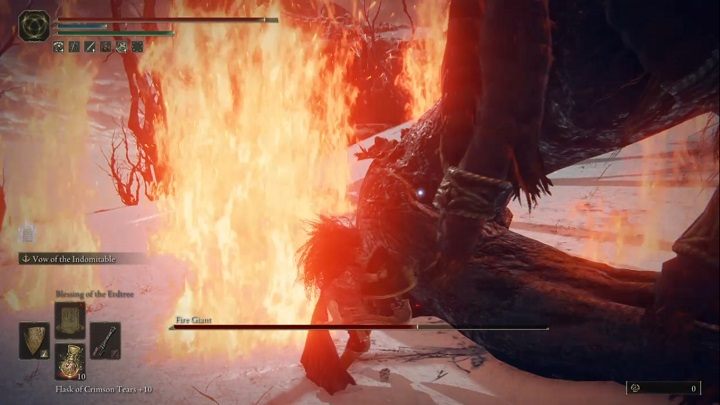 This is important when attacking the Giant's foot - you will be constantly surrounded by explosions, so watch your surroundings and stand in a place where you will be safe. This will allow you to attack your opponent almost constantly. 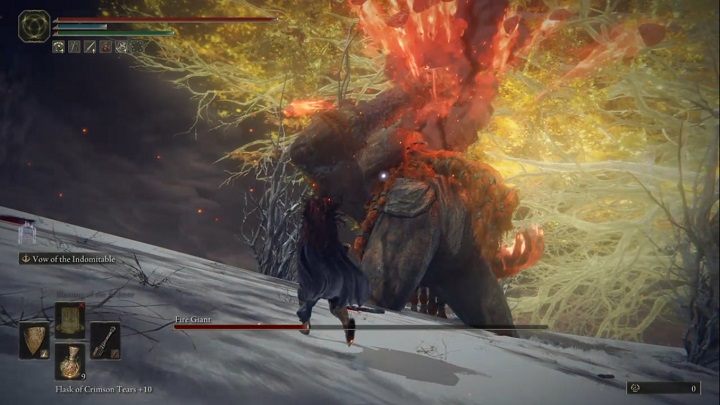 When you deplete the Giant's half of HP bar, the enemy will start to roll more often and use fire attacks. In the second phase, it is worth using a mount, because getting closer to the boss may be troublesome. 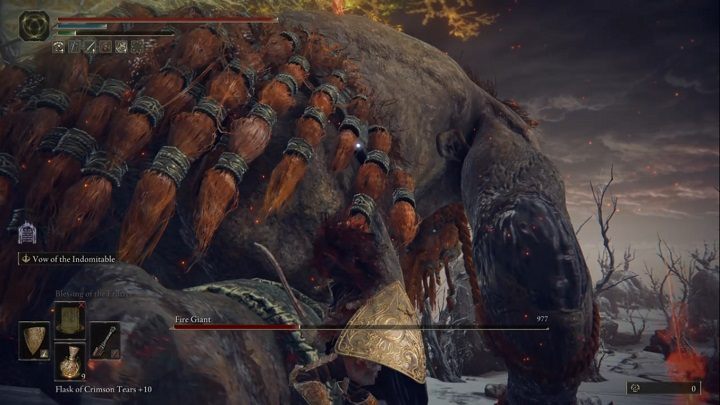 The rest of the fight try to stay close to his right thigh. The opponent usually rolls to the left, so you will avoid a lot of potential damage thanks to this. You will also avoid fire attacks that the boss launches ahead. It may also happen that he will breathe fire - in this situation, run on your horse to the sides, slowly heading towards his right thigh. After a few such cycles, the fight should be over.