This page of the Elden Ring guide is dedicated to Black Blade Kindred boss battle, an encounter that takes place in Greyoll's Dragonbarrow and Forbidden Lands.

This page of the Elden Ring game guide contains tips on how to defeat the boss in Greyoll's Dragonbarrow, namely Black Blade Kindred.

The second Black Blade Kindred is located in a region called Forbidden Landsnear the Grand Lift of Dectus to be exact. The boss will appear as soon as you approach the building, jumping from above.

Black Blade's Kindred is an optional boss - you can skip him and still successfully complete the game. 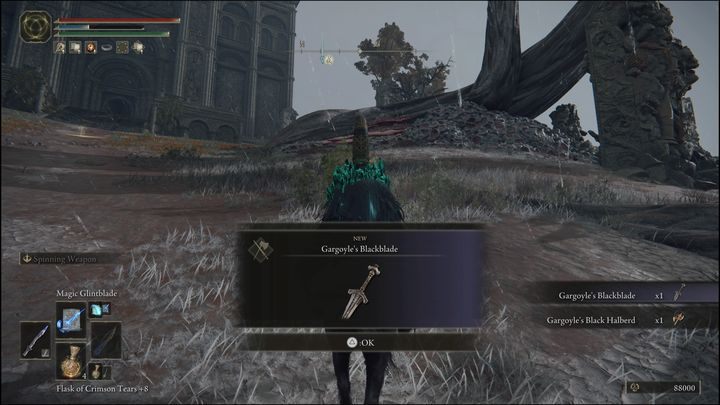 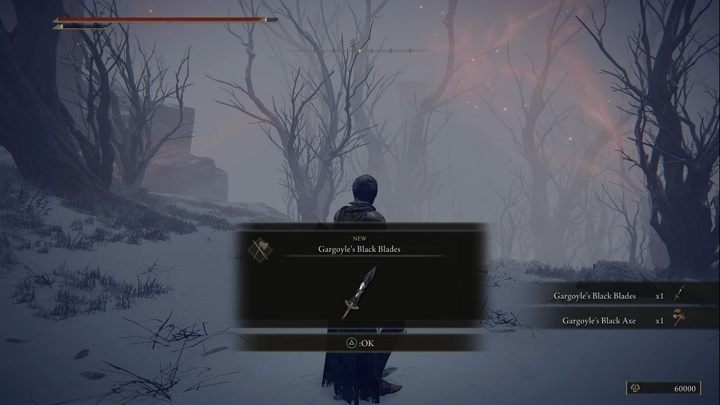 It's advisable to get behind the boss. You can do this by entering the arena through the Bestial Sanctum or by approaching the boss from the side, jumping on horseback over the Sanctum walls. 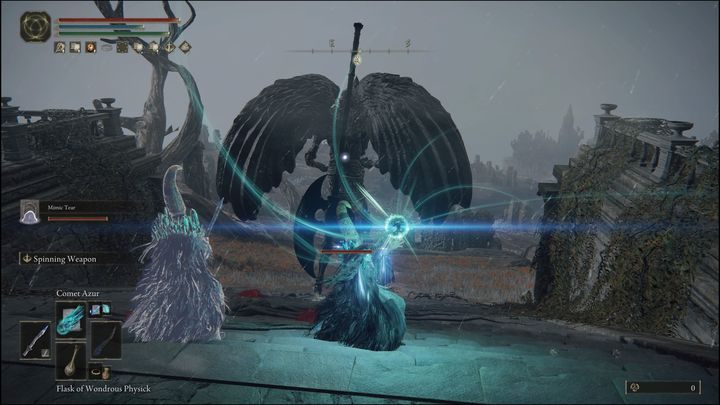 Then summon the Spirit Ashes. The best idea is to call Mimic Tear or the one that can withstand high damage, such as Crystalian Ashes. Next, make sure you have either Comet Azure or/and the Crystal Tears for Flask of Wondrous Physick that reduces mana consumption. 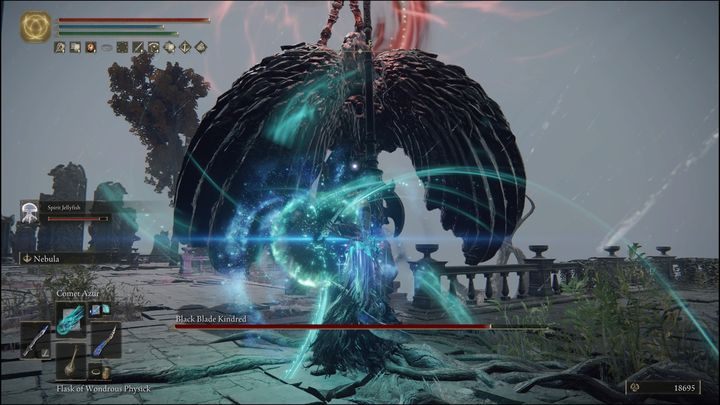 When the Black Blade Kindred leaves, change your fighting style and spells. It is a good idea to summon a mount, and use fast and long-range spells. Every time your opponent approaches you, run the other way or to the side and cast spells. 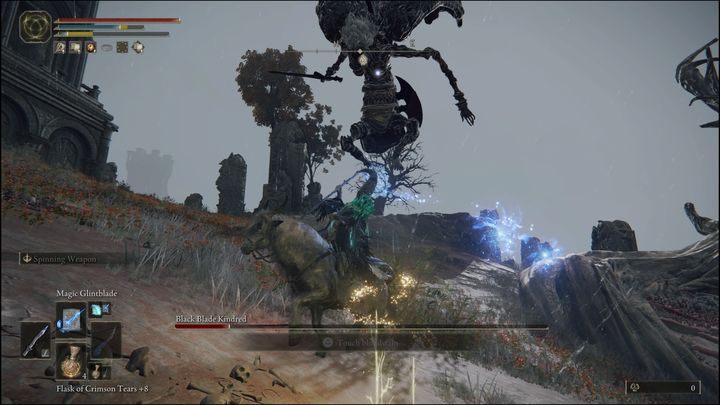 The boss will often fly up into the air and attack with white weapon As soon as you see that he rises into the air, quickly head the other way on your mount and use, for example, Magic Glintblade or Glimstone spell.

You can make the fight a little easier by sneaking up on the opponent from behind. You will do it, for example, by using the exit from the Bestial Sanctum, which it guards. You can also use the surroundings if you go from the other side and use your mount to jump behind the boss's back. 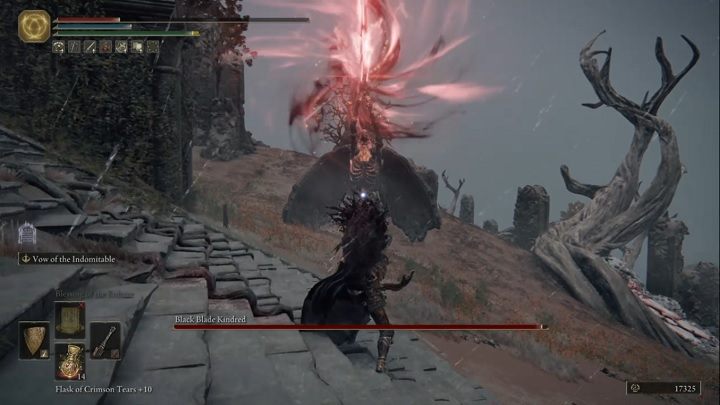 Black Blade Kindred uses two weapons - a sword and a great ax. In the case of the first one, he mostly attacks straight, so it's easy to avoid them by dodging to the side. However, when you are at an average distance from him, he can use a magic attack that goes in a straight line. Here, too, a well-timed side step will work. 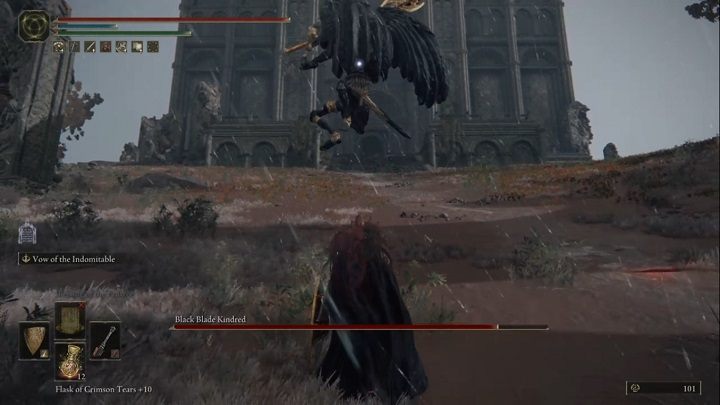 When using the ax, the enemy will perform wide attacks, which are best avoided by dodging towards him (this also applies to horizontal sword attacks). He will also do a lot of jump attacks - avoid them by dodging forward. This way, you will avoid an area attack and - if all goes well - you will find yourself behind his back, giving you the opportunity to attack. 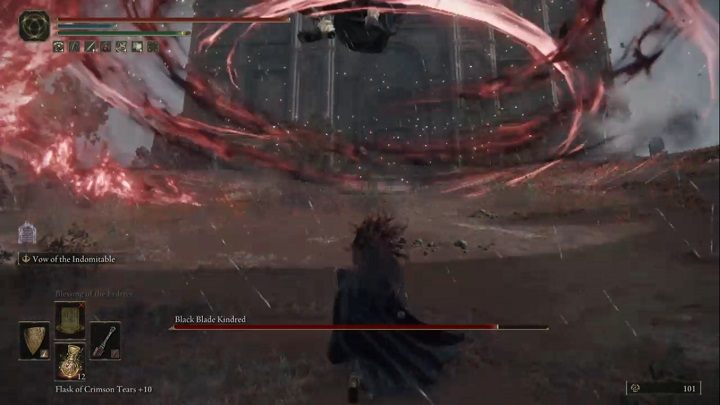 It may also happen that the opponent creates a magic tornado after jumping. If you are close to him, prepare to dodge again and again in between the devastating attacks. Avoid getting hit by an explosion at the end of this combo - it happens when the ax hits the ground. 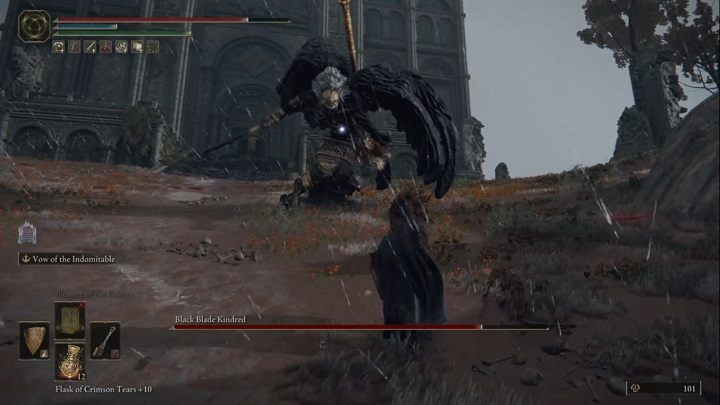 It is worth using the environment - or more precisely, the difference in height. If you use a short weapon, try to keep your opponent above you, and if you use a longer one, you should try to be above him. This way, it will be easier to avoid enemy attacks, because some of them will not hit you. The environment can also be used in different ways - when the enemy jumps on them and falls while attacking, his attack will be interrupted.