This page of the Elden Ring game guide contains tips on how to defeat the boss in Leyndell, Royal Capital, namely Morgott, the Omen King.

The easiest way to get Leyendell is from the Site of Grace, Queen's Bedchamber. From there, go up the stairs and enter the boss arena. 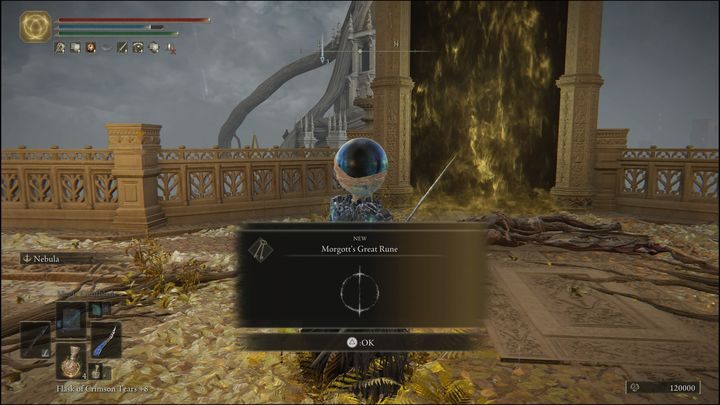 For defeating the Royal Knight Loretta, you will receive Runes (120,000), and for Morgott: Morgott's Great Rune and Remembrance of the Omen King .

After entering the arena, it's worth summoning Spirit Ashes or Melina. In this fight, choose a summon that will withstand the boss's attacks for a long time. The main objective is to provoke Morgott, thanks to which you will be able to use the spells easily. 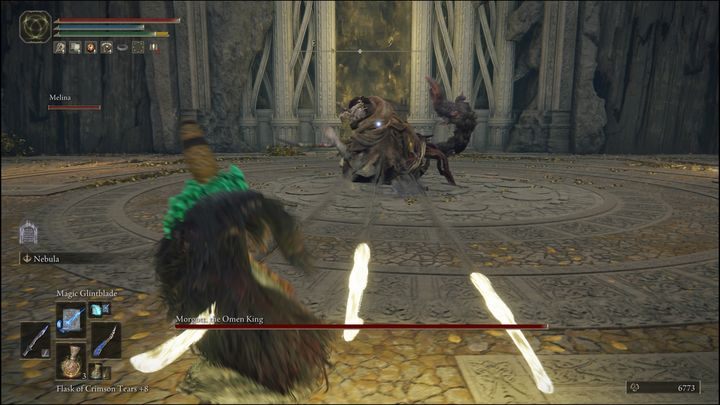 Being further away from the boss, you encourage him to use ranged attacks, such as quickly throwing three daggers or a spear at you (a slower attack). You can avoid both attacks by dodging in any direction (if you do it at the right time). 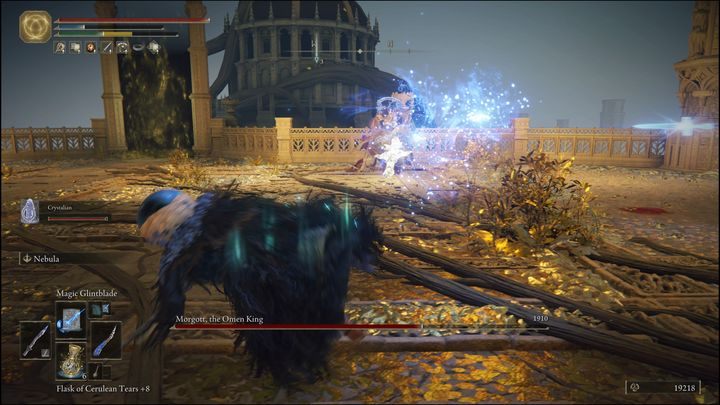 It is worth using the Magic Glintblade or quick Glimstone spell, especially if you want to defeat him solo. Morgott won't give you time to rest - he will keep attacking you. Therefore, whenever you dodge an attack, use magic while paying attention to your stamina. Always leave some to be able to use one dodge. 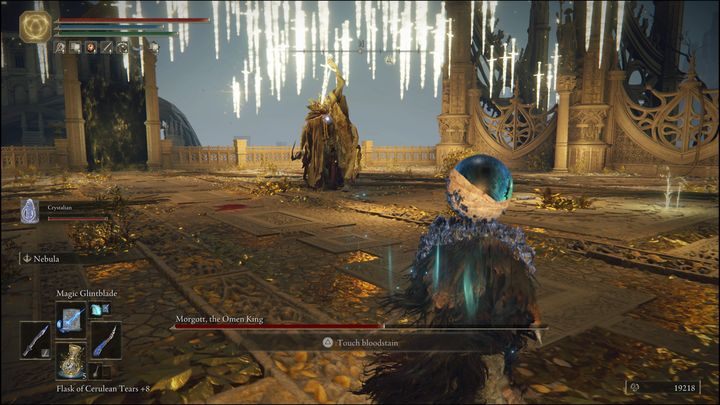 Your best chance to attack is when Morgott is creating several dozen holy swords. Stand in a place where swords won't reach you, and then use slower or chargeable spells that deal very high damage, for example, Comet Azura. If you have a Tear that reduces mana consumption, then it's also worth using Flask of Wondrous Physick 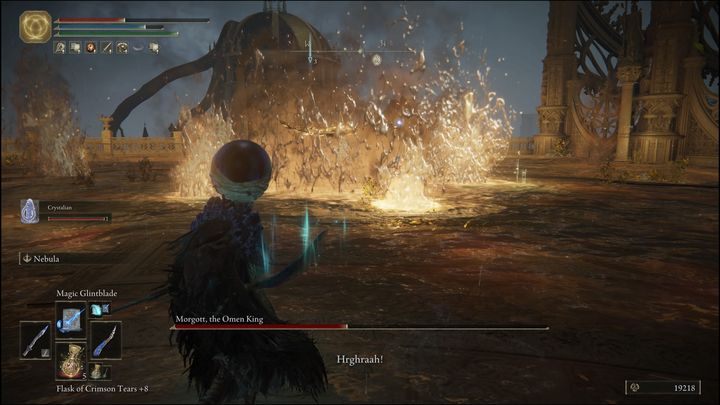 When the boss's HP drops to 50%, he will kneel down, and then the second phase will begin. Don't get closer to him because he will create several waves that deal damage at a close distance. If you see that he got down on his knees and is attacking, keep using the spells. 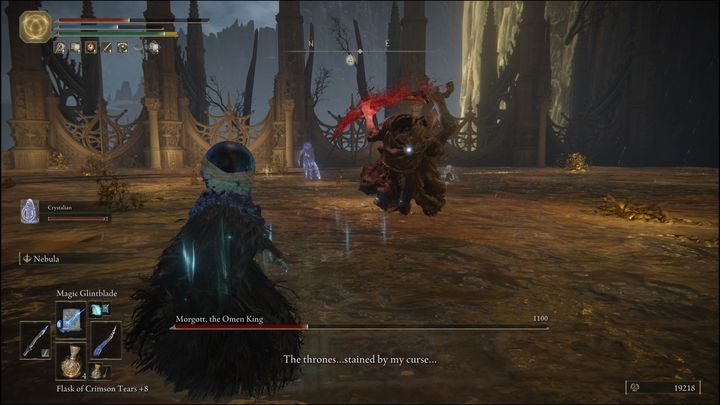 Also, watch out for his new attack. If you see Margott's weapon turning red, the next attack will do fire and blood damage. It doesn't have a very large range, so run away when you notice its animation. Be careful because, after the attack, there will be an explosion. 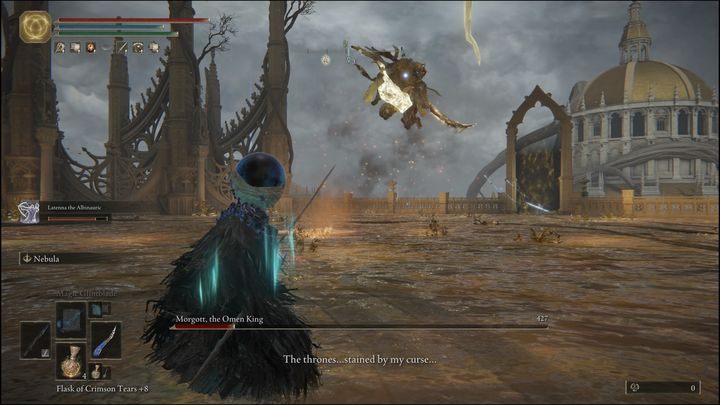 By default, if the distance between you and Morgott is too big, he will jump into the air and start attacking with the holy hammer. This attack deals tremendous damage, but it is enough to dodge it at the right moment (when he lands) to avoid it.

Morgott, similar to Margit The Fell Omenn, uses a sword but also materializes a magic hammer and dagger. It's better to avoid those attacks, although, at this stage, you may already have armor and a shield that will reduce holy magic damage. 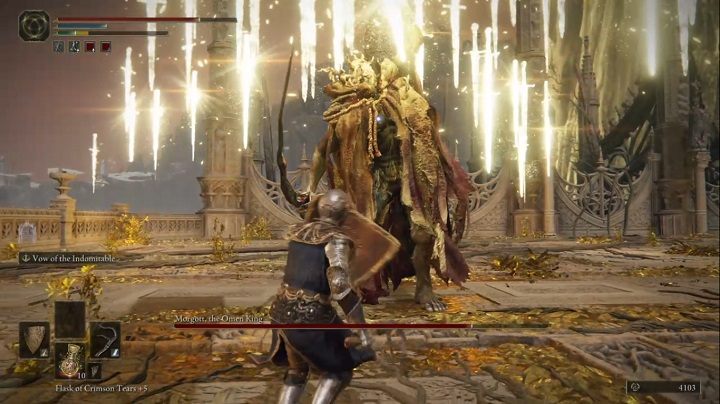 The attack that Margit don't have is a rain of swords. If you fall into a trap, it may end badly. The safest thing to do is run if you notice that the swords are rising in the air. You can also look at the light on the ground, which will indicate where the swords are going to fall. 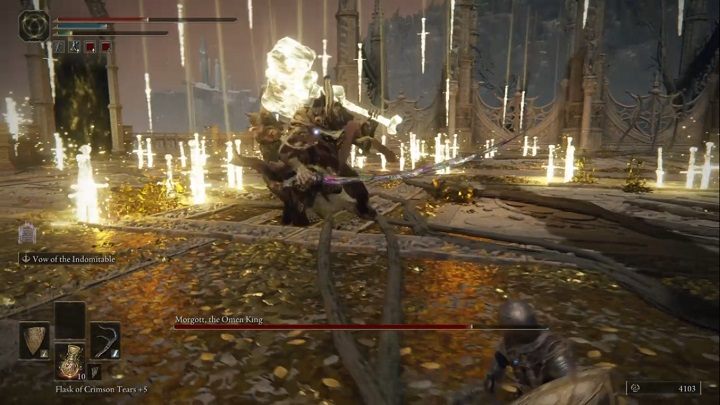 Even before the rain of swords stops, Margott will attack. So be prepared to block or dodge towards him, which will allow you to strike a few hits. However, if you get behind his back, watch out for the tail attack. After a combo, the boss may also jump away from you and simultaneously throw three daggers at you. 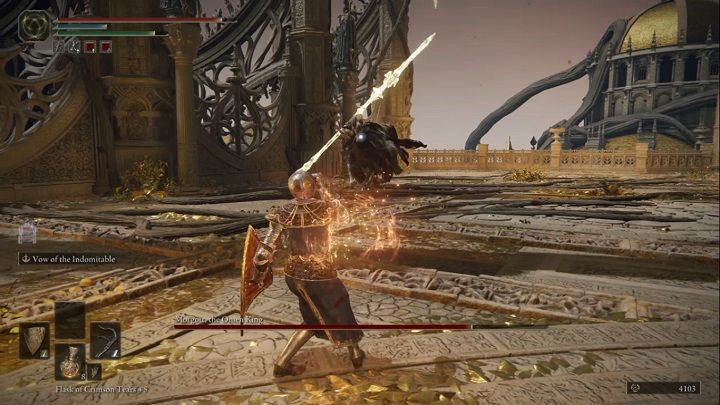 If you keep him at a greater distance, Margott will use his magic spear. It's best to be prepared to dodge it when it's about to hit you. However, be ready for another attack because shortly after throwing the spear, Margott will charge at you using the same weapon. You can avoid this attack by dodging sideways. Sometimes, instead of charging, the enemy will jump attack you with a spear. After such an attack, it will take him a moment to return to charging, so it is an opportunity to deal a few blows. 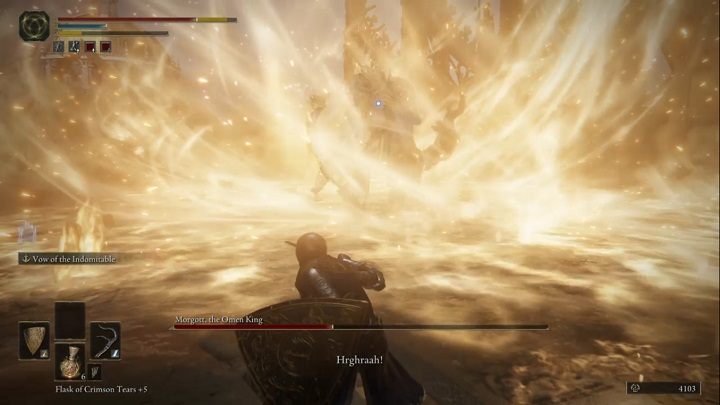 When you deplete half of his HP bar, you will enter the second phase of the fight. When he stops and starts screaming, you may strike him a few times, but watch out as he will soon explode. After that, you have to be cautious because the geysers will be erupting in the arena. 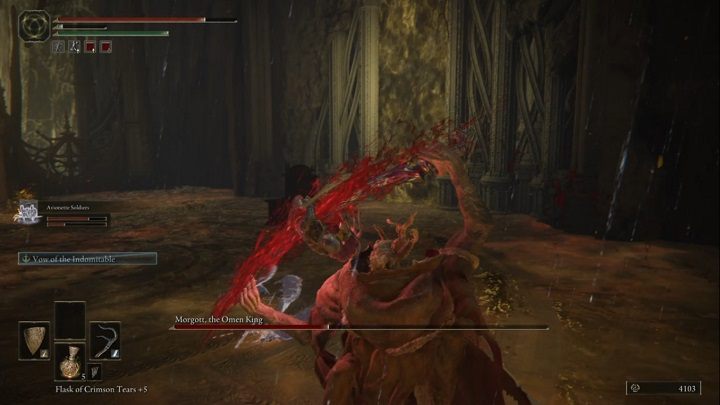 In this phase, the enemy's sword will be enhanced with magic attacks or bleeding status. If you notice that his sword is turning red, prepare to dodge the attack - he will pierce you, lift you and throw you to the ground dealing a lot of damage. The rest of the fight is similar to the first phase. Remember not to dodge too quickly - give your opponent time to make a swing.