This page of the guide to Elden Ring contains tips on how to defeat the Godskin Noble boss located in the Volcano Manor.

The Godskin Noble is in the Volcano Manor, specifically in the Temple of Eiglay. You can get there through the previously opened bridge (shortcut), from the site of grace called Prison Town Church. 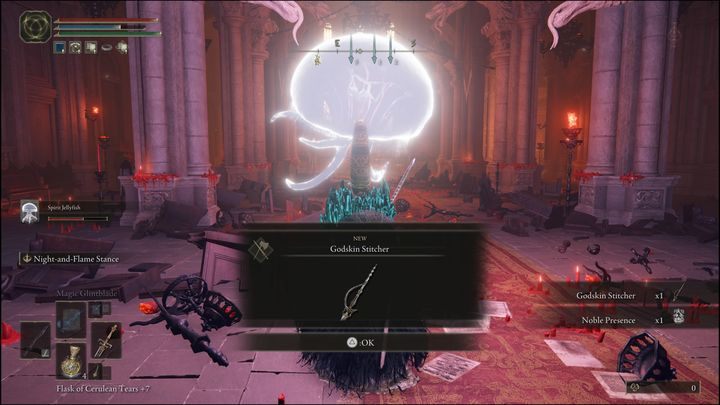 At the very beginning, when you enter the arena, the boss will be a good few dozen meters away from you. This is the perfect moment to summon the ashes right after you move towards the boss through the fog. 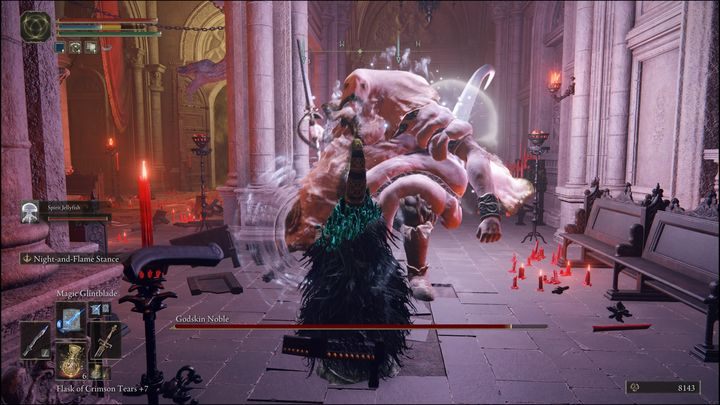 If you have spells that take a long time to charge, it is a good idea to use them at the beginning. You may have trouble with that later. The main reason for it is that when the Godskin noble sees that you are using a spell, or are healing or restoring mana, he will fire a ball of black fire.

As long as the distance between you is quite long, you will be able to dodge the ball at the last moment. Not so much, if the distance is smaller. The ball will definitely hit you in such case, dealing damage over time. 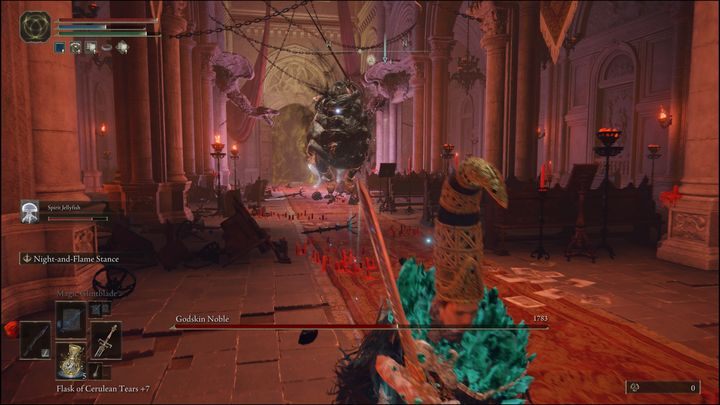 Don't approach the boss when he flies up and starts glowing with black fire. He will push after a while and throw you off balance, dealing you some minor damage. However, if you're playing as a mage, this is your perfect opportunity to use some slower, but more powerful spells. 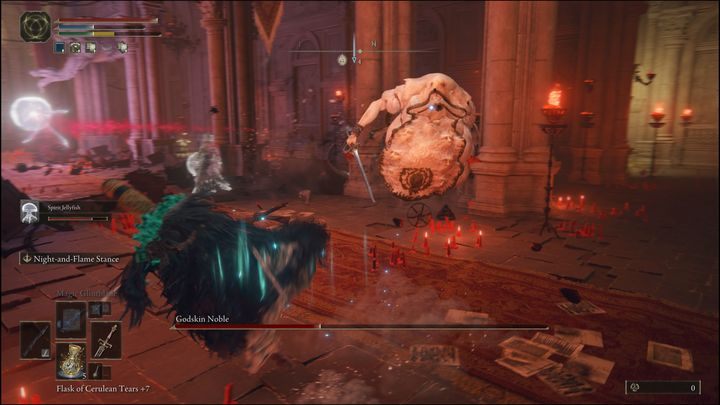 When the boss starts to approach you, try to run away from him, and hide behind the columns. You'll dodge most of his attacks (but watch out for the quick rapier attacks). Cast your spells again when you're at a safe distance. 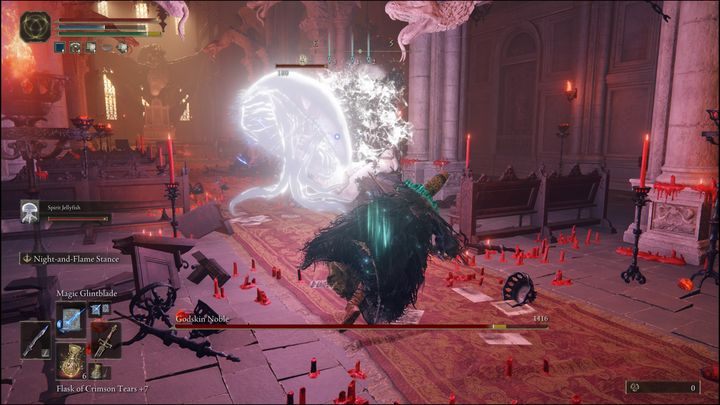 The biggest problem will be the boss's increased size and his rolling attack towards you. This attack is hard to avoid because of that big size. The columns can help you out here, though. If you stand behind them, the boss won't be able to destroy the pillar, even though he'll keep rolling. He'll stop after a while, which will be a good time to find a better position and attack with more spells.

The fight will start after you enter the temple. The Godskin Noble is at the other end, at the altar. 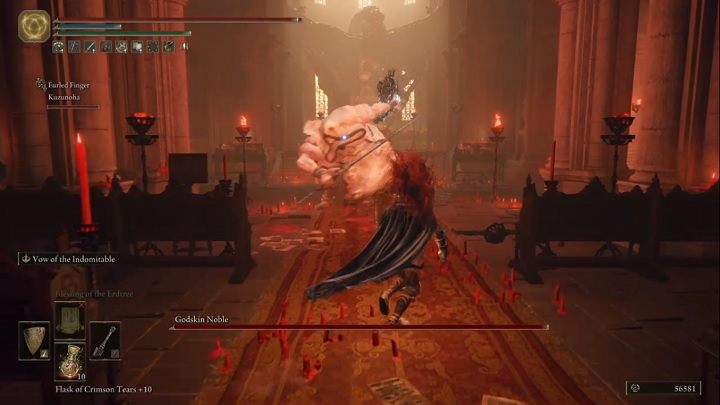 The first thing to do is prepare for an incoming fireball. The Godskin Noble performs it when you are within medium range. You can use the environment to protect yourself from magic - including the benches, but they will be destroyed. If the spell hits you, it will keep dealing damage for a while, just like fire. 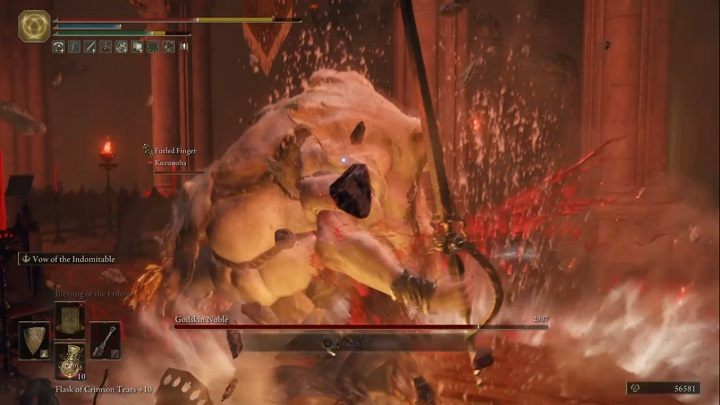 In the first phase of the fight, the opponent uses weapons and spells alternately. In addition to the forward attacks, the Godskin Noble also likes to hit the ground with the handle - this is an area attack that can be avoided by dodging on impact. 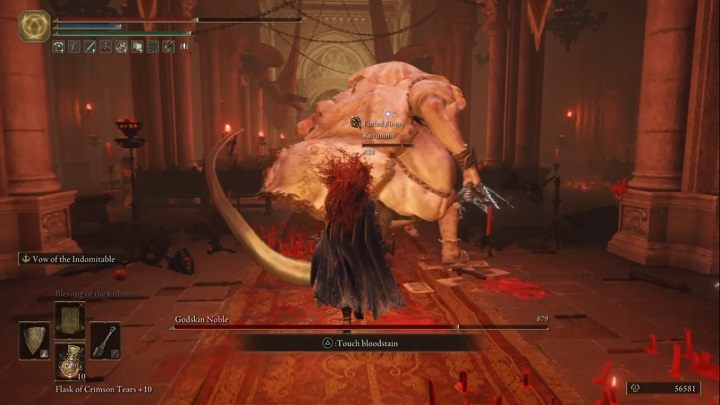 It is good to keep dodging towards the enemy throughout the entire fight. Thus, you will be able to attack him from behind. The enemy, however, likes to punish such behavior, so be prepared to avoid his sweeping tail attack. 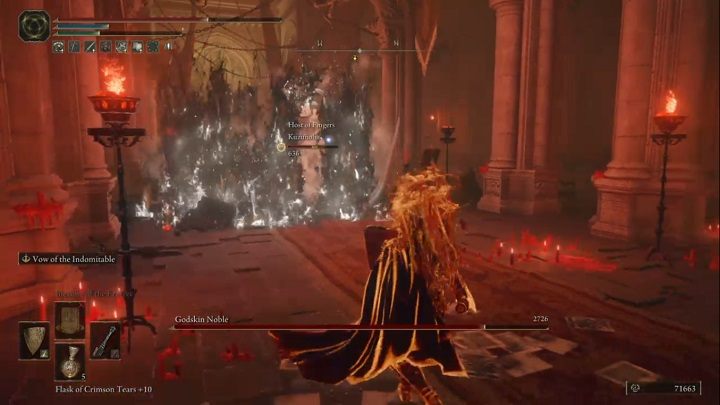 Sometimes the enemy will also build a wall of fire. You can recognize the attack by the enemy creating the spell in his hand and holding it low above the ground - after that he will make a swing, putting up a wall of fire. It lasts for a few seconds, so you will have to avoid this place until the fire disappears. 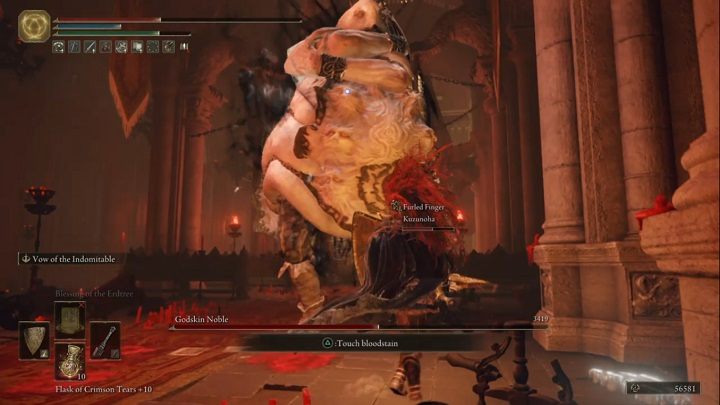 When you deplete half of boss's HP, the fight will go into the second phase. The enemy will start it by rising up and collecting fire on his body - you can use this short moment to attack a few times. If you do enough damage, you'll throw him off balance, which you can then use to deliver a critical hit. Be careful though, because the enemy will soon explode and hit the ground, dealing a lot of damage. 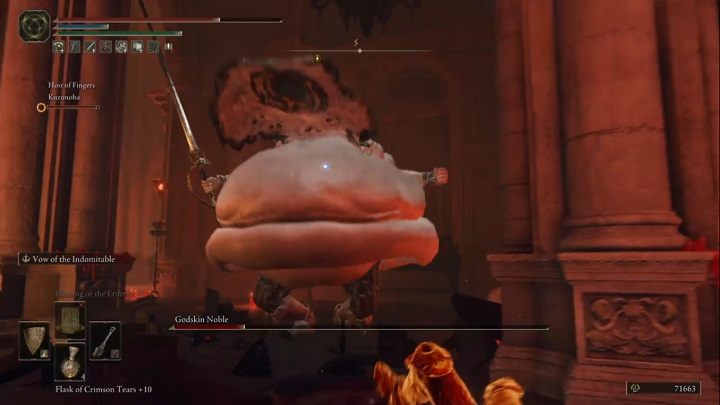 Now the opponent will also attack with his body. He can bounce on the belly and then go up and hit the ground hard. 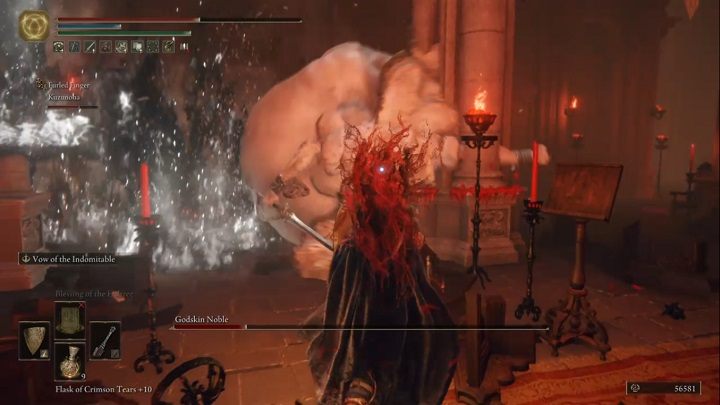 In addition, there is an attack in which the enlarged enemy will roll for a while. Stand behind one of the columns and wait it out - you can also stop the attack by hitting the opponent. You can use the environment throughout the fight, but keep in mind that the attacks dealt with the rapier may hit you even when you are behind something.