This page of the guide to Elden Ring contains tips on how to defeat Astel, Naturalborn of the Void - the boss located in the Lake of Rot.

To get to Astel, you must go to Lake of Rot and then enter the coffin. It will lead you to his arena. The fastest way to go there is from the site of grace called the Grand Cloister. 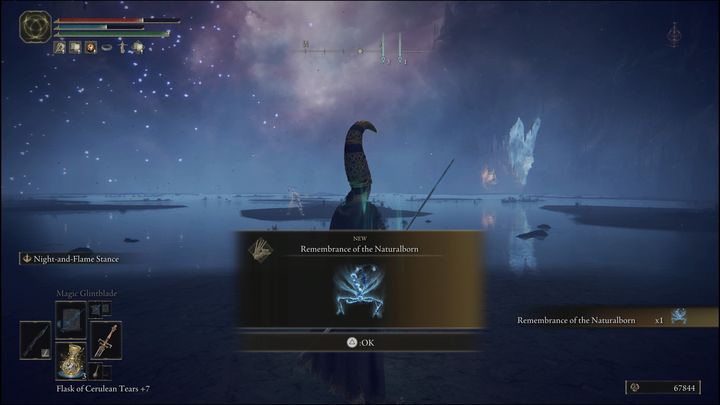 For defeating Astel, Naturalborn of the Void, you will receive 80,000 Runes and the Remembrance of the Naturalborn.

Before starting a fight, choose spells that can easily break the boss's stance. Meteorite magic will be perfect here. If you have several meteorite spells, you should also choose the Meteorite Staff, which strengthens these types of spells.

However, if you do not have such spells, you can choose standard glimstone spells.

You can also customize the Flask of Wondrous Physick with Tears that will eliminate any mana use and increase magic damage. If you don't have tears with these effects, tears that increase intelligence and restore half of your mana will be a good substitute. 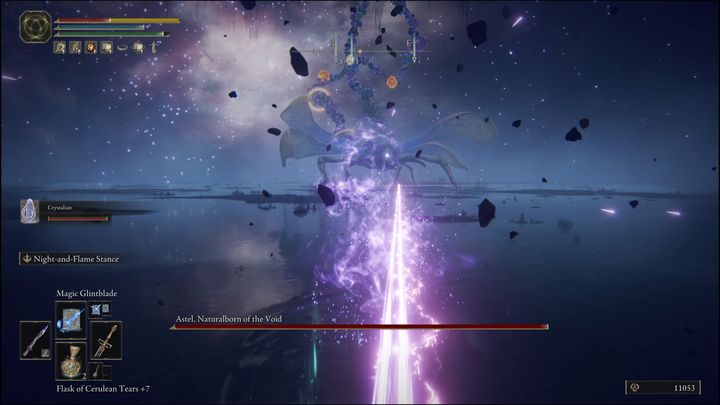 Before you summon the ashes, make sure you avoid the laser projectile first. Dodge to the side, which will increase your chances of the dodge being successful. 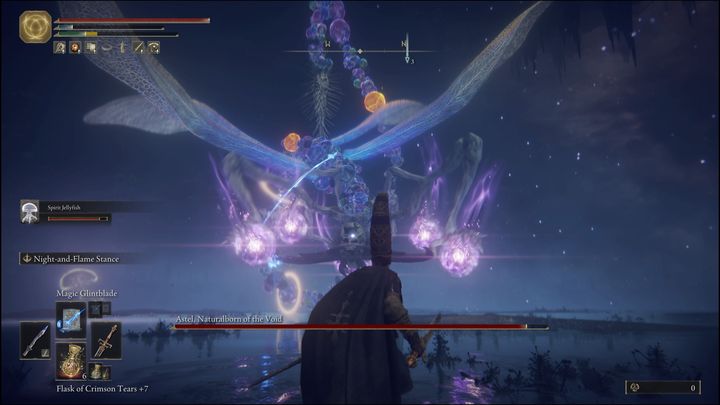 When you get a little closer to the boss, which you'll have to do anyway, because most of your spells won't reach Astel from a distance, he can fly into the air, creating magic orbs around his hands. They will cause a few explosions when hitting the ground. Step away from him and create some spells. 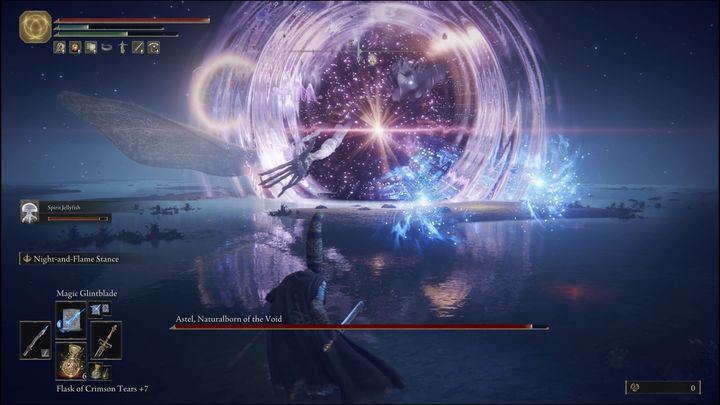 When teleporting, take advantage of the moment to heal yourself or restore your mana. If you don't need it, look for Astel instead. When you find him, use your next spells. Remember to aim for the head - this is his weak point. 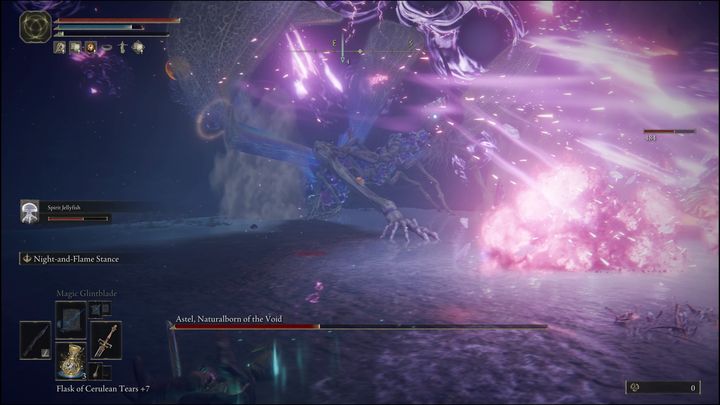 When his health drops to 50%, he will most likely use a meteor shower after teleporting. A good method is to flank him and dodge at the same time. Once you're in a convenient position, you will have time to use more powerful spells. 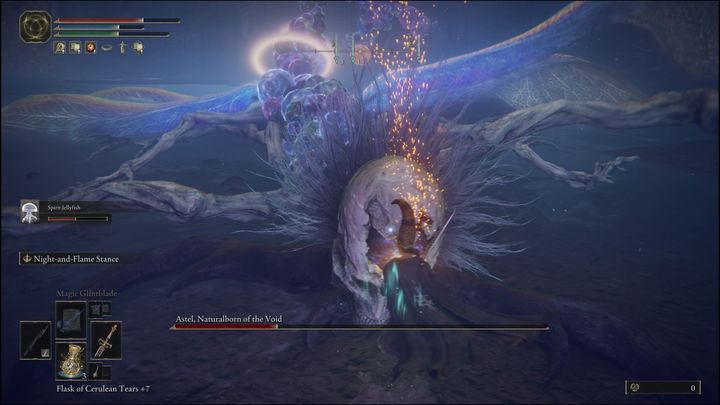 Use meteorite magic and aim for the head to interrupt the boss's attack. Astel will fall to the ground and his weak spot will appear on the skull. Use magic or melee weapons to perform a critical hit and deal a lot of damage to the boss.

At the very beginning of the fight with Astel, focus on avoiding his high-range attack. It deals a lot of damage and will knock you to the ground, so you won't be able to use ashes successfully. You will recognize the attack by the magic ball that will form next to the boss's jaws. Mimic Tears Ashes will come in handy. 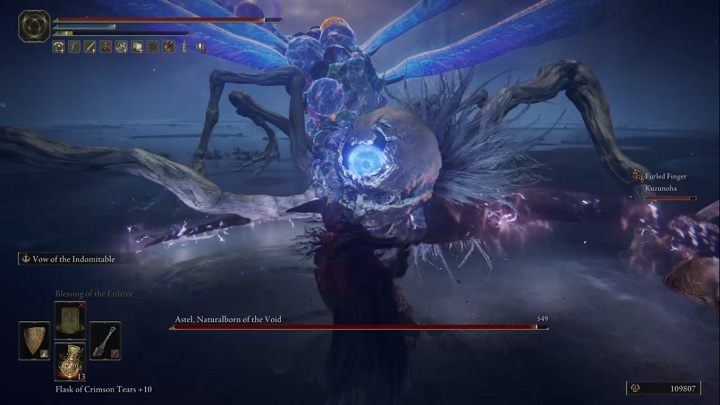 Once you get close to him, you have to watch out for multiple AoE attacks. The boss can also try to catch you in his tusks and injure you with a large explosion. You will recognize the beginning of this attack by the "electricity" around the opponent's head and the magic ball on his forehead. To avoid being caught, dodge when the tusks are right next to you, or move away a good distance when you see the boss preparing to attack. 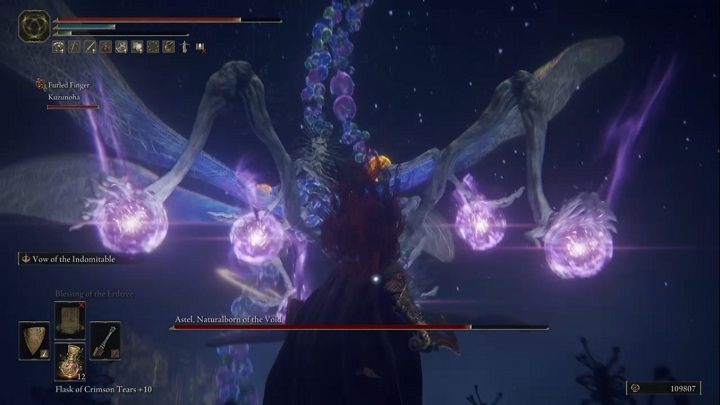 When you see that the enemy rises into the air and forms magic orbs with his hands, that meas he's about to perform a four-hit AoE attack. It consists of magic circles that will appear one after another at a relatively fast pace, increasing their range with each hit. Thus, backing away may prove ineffective. Instead, keep dodging at a regular pace. 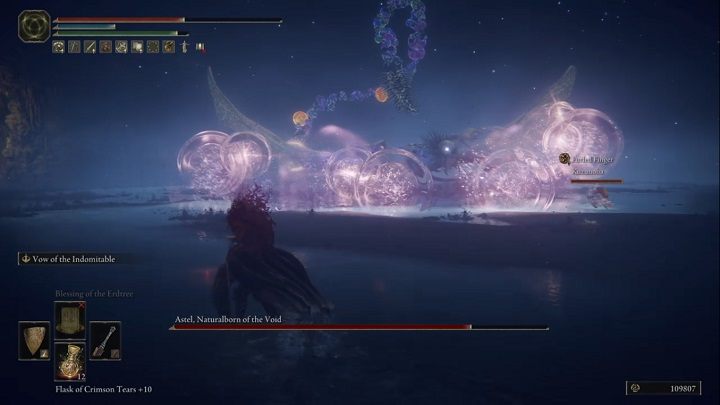 The enemy will also spread magic dust, which will then explode where it hit the ground. Jump away from these areas and you will be able to avoid the attacks - their range is not very large. 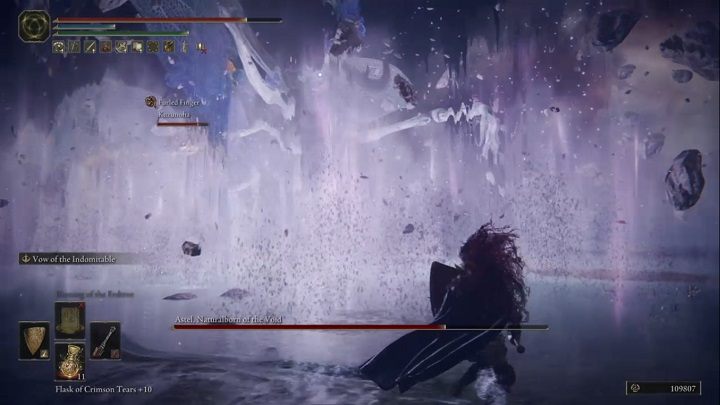 You may also notice that sometimes your opponent will tense up and the small stones around him will float upwards. This means that the immediate area around the boss will explode and pull anyone else up into the air before throwing them hard against the ground. When you see him getting ready for this attack, runaway as soon as possible. A perfect dodge (just before everything goes up into the air) will also be effective, but you have to time it well. 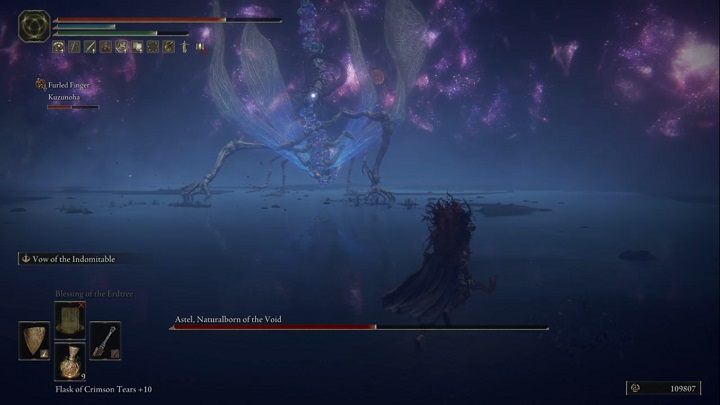 When you take about half of his HP, the enemy will move to another place (which will look like an explosion) and create a meteor shower. You will recognize it by the magical clouds above him. To avoid the incoming stones, sprint to the side, but since the meteor shower is quite scattered, you still might get hit. 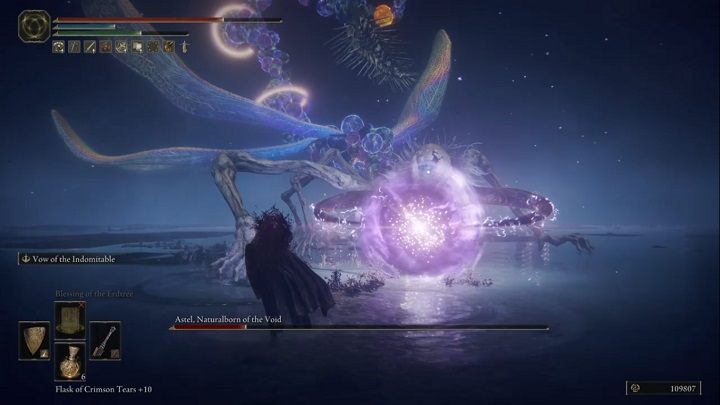 The second part of the fight looks the same as the first one - the only difference is the attack (teleport and meteor shower). Also, watch out for the magic shot that your opponent takes even if you're close. At this point, you can use your shield (it will help you save a lot of HP), but the best tactic is to dodge. Hit your opponent's head as often as possible, because that's his weakest point. However, you can also attack his limbs, which are not as resistant as the crystalline torso.