This page of the guide to Elden Ring contains tips on how to defeat Regal Ancestor Spirit - the boss located in Nokron, Eternal City. 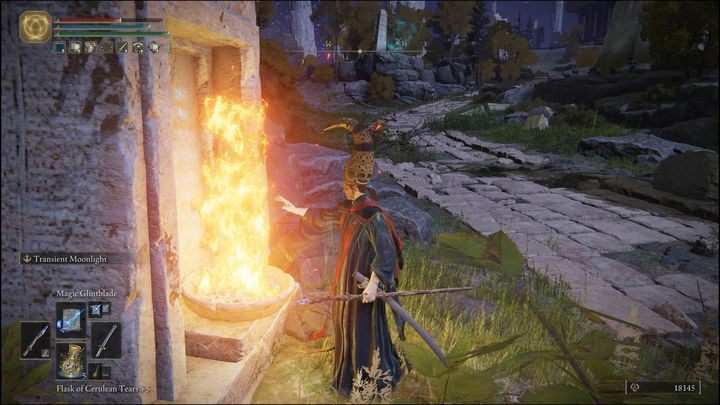 To get to the boss, you must first light all six fires. Once you do this, you should go to the Hallowhorn Grounds and interact with the body that looks like a deer. A similar boss, the Ancestor Spirit, a slightly weaker version of the Regal Ancestor Spirit, is in the Siofra River, where you need to light 8 fires. 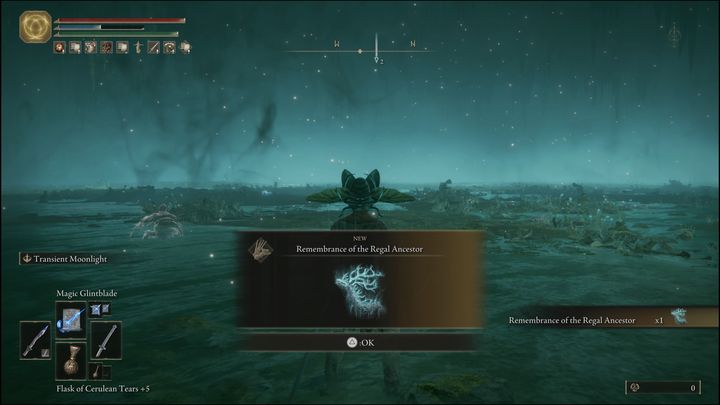 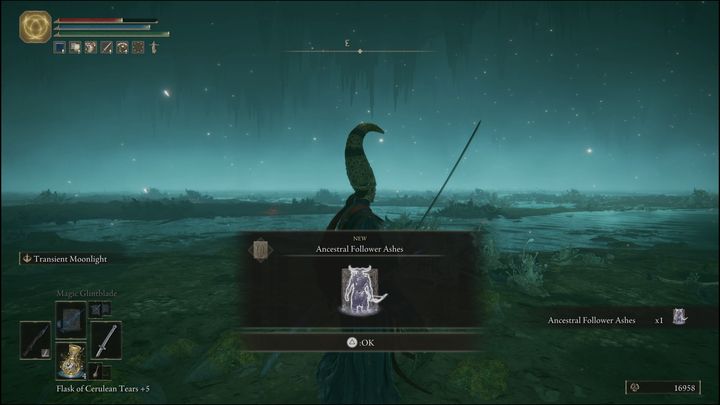 However, for defeating the Ancestor Spirit in the Siofra River, you will receive 13,000 Runes and Ancestral Follower Ashes.

After entering the arena, you have a lot of time to summon any ashes. Useful ashes are: Mimic, Battle Mage Hugues, Wolf Horde and Medusa. 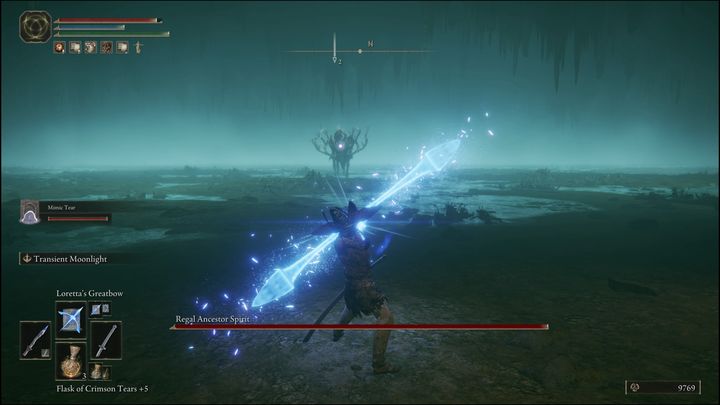 You can also use the Flask of Wondrous Physick to have unlimited mana for a while. When you drink this potion, you can also use more powerful spells. If you have Azur Comet, you can deal a lot of damage.

However, if you don't have a lot of strong spells or don't meet their requirements, try to start the fight using Loretta's Greatbow. Then fight with the Magic Glintblade. 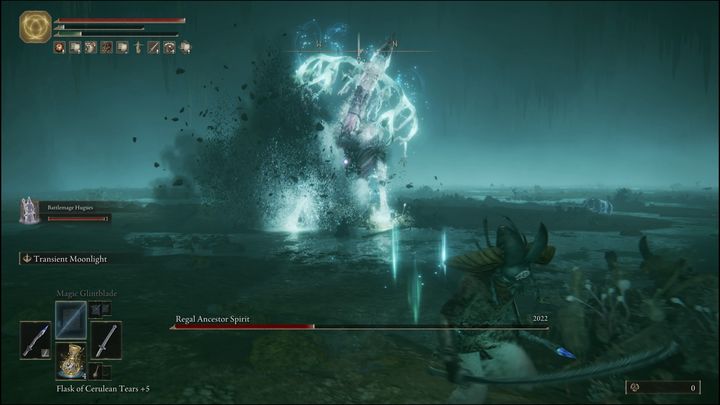 You can also use meteorite magic. By aiming at the boss's head, after a few such attacks, you will be able to stun the enemy, breaking his stance. This will reward you with the option to perform a critical hit or use a slower, but much more powerful spell. 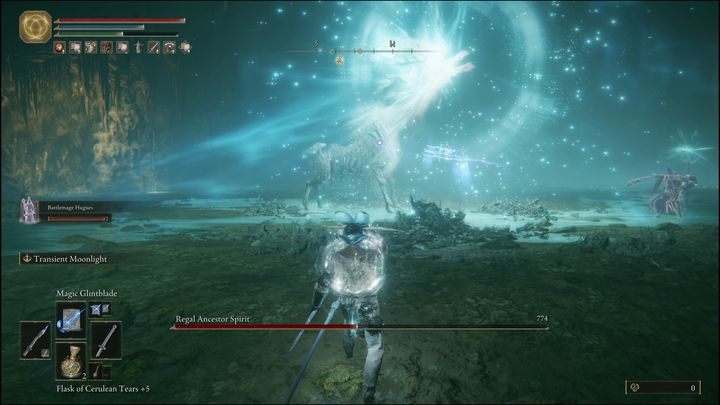 When the Regal Ancestor Spirit emits a bright light and stands still, he will use a spell that will heal him by a lot. This is your great chance to use slower spells that take a long time to charge. You can also cast meteorite spells to break his stance and stop the healing process! 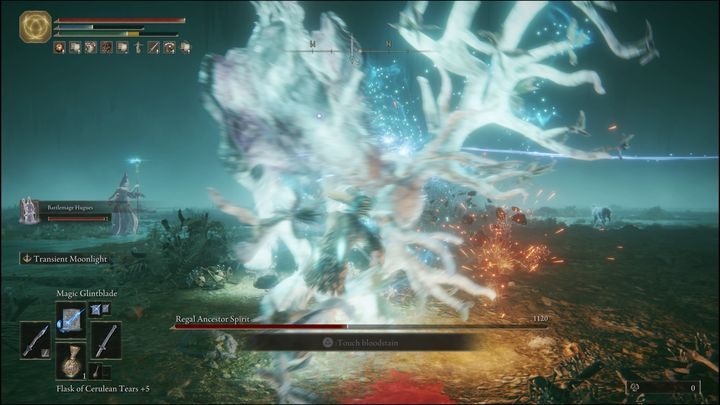 The boss's main threat are his double jumps. He will land on you the third time. When playing as a mage, you may not have much HP, which could kill you, if you do not avoid this attack. The same goes for the boss's charge, which he ends by attacking with his antlers. Simply dodge to the side. The faster you dodge, the more likely it is that the boss will miss you, as this attack takes some time. 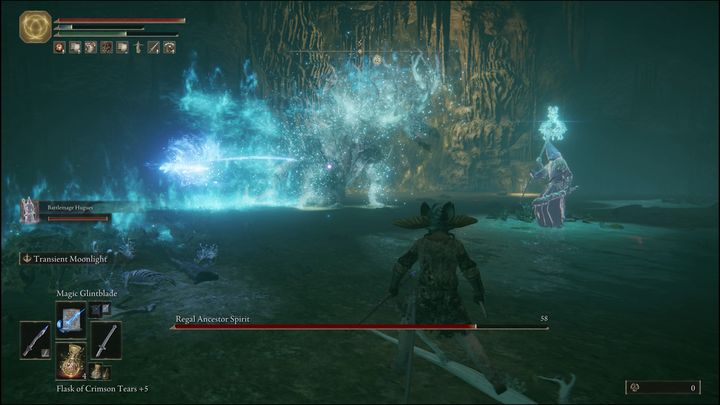 Also, make sure you don't enter the smoke created by the boss. It deals damage over time. If you have a solid protection against magic damage, this attack should, at most, nick you without taking a lot of HP.

After entering the arena, you will be relatively far away from your opponent. When you get close to it, the Regal Ancestor Spirit can attack you with its jump. The first two jumps are harmless - they will be followed by a third, dealing splash damage. Dodging when his hooves hit the ground will let you avoid loosing HP. 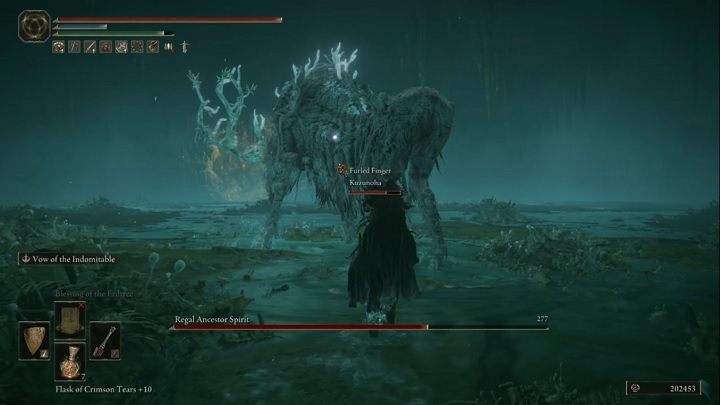 It's best to stay behind his back as often as possible to make it easier to avoid his horn attacks. In some sequences, the opponent scrubs the ground with his antlers wide to the sides, so you can get hit sometimes even if you are not directly in front of the boss. Most of the attacks can be blocked with a shield to avoid damage, but will break your guard and make you temporary inactive. Therefore, it is much more profitable to dodge. It's best to use the shield only as a last resort. Mainly due to the fact that the opponent likes to move away from you often. 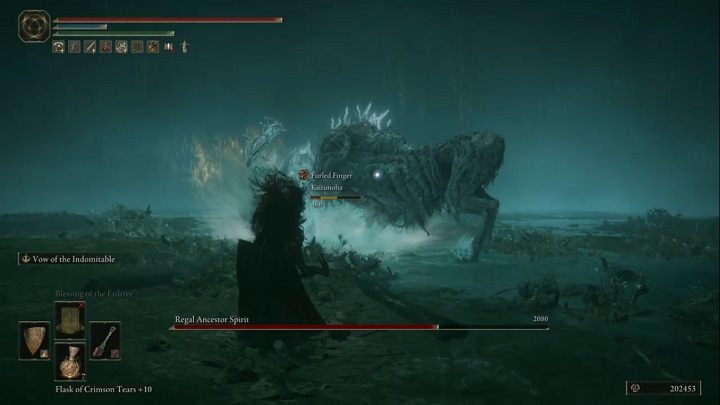 The boss also likes to stand on his hind legs and then hit the ground. Dodging on impact will let you avoid taking damage. After this attack, the opponent can make a short charge and swing his horns, which will throw your character into the air and deal relatively high damage. Dodging to the side or towards the enemy will let you avoid it. 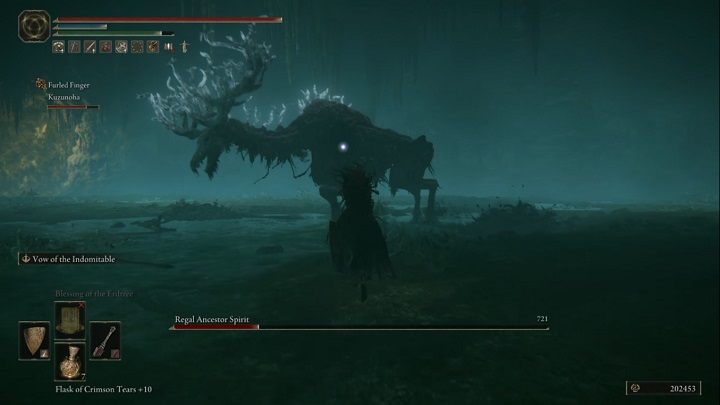 When an enemy's HP drops below half, he can heal himself by killing nearby creatures. The boss will also gain an additional rolling attack. To avoid this dangerous attack, it's best to stick to his side. The Regal Ancestor Spirit will also teleport - when he does this, he is helpless for a while, so you can hit him several times before he goes to another part of the arena.