This page of the Elden Ring guide contains tips on how to fight the boss located in the Caelid region, namely Redmane Castle, on the southern island. 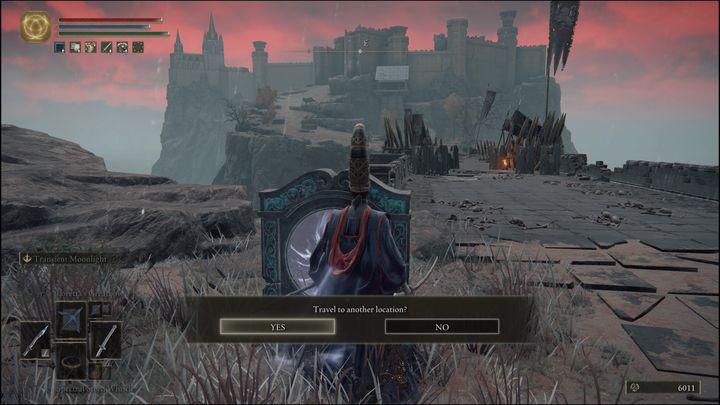 Defeating Radahn is required to complete the main storyline. You will get to it through the portal located at the Site of Grace called Impassable Greatbridge. 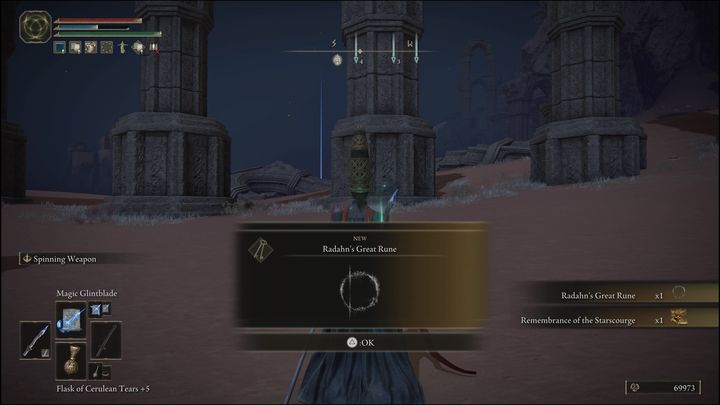 Defeating Starscourge Radahn rewards you with 70,000 Runes, Radahn's Great Rune and Remembrance of the Starscourge.

You must prepare well for this fight. Amulets such as the Cerulean Amber Medallion (increases mana), Graven-School Talisman (enhances sorcery) or Stargazer Heirloom (increases intelligence) will come in handy. You should also have at least 5 bottles of cerulean tears as well as mix a wondrous physick to make it increase intelligence and replenish mana. 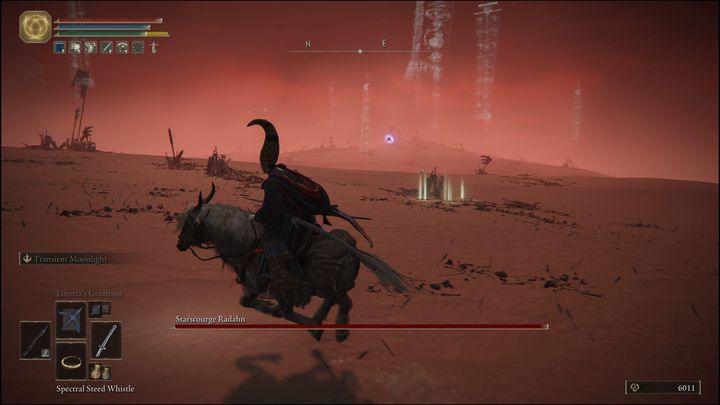 As the fight begins, immediately after entering the arena, mount your steed. Gallop towards the boss until he fires a purple arrow. Once he does so, jump off the steed and dodge-roll. You'll probably have to do it twice. 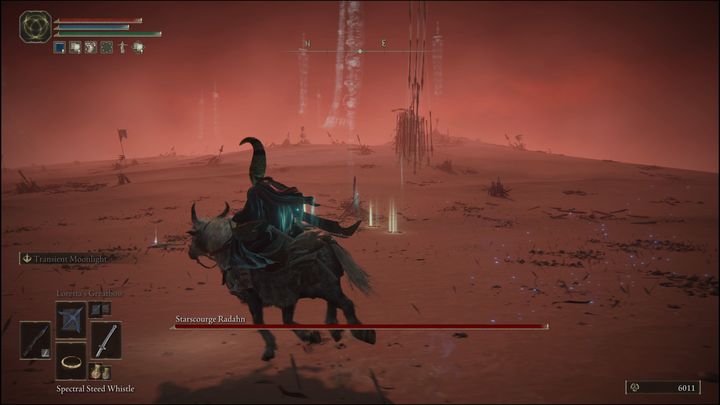 Once you get a bit closer Radahn will start attacking you with a barrage of arrows while mixing in some other attacks along the way. You must reach him as soon as possible while avoiding the rain of arrows. 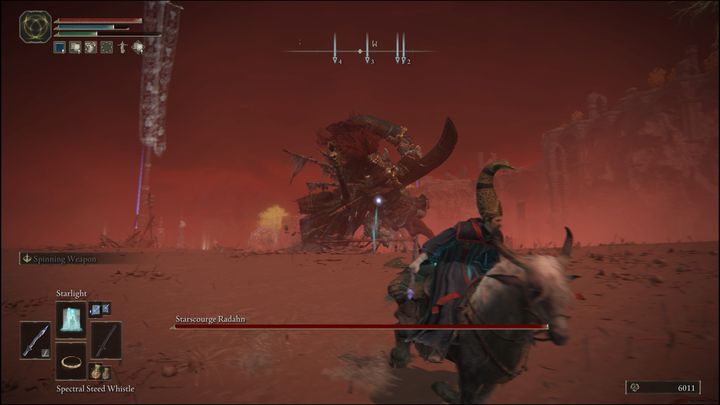 Once you finally close the distance, Radahn will put away his bow and gallop towards you to fight you in melee. This is a good opportunity to pelt him with spells. The old reliable Magic Glintblade is your best bet. This spell is perfect against Radahn, as his combos are very long, letting you gallop away from him while casting, the projectiles hitting the boss after a while and dealing some heavy damage.

The second phase begins once his HP reaches 80%. He'll pause for a while and gain new gravity-based attacks. From now on you shouldn't get close to him. Not only can he create a gravity field covering a large area and pulling you closer, but he now also creates a shockwave during his combos which deals serious damage to you and your steed. 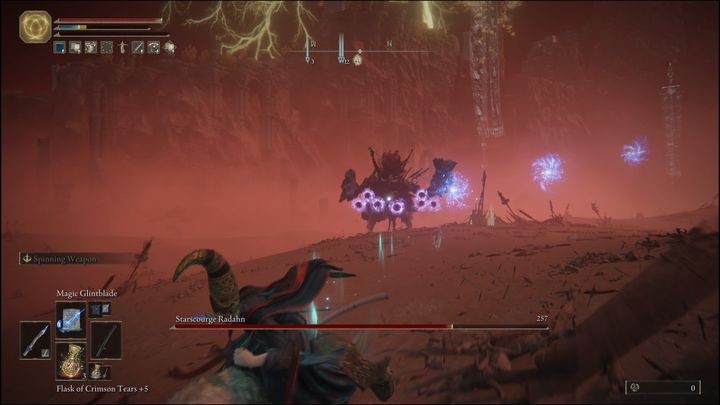 Radahn can also conjure small meteorites. Avoiding them at close range is very difficult. When he performs this attack you should move away and then gallop to the left or to the right until all his projectiles miss. Keep casting spells in the meantime. 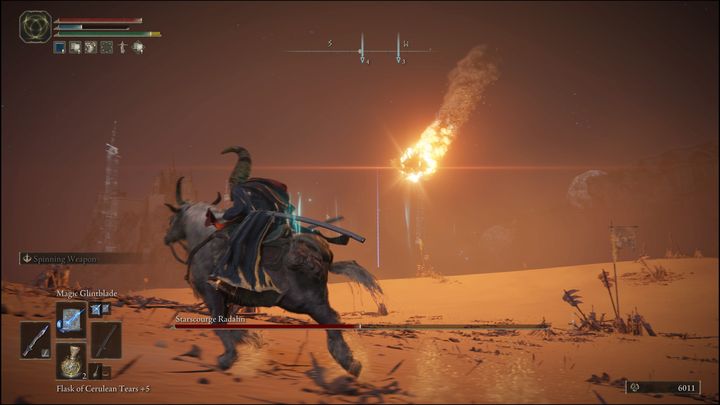 When his health reaches 50%, he'll disappear from the arena. Watch the sky - try to spot the meteor. You must avoid this attack if you want to survive. Run in the opposite direction from where the meteor is about to hit. Double jump when Radahn lands to avoid damage. 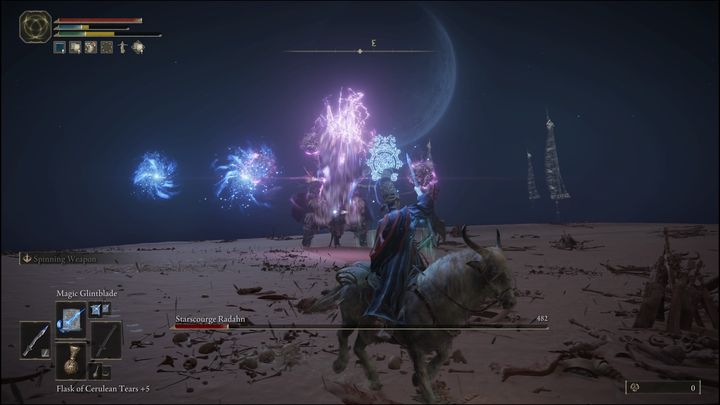 The rest of the fight is similar as to before. The key differences are two of his attacks. When Radahn lands he'll conjure four huge meteorites. They will follow him. Don't worry about them when the boss is close to you. They'll only fly towards you once the boss gets far away and starts swinging his weapons. 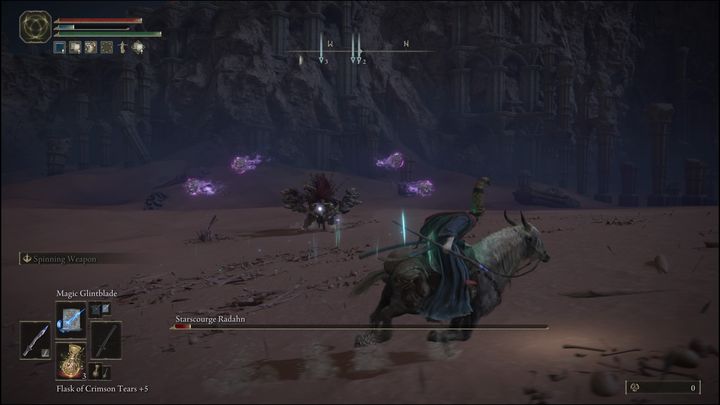 He usually does so at the very end of the fight, when his health is very low. When you see the boss moving away from you, dismount your steed. To avoid the meteorites you must dodge-roll. The meteorites on the left go first, then the right ones. Be ready to dodge twice in quick succession.

Watch out, you're still not safe after avoiding the meteorites! Radahn will strike again immediately after, creating a shockwave close to you. Avoid the meteorites, immediately mount your steed and gallop away while jumping over the shockwave!

Each time the boss gets close and executes a combo, move away to a safe distance and cast Magic Glintblade. This will let you damage Radahn without the risk of losing health.

It is best to start the fight by standing behind the nearest obstacles, the ones with summon signs. Summoning warriors at such an early stage will allow you to avoid the enemy's magic missiles while the summoned companions slowly approach him, and then focus his attention on yourself. These projectiles can only be avoided by dodging or by mounting and dismounting at the right moment. 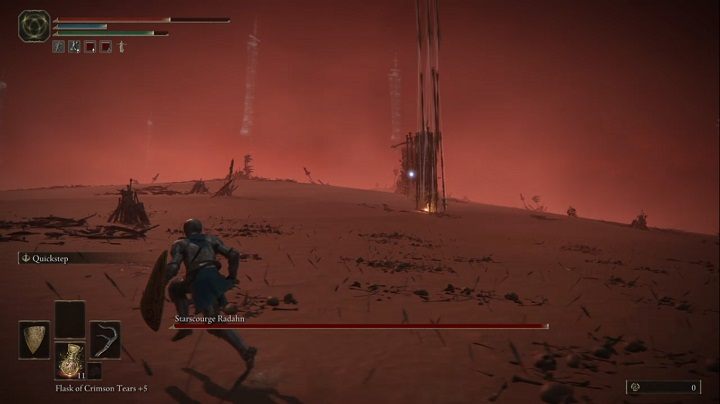 When you shorten the distance to the opponent, he will release a rain of arrows at you. You can avoid damage by sprinting, but it's best to get on the mount.

When you or the summoned warriors are next to him, Radahn will start to use melee attacks. Companions will focus their attention on themselves most of the time, but that doesn't mean that Radahn will be ignoring you. That is why it is worth running away after attacking him a few times and let others time to get his attention. 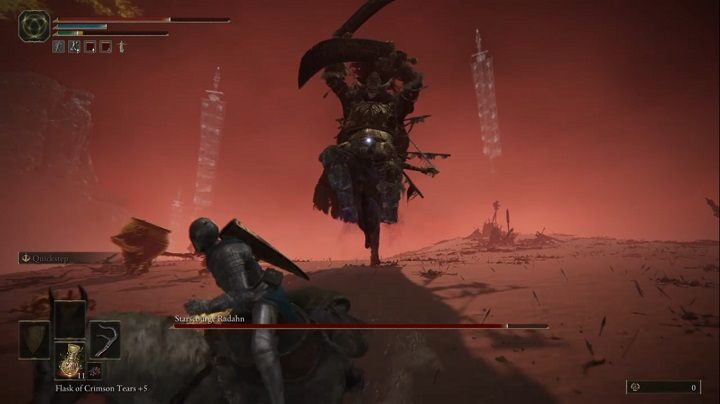 During the fight, try to be behind his back as often as possible. It is also worth using the environment to get under him - at least in situations when he attacks horizontally. Radahn also likes to use AoE attacks by hitting the ground with his swords. Staying behind him is a good way to avoid damage. Such an attack will immediately throw you off your mount and expose you to further damage. 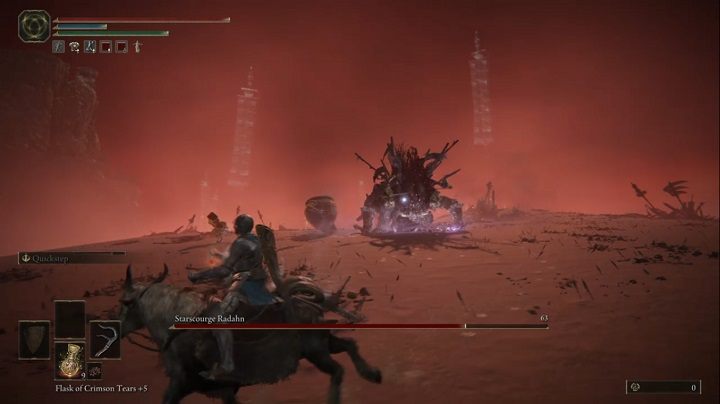 When you delpete about 20% of his HP, Radahn will start using special magic attacks. It can be a magic blast that draws nearby characters to it - after it he will use a devastating blow. He will also use magic missiles that will most likely focus on you, so be prepared to dodge. At this stage, the enemy also becomes much faster. 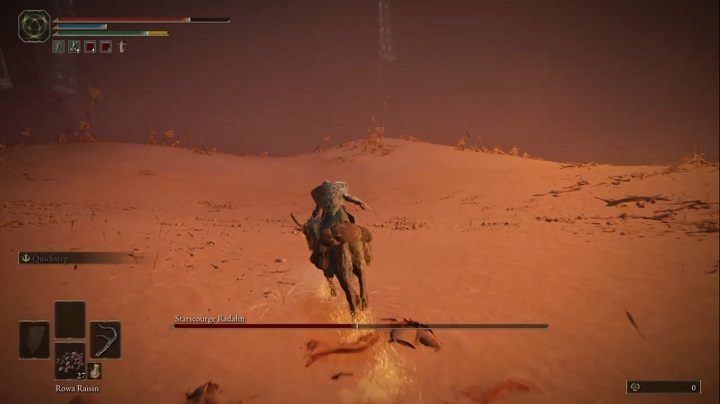 In the middle of the fight, Radahn will disappear from the arena for a few seconds. You can use this time to heal yourself and summon warriors. However, the enemy will return as a meteorite - the impact will most likely kill you. If the surroundings are on fire, run as far as possible. 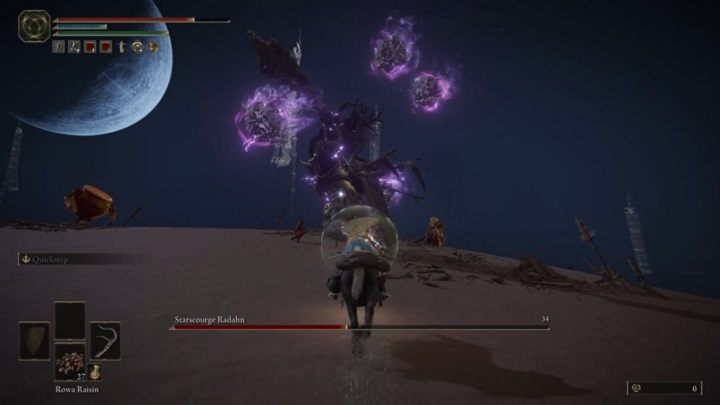 In this phase, most of the enemy's attacks will be devastating, so be careful. Huge orbs will float around him, flying in four directions as Radahn performs a series of horizontal attacks, after which he will jump into the air. Move away from him, because when he lands, the enemy will create a shock wave around him. 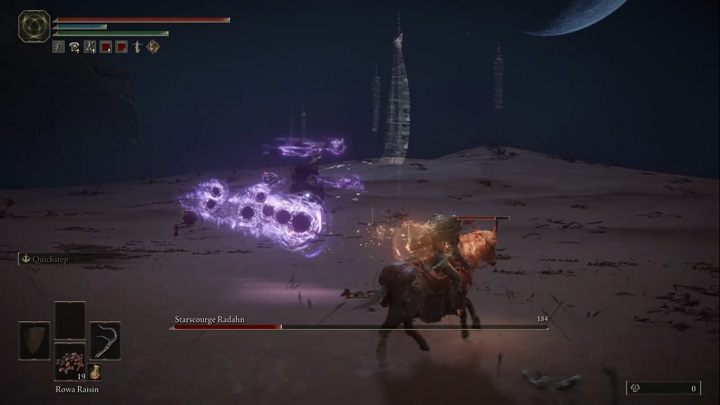 Watch out for projectiles that the enemy will fire at you. They are very accurate and if you are not lucky, you can die - especially when they all catch you. In this case, make sure you have as much HP as you can. You can avoid projectiles by speeding up your mount at the right moment or by stepping off it (the latter action grants you temporary immortality). 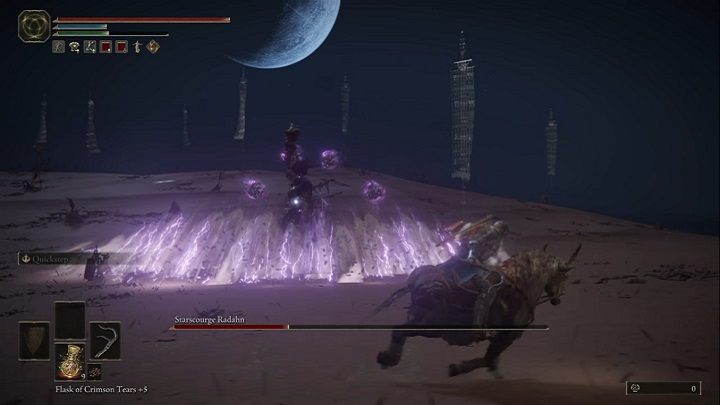 Stick to his back until the end of the fight, e.g. because of the magic wave he shoots in front of him. You really have to be far away from him to avoid it. Also, remember to often summon more warriors who will make this fight easier. To heal yourself, run as far as possible.