This page of our Elden Ring guide is dedicated to optional boss encounters taking place in three different regions. The regions in question are Weeping Peninsula, Altus Plateau, and Mountaintops of the Giants. The name of the boss is Ancient Hero of Zamor.

In Weeping Peninsula, Ancient Hero of Zamor can be found near Fourth Church of Marika. On our map, It is the site of grace #17

In Altus Plateau, Ancient Hero of Zamor can be found in Sainted Hero's Grave. On our map, it is the site of grace #7.

In Mountaintops of the Giants, Ancient Hero of Zamor can be found in Giant-Conquering Hero's Grave dungeon. On our map, it is the site of grace #2.

The ancient hero of Zamor is an optional boss - you can skip him and still complete the game successfully. 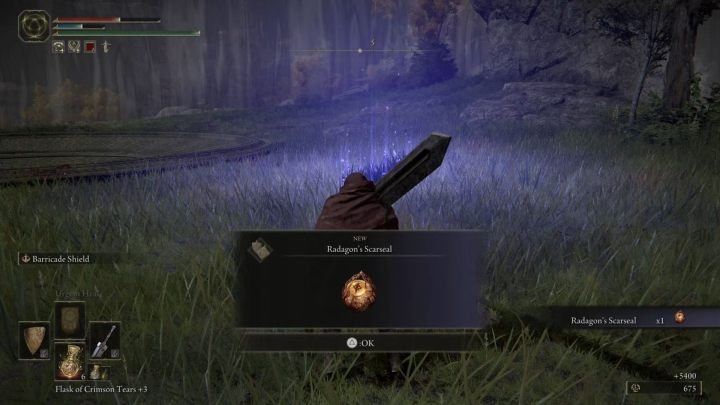 For defeating the Ancient Hero of Zamor in Weeping Peninsula, you will receive runes (5400) and Radagon's Scarseal amulet . 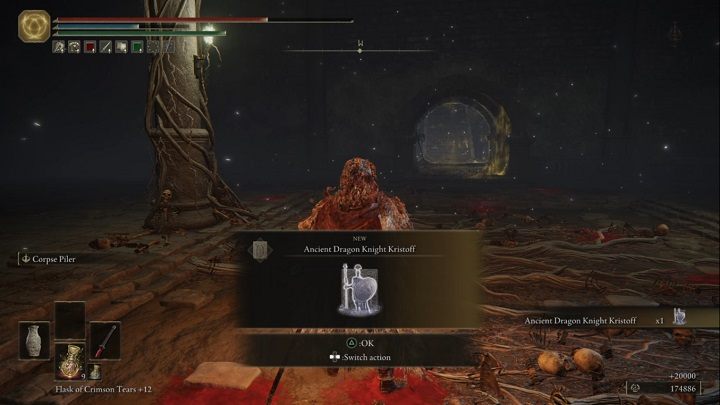 For defeating the Ancient Hero of Zamor in the Altus Plateau, you will receive Runes (24,000) and Ancient Dragon Knight Kristoff Spirit Ashes 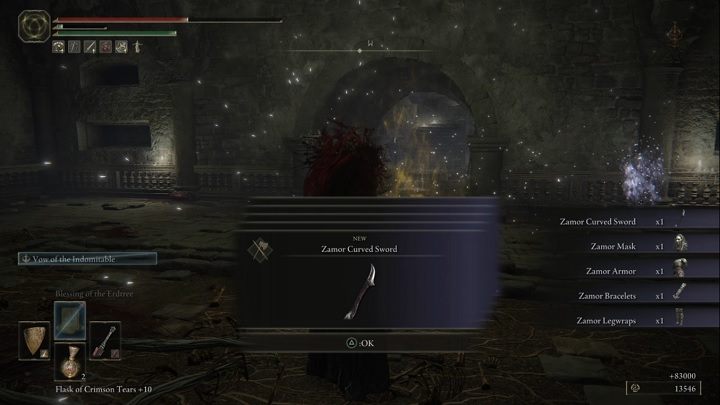 For defeating the Ancient Hero of Zamor in the Mountaintops of the Giants, you will receive Runes (83,000) and a item set consisting of the following elements: Zamor Curved Sword , Zamor Mask , Zamor Armor , Zamor Bracelets and Zamor Legwraps .

The Ancient Hero of Zamor is an agile opponent that can be a big problem for a mage. If you have fast spells, such as Glimstone, remove them from the active spell slot before starting the fight. Each time you cast a spell of this type, Zamor will jump to the side a long distance, making you miss. 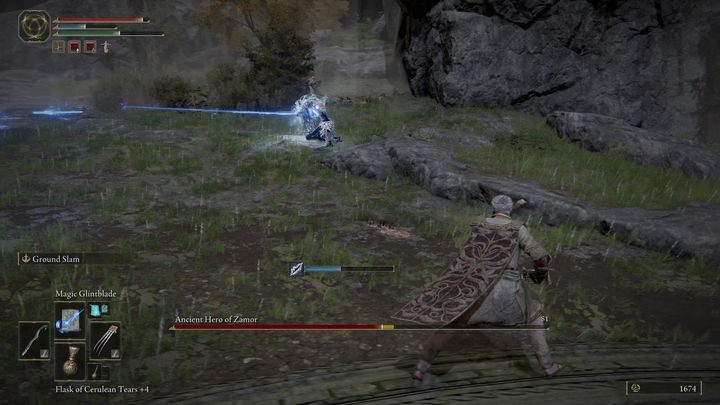 A much better solution is to equip slower-casting spells, such as Magic Glintblade. Zamor will start to dodge the moment you cast the spell, not the moment the projectile starts flying towards him. You will be able to cast 3 such projectiles and then stop creating the next ones. 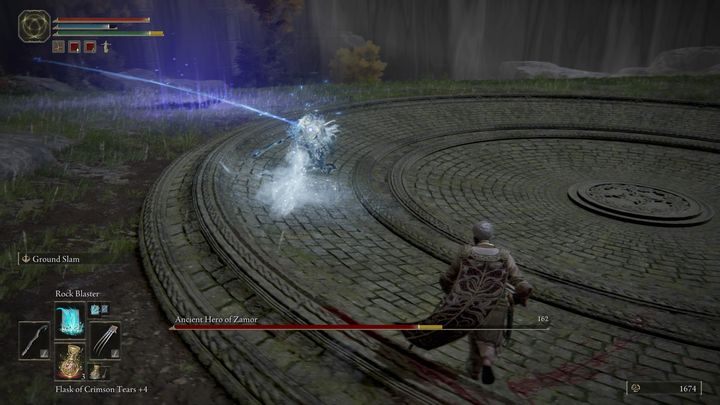 If you create more than three projectiles, Zamor will avoid the first one, because while creating the fourth spell, the first one will already materialize and start flying at the opponent. 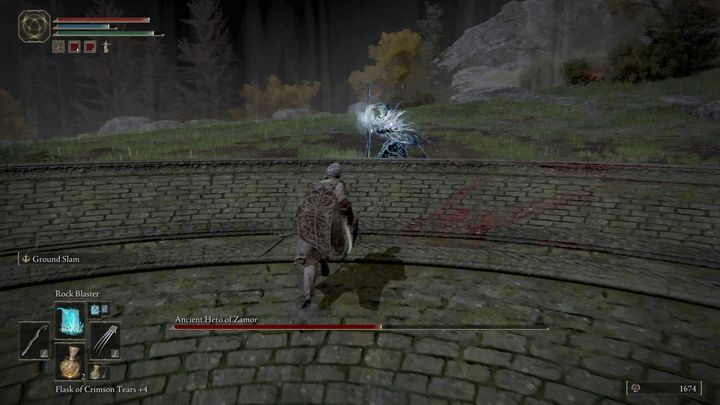 When the enemy starts using ice spells, run to the side. You can then use a more powerful spell that takes longer to cast. You can do the same when the second phase begins. It starts when Zamor kneels down. 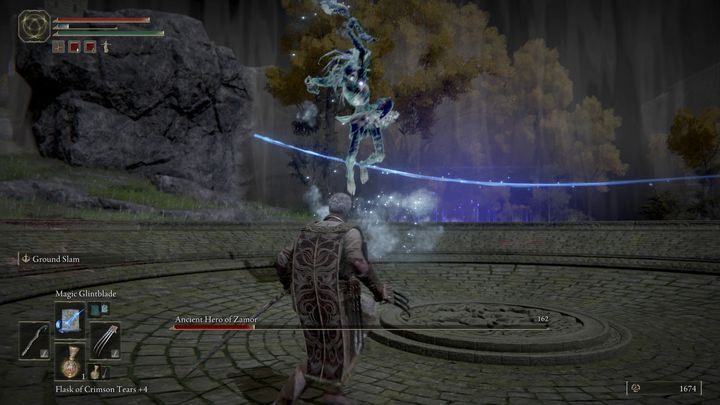 Watch out for Zamor's leaping attack, not only because of the high damage, but also because you can miss him with a projectile. Cast spells when he is on the ground and as far away from you as possible.

In the meantime, watch out for his ice attacks, as they cause frostbite. It is best to put on equipment that protects you from this status before starting the fight.

The fight is divided into two phases. The first one shouldn't cause you any problems. The opponent makes two slow swings with his weapon, which can be easily avoided by dodging twice in a row or by keeping your distance while sprinting. Wait for the boss to perform his two swings, then attack with one or a maximum of two basic attacks with your weapon. A strong jump attack will also work here.

In the first phase, you take the offensive initiative by overwhelming the enemy with attacks. The boss can also attack with freezing breath, which causes frostbite status. This is a slow attack with a long animation. Dodge to the side and attack your opponent until the freezing breath is gone. 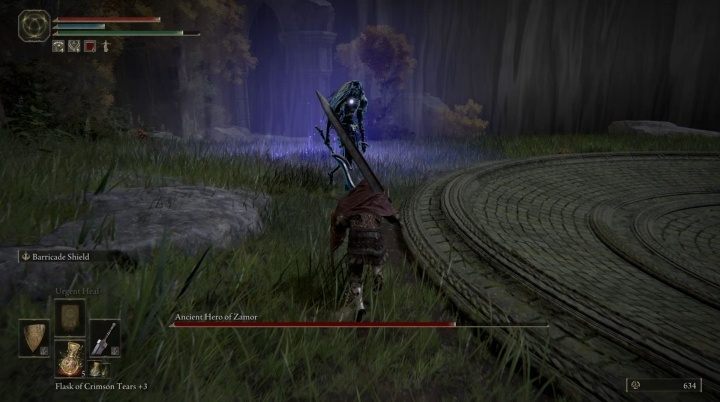 The second phase starts around 50% of the boss's HP. The opponent enhances his weapon with ice magic and becomes much more aggressive. You have to go into the defensive. The boss will start making quick charges to shorten the distance between you. When that happens, dodge backward. 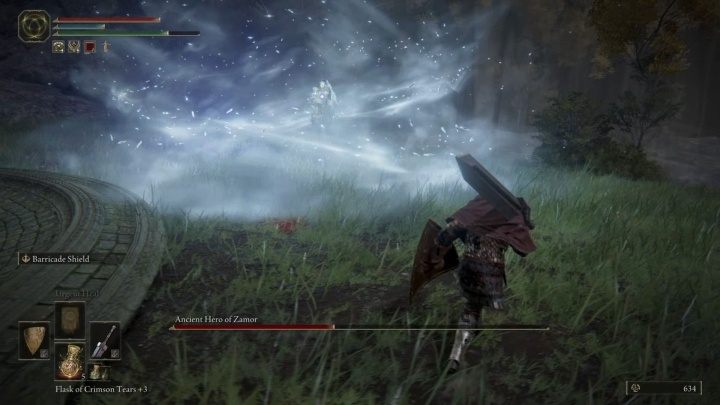 During the second phase, the enemy will attack more often and use an area of effect ice attack that will surround the enemy. Stop attacking and sprint away to avoid splash damage.

In the second phase, approach the boss to make him use a series of two or three attacks with his weapon and patiently counterattack him.