The boss is in the Stormveil Castle. It is a mandatory boss, required to complete the game. You will reach the boss arena by going through the fog near the Site of Grace called the Secluded Cell.

Godrick the Grafted at Stormveil Castle: 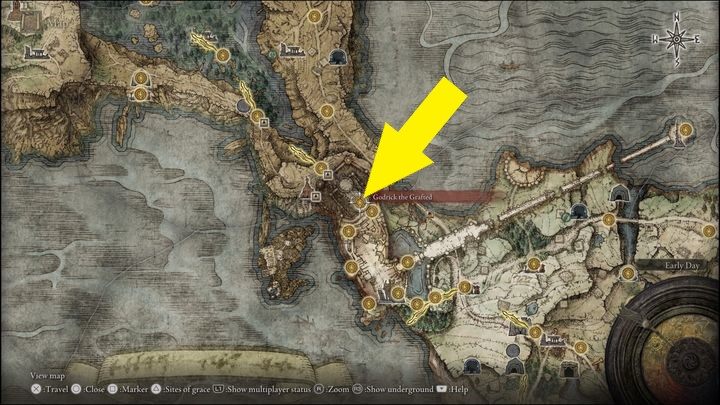 The real version of the main boss can be found in Stormveil Castle.

Godefroy the Grafted in the Altus Plateau: 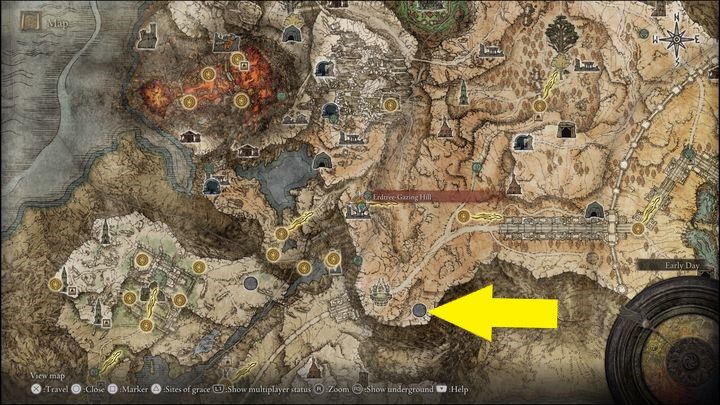 The second version of the boss is can be found in the Altus Plateau, more specifically in the Golden Lineage Evergaol.

The reward for defeating Godrick the Grafted is Godrick's Great Rune. To use it, you need to restore its power - this will progress the story. In addition, you will receive the Remembrance of the Grafted and 20,000 Runes. 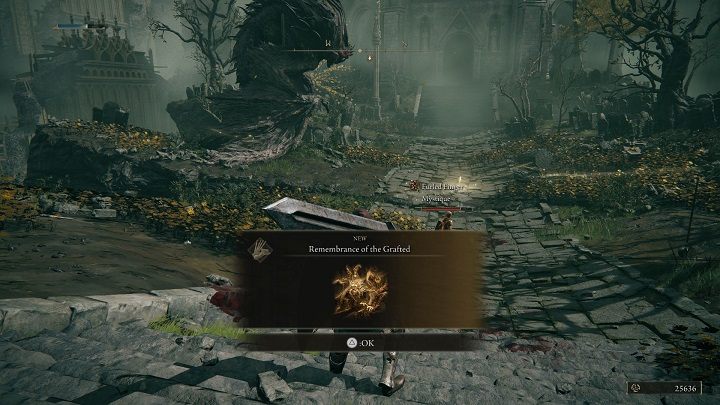 Godrick is a very agile and fast boss for his size. Therefore, your projectiles should be used when the boss is standing still or has finished rolling sideways. After entering the arena, it is worth summoning reinforcements that will help you in combat. Unfortunately, a pack of wolves or demi-humans is not necessarily a good choice here, as Godrick has many area attacks. 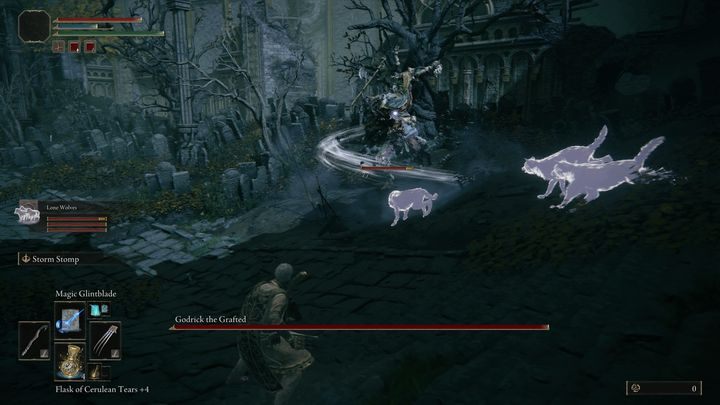 However, if you don't have ashes that summon a single, stronger ally, you can use wolves to keep Godrick busy for a moment. 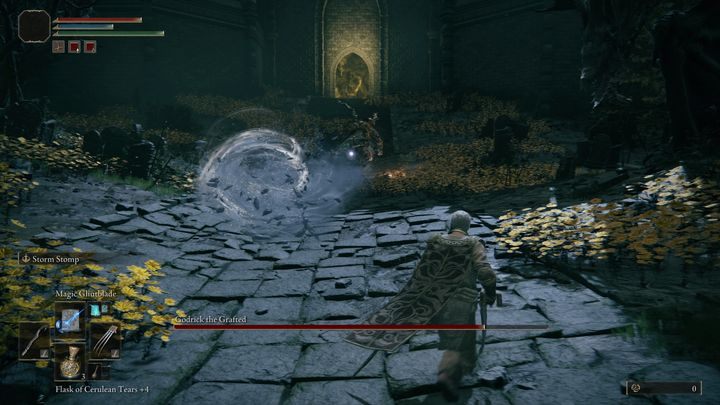 Although playing a mage should encourage players to keep their distance, in the case of fighting Godrick, the best possible solution is to keep mid-range instead of fighting from far away. Mainly due to the fact that after rolling, Godrick can you one of the two different attacks, depending on the distance between you and him. If you stand farther, he will create gusts of wind that will deal a lot of damage. 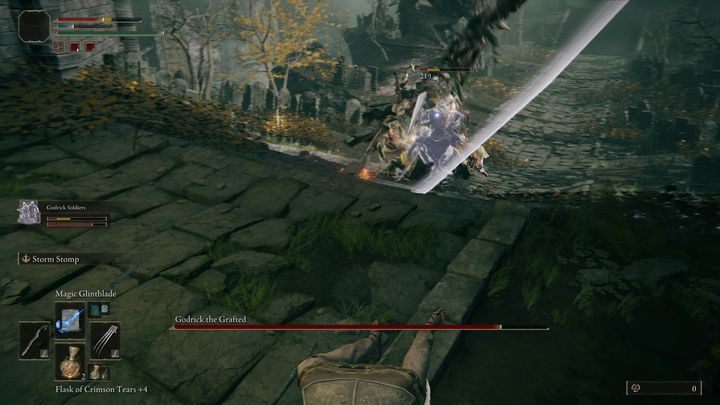 When the distance between you and Godrick is not too big, he will jump on you instead of creating gusts of wind and attack when he lands. This attack deals more damage, but is much easier to dodge. 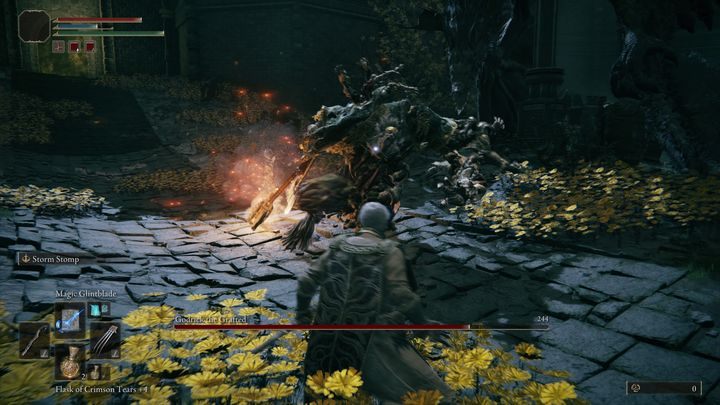 Also, watch out for an attack signalized by Godrick dragging his weapon on the ground. After a while, he will attack with a straight strike. There are many ways to avoid this attack. If you are keeping a long distance, go back. If the boss is close to you, shorten the distance and run behind the his back. The boss will not attack immediately when this animation starts. 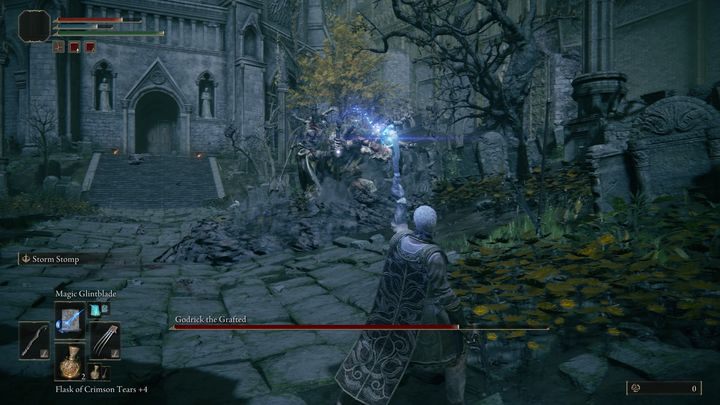 Remember to use spells whenever you can to lower Godrick's health bar as quickly as possible. When Godrick has around 55% of HP, he will kneel for a moment - this will grant him a significantly increased defense against all damage. Don't attack him with magic - save the mana. 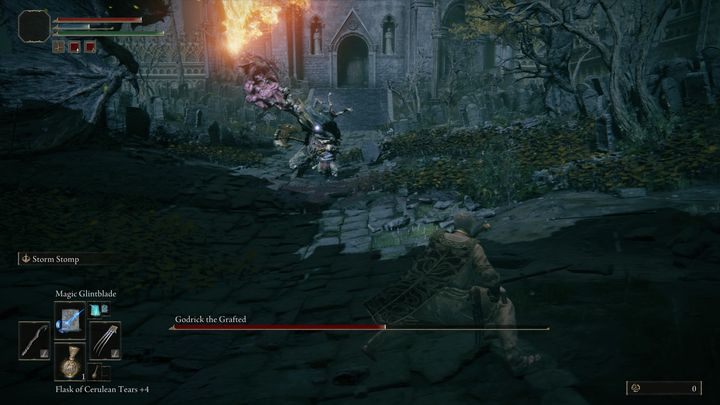 After kneeling down and cutting off one of his hands, you will watch a cut-scene. After that, you will start the second phase of the fight. Go backwards - Godrick always starts this phase by breathing fire. 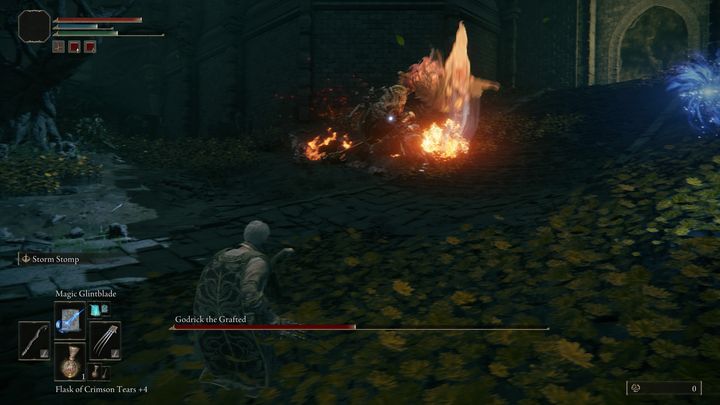 Most of his attacks will be similar, but he strengthens them with fire. It will be a good idea to equip a medallion for this phase that significantly reduces fire damage. 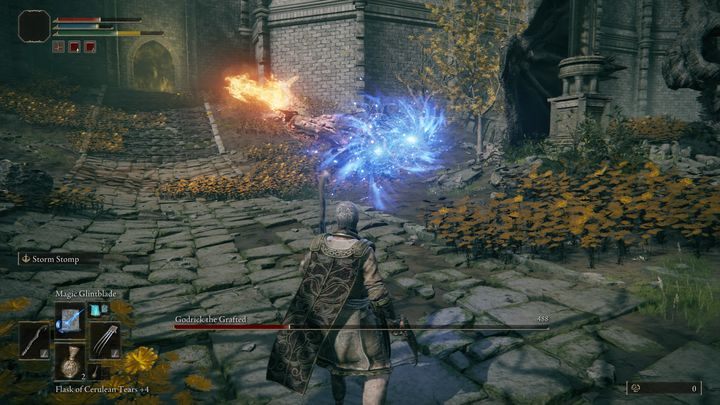 It's also good to have a melee weapon that inflicts bleeding. When fighting Godrick, there's a good chance that you won't kill him with magic alone, as you simply won't have enough mana-restoring bottles. Godrick, on the other hand, has a very low resistance to bleeding, so you can deal him a lot of damage.

However, watch out for this way of fighting. When you are close to Godrick, he will create several gusts of wind around him, throwing your character off balance and dealing damage. Since you are a mage, you won't necessarily have a lot of health and stamina.

You start the fight quite far away from him. This is a good opportunity to throw a few daggers. The stairs here are a good spot to fight. If you are using a short weapon, position yourself under them - it will make blocking or dodging attacks a bit easier. If you are using a longer weapon, stand on the stairs and try to have the boss beneath you. Strong jump attacks can be useful, but they require the right moment to use. If you do not want to risk exposure to attack, use two light strikes and then retreat a bit with your shield raised. 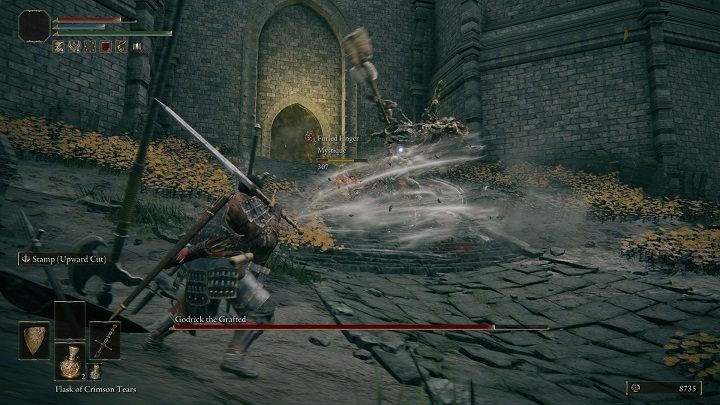 When the distance between you and Godrick is short, he will often surround himself with "tornadoes". This attack is signaled by him swinging the ax above his head. The first two tornadoes are relatively weak, but the third one can deal a lot of damage. Therefore, when you see that he is starting to do this move, get away from him. Be prepared to avoid a devastating attack from above, because after such a tornado, the enemy likes to roll and jump into the air while spinning and then smashing the ground, which can be fatal for you. A good moment to perform a dodge will be when the opponent is in the air for a fraction of a second, or when he is just about to hit you. 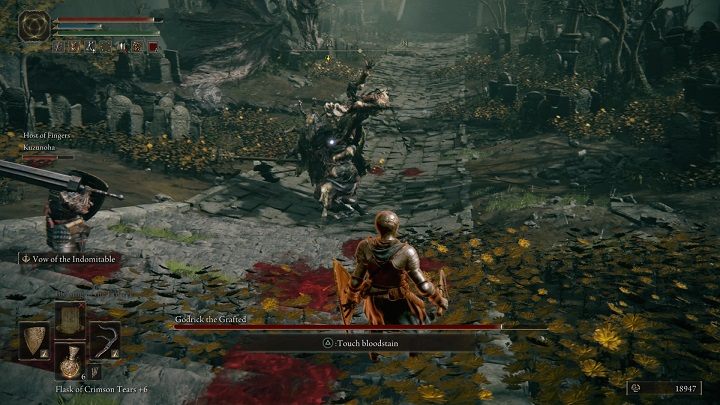 Godrick's another dangerous attack is the one where he laughs while lifting the axes up and then driving them into the ground. The first crack in the ground won't take too many health points, but the second one can kill you. You have about 3 seconds to prepare for the first attack, the second one follows in less than a second. It is safest to move away when he starts to raise his axes above his head. However, you will lose the opportunity to attack after performing two successful dodges.

If you need to heal yourself, move away to at least a medium distance. If you fight together with Nephela, you will have many opportunities to heal - the warrior is very good at drawing his attention. 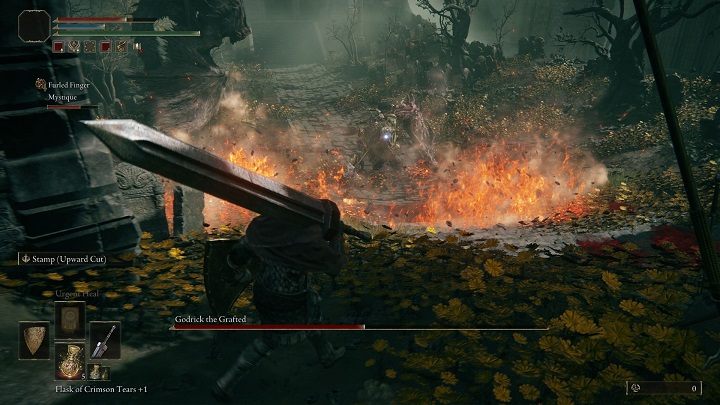 If Godrick starts screaming with great pain, the fight is moving into its second phase. A cut-scene will start. After that, run back to the place where you walked through the fog. Or you can run to the other side of the location, depending on where you are. Keep your distance - when Godrick breathes fire, the surroundings won't protect you from it.

When Godrick raises his left hand (the one with the dragon's head) and then stabs it in the ground and spins it, it means he will be bombarding the area around him with fireballs. If you keep an average distance, you should be safe. Otherwise, start circling him to get behind Godrick's back. This way, you will be able to attack him and avoid the fireballs that land relatively far away from him.

If the opponent lifts the scorched and roaring dragon's head up, it means that he will breathe fire and walk forward, shortening the distance. In such a situation, you should run away and try to go behind his back, and then attack several times. 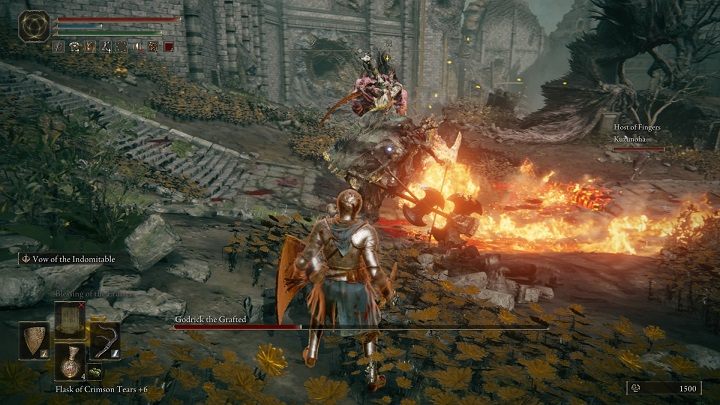 In the second phase, the opponent also surrounds himself with a tornado, but this time it will be enhanced with a fire spell, so it is more difficult to defend with a shield.