This page of our Elden Ring offers tips for the boss encounter taking place in Limgrave, in Black Knife Catacombs to be exact. The name of this boss is Cementery Shade. You will learn how to fight the boss and which attacks you need to watch out for.

This boss can be encountered both in Black Knife Catacombs in Limgrave, and in Tombsward Catacombs on Weeping Peninsula. This is an optional boss that isn't required to beat the game. 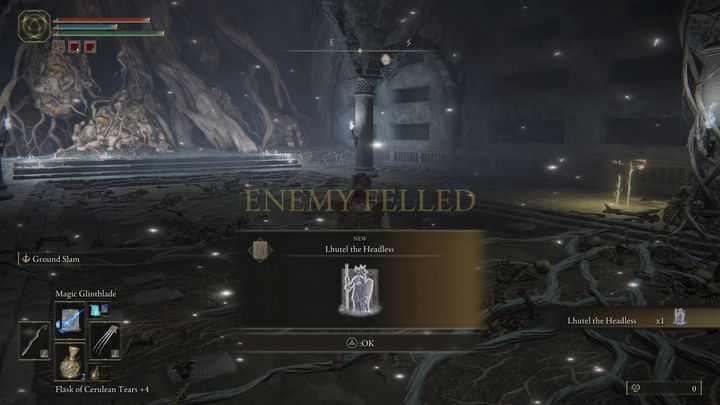 The Cemetery Shade drops the Lhutel the Headless ashes. Thanks to this, you will be able to summon a powerful knight. Summoning costs 106 FP.

When you enter the arena, use the ashes to summon reinforcements - it can be wolves, skeletons or demi-humans. Every one of these spirits will be helpful. 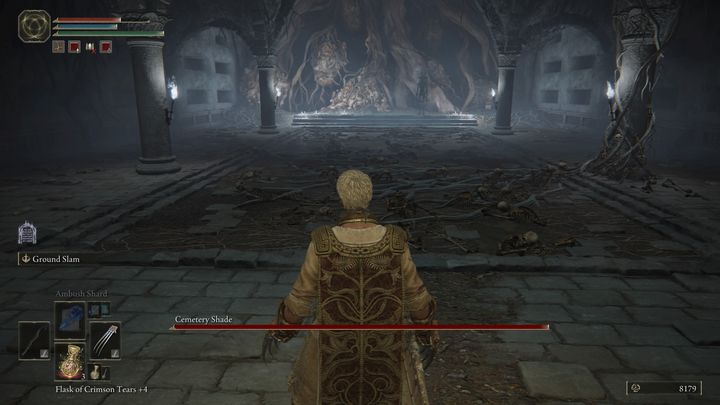 It's a good idea to let the summoned reinforcements attack first. While the boss is dealing with them, start attacking him with spells from a safe distance. However, be careful, as after taking damage, he can very quickly appear right in front of you. 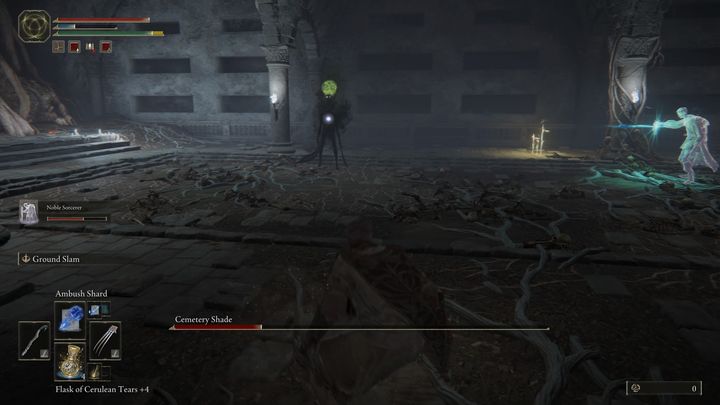 Sometimes, when the distance is quite big, the boss will start to form a green cocoon on its head. After a while, it will fire a projectile that will paralyze you. If it hits you, the boss will come over and grab you, dealing a lot of damage. When the cocoon grows to its maximum size, dodge to the side. Moreover, to increase the chances of dodging, move far away from the boss before he shoots the projectile - this will make dodging easier. 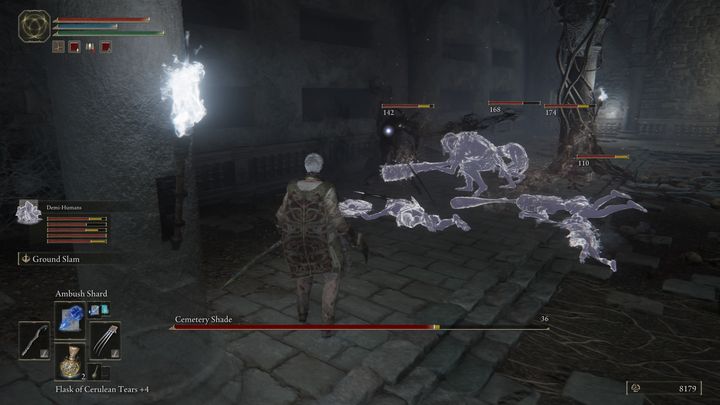 Cast spells whenever you can. Cemetery Shade's weakness is its low health pool. The sooner you deal him damage, the better. Heal yourself only when the boss is far away from you or when he is busy with your summons.

After you enter the arena, you have a moment to use items or ashes that will help you in battle. Consider increasing bleed resistance, as each enemy attack applies this status. 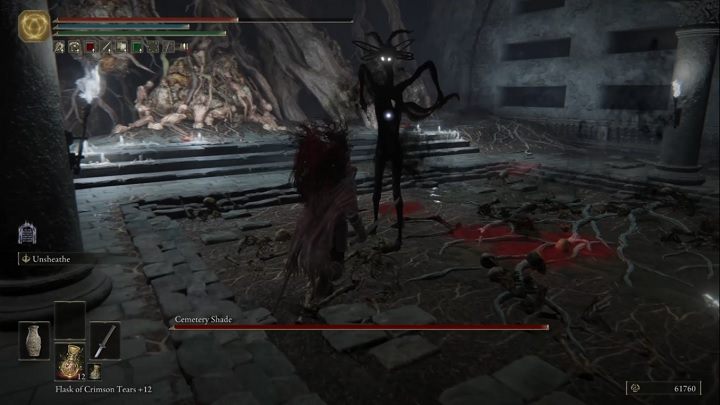 The enemy teleports before nearly every attack, which may seem confusing at first. Especially that sometimes it is done to mislead you and attack at a different time. It pays off to have the shield raised at any time and counter after each successful block. 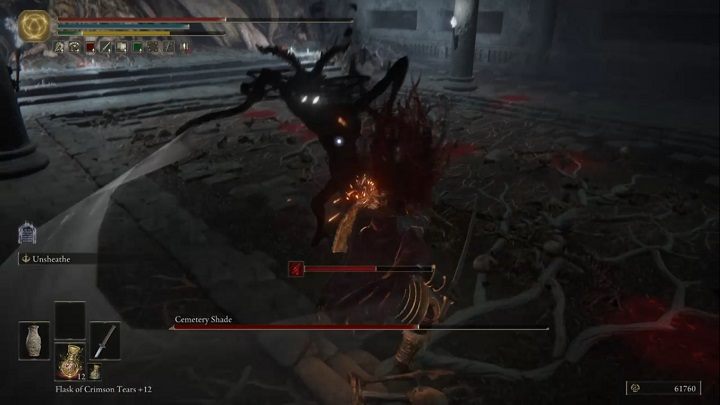 The opponent has access to various attacks. Sometimes, he will attack once (after which he'll teleport again) or peform a combo. If a combo is taking place, it is best to perform a dodge to save stamina. In this case, skip the counter, as you may risk taking severe damage because of the induced bleed. If you're dealing with severe bleeding, use Stanching Boluses. 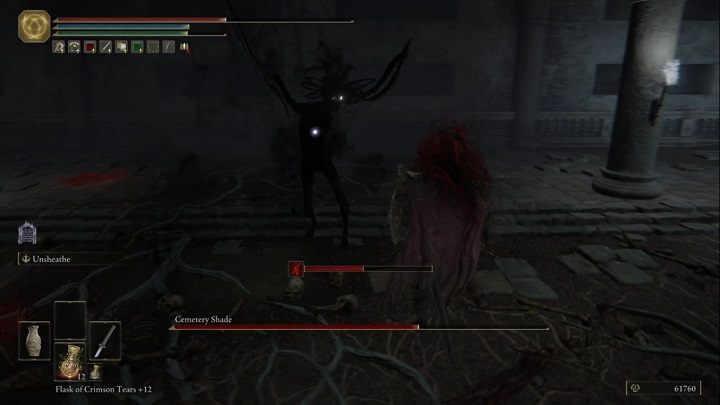 When the opponent raises both his weapons, it means that he is about to perform a quick combo. It is better to dodge in that case, as even a shield won't protect you from bleeding status. Try to roll towards him to get behind the opponent's back. You can attack him once behind. 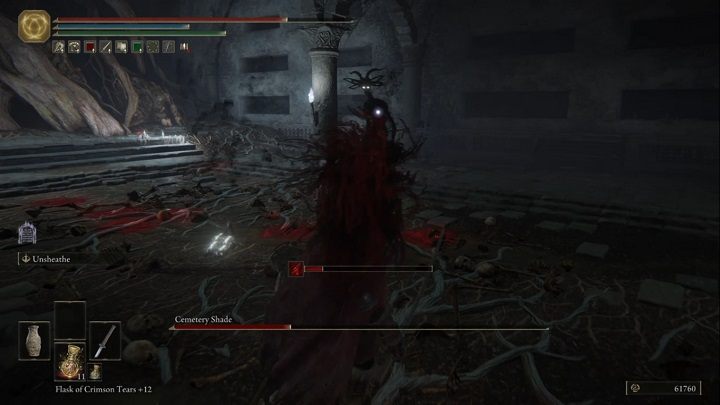 The fight consists of one phase - the enemy doesn't receive new attacks after half of his health bar is depleted. Also, watch out for an attack where the enemy creates a web - you can recognize it by a green "orb" that the boss will start to conjure. If the web hits you, you'll be immobilized for a moment, during which the enemy will attack you a few times.