This page of the guide to Dying Light 2 contains a walkthrough of the Empire main quest. In the following walkthrough you will learn e.g. how to climb the broadcast towers.

If you sided with Frank in the Broadcast quest, you will receive the Nightrunners quest instead.

Meet Jack at the PK headquarters 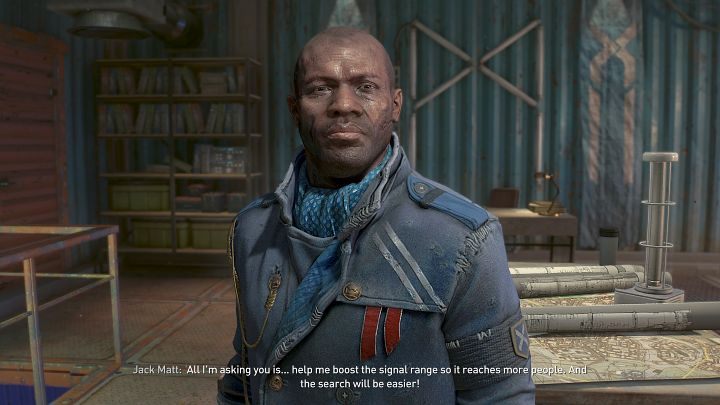 Go to the place marked on the world map and talk to Jack. You will learn that he will only give you information about Waltz after you complete one more task for him - you must take control of the transmission towers.

Go to the first antenna 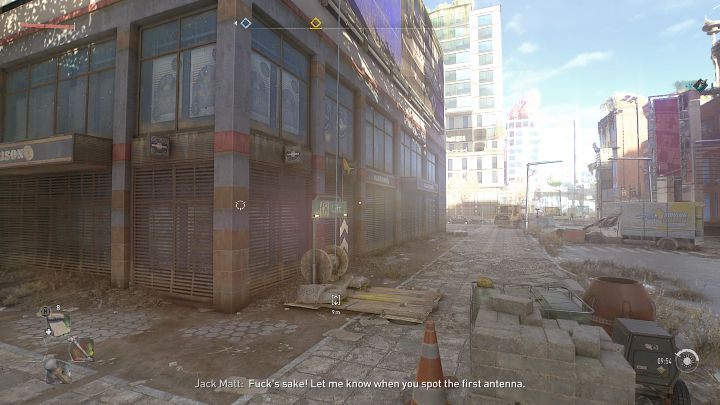 Once you reach the right building, look for the rope with a grappling hook shown in the picture above and go up to the upper floor. 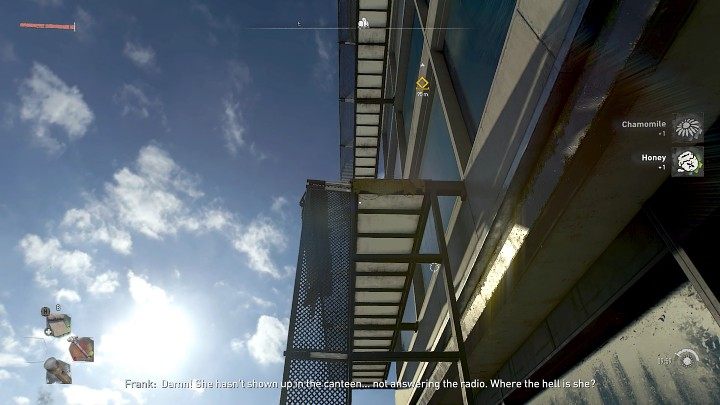 Jump on the ladder and then use the narrow balconies to keep moving forward, as the path leads. You will have to grab the poles or use the grappling hook along the way. 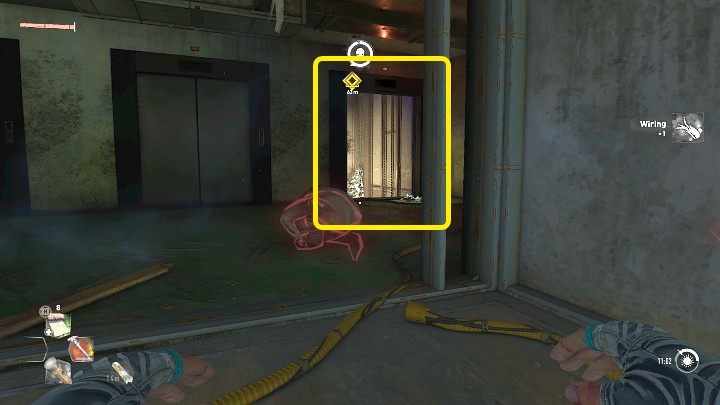 At some point you will have to go inside the building. Watch out for zombies and go towards the elevator shaft, which will allow you to get to the upper floor of the building. 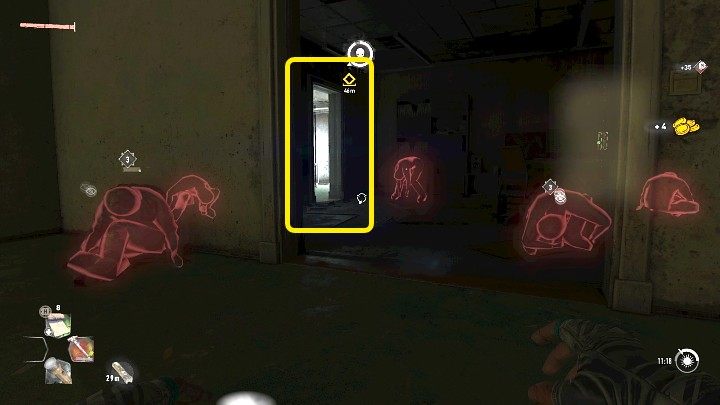 Watch out for the sleeping enemies and sneak into the lit room, then go outside through the hole in the wall and continue climbing on the outside of the building. 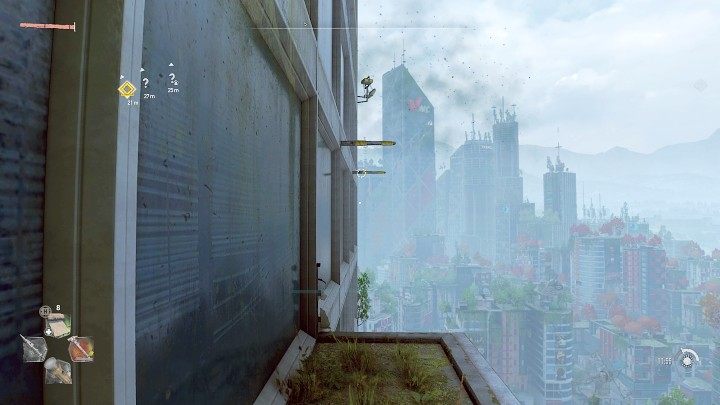 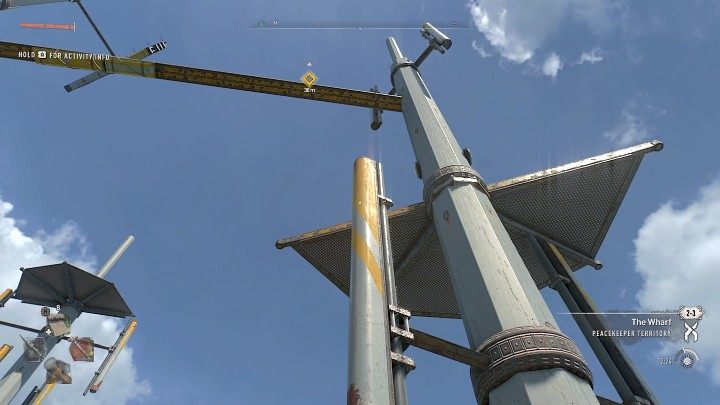 Approach the place shown in the picture above and wait for the vertical pole on the right to line up more or less with the edge of the platform, then jump on it and climb onto the platform. 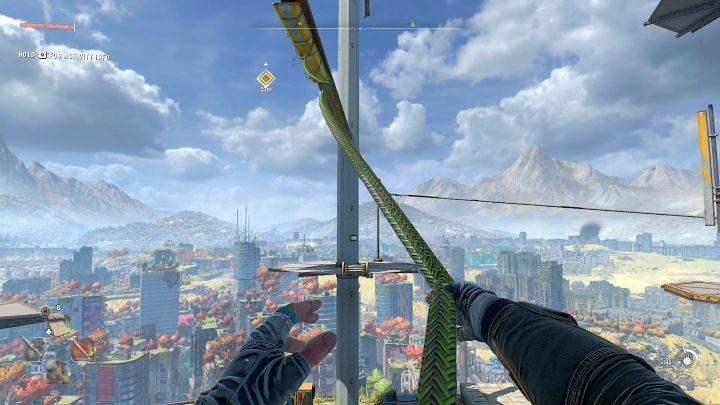 Use the grappling hook to jump to the platform on the opposite side. Before you move on, lower the ladder so you can quickly get back to that point if you mess up somewhere along the way. 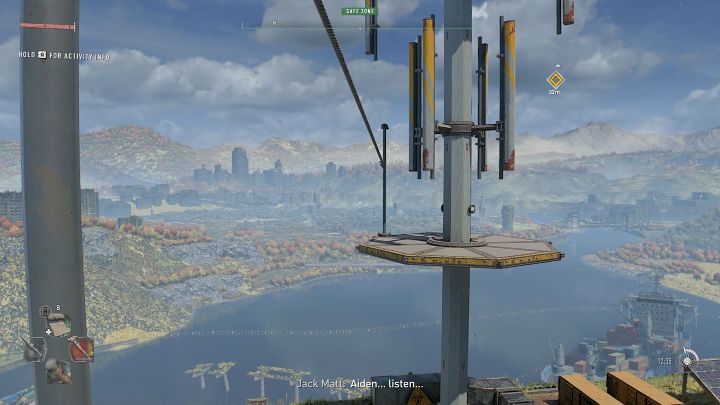 The next stage is much easier, because you just need to grab the rope and slide down to the platform on the opposite side. 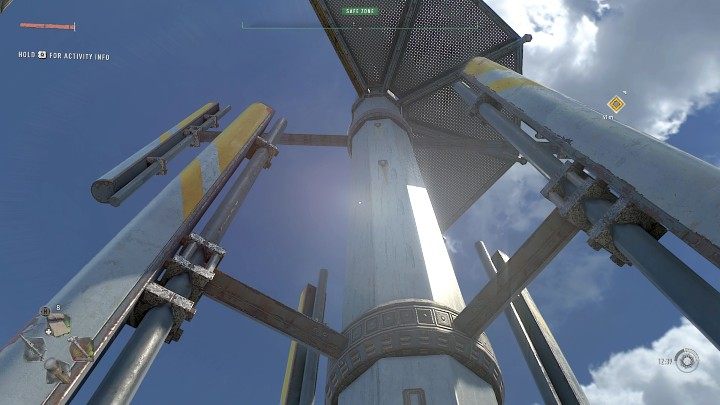 Now look up and climb one of the lower poles, then jump from it to the pole under the metal platform and climb up. 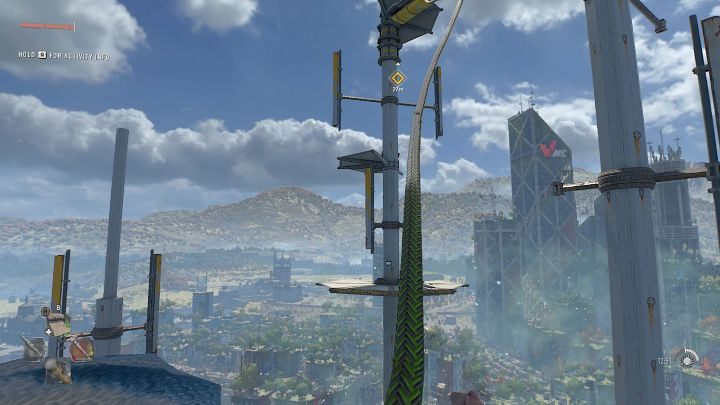 Use the grappling hook and jump to the platform on the other side. Before going any further, lower the ladder so that you can quickly return to this stage if necessary. 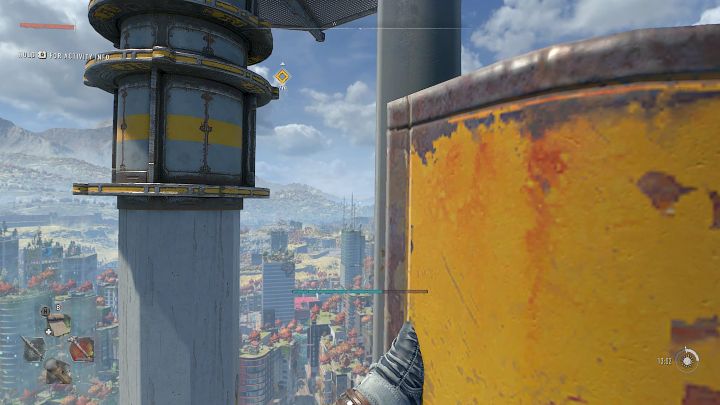 Jump onto one of the rotating poles and climb to the upper floor. Grab one of the poles again and jump from it to the yellow hoops, which will allow you to climb to the very top. Activate the antenna to proceed to the next part of this quest.

Disable the cannon before the Renegades destroy the antenna 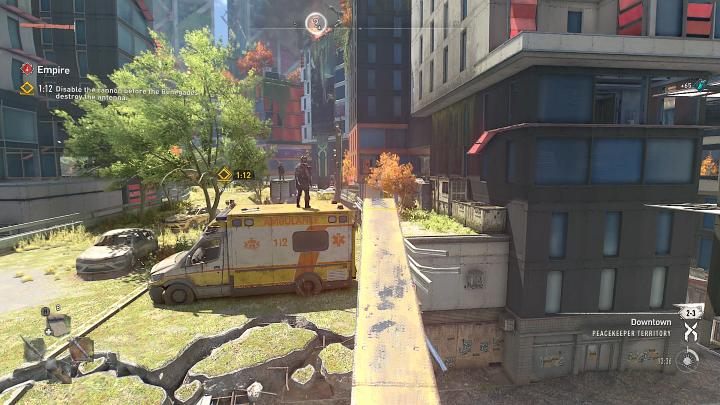 You must complete this part of the quest on time - keep going and run straight to the quest marker. Several enemies defend the access to the cannon, but they shouldn't cause you much trouble - to save some time, you can shoot them with a bow. Snuff out the fuse after the fight.

Turn on the second antenna 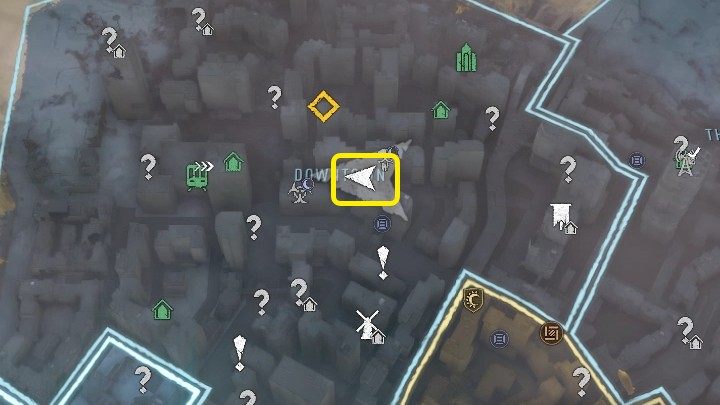 Go to the place marked on the map. In the place shown in the picture above, you will find an elevator that will make it easier for you to reach the roof of the building. 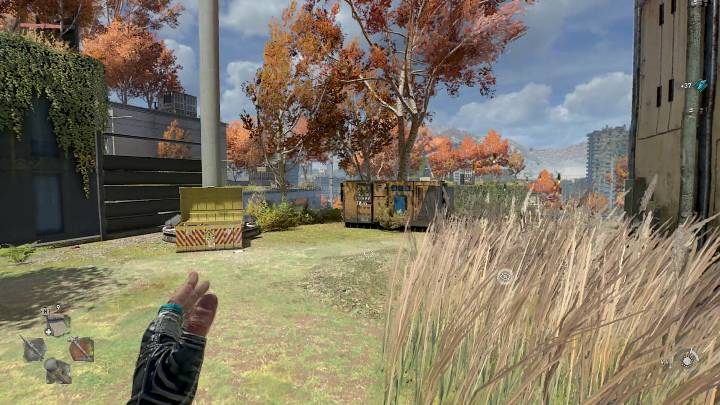 Fortunately, you don't have to climb anywhere to the second antenna. Just go to the control panel and turn it on.

Stop the Renegades from destroying the antenna 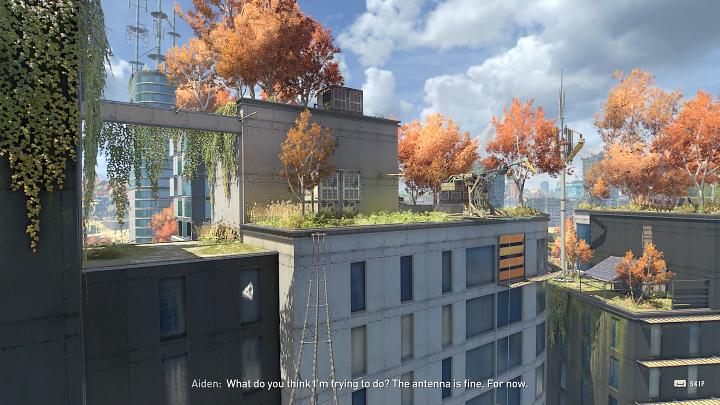 The next part is again time-limited, so follow the path shown in the picture above immediately to reach the first cannon fast. 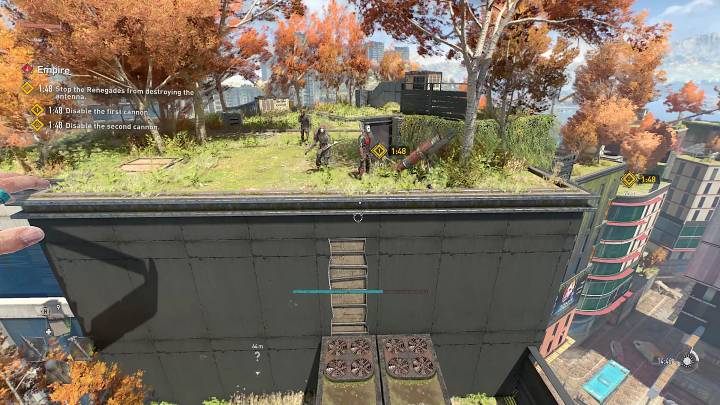 Deal with the first group of enemies and snuff out the fuse of the first cannon. Move to the second location immediately. 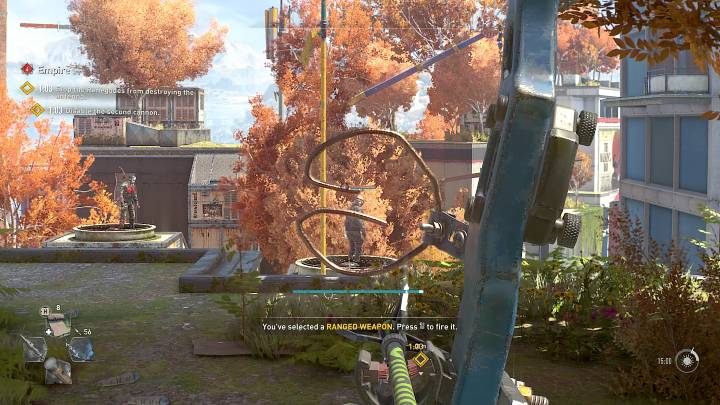 Eliminate the second Renegade squad and neutralize the last cannon to move on to the next part of this mission. 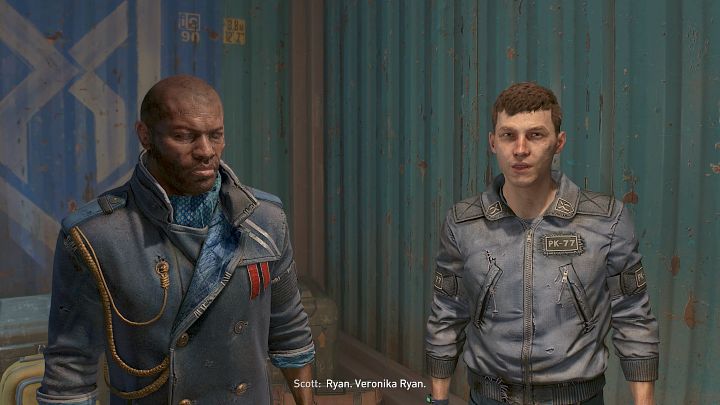 Go to the PK headquarters and talk to Jack. After a short conversation, the Empire mission will end and you will automatically move on to the next story mission, Veronika.