On this page of the Dying Light 2 guide, you can find a walkthrough of the Nightrunners main quest. The walkthrough will describe how to climb to the roof of the skyscraper with a military antenna, how to reach the second antenna, where to meet Hakon and how to defeat Hakon.

Meet Frank at the Fish Eye 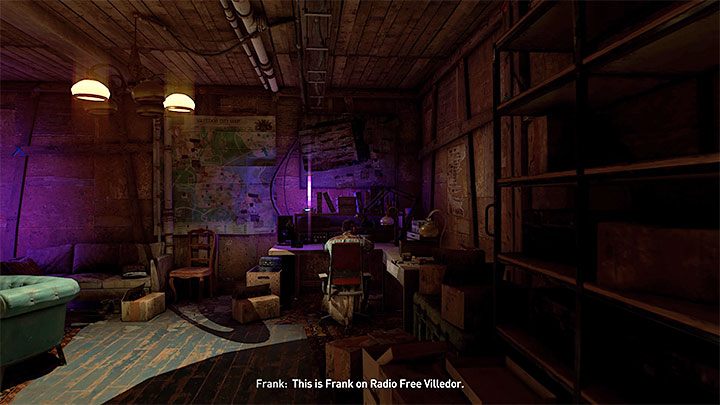 You must travel to Fish Eye. You'll find Frank in the radio station room, where he resides ever since the Broadcast quest. You can optionally ask him some questions or immediately agree to his plan.

Go to the military antenna 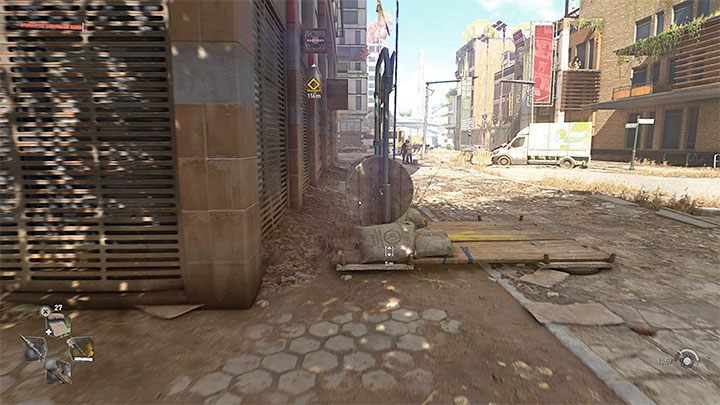 Your destination is in The Wharf district. It's a radio tower antenna on a skyscraper's roof. Unfortunately for you, this means a long climb. You can't use the paraglider to land on the rooftop, as the antenna is on the tallest building in the area.

You can start climbing from the street by using the first elevator (pictured above). 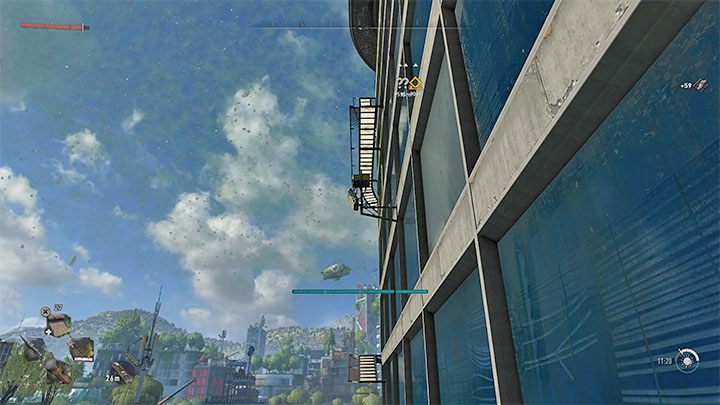 You can find many useful objects during your climb:

Along the way you can perform some wall-running and look into small rooms on specific floors - this will let you find, among other things, an inhibitor crate. 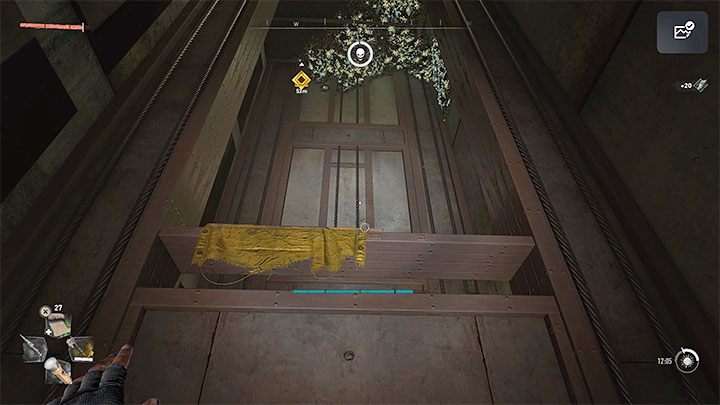 Part of the climb takes place inside the building and involves climbing to the top of an elevator shaft. The in-door parts may turn out to be easier, as falling won't always equal your death. 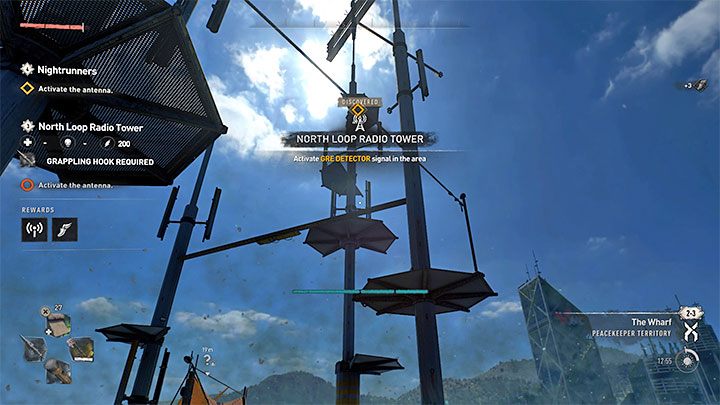 There's a new radio tower on the roof and you must climb to the top, just like during the Broadcast quest. This time the climb is unfortunately more difficult. 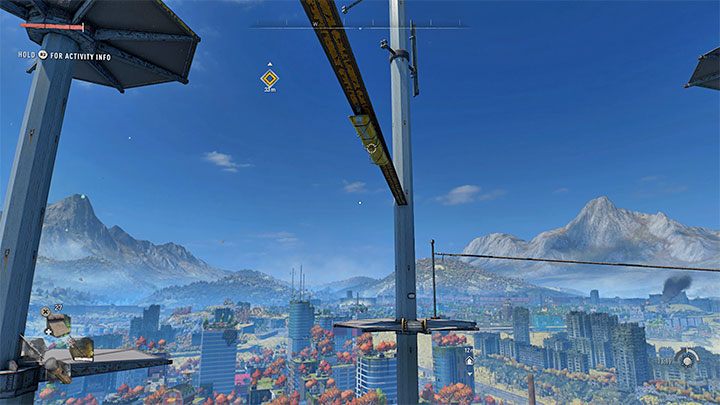 Remember you can grab onto the vertical elements of the tower and climb them. Your grappling hook will come in handy once again - in the place pictured here you can grasp the upper grapple point and swing to the opposite balcony.

You should lower ladders as you climb, this will let you resume climbing from the last big platform rather than from the very beginning if you make a mistake. 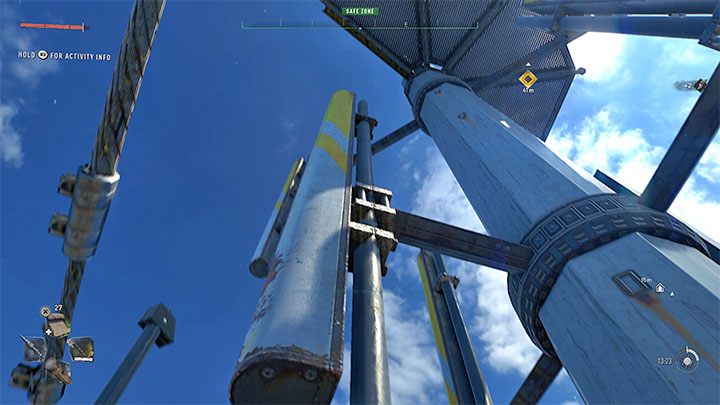 Go down a zipline. In the next section some vertical elements move, forcing you to grab onto the subsequent ones at the right moment - face them and wait for the perfect time to press the jump button. Do not climb too slowly though, you may run out of stamina and fall.

During the upper part of the climb once again use the grappling hook to reach a distant round balcony. Finish your climb to the top and open the box. You must also use the switch next to the box to set the correct frequency.

Go to the second antenna 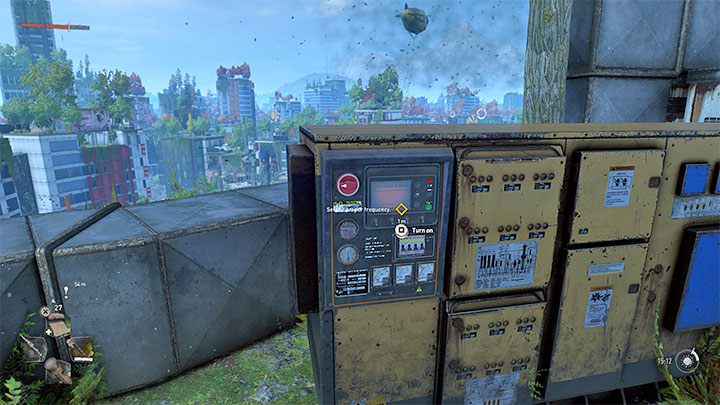 The second antenna is south from here (fortunately it's not as high as this one was) and you can use your glider to reach it.

If you land lower than the antenna you'll have to make a short climb to the roof. If you landed correctly you can immediately start dealing with a renegade group you'll find here (there's also an airdrop here), you can try throwing them off the roof for easy kills. After the battle find the new interactive panel.

Go to the old offices on Garrison Boulevard 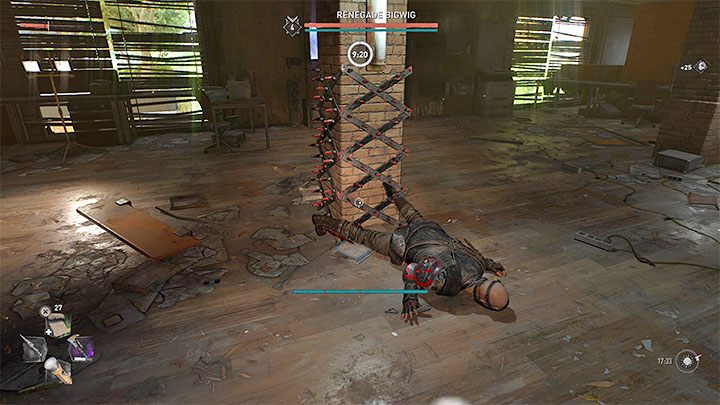 Your destination is the door inside one of the skyscrapers you can easily reach from the outer balconies.

In a large room you'll encounter a group of renegades led by a tough enemy. There are plenty of spikes in the arena - you can push the renegades into them with kicks and charges. Molotovs will also come in handy to set enemy groups on fire. When fighting the leader, focus on dodging his attacks. 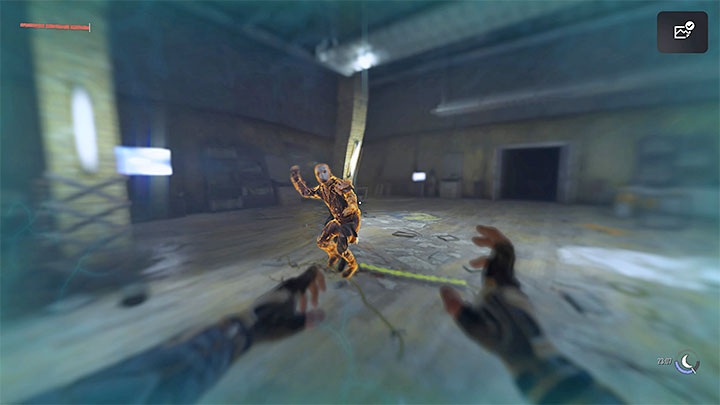 More renegades will keep coming and coming, which is justified by the story. Sooner or later Aiden will get knocked down, but it doesn't mean a game over - you'll turn into a monster once again. Use your "beast mode" to disoatch the remaining enemies.

After the battle Frank will appear. You can ask him an additional question or agree to go meet Hakon right away. 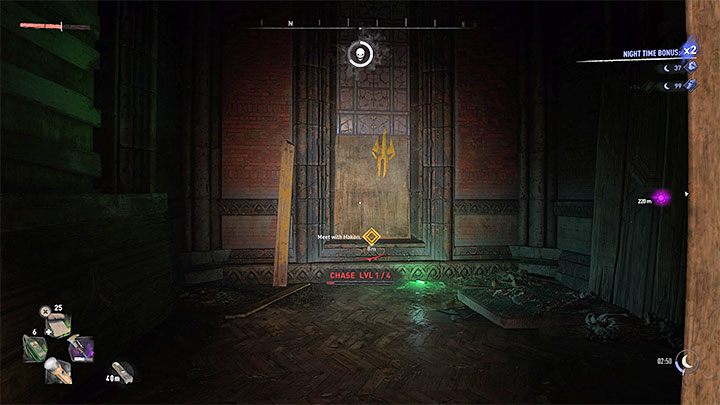 Head to the Lower Dam Ayre district. You must reach the Church of Saint John of God.

After entering the church reach the movable planks and jump down into the main hall. 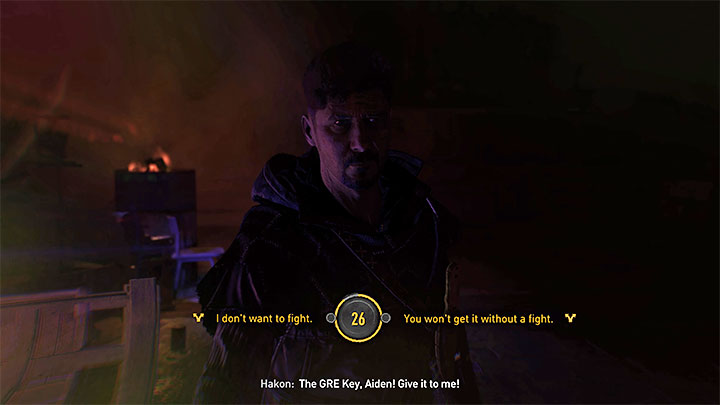 You'll start a conversation with Hakon during which you must make a choice under a time limit - decide whether you wish to duel him or not. 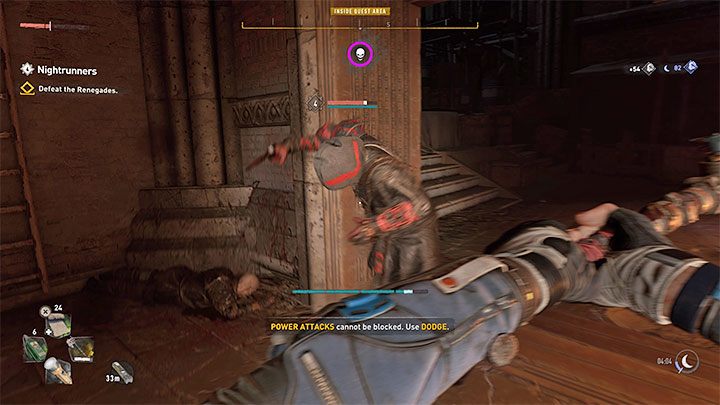 You have to battle a large group of Renegades first. There are archers on the elevated balconies who can be problematic. You can hide from their arrows or prioritize killing them. Use the opportunity to collect valuable supplies (including healing items) in the area. 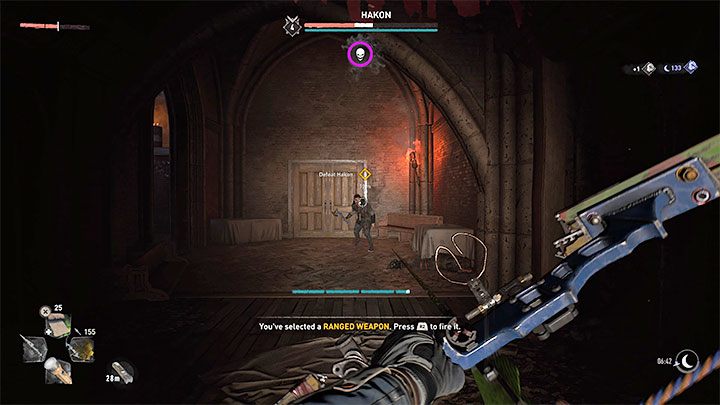 Hakon isn't a very challenging opponent, he doesn't have any "powers" or unique abilities. You can weaken him at range with your bow, molotovs and other thrown weapons, or fight him in melee. If you choose to fight him in melee, remember he's good at blocking your attacks. Parry or dodge his blows, then counter. 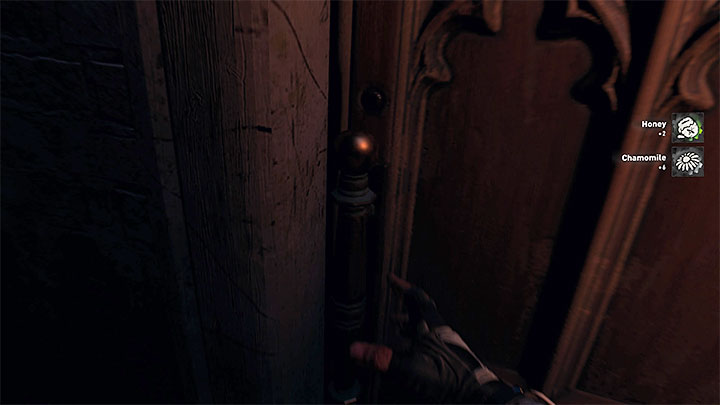 You can't defeat Hakon right away - soon, Aiden will start transforming again. After regaining full control over the protagonist you'll be tasked with finding Hakon who's now hiding inside the church. Find the door pictured here, open them and talk with Hakon again.

He'll throw you back down to the lower level and the second duel will begin. Hakon didn't change his strategy, which means you can rely on the same techniques as before. 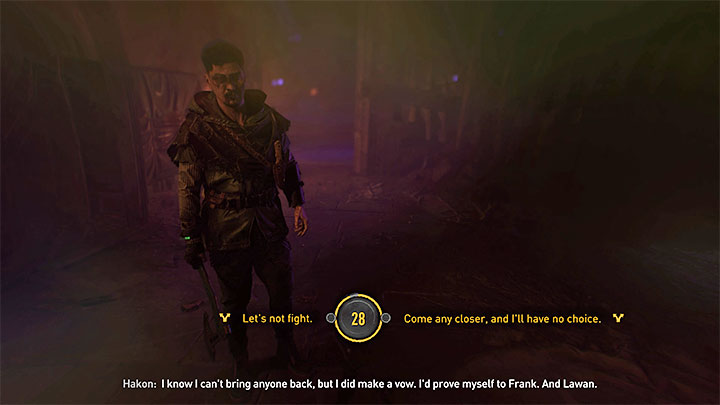 After the fight search his body and try to leave the church. Now you must make yet another choice - tell him you don't want to fight or threaten to kill him.

If you end up fighting Hakon again, this time you'll kill him for good. 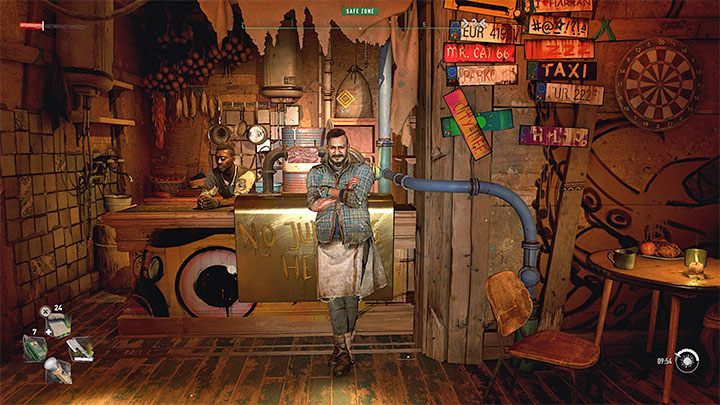 After watching a cutscene showing your meeting with Lawan, you must go to the Fish Eye and meet Frank. You'll complete the quest - the new main mission, Veronika, will start.