On this page of the Dying Light 2 guide, you can find a walkthrough of the Cathedral main quest. You'll learn how to get into the Cathedral, how to defeat Leto in a boss fight, how to turn off the power supply and sabotage the traps, where to find Kurt and how to bring a blue module from the tower to him. 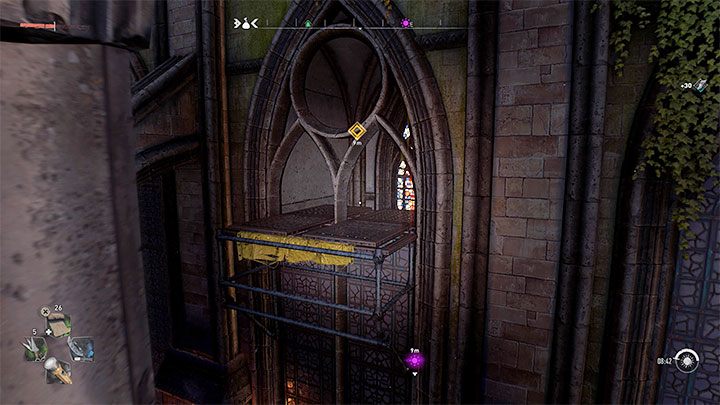 The cathedral is located in the Saint Paul Island district. Before you go there you should unlock a safe zone nearby, in order to respawn near the cathedral in case you die.

Look for a scaffolding at the base of the cathedral. You can jump to the subsequent platforms and ledges marked with yellow until you reach a shutter which will let you enter the cathedral.

Find the specialist in the cathedral 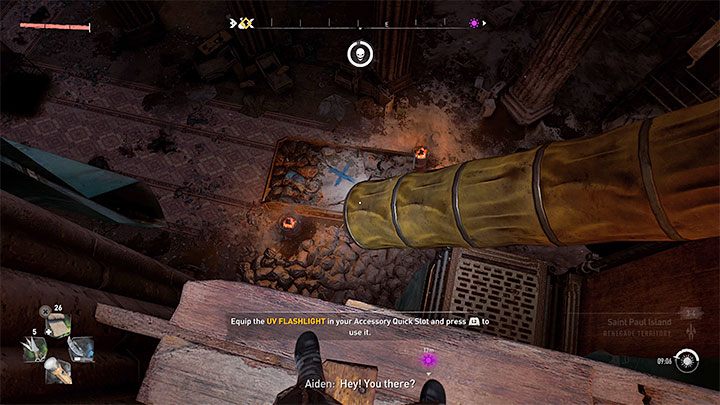 You'll start by exploring the cathedral's upper levels, which means you must watch out not to fall to your death. Walk over the narrow metal balconies, then jump down onto one of the hanging lamps. Look to the bottom and jump, safely landing on the ammortizer (pictured above). 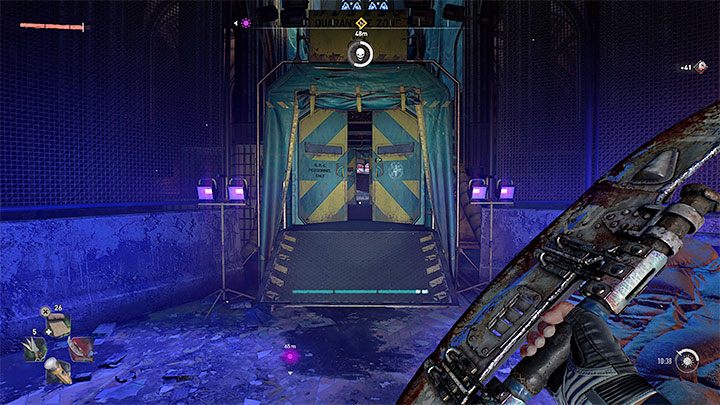 There are zombies in the cathedral but you don't have to eliminate them. You can also find some loot as there's plenty of it here (the most valuable items are in chests with difficult locks).

You must head towards the UV lighting visible from a distance. After reaching the final area take a look at your surroundings - familiarize yourself with them, there's a major battle incoming. Once you try to open the large door you'll trigger a boss fight against Leto. 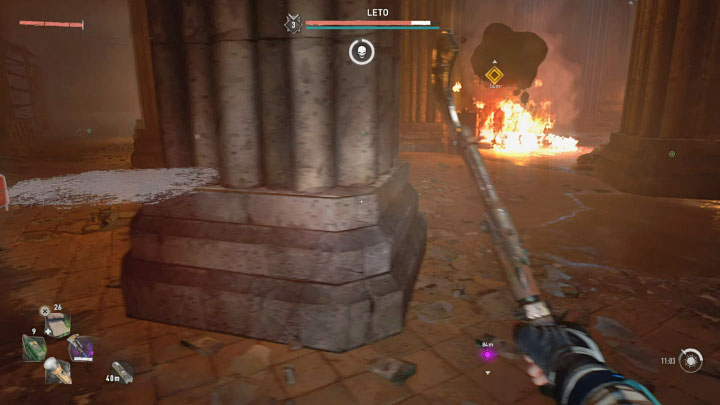 During your duel with Leto you should primarily focus on:

In both cases you should hide behind the indestructible pillars while Leto is attacking. You can also try dodging to the side as a last resort. 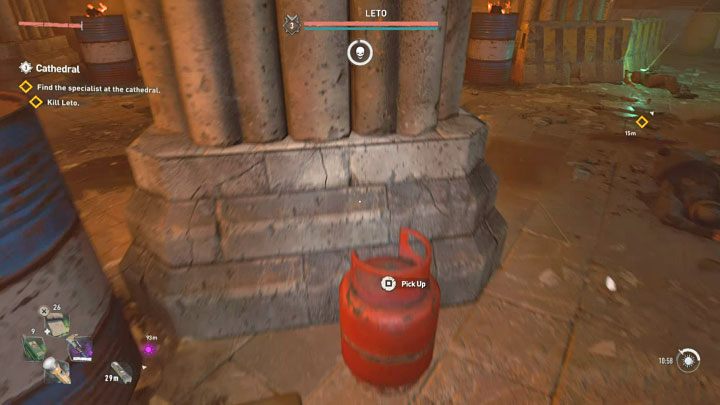 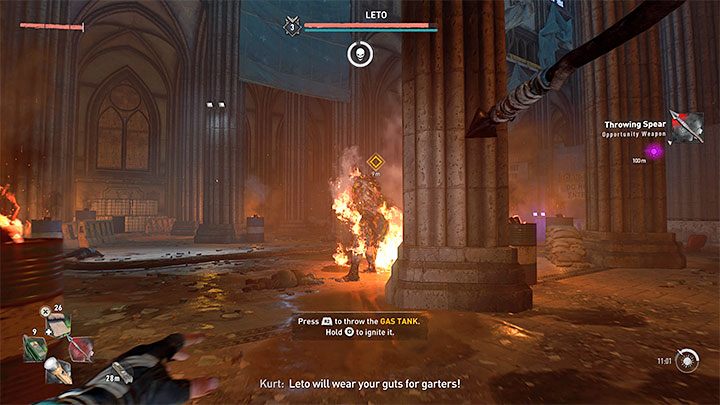 There are two kinds of unique objects available in the arena which can help you fight the boss: 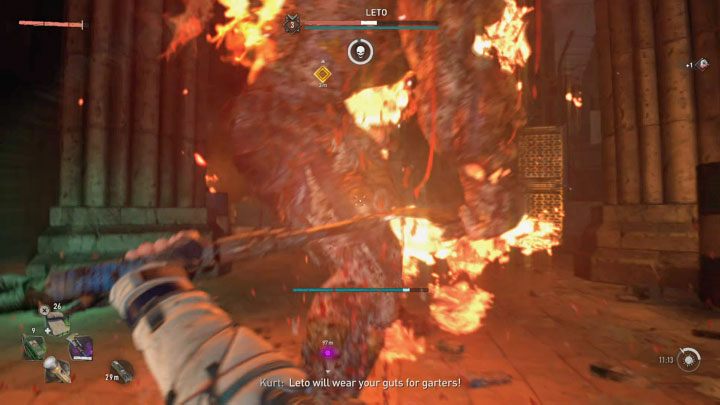 You can attack the boss from a distance with your bow and throwing items (such as Molotovs) or fight him in melee range. If you want to use melee weapons, your best chance to attack is after Leto misses his charge.

During the fight infected may enter the arena. You should eliminate them immediately - they're much quicker than regular zombies and can interfere in your attempts of attacking the boss. 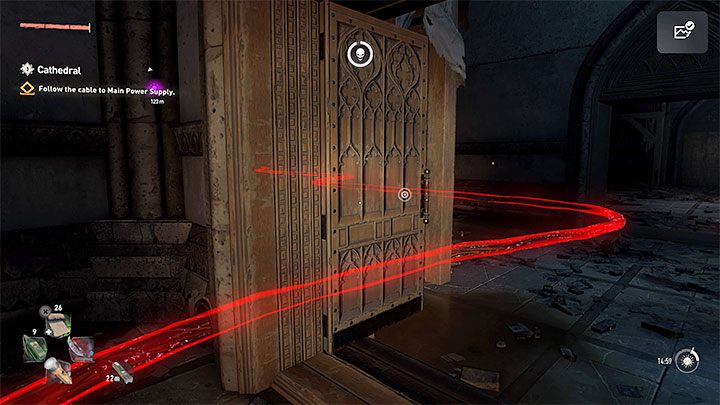 After the battle enter the room Leto ran out of. Kurt is hiding upstairs and activated electric traps. You must now turn them off.

Use your survivor sense. It will highlight a large power cord in red. 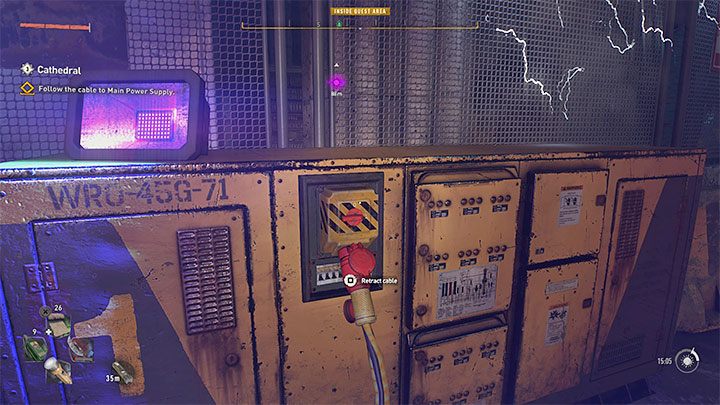 Soon after you start following it you'll find the first generator and will be able to pull the cable out. This won't fulfill the mission objective just yet, but it will disable the electric fence by the generator, letting you proceed. Keep following the red cable. 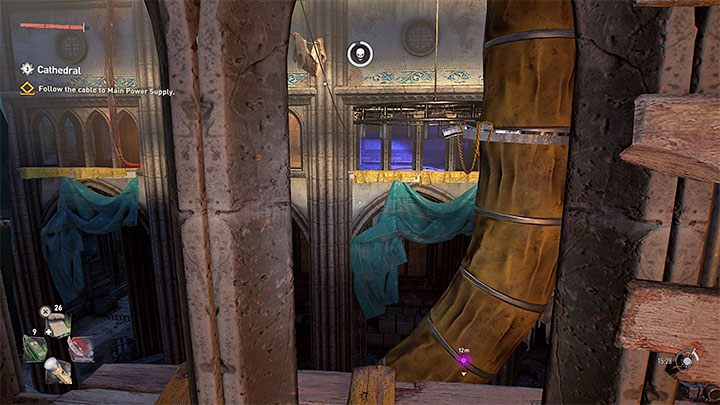 After you disable the second generator nearby you'll be able to climb a ladder back onto the upper balconies. 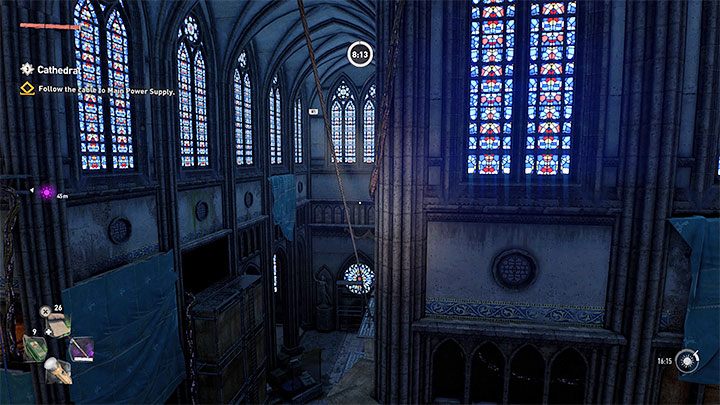 Now go back to the previous area and jump towards the previously omitted hanging object. Be very careful - if you fall here, you'll die immediately with no time to deploy the paraglider.

Keep climbing until you reach the fourth generator. There's a zipline nearby (pictured above). 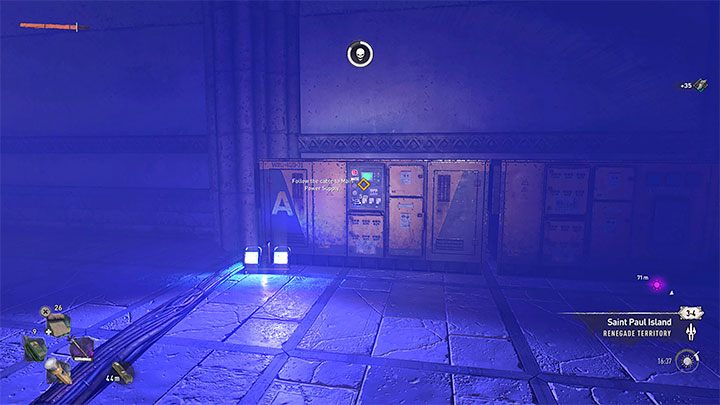 Explore the new rooms while squeezing your way through the planks. After one last climb you'll reach Generator A, and by turning it off you'll disable all the traps. 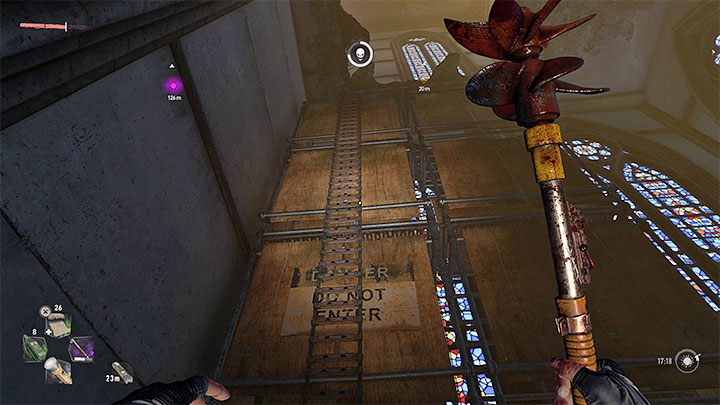 Now you must go back to where you last saw Kurt. You've disabled the traps so you can start climbing to the higher level of the tower (pictured above).

You don't have to explore this new floor but we recommend it, as you can find an Inhibitor chest here, among other things. 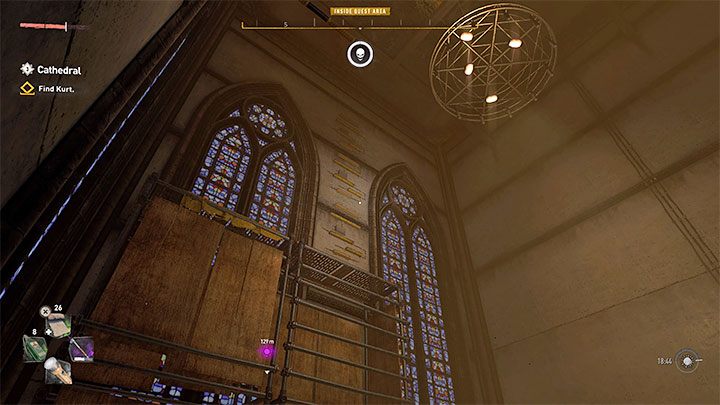 Once you reach the area shown on the picture you must start climbing again - get to the scaffolding, keep grabbing the yellow ledges, jump towards the hanging lamp and then jump to the ledge by the damaged ceiling fragment.

Catch up with Kurt 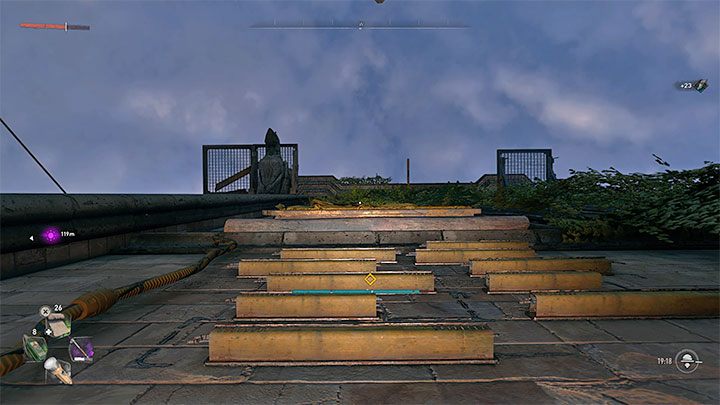 You'll reach a room filled with computers, where you'll find a passageway to the roof and notice Kurt nearby. Head towards the new yellow ledges but watch out not to fall or slip off the roof (you can try climbing back up).

After reaching the top approach the marked door and watch a short cutscene. 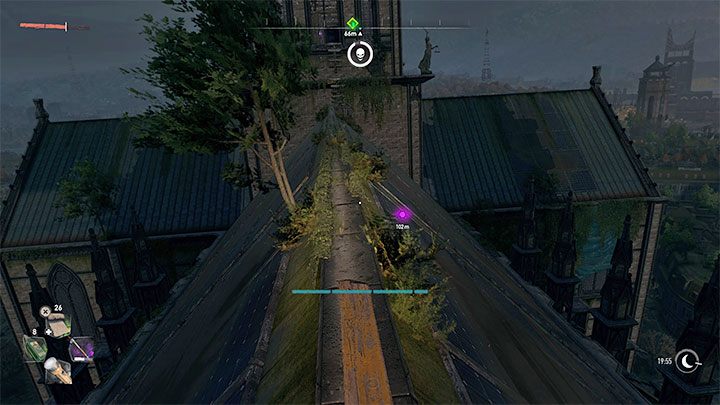 After reaching the next part of the roof, carefully move along the narrow central part. If you start sliding off, you can turn and try to get back up (by rhytmically pressing the displayed button).

Climb the new tower and enter it to confront Kurt. It doesn't matter which questions you ask him (they're yellow but they are exhaustible).

Get the blue module from the cathedral tower 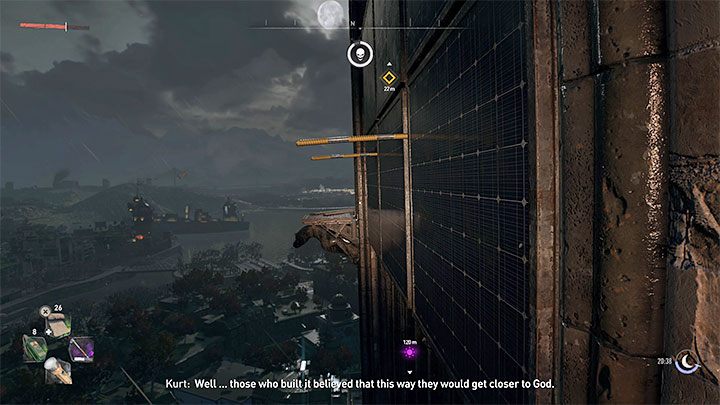 You must now reach the top of one of the cathedral towers. First, carefully walk over the central part of the steep roof again.

You must once again do some climbing, aside from grabbing onto yellow ledges you'll also have to jump towards protruding bars and bouncing off them. 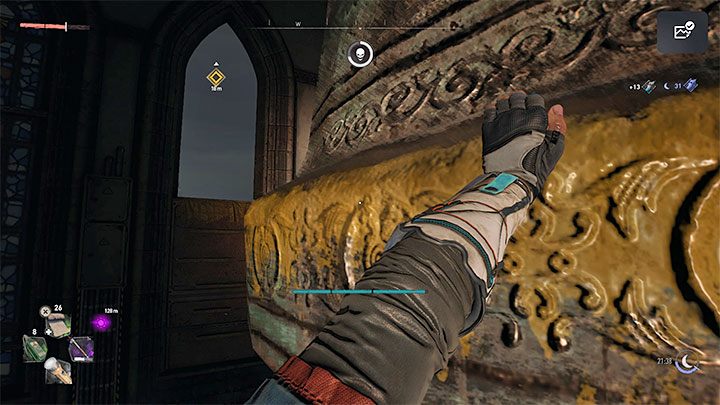 After entering the cathedral you can lower a ladder - it'll come in handy in case you fall down to a lower level, as then you won't have to repeat the entire climb.

You must jump towards the large bell pictured above and grab onto it. Move left and jump from the bell onto a new yellow ledge. 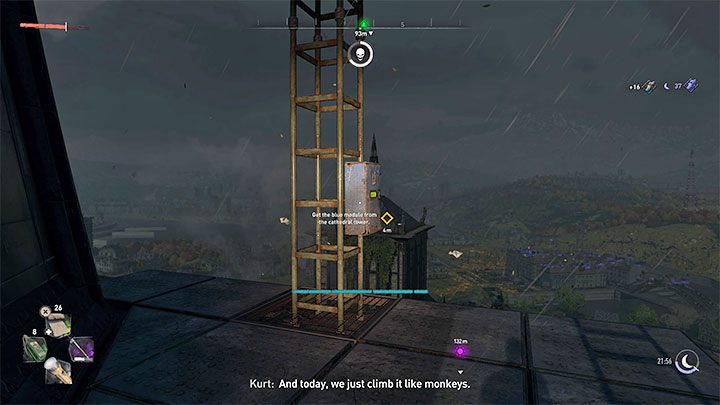 As you keep climbing you'll have to jump towards protruding gargoyles and grab onto some more bars. There's an interactive box on the roof - open it to get the blue module.

Bring the module to Kurt 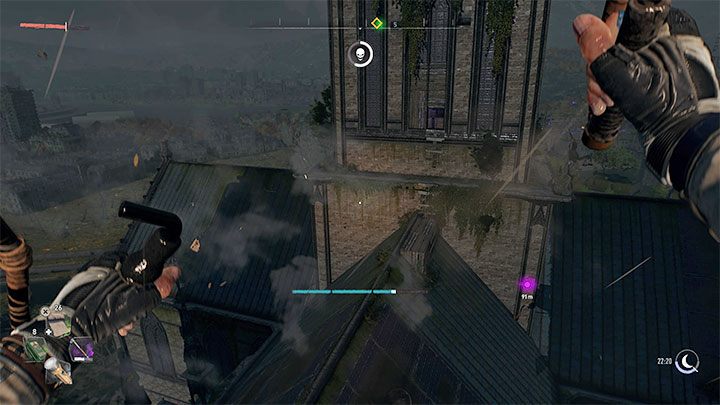 You must now bring the module to Kurt, but you don't need to return using the same route. Use your paraglider to reach Kurt's hideout. Make sure you land in a good spot so you don't slide off the steep roof.

You can tell Kurt you want to befriend him or refuse. His hideout will become a new safe zone. Leave Kurt's hideout and go to the PK Floating Fortress to meet Juan. There aren't any choices during this conversations - you'll finish the quest and unlock the Broadcast mission.