On this page of the Dying Light 2 guide, you can find a walkthrough for A Place to Call Home story quest. Thanks to our walkthrough, you'll learn how to unlock the paraglider and fast travel, how to solve the puzzle involving activating the electric substation, and how to defend Fish Eye and destroy Renegades' cannons. 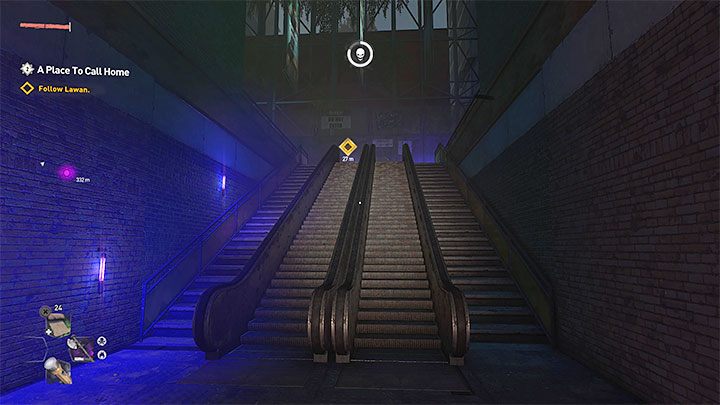 You will start this mission in the subway tunnels where the previous mission ended, but you've lost the tail - Waltz won't intrude on you for now.

Move forward to unlock a new metro station - Downtown Court. You can use it as a fast travel point - the game will inform you of that possibility. There is a chest with inhibitors at the station. Follow the stairs up and talk to Lawan. 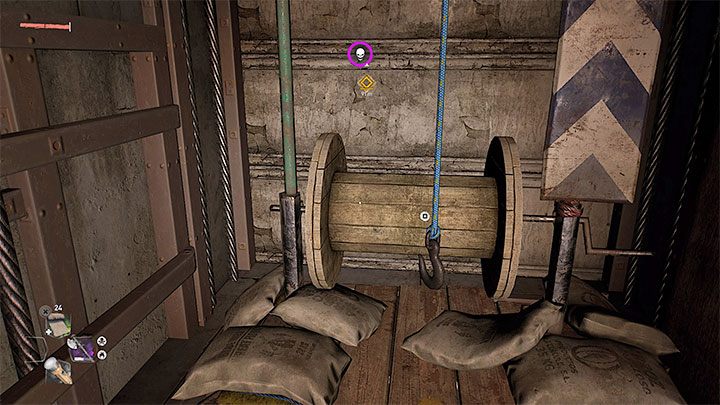 Make use of the lift i.e. a rope with a hook - such objects allow you to access roofs or higher ledges much easier. Once you reach the roof, a new cut-scene will start. 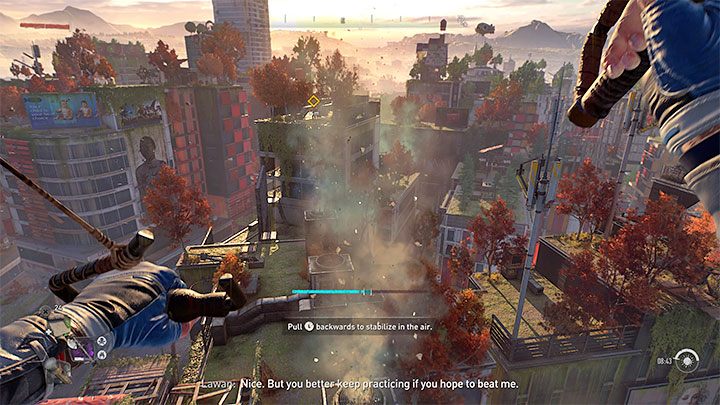 Lawan will give you a paraglider - it is a very important item that allows you to glide and traverse the map more easily. Unfortunately, your paraglider is currently at level 1 - you won't cover much distance with it, but you'll have an opportunity to upgrade it further into the game.

You need to follow Lawan and land on the roofs that she is landing. The game will remind you of paraglider controls (remember that gliding spends stamina points) and introduce you to large fans that can increase your altitude and renew spent stamina. 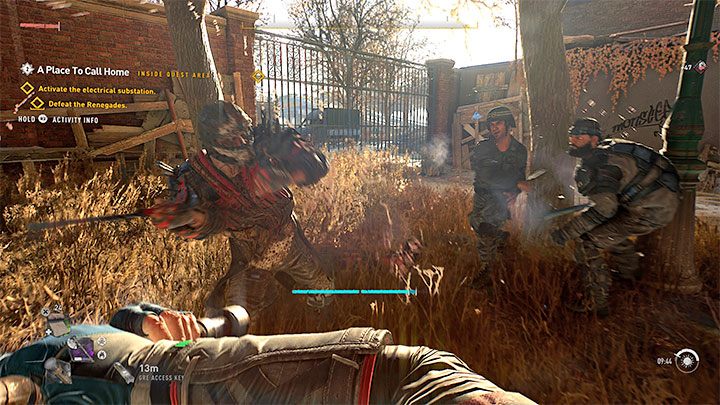 Your new mission objective is to activate the Downtown Electrical Station. You can proceed on foot or glide.

After reaching the destination, you'll encounter Peacekeepers, an event that will start another fight against Renegades. During the battle, watch out for friendly fire. It may a good idea to attack those renegades that are busy fighting. 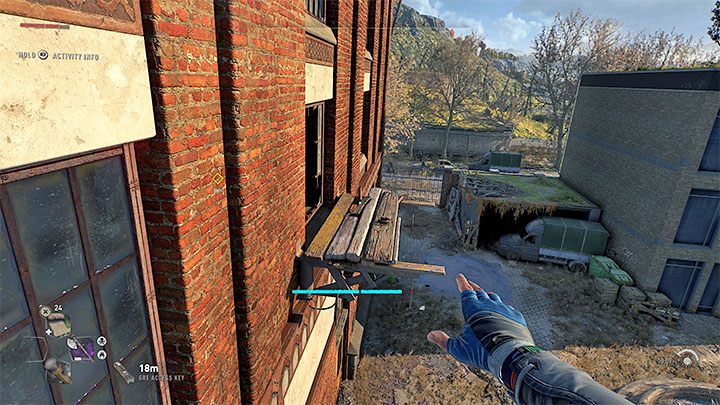 After the battle, talk to Peacekeepers again (dialogue options don't hold any importance). You have to complete a simple climb to reach the hole in the wall of the building (picture above) - climbing involves, among other things, use of yellow pipes. Thanks to this, you will enter the substation area.

A bigger puzzle awaits you here, the idea is to restore the power supply by correctly connecting 3 different cables. Spend some time to get around the area. The substation has several floors and you can move between them by using stairs, ladders, ropes, and climbing. 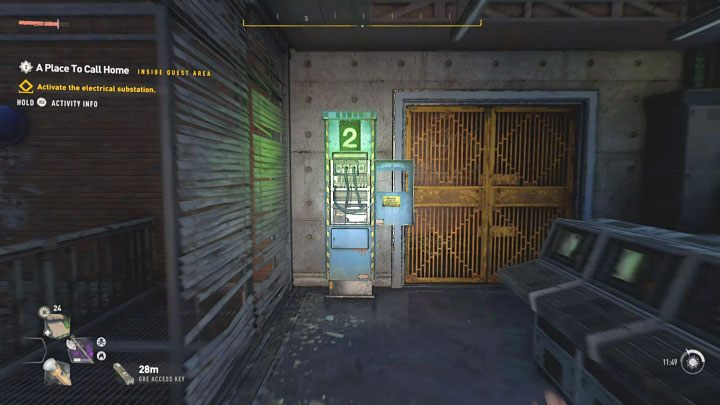 You can connect the cables in any order. Green Box 2 can be found on one of the middle floors.

After taking each cable, pay attention to its number and remaining length. Running out of the cable will prevent you from dragging it any further - you will have to release the cable, return to the box and start dragging it again. The key is to make the path of the cable as short as possible. 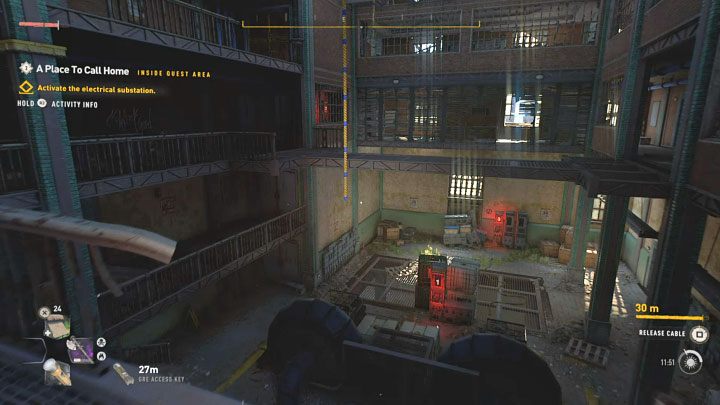 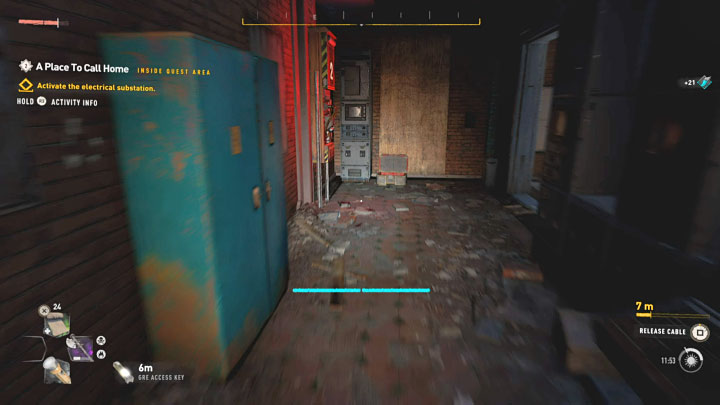 While carrying cable 2, move to the nearby balcony. You have to swing on the rope shown in picture 1 and jump towards the balcony visible in the distance.

A bit further you will find a red box 2 from picture 2. You have to plug the carried cable into its socket. 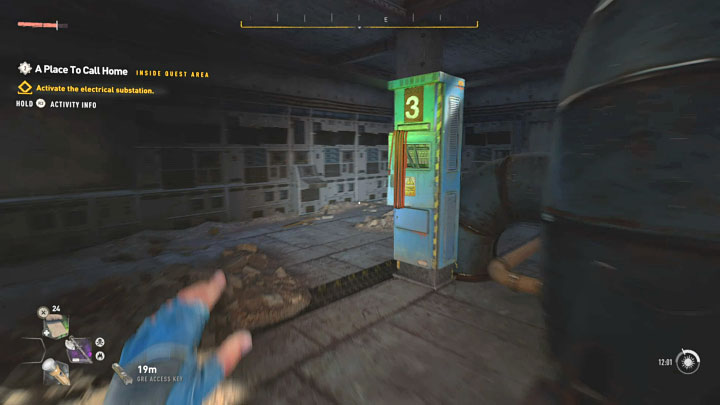 Now go to the lowest floor of the substation - first jump down to the lower level and then jump into an inactive elevator shaft on the side. The green box 3 is in the "basement" - pick up the cable and start dragging. 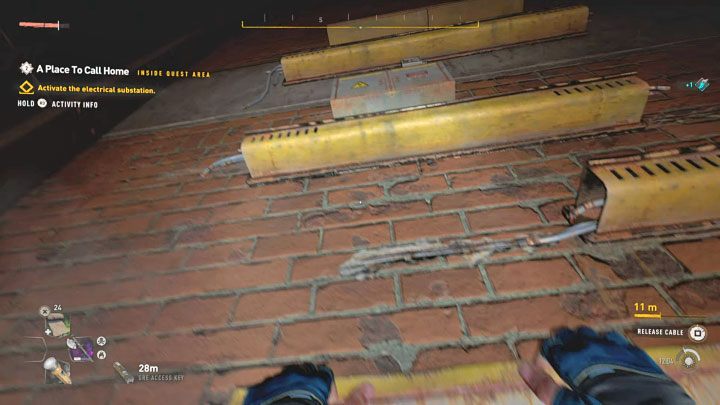 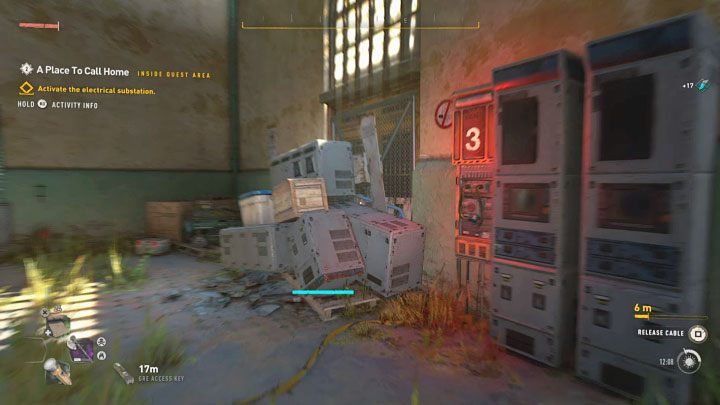 While carrying the cable, you have to return to the elevator shaft . In the elevator, start climbing the yellow elements from picture 1.

After you climb up, turn back and jump towards the open elevator door. The red box 3 (picture 2) is on the same level - find and insert the cable into it. 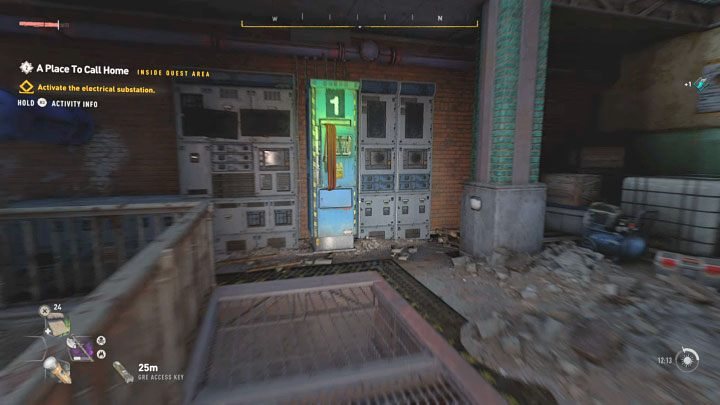 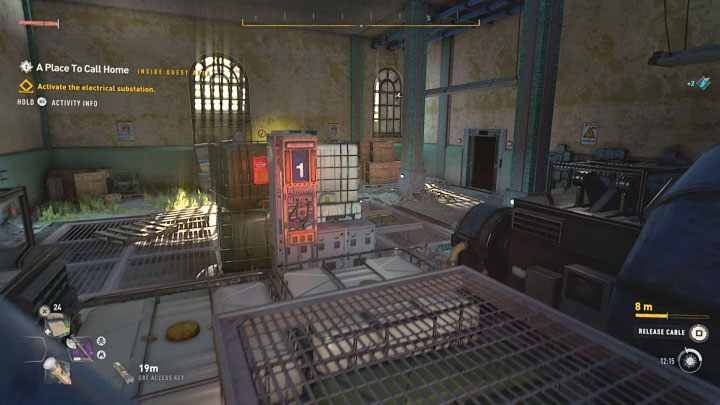 Don't leave this floor of the substation yet, as here you'll find:

This is the simplest part of the puzzle - carry the cable in a straight line as you climb up the fence on your way. 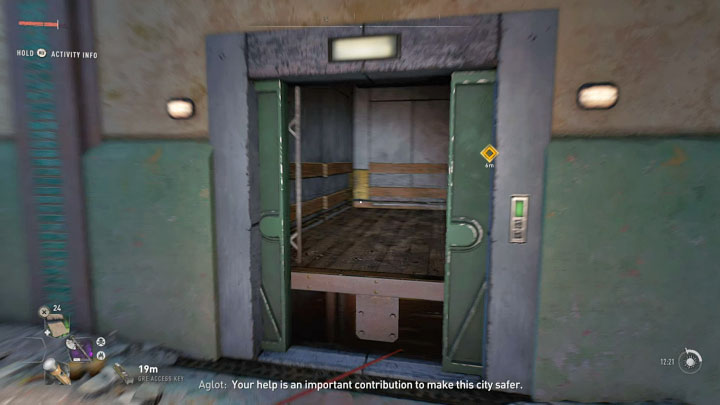 Succesfully plugging the cables to red boxes 1, 2 and 3 will activate the elevator . Enter the elevator and press the button to travel tothe control room . 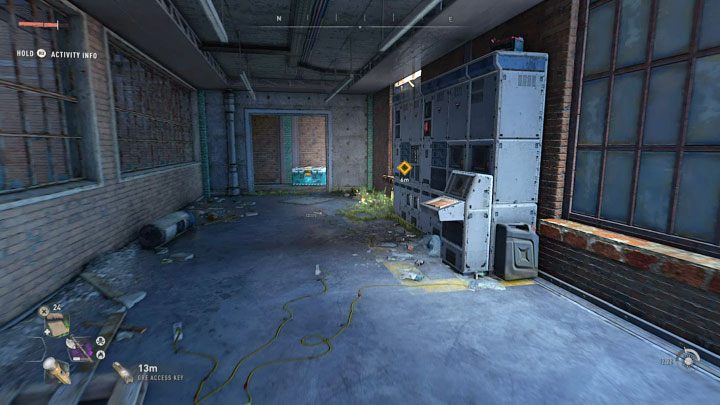 There is a substation activation panel in the control room, but the game recommends that you search and loot the area first. Among others, you'll find a chest with inhibitors and locked chests containing valuable loot.

You can give control of the power plant to any of the factions - either Peacekeepers or Survivors. It will not affect the course of this quest.

Meet Lawan at the Fish Eye 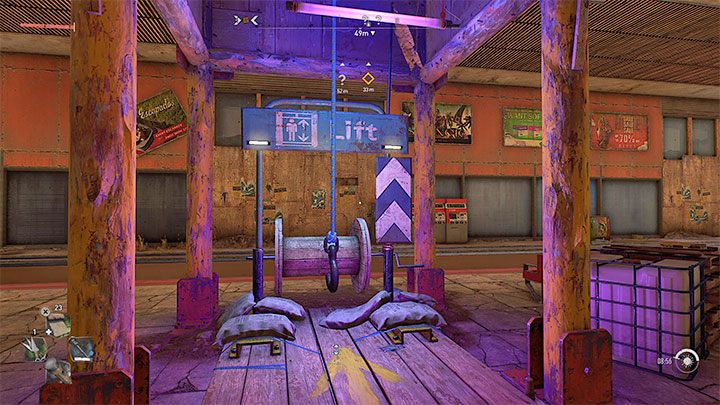 Fish Eye is the name of one of the safehouses inhabited by a large group of NPCs, found in the New Dawn Park district. You can access Fish Eye either with a paraglider or simply by using an elevator.

The mission objective marker will lead you to the bar in the Fish Eye. Talk to the bartender - this will make Lawan and Danior appear. 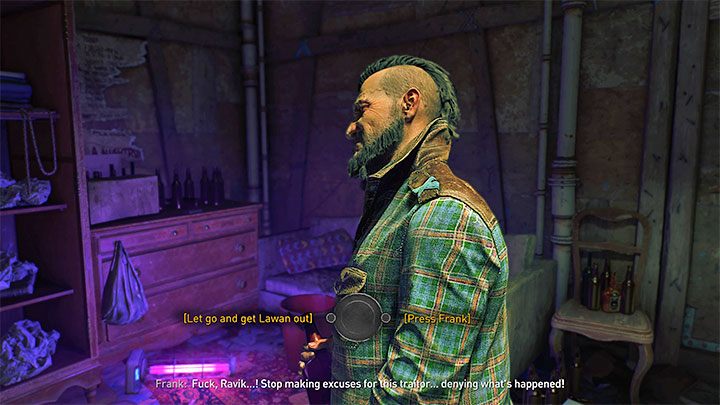 After the first meeting, you have to approach Lawan again. This time you will meet Frank for the first time. During this meeting, you can optionally mention the GRE key (the right dialogue option) so that two yellow dialogue options will appear (the picture above). A small choice awaits you - you can let go of the topic or force Frank to answer. 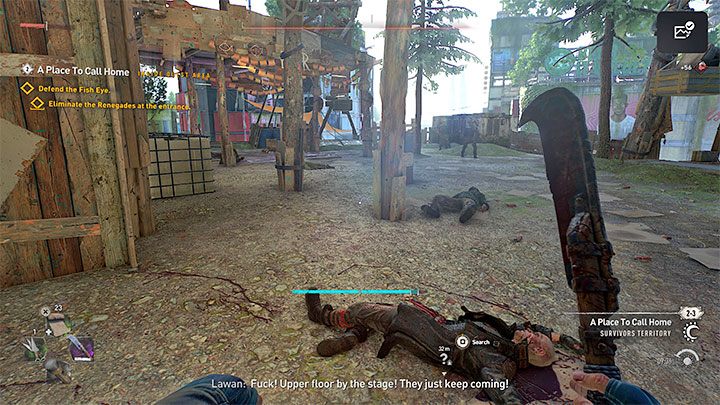 Regardless of the dialogue options you choose, the renegades will attack Fish Eye and you will have to join the fight.

In the beginning, attack any chosen renegade and don't get surrounded. Take your time - you won't fail the mission that easily. 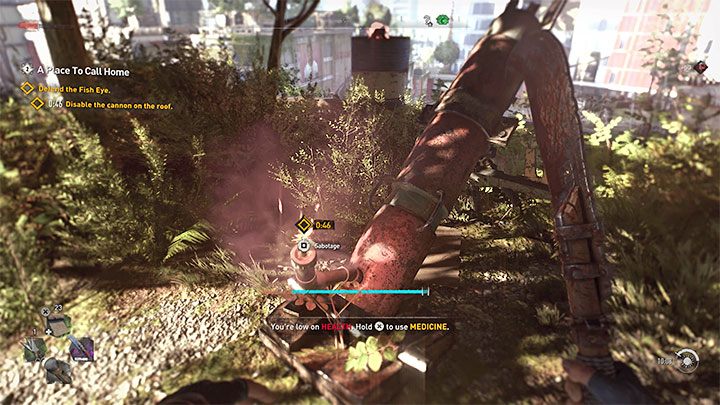 Things will get complicated, as you're asked to destroy the roof cannon. There is a time limit on this - 2 minutes . Quickly proceed to the area shown by the quest marker. You can get there, e.g. by following roofs and crossing through a hanging, moving object.

Quickly get rid of the renegades gathered around the cannon (you can also use e.g. Molotov cocktails or throw them from the roof). Don't touch the cannon until all enemies are disposed off. You have to interact with the cannon for 2-3 seconds in order to sabotage it. 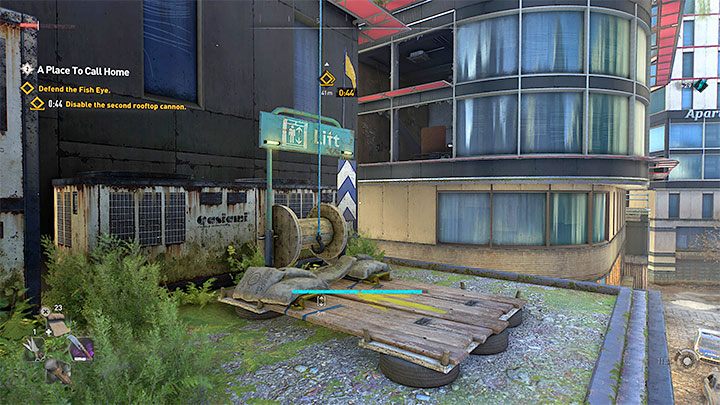 Return to the lower area in front of the Fish Eye to join further combat. You'll soon receive an information about the second cannon that has to be sabotaged. The best way to get to the roof with the cannon is by the elevator located next to the building's wall (the picture above). Repeat the same pattern - get rid of opponents and sabotage the cannon.

Hurry, as, after some time, you'll receive an objective to sabotage the third gun. Glide or run across roofs to reach the objective. Kill the renegades and sabotage the cannon. 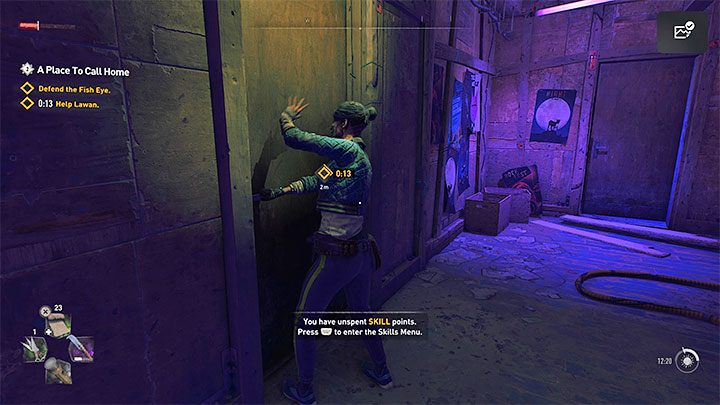 At the very end of the battle, you'll need to help Lawan. You only have 40 seconds to do this, but simply glide back to Fish Eye. Reach the indicated door and press the interaction button. 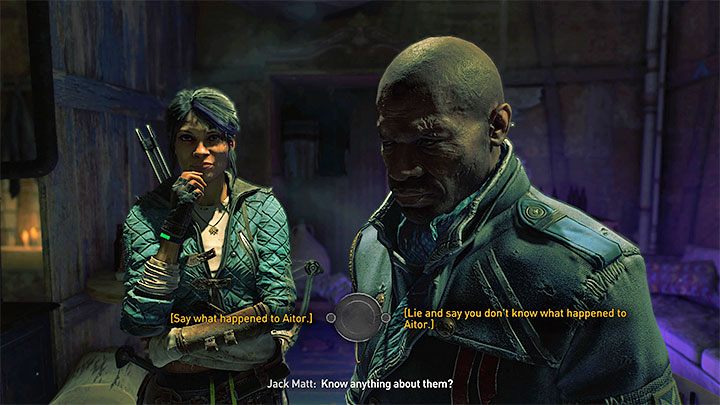 After the conversation, you will automatically move to the next main quest - Orders.