On this page of the Dying Light 2 guide you can learn more about Denuvo DRM protection. Here, you'll learn more about this anti-tampering software, its influence on the game's performance and taken disk space. 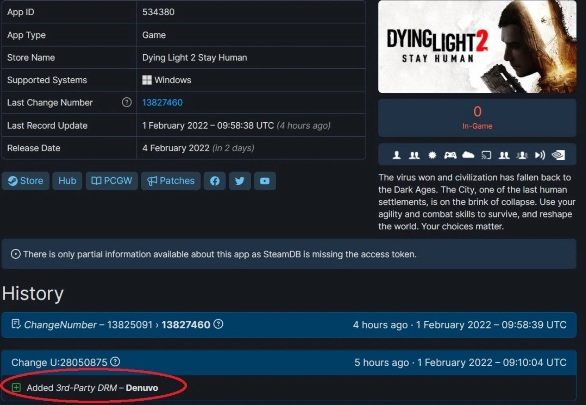 Three days before the game's premiere, information appeared on the Steam platform confirming that Dying Light 2 is protected by Denuvo DRM technology. Denuvo is an anti-piracy software that protects the game / program from illegal distribution. This is to increase the amount of legal copies bought and make creating cracks for the game impossible.

Many players, however, complain about Denuvo. Sometimes, on some computers, the software can make starting the game impossible, lowers framerates, and takes additional disk space. It is worth noting, however, that according to the information, Dying Light 2 is to include the newest version of the anti-tampering software, which takes only 500MB of disk space, lowers its impact on the gameplay and the size of the downloaded game.