On this page of the Dying Light 2 guide, you will find basic information about the 3 main factions in the game world. In addition, we've described the mechanics of city alignment - you will find out, among others, how to unlock the district alignments, the assumptions of this mechanic, and profits resulting from assigning new districts to Survivors or Peacekeepers. 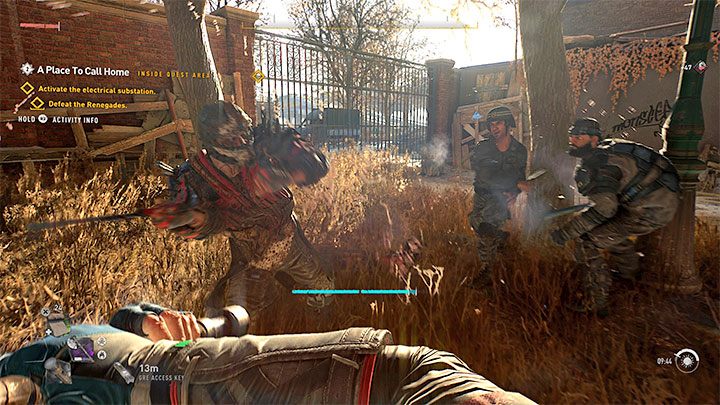 You can establish relationships with Peacekeepers and Survivors and help these factions by handling activities in such a way to meet the expectations of their representatives. Many situations of this type are related to important choices - for example, by helping faction A, you can do something that upsets faction B. However, there is no risk that you will become enemies of the Peacekeepers or Survivors for good and that you will no longer be able to maintain a positive or neutral relationship with them.

While traversing the game world, you can witness fights between members of different factions - specifically Renegades fighting the Peacekeepers or Survivors. You can join these fights or just ignore them.

The two main factions - the Peacekeepers and Survivors - have several main Hubs on the world map. They are safe zones in which you can walk around without the risk of being attacked. These are also places where you can take new quests or trade. You can also hand over districts to factions, and we have described it in more detail in the section on city alignment. 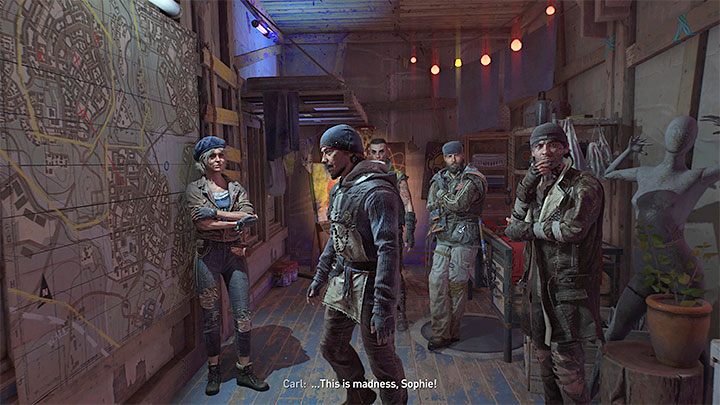 The Survivors is a faction that is largely made up of civilians. They have a libertarian worldview and want to function in a post-apocalyptic world in peace, without military aspirations similar to Peacekeepers. The main Hub of the Survivors in the game is Bazaar, located in the old town. You visit this place in the first hours of the game. 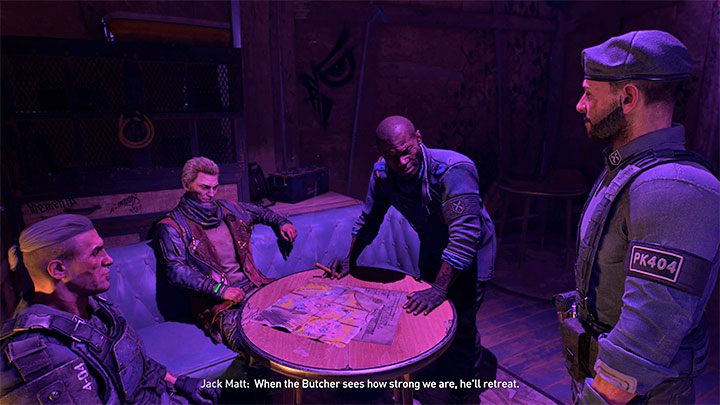 The Peacekeepers is a military faction that has set the goal of bringing order to Villedor and restoring law. Their actions are contrary to the libertarian slogans of the Survivors. The main Hub of the Peacekeepers in the game is the FPK Floating Fortress - a large ship moored in the port in the central part of the city. You will get there later in the game. 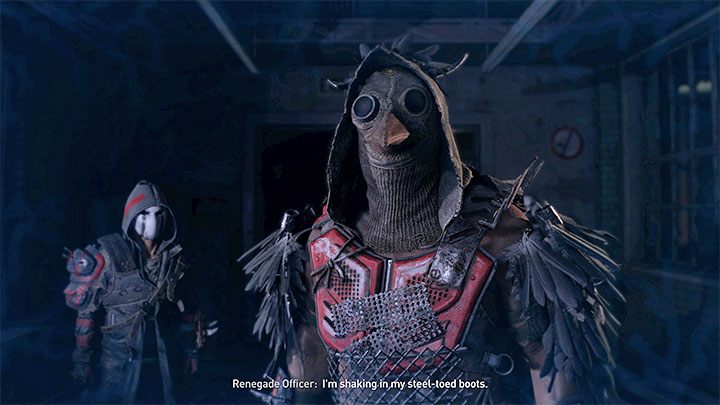 The Renegade faction is basically bandits who have hostile intentions towards both the other two factions and the main character. Their intentions and those of their leader - the Colonel - are gradually revealed as you advance in the main storyline. In general, when you see Renegades, expect a fight.

The mechanics of city alignment 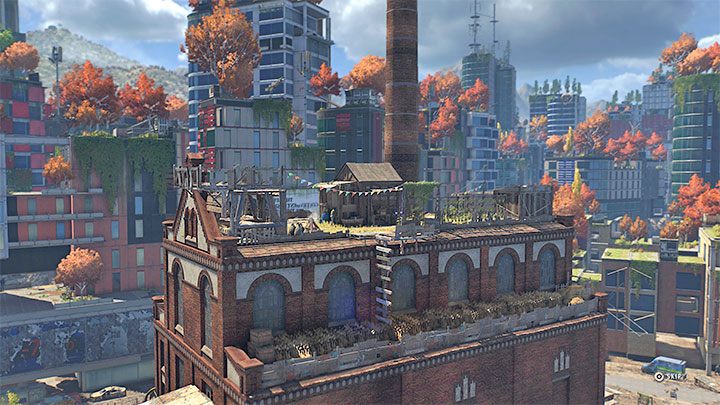 The Peacekeepers and Survivors factions are related to the city's alignment mechanics, and you'll learn about it thoroughly while completing the Water Tower story mission. Here are the main rules:

There are water towers and power plants in the city that you can find and take over. In each of these, you have to perform specific actions to make them work again first.

After taking over a given facility, a window with a choice will appear - you can hand over the facility to the Peacekeepers or Survivors. 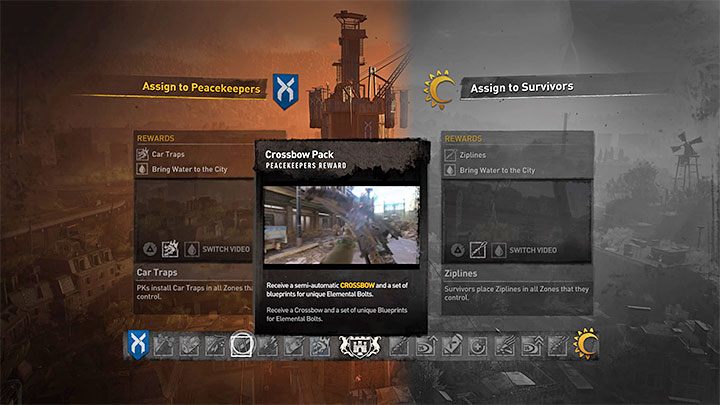 Each faction can reward Aiden for handing over the facility . These rewards are apparent from the very beginning of the game, and you can choose which of them you prefer.

Other rewards for handing over places to Peacekeepers are, above all, various types of traps that may appear in their districts. These can be, for example, electric traps, UV traps or a bolt cannon.

In addition, one of the most worthwhile rewards is a crossbow, which is a good ranged weapon and an alternative to the more common bows. 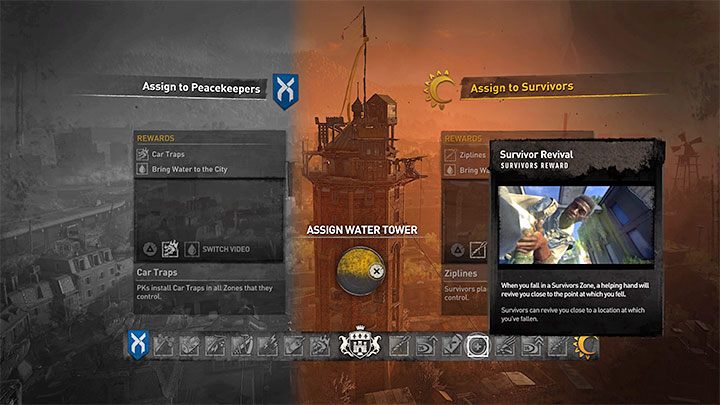 The subsequent rewards for handing over the facilities to the Survivors are, above all, various types of parkour objects that may appear in their districts. These can be, for example, airbags, ziplines, new fans helpful when using gliders, or landing bags.

Apart from that, one of the more interesting rewards is the option of being resurrected by a Survivor - when Aiden dies in the Survivors' district, he can be brought back to life by one of the group's members (a special option on the death screen).

The Peacekeepers' and Survivors' rewards mentioned above are unlocked one by one. You can align facilities to only one faction to get all its rewards or, for example, distribute them equally to get various rewards from each group. In the latter case, however, you won't get the best ones. 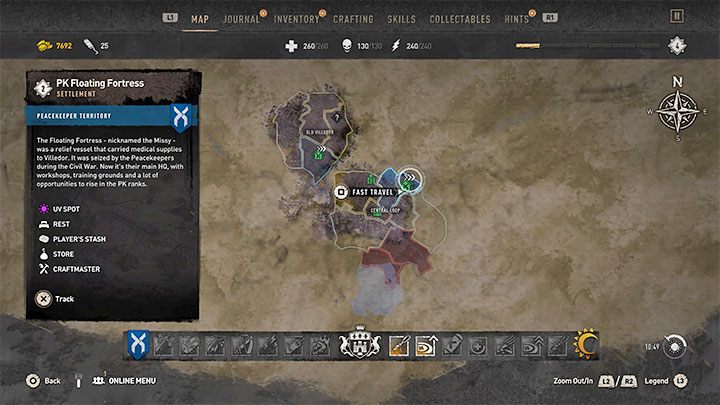 When you hand over a facility to a faction in the district, you can find its unique objects (traps or parkour), and safe zones will also appear.

You can check the state of taking over districts in the world map - zoom out as much as possible. It is worth noting that some districts are under the control of Survivors or Peacekeepers from the start, and it will never change.

The significant information is that the mechanics of city alignment is not related to the main storyline. You can, for example, hand over districts to Survivors, and while completing the next main missions, make decisions according to the Peacekeepers' views. Alignment only affects Peacekeepers and/or Survivor rewards unlocked in their districts.