On this page of the Dying Light 2 guide, you can find a walkthrough of the Revolution main quest. You will learn, among other things, what the important choices related to Vincenzo and Hakon are about and how to get and install the bombs on the windmill (race against the clock for the last bomb).

The walkthrough for this task is currently in works. In the near future, we will supply walkthroughs for other variants of completing this quest.

Go to the water tower for the explosives 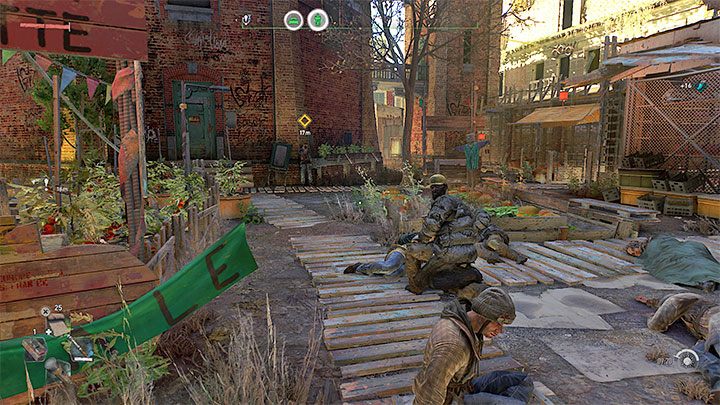 You will start this quest by meeting with Alberto in Bazaar. Vincenzo will also join the conversation. It doesn't lead to any essential choices.

Now you have to go to the water tower from the previous mission. At the base of the tower, talk to one of the Survivors to learn about the attack. 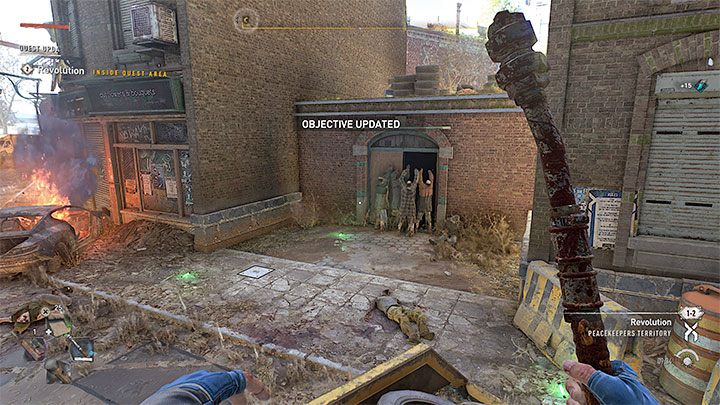 You have to travel to the area on the border of Quarry End. After reaching the destination, you will notice a group of zombies hitting the gate. Attack them any way you like (it might be a good idea to use a Molotov cocktail) and get rid of them all.

After the fight, go inside and talk to Wim.

Search the crates in the yard 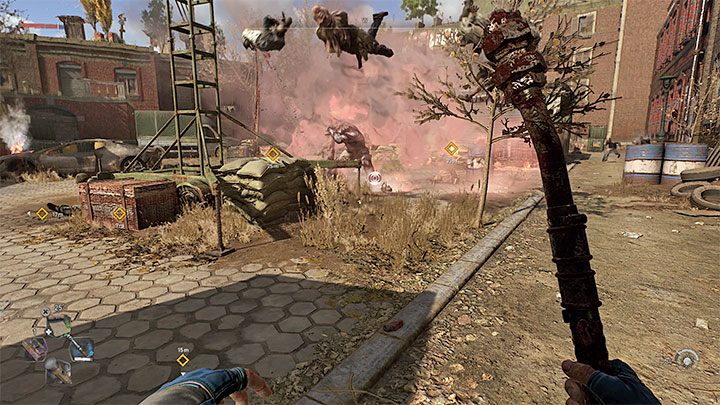 In the courtyard, you will meet a few Goliaths accompanied by "ordinary" infected. Theoretically, confronting them is not obligatory, although Goliaths and zombies may prevent you from completing the mission objective.

If you want to beat the Goliaths, use the tricks you learned earlier - throw red bottles at Goliaths and other monsters to cause an explosion, and use quick attacks on the Goliaths combined with jumping back before their strong attacks. Also, remember to attack only one Goliath at a time and run away, for example, onto small roofs if you need to heal yourself. 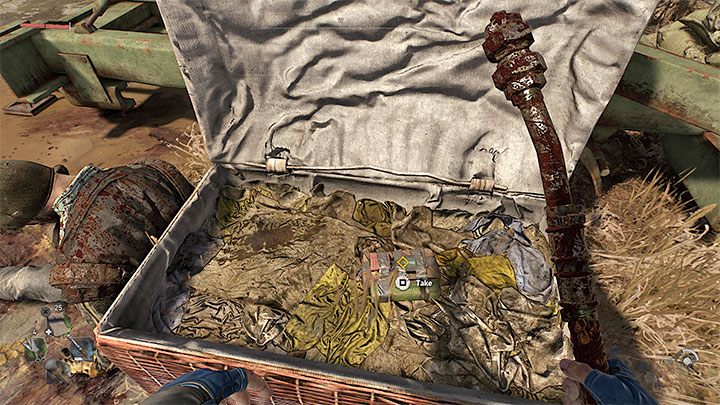 You have to search the marked chests in the courtyard. You will not find the explosives you are looking for in all of them, but you have to open them all to check their actual condition.

With the two explosives found, return to Alberto in Bazaar. 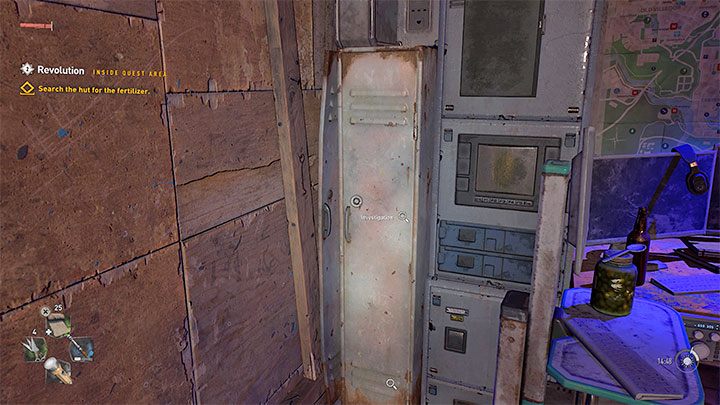 Go to Cillian, who you met earlier at the beginning of the game. It's a hut on the roof of the building, and it will be locked, so you have to use a lockpick.

Meet Alberto near the windmill 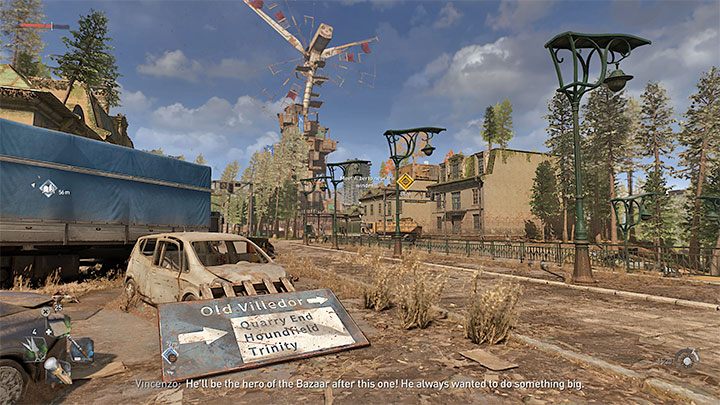 Now you have to go towards the large windmill related to the rest of the mission. Alberto is in Alberto's Hideout on the top floor, accessible from the roof of the building. Collect 3 explosives from him. Aditionally, you'll unlock this place as a new safe zone.

Plant the explosives in the marked locations 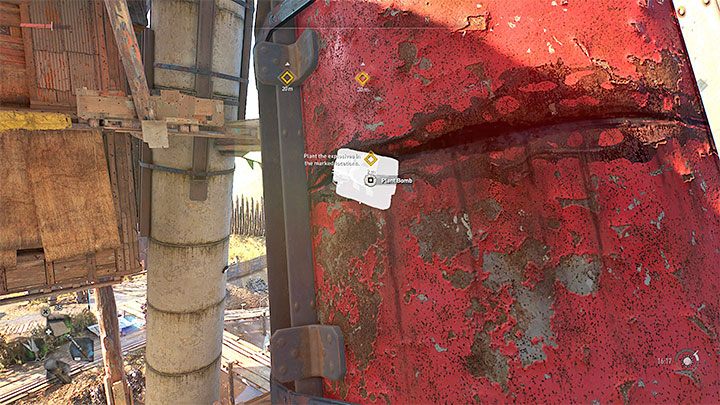 Go to the Old Villedor Master Mill, to which you have to swim through the hole in the barricade. As you explore the lower levels, expect to encounter single opponents that you can eliminate in fights or by stealth.

All bomb planting locations are marked on the screen. Getting to the two higher places takes a bit of a climb, but it's not very complicated.

Report back to Alberto 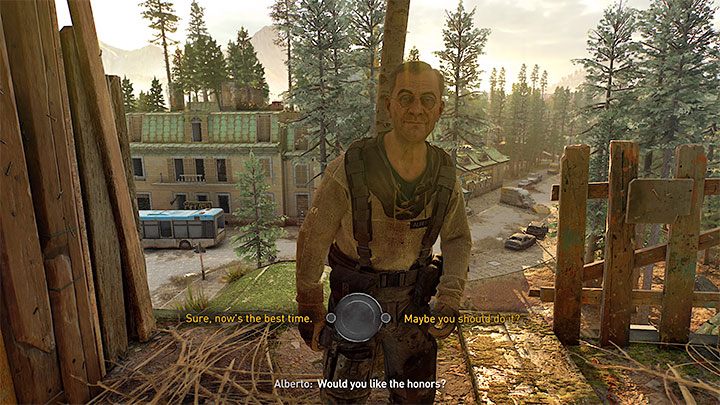 After placing all 3 charges, jump or carefully go down. Go back to the hideout where Alberto is. You can let Alberto set off the explosives or take the initiative and use the detonator yourself. Unfortunately, the plan to destroy the windmill will not go according to plan.

Talk to Alberto again - you can guess where to plant the bomb (it will be the disc on the top). A new challenging mission objective awaits you - you will have to deliver one more explosive.

Plant the explosives at the top of the wind turbine 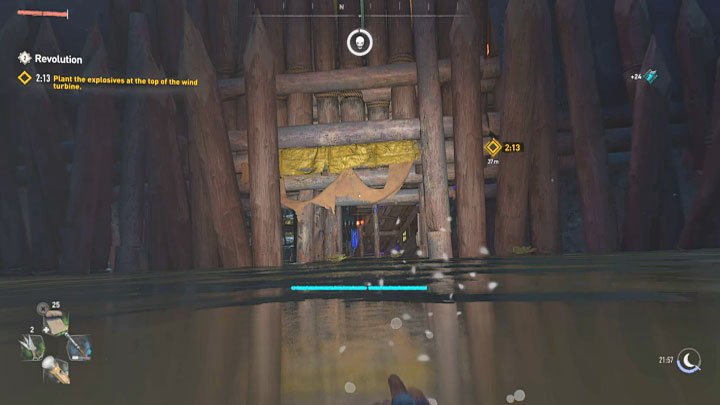 You only have 2 minutes and 26 seconds to get the bomb to the top of the windmill. It is a short time, but if you fall deadly or exceed the time limit, the game will restart the scene to the start of the time trial and allow you to repeat it.

Sprint towards the windmill and make far jumps. Jump into the water, but try to quickly swim to one of the ledges at the base of the windmill to resume the run and start climbing on time. 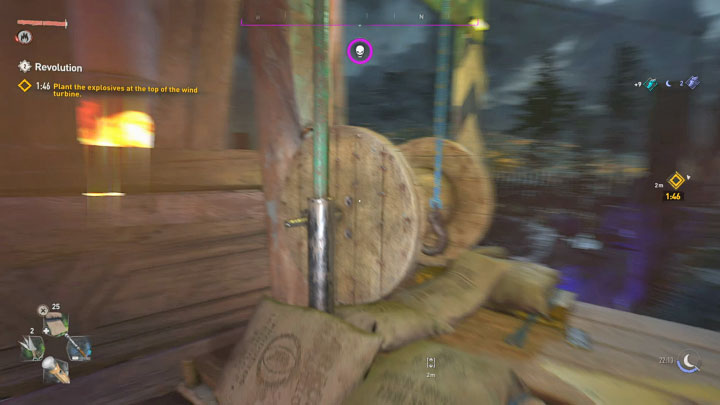 Run the next balconies to get to the place from which you can jump to the ledge with flames. Run between the fire and use the elevator with a rope, which will quickly take you to the higher level of the windmill. 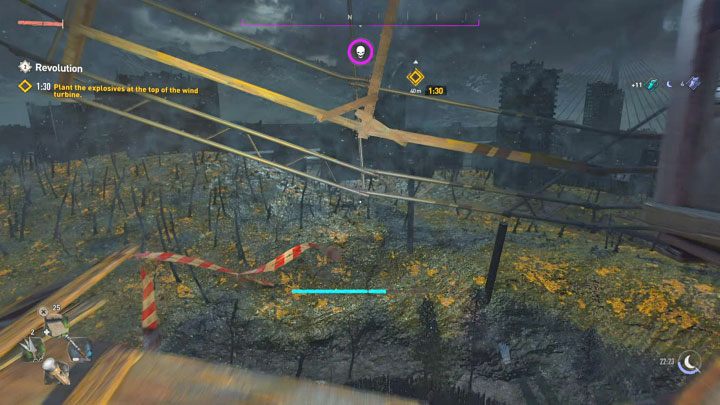 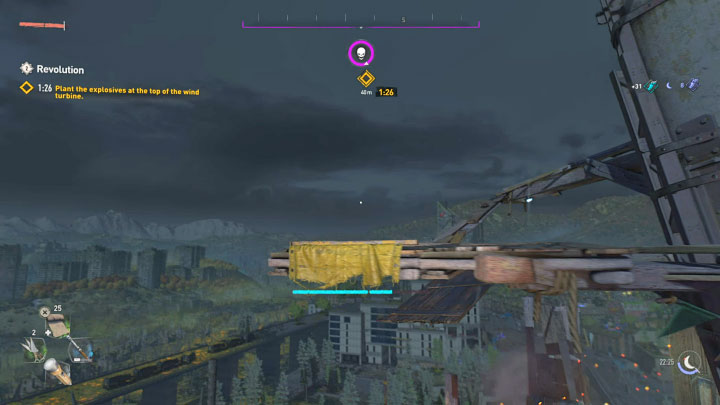 The rest of the climb involves two types of activities: 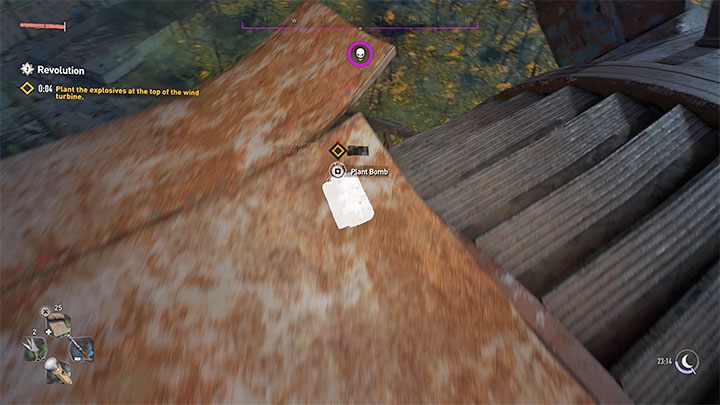 The final part of the climb involves running through the highest balconies to the ladder. Use it. This way, you will reach the top and locate the last place to plant the bomb shown in the picture. A cut-scene of escaping from the windmill and its destruction will start. 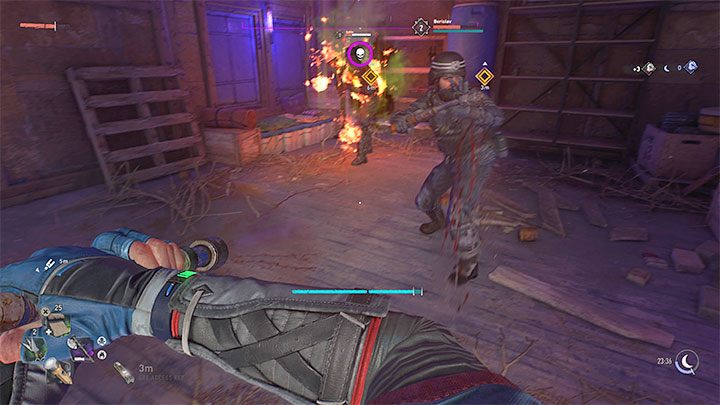 You have to go to the hideout for the last time. There, a group of enemies will appear. You have to fight them and, due to the small area of the fight, make sure that they do not corner you.

After the fight, talk to Alberto.

Important choice - keeping a promise or travel to the center 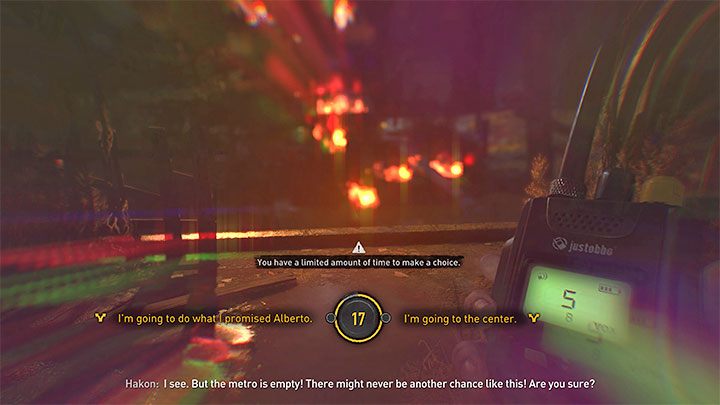 Soon after receiving the task to inform Vincenzo about his father's fate, a walkie-talkie conversation with Hakon will start, and you will have to make an important choice under time pressure. You can choose to fulfill Alberto's wish or focus on getting to the center.

Option 2 - Get to Hakon's hideout 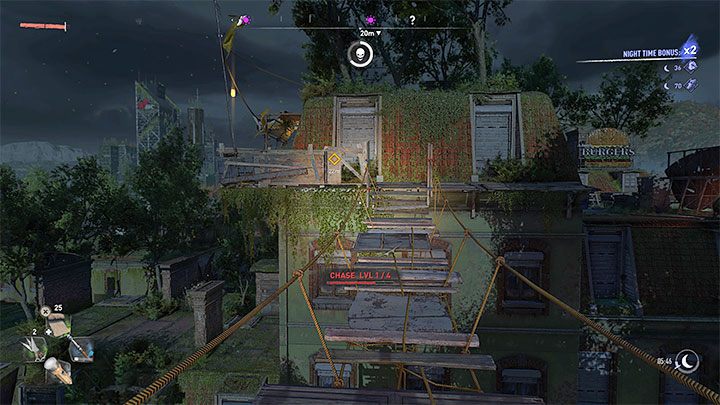 If you choose the right dialogue option, you will skip the visit to Bazaar, although you can also go there later if you want and find out what happened there.

Hakon's hideout is on the rooftop in Quarry End. 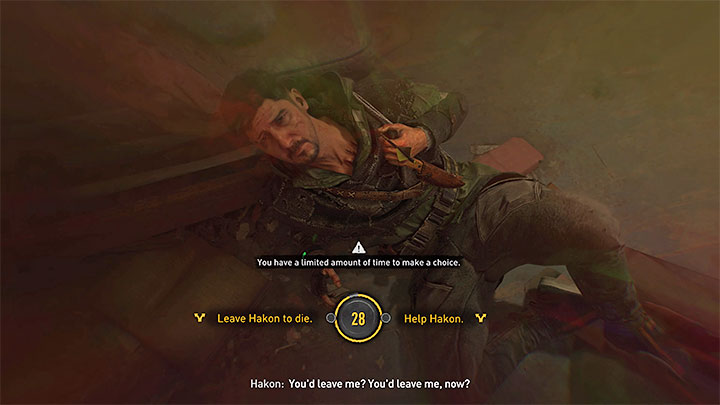 During the conversation with Hakon, he will be suddenly hit by an arrow. You will have to make another time choice - you can leave Hakon or try to help him.

Option 2 will additionally start the side quest Sniper's Alley, which is about locating and catching the sniper responsible for the attack on Hakon - we have described it in a separate chapter of the walkthrough.

Regardless of your decisions, you have to complete the new main quest, Let's Waltz!.