This page of the Dying Light 2 guide contains a walkthrough of the Water Tower main quest. You will find out, among others, about the important choice regarding Jack and Joe, how to disarm the explosives on the water tower and climb to its top, who should get the control over the tower, and how to search Barney's hideout.

Get to the Water Tower 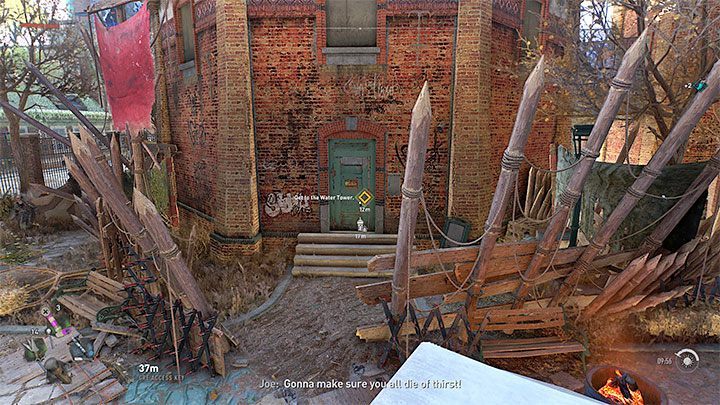 The Water Tower is a large building visible from a distance. After reaching it, deal with the monsters at the base of the tower. You need to do this to open the tower door - it requires you to use lockpicks and complete the mini-game (fortunately, it is a low level lock). 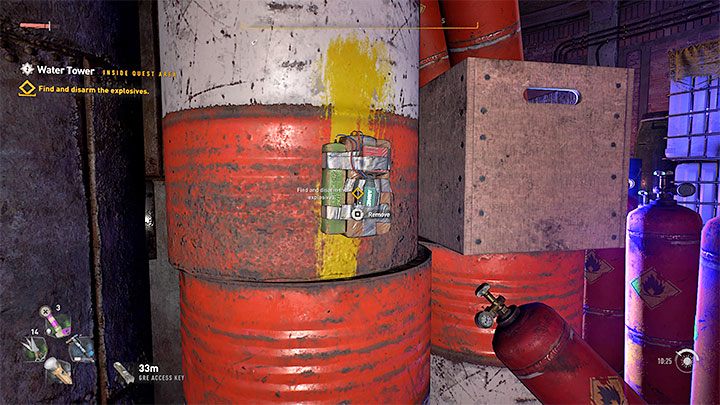 There are 3 explosives in the water tower area, but you don't have to rush to reach them - there is no time limit to disarm them. After reaching each of them, you have to detach it to save it for later. 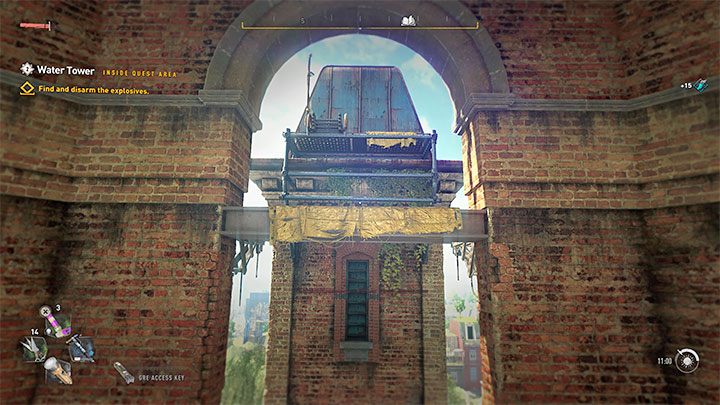 Reaching the next explosives requires climbing - look for yellow ledges and bars. We advise you not to rush - you don't want to fall from a great height.

Climb to the top of the Tower 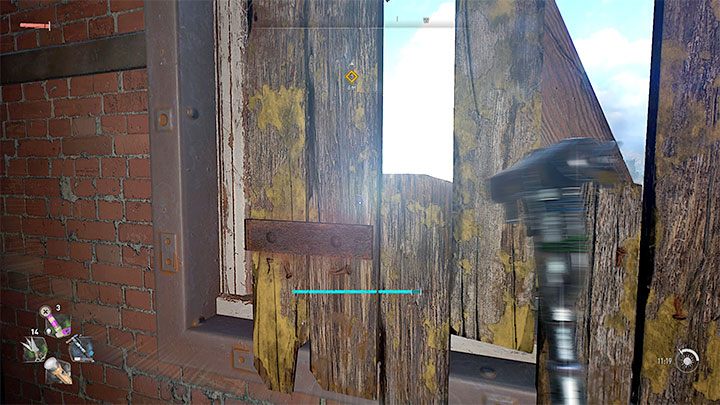 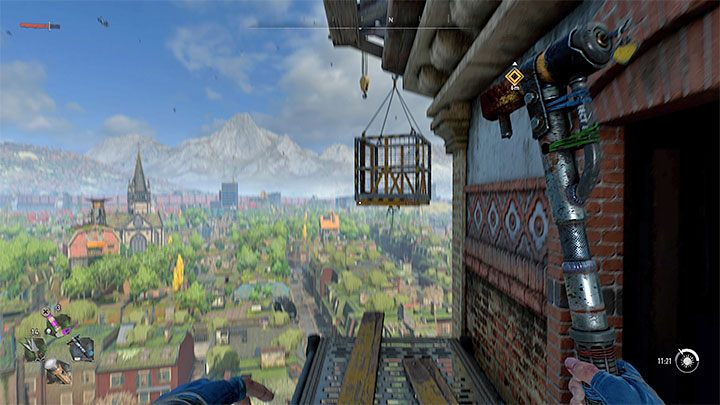 You must keep climbing. It's worth looking around along the way, because you can find an inhibitor crate.

Destroy the boards shown in picture 1 - this way, you will be able to get to the outer balconies. Here you have to perform a more difficult jump towards the hanging cage from picture 2. Make sure it is perfect, otherwise Aiden will fall from a great height and die. Finish your climb to the door at the top of the tower. 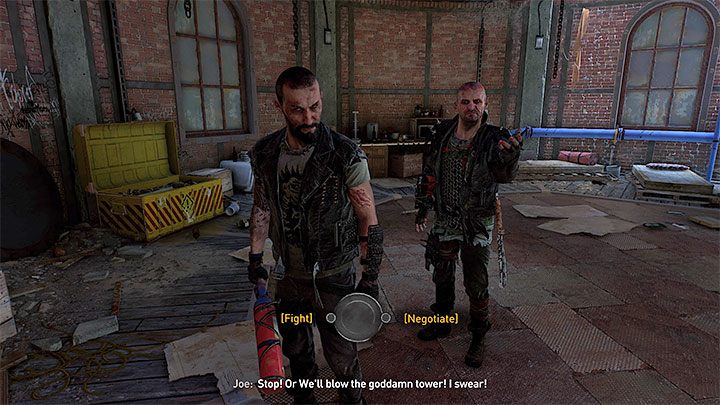 When you enter the tower room, a confrontation with Jack and Joe will start. You will have to make an important choice. You can choose between attacking the bandits or negotiating to resolve the problem peacefully. 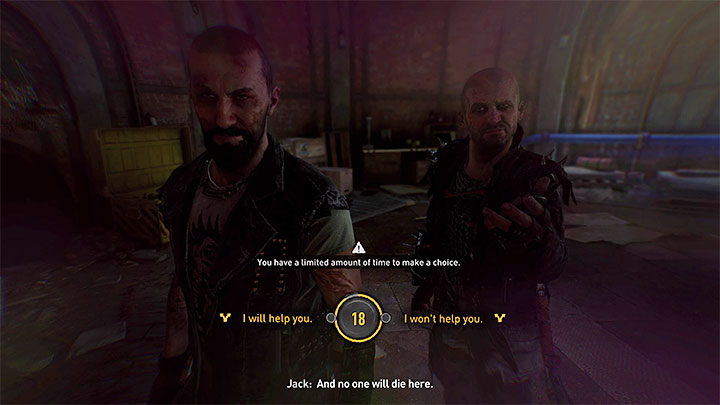 To select variant 1, you have to choose: 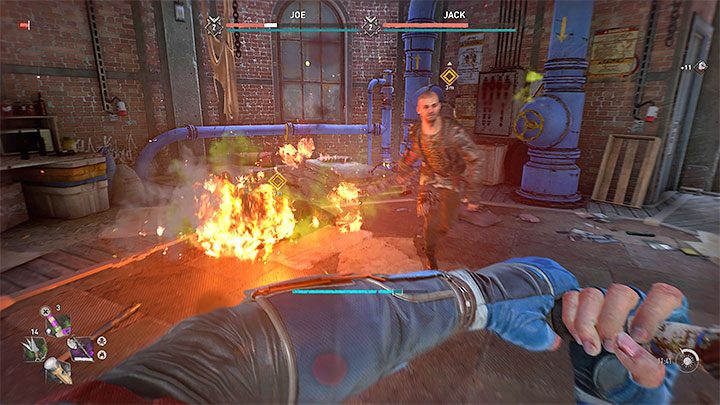 It is not very difficult to deal with the bosses, but you should know about a few things: 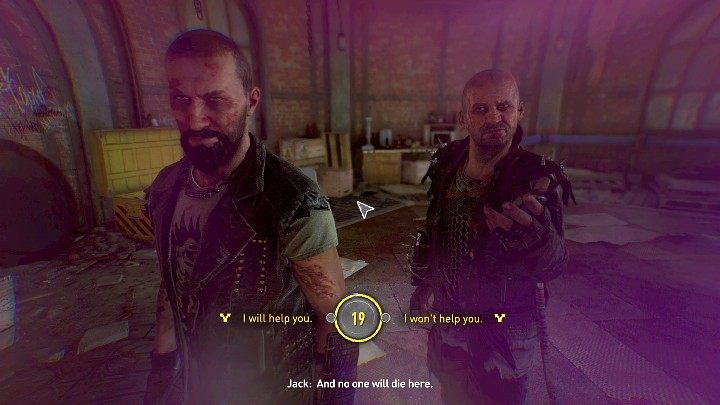 If you decide to negotiate, you'll find out that Jack and Joe want to escape the city and take refuge in the nearest settlement. You'll have to make another important choice: 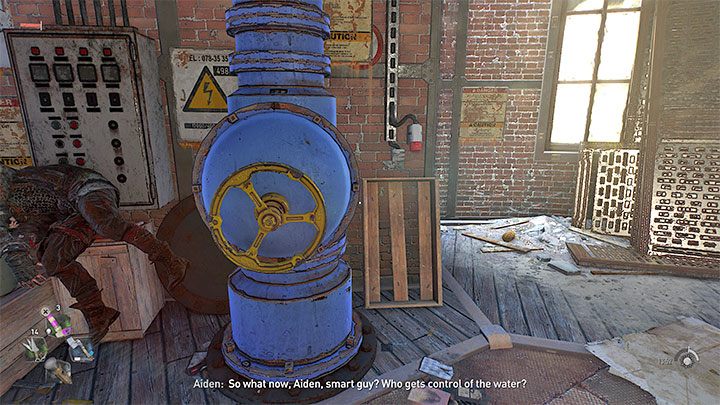 After the fight with Jack and Joe, you can start unlocking the water flow. Interact with a large yellow knob. 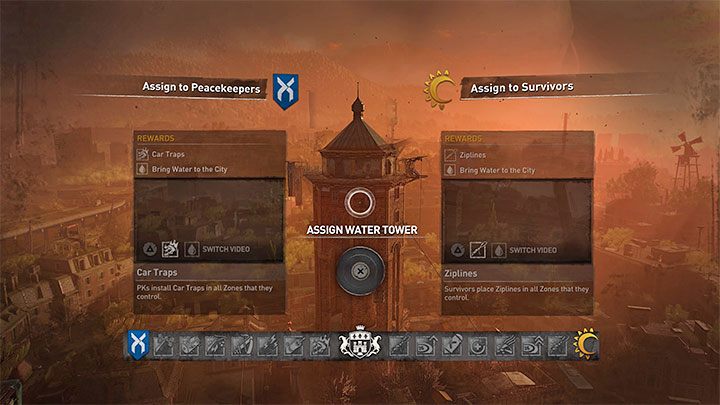 The game will show you an alignment tutorial. We have described its basics on a separate page - Factions and city alignment. Here are the most important information: 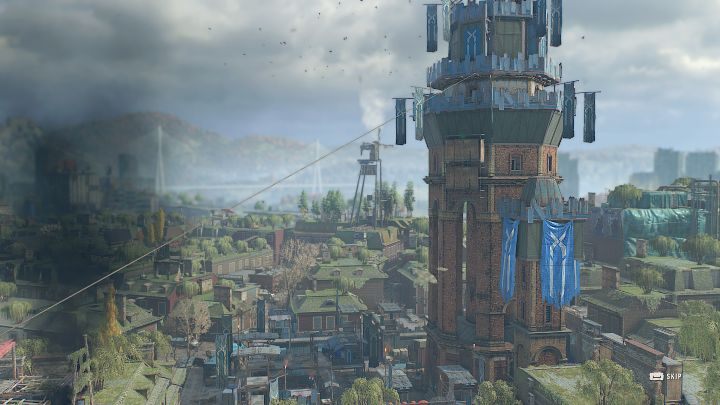 Choosing the faction that will take over the water tower will have an impact on the end of this quest - think carefully before making this decision.

Option 1 - Search Barney's hideout for evidence, the water tower is handed over to the Survivors 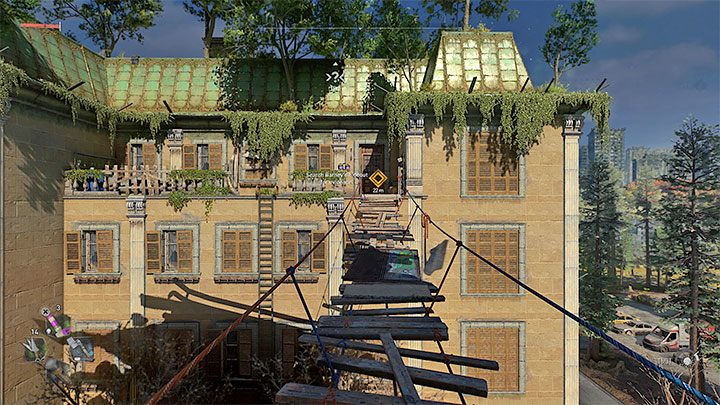 You have to go to Barney's location - to the motel from the previous mission. Use the drawbridge to get to the building through the upper door near the roof (picture above). 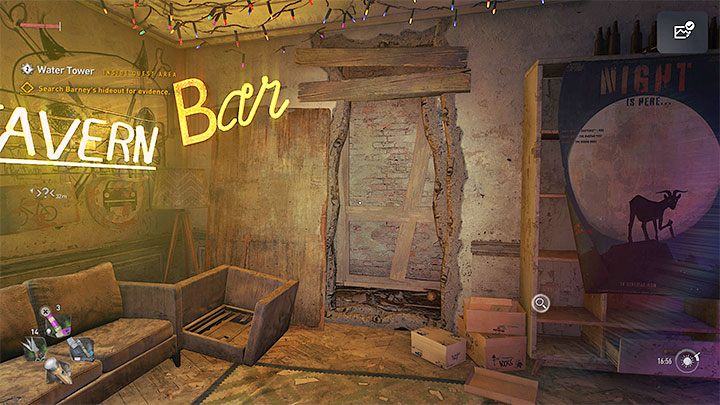 After entering the building, turn left and reach the metal gate. You can go into the room and start exploring it.

There are a few clues to find here but most of them are useless. Move the large wardrobe to reveal the hidden stash shown in the picture. There you will find a fragment of human skin - an important trace in the murder case. 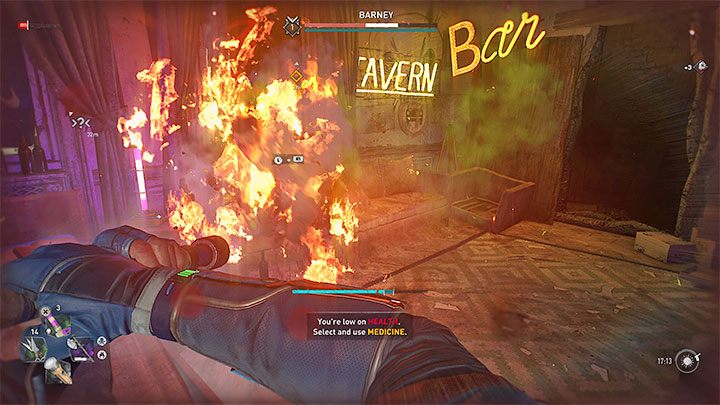 Barney will appear in the apartment and you will have to fight him. As usual, watch out for strong attacks by jumping out of their range.

This is quite an unusual fight, because it will not end with Barney's death. He must be injured enough to make Sophie intervene. The conversation with Sophie is linear.

Meet Sophie at the Bazaar 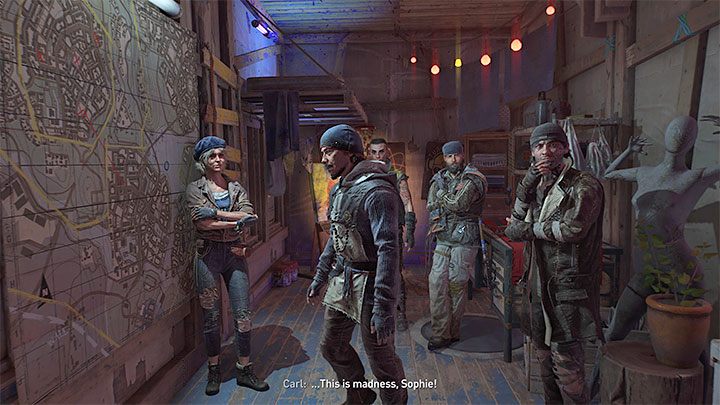 After the meeting is over, you will receive a message to wait for Sophie to contact you - explore the map a bit and wait for her to speak on the walkie-talkie.

Head out to the Bazaar. Reach the second floor where you will witness a conference and an argument with Carl. Another quest, Revolution, will start.

Option 2 - Search Barney's hideout for evidence, the water tower is handed over to the Peacekeepers 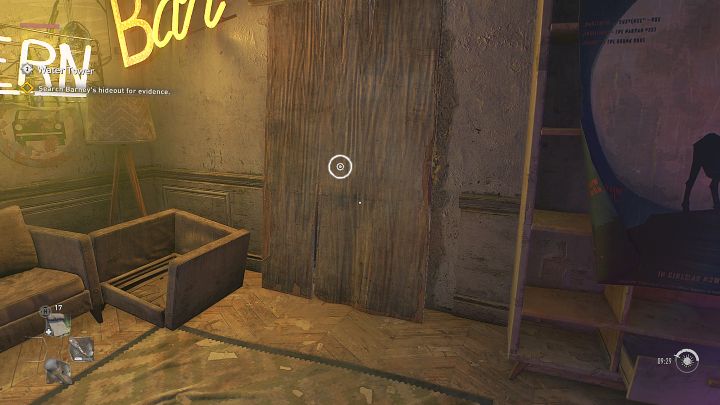 After entering the motel, go straight to the main room. If you want, you can examine a few traces, then move aside the wooden obstacle shown in the picture above and enter the recess. There you will find a piece of human skin that most likely belonged to the murdered Lucas. 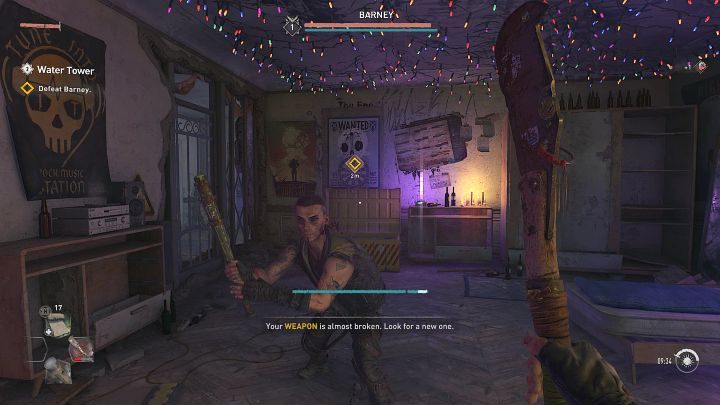 After a while, Barney will appear in the apartment and a fight will begin. The opponent is not too demanding, you just need to parry his attacks or dodge and counterattack. 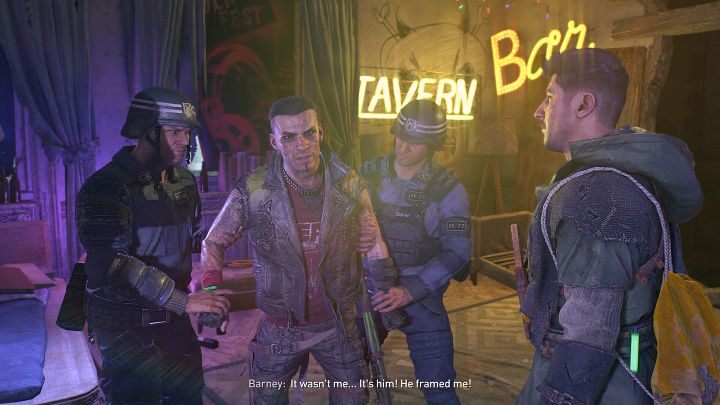 When the opponent's health drops to around 1/3, Aitor, Hakon and several Guardians will appear. Barney will be arrested and taken to the metro station. 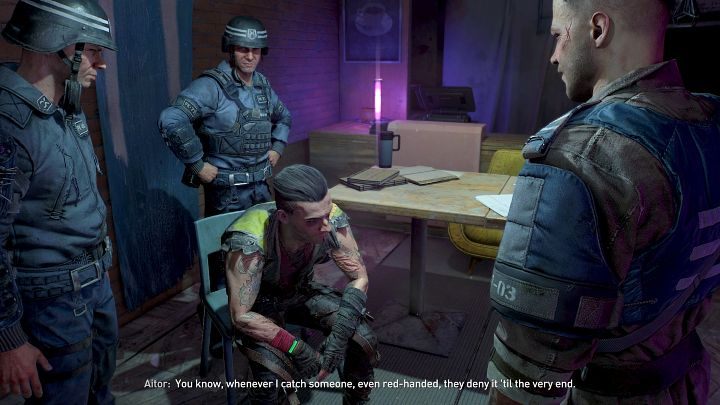 Upon entering Aitor's room, you will witness an interrogation scene where Barney refuses to plead guilty. After a short cut-scene, the mission will end and you will automatically move on to the next main quest - Into the Dark.