On this page of the Dying Light 2 guide, you can find a walkthrough for The Only Way Out story quest. Among others, we offer tips on what actions should be performed while at the Bazaar, how to reach the metro tunnels and safely cross through them, how to climb the roof of the GRE building, where to find Maya and what persons to question regarding Lucas's murder.

Spend time at the Bazaar while waiting to hear from Hakon 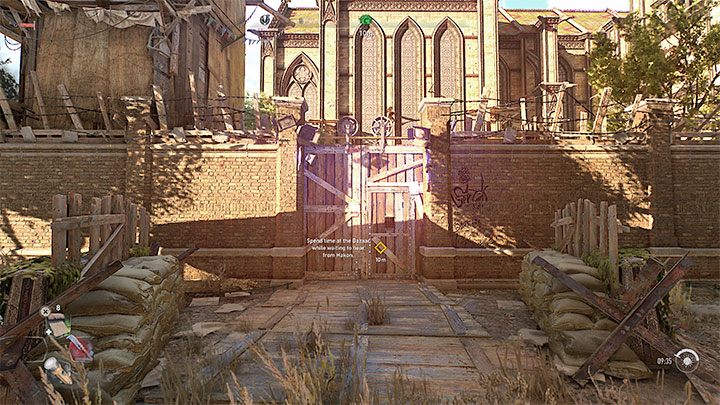 The Bazaar can be found in Trinity district - make your way to this location. It's a church building which is the main headquarters of the Survivors faction.

Use one of the entrances and then enter the church itself to find yourself in the Bazaar. 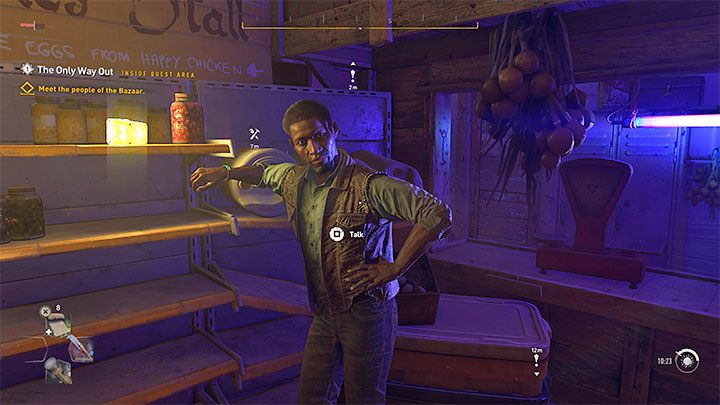 The described mission objective can be quite confusing, because the game does not display any markers what to do next. This is not a bug - you just have more freedom. Hakon may contact you:

Aside from starting side quests, you can: 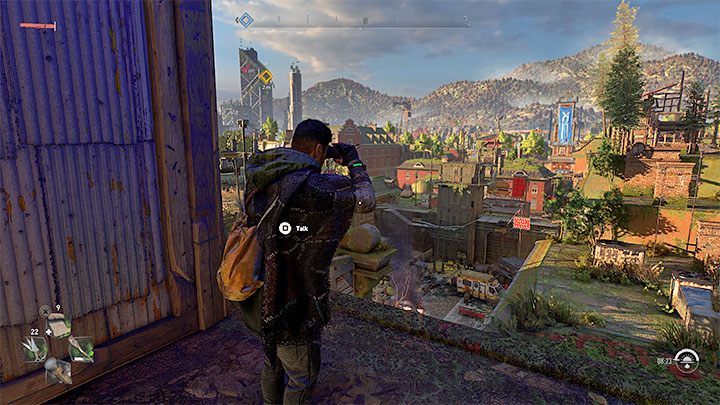 After you complete the two side quests, Hakon should contact you through the walkie-talkie and invite you to a meeting.

Reach the safe area south-east of the Bazaar and talk to Hakon. You will learn about what Peacekeepers are up to and Hakon's plan.

Get to the station through the metro tunnels 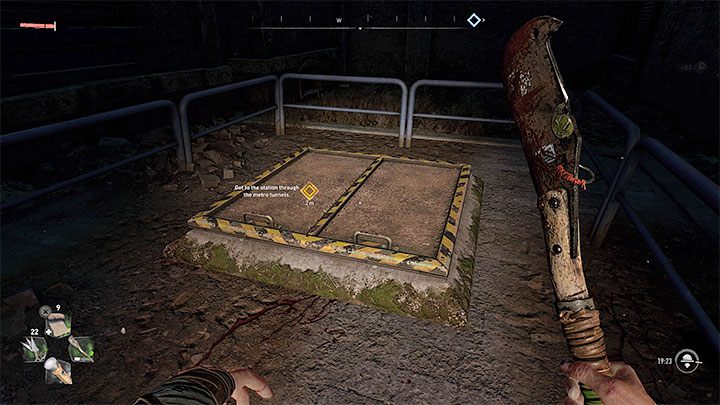 The mission takes place during nighttime - watch out for various dangers. Reach the hatch marked by the game. Start by dealing with nearby infected, as the hatch has to be lockpicked which requires a safe zone. If you're out of lockpicks, craft more of them (Scrap will be needed). 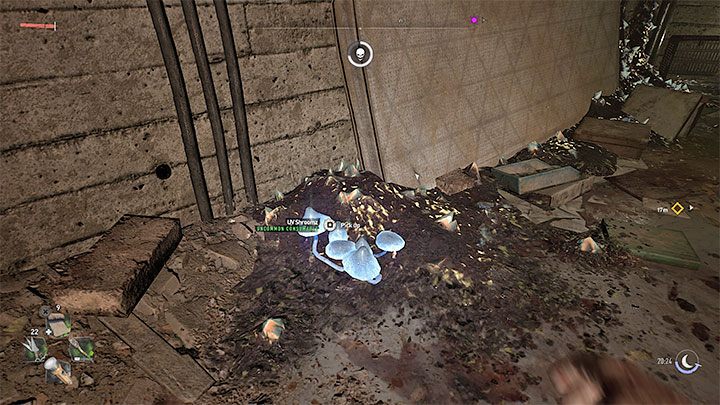 As you follow the tunnels, you'll get introduced to a new mechanic - declining immunity. To combat this, you need to use special items that replenish your immunity either partially or completely. 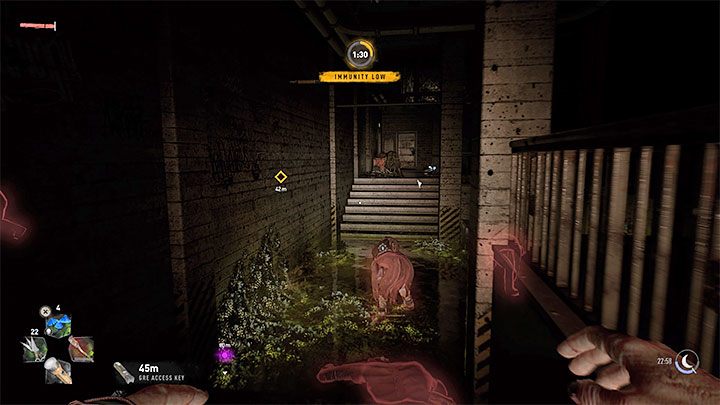 After reaching the tunnels, simply jump into the ventilation shaft. The main part of the quest starts now.

You'll encounter multiple infected in the tunnels - consider sneaking past them, as each battle will lengthen the time you spent in the tunnels and you may not be able to reach your destination before you run out of immunity boosters. 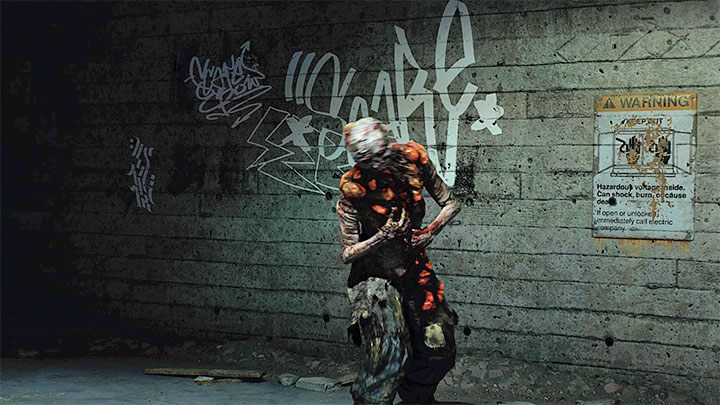 Further ahead, you'll encounter UV flares, which can replenish your immunity fully without having to consume any more supplies.

As you attempt to open a nearby door, a Spitter will appear - as can be expected from the name, he attacks by spitting a poisonous substance. To approach the monster without taking damage, run zig-zag or use nearby pillars as cover. Deal with him with quick melee attacks. After the fight, return to the same door and open it with a picklock. 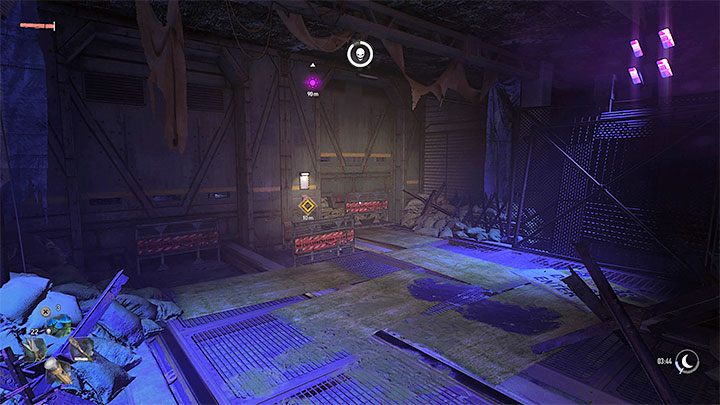 A linear path will lead you to a new ventilation shaft - jump to the opening in the ceiling and start squeezing through the shaft, during which you may or may not listen to dialogue.

After exiting the shaft, go to the airlock. Interacting with it will trigger a cutscene. 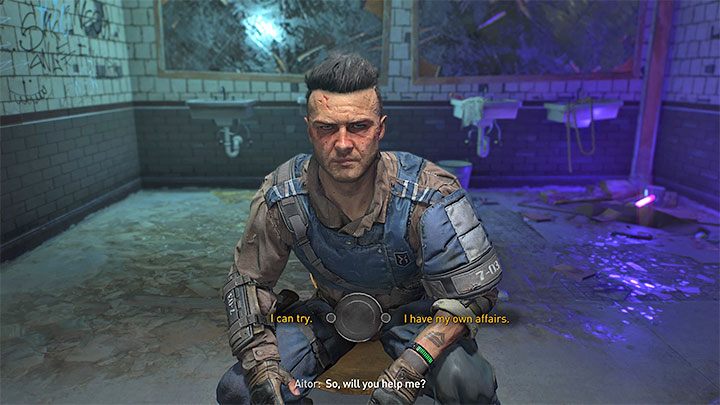 During the first conversation with Aitor, you can ask him additional questions, or express your will to help him or to keep to yourself. Regardless of the answer, you will have to investigate Lucas's death and locate his killer.

After the conversation is over, you will be able to move freely around the Main Terminal Station , which is the local base of the Peacekeepers. You can look around and chat with NPCs, or start the conversation with Hakon right away. 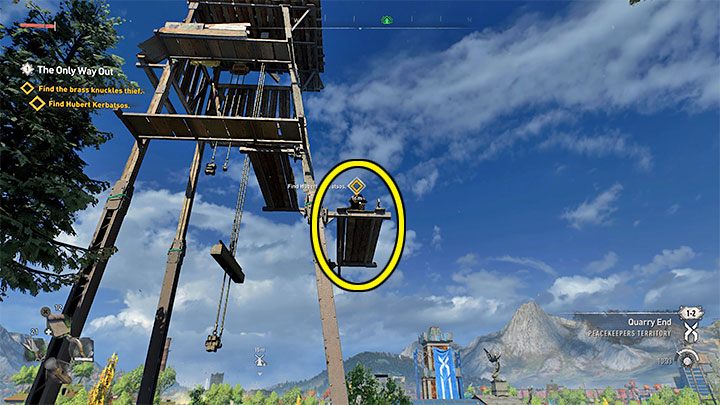 To find Hubert, head south to the windmill in Quarry End. If you use your binoculars, you will notice that a man is hiding on one of the higher ledges at the base of the fan (the picture above). Start climbing the windmill (you'll need to jump to a vertically-moving cargo) to reach the platform and try to talk to the man - unfortunately, the man is Benny, rather than sought Hubert. 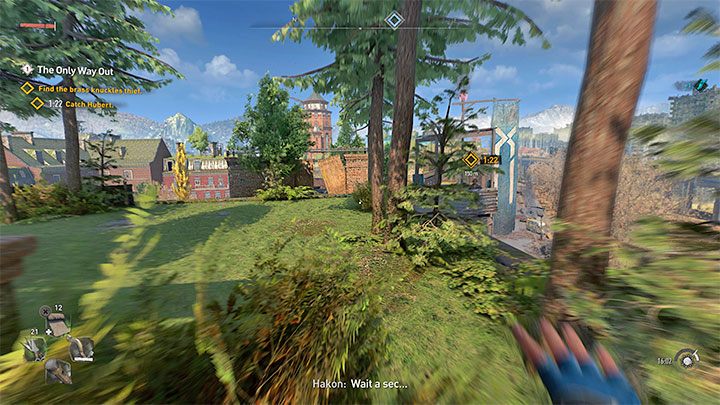 You now need to chase Hubert - to reach him, you'll need to continue running without stopping on the way or falling off the roofs. Close the distance by jumping and performing parkour actions. You have to get to the designated area before the time runs out and if you haven't made big mistakes along the way, you can easily make it within the allotted time limit.

After the chase is over, you may have to deal with the group of men on the roof. Attack them one by one, dodge often, and avoid falling off the roof.

Climb up to the GRE building roof 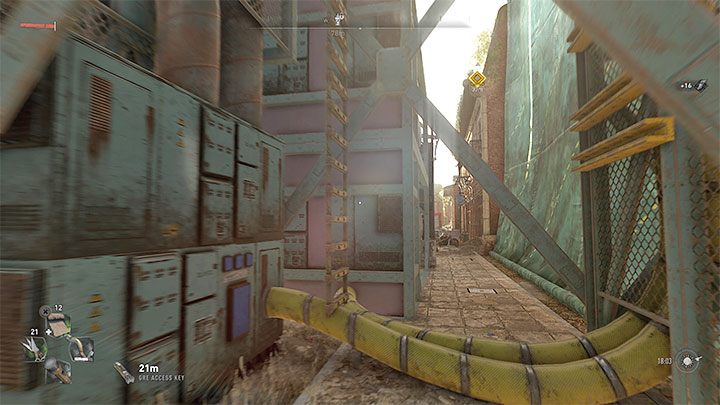 The good news now is that the next sequence doesn't require you to be on your toes. What's more, haste is even inadvisable, as you need to perform a steady climb and avoid falling down.

Start by jumping down and land on the amortizers. Look for the first ladder (should be at the base of the building) and start climbing. 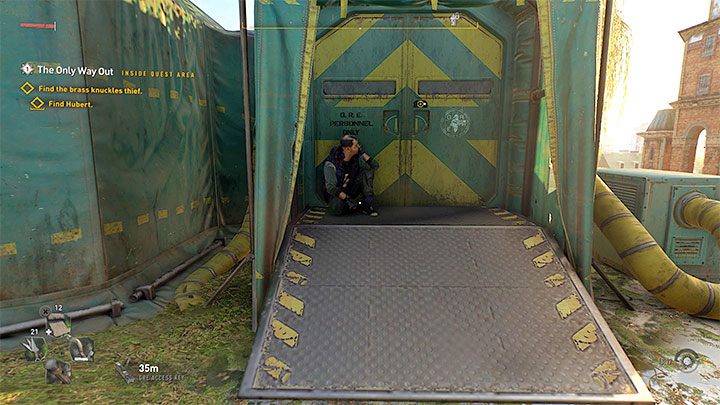 Continue your climb by reaching new ladders and yellow ledges. Time each jump well and pay attention to your stamina bar so you don't fall down.

Once you reach the roof, approach Hubert, who is hiding near the locked entrance to the GRE building. Question him. 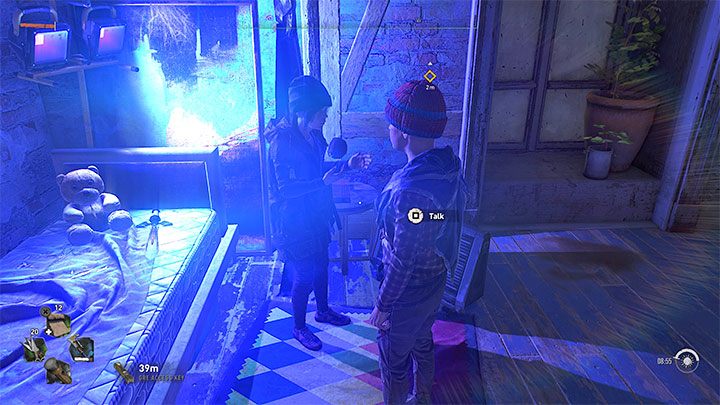 Your new destination is near the border of the Horseshoe district. After reaching the location, enter the dark building through the balcony (don't forget to monitor your stamina bar)

Climb through the hole to the upper floor - there is a GRE chest nearby containing some inhibitors. In one of the rooms in the building, you will meet children, among them Maya. You have to question her. The girl will ask you to pay for the bracelet, but you can choose to negotiate, getting the item for meagre 10 gold. 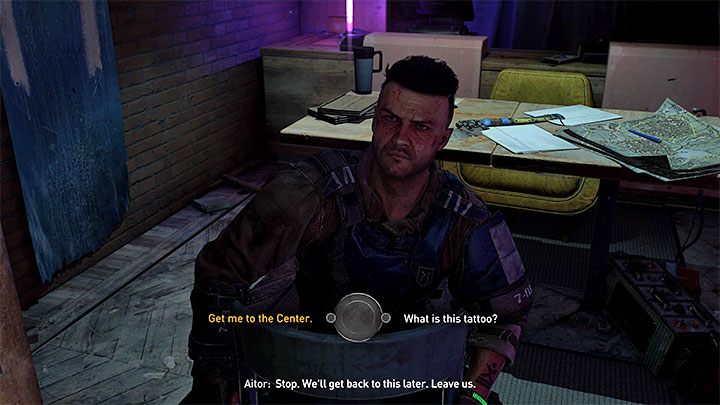 You must make your way back to theMain Terminal Station at Quarry's End. Reach the marked room to begin a conversation with Aitor. During the conversation, you will receive a new melee weapon (Chopper). 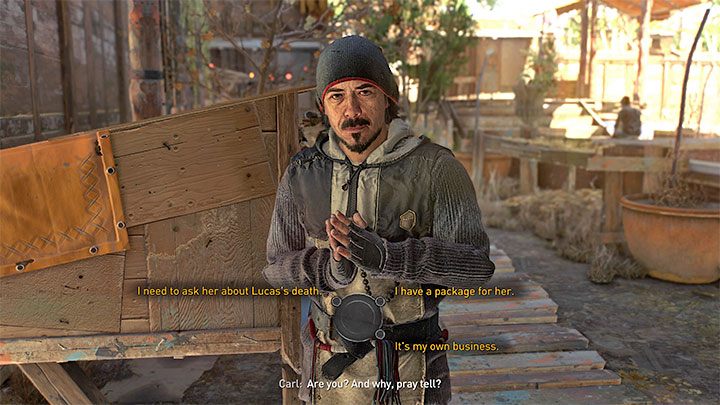 Find Hakon again and talk to him. You will learn about people from the Bazaar who may be potential suspects.

Proceed to the bazaar itself. The conversation with Carl will start automatically. You can choose any reason you want to meet Sophie and a wrong answer won't block you from talking to the woman. 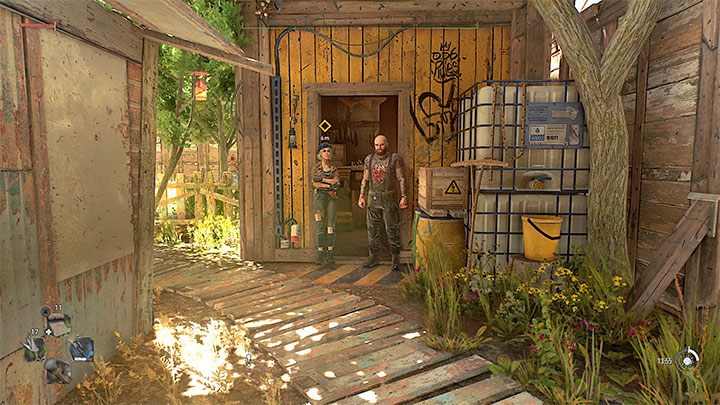 Sophie is in front of the church building and the actual part of the conversation will begin after an unpleasant greeting from her bodyguard. You can ask her a few optional questions and ultimately have to agree to do her a favor.

Ask the craftmasters about the crystals 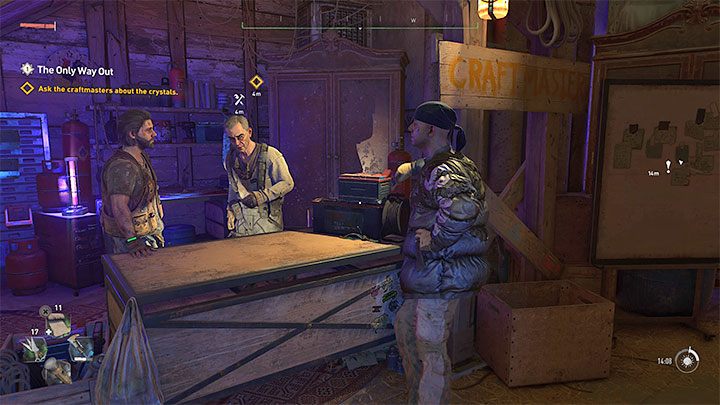 Enter the church and go to the place where Alberto and Vincenzo (the craftmasters) are. Talk to them (to talk, you need to press a different button than the one used to trade).

After talking to the craftsmen, go back to Sophie. You will learn about the problem with her brother Barney and after offering your help in finding him, you will unlock a new story mission, Unruly Brother .