This page of the Dying Light 2 guide includes a walkthrough of the Pilgrim's Path main quest. You will find out, among others, where to find honey and chamomile, how to search the house, how to get to the radio antenna, how to climb the hanging bus, how to defeat the jumping monster, how to unlock the bed, where to find Spike's contact, how to defeat the masked thugs and how to escape Waltz. 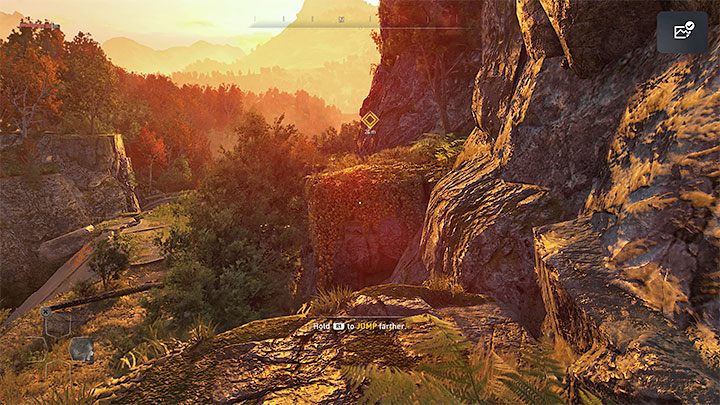 Head towards the ledge where Spike is standing. The game will show you the basics of climbing - jumping, grabbing ledges, and climbing. To jump further, you have to hold down the button instead of just pressing it.

After joining Spike, follow him and listen to his request. 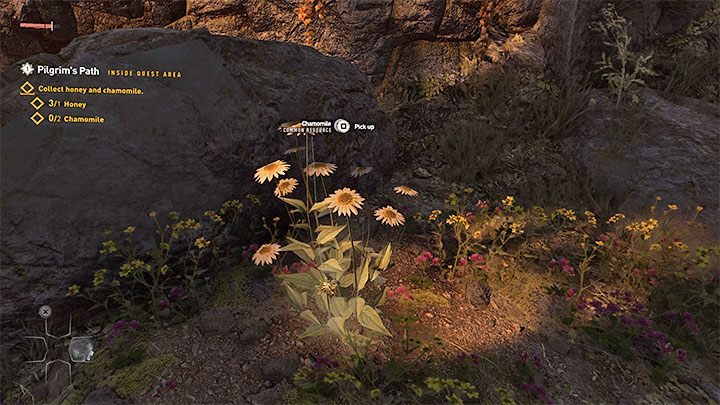 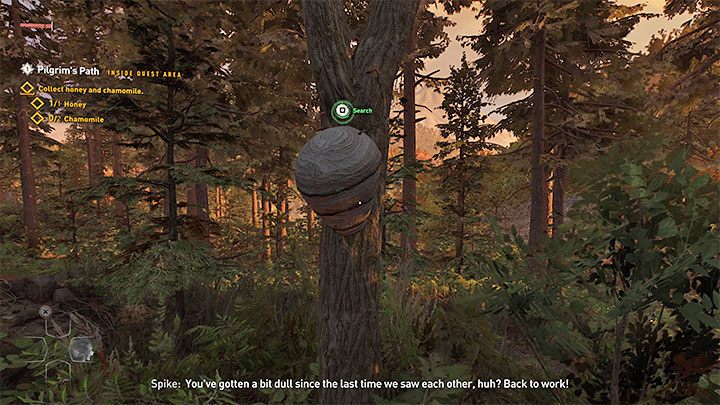 You should start using your survivor sense to "scan" the area and highlight interactive items and loot. There is more honey and chamomile than you need near where Spike is standing.

You can pick up more ingredients for future use or go back to Spike right away. 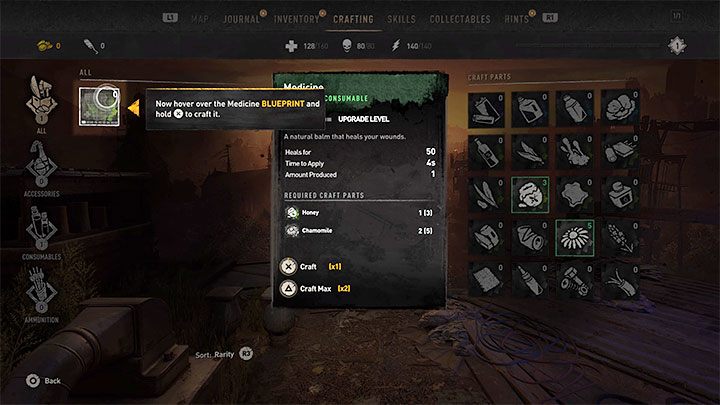 Spike will give you a medicine blueprint. Go to the crafting menu and use the collected ingredients to create at least 1 medicine. It will go to the consumables tab in your inventory. 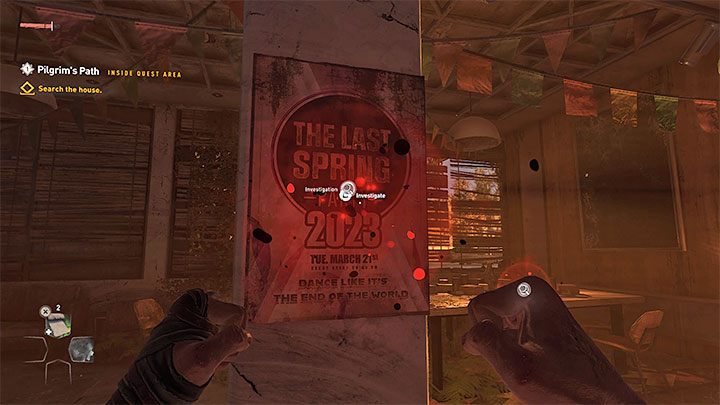 Follow Spike. After entering the property, reach the partially raised gate - you have to crouch to squeeze under it.

After entering the house, use your survivor sense. In addition to loot and collectibles, you can also find interactive objects marked in red (an example is shown in the picture).

Join Spike on the terrace 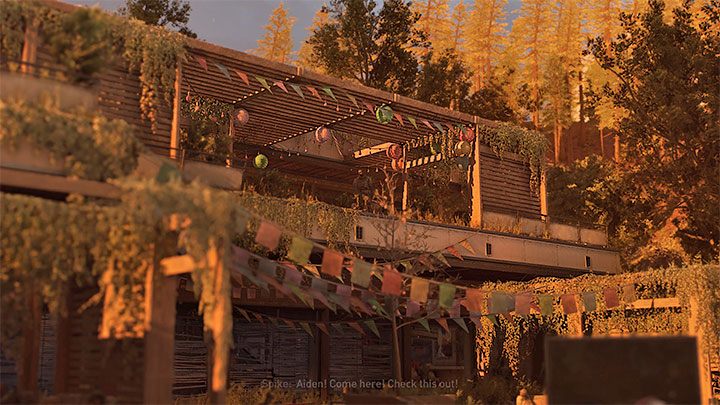 You have to reach the side door. Watch the cut-scene and then head to the garden. There are 3 more traces to find and examine.

A cut-scene will start. To reach your companion, you have to climb the wooden structures in the garden and then make a jump towards the terrace. During the conversation with Spike, you will be able to choose dialog options - white ones are for asking additional questions, and yellow are for advancing in the conversation and for choices (if there are at least two yellow dialog options on the screen).

Get to the radio antenna 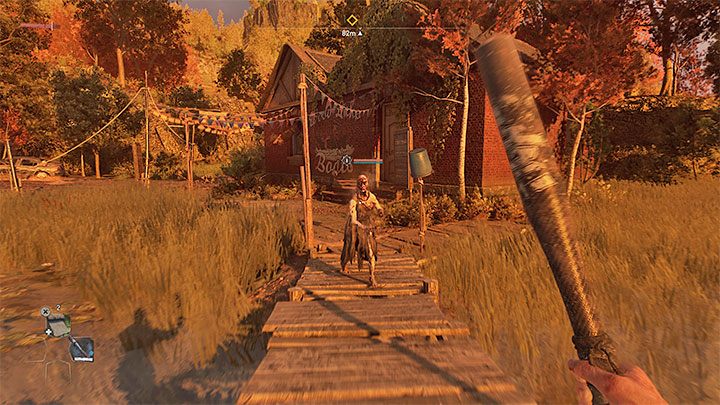 Spike will give you the first melee weapon (Grubby Bat), which will automatically go to 1 of the 4 active weapon slots. Reach the gate of the property and start moving towards the marker.

On the way, you will have to jump off a cliff and fall into the water. After leaving the water body, you will encounter the first zombies - you can attack them with the received weapon (remember about the stamina bar!) or avoid (the enemies are slow). You can also explore the area - you will find, e.g. a new melee weapon. 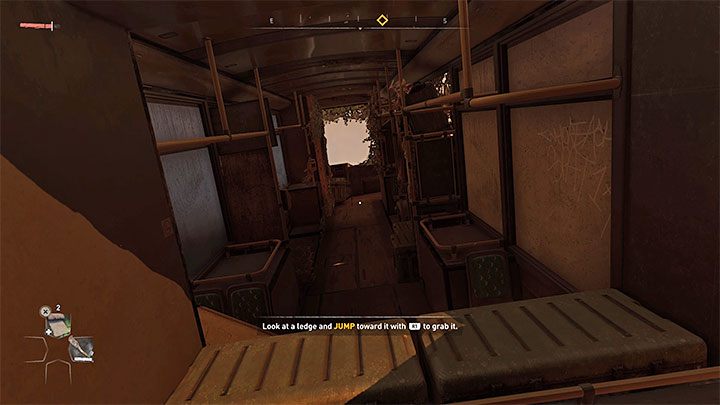 You will reach a place with a city bus hanging down. Stand exactly under the hanging bus (it won't fall down on you) and then start jumping to the next bars and other elements you can grab. You must climb to the top before you run out of stamina - the hero will then lose strength and may fall down. 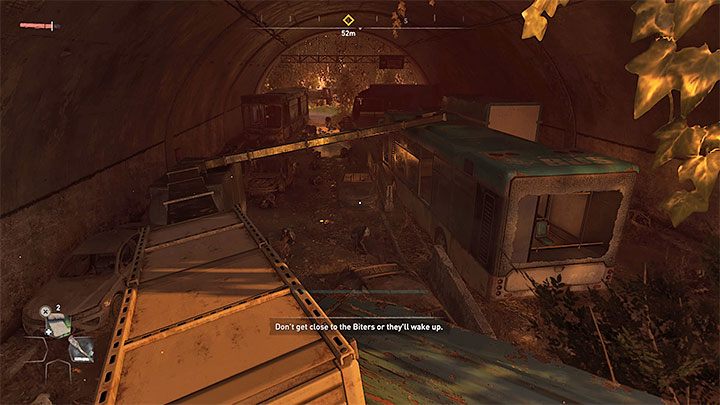 Go through the tunnel - the game will suggest testing the stealth mechanic. You can sneak past the "sleeping" infected without fighting them. Starting a fight doesn't mean you fail the mission, but you can have a hard time surviving this early in the game.

The most convenient way to sneak past monsters is to use the roofs of large vehicles and passages connecting them (you can also perform far jumps). You can also "discover" the positions of the infected by activating the survivor sense. 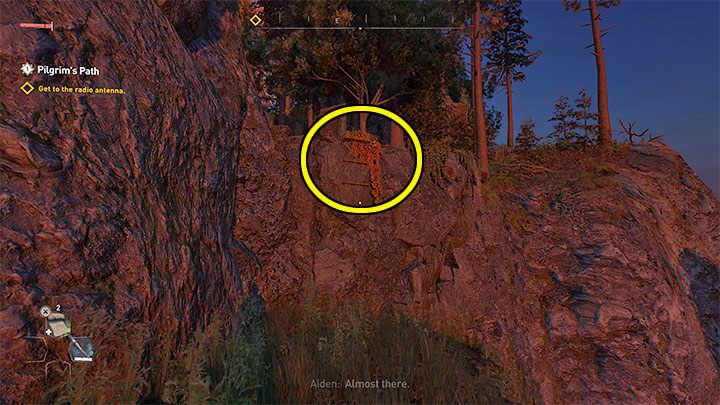 After leaving the tunnel, you have to start a new climb - it involves, among others, grabbing bars, jumping on protruding beams, sliding down the rope, and jumping to hanging ropes (you can swing on them).

Along the way, you will unlock your first parkour point - spend it on one of the skills. The first purchase is pre-determined - it has to be the High Jump, which allows you to jump higher. It will be useful for you to jump towards the higher bars marked in the picture.

Search for a safe place to sleep 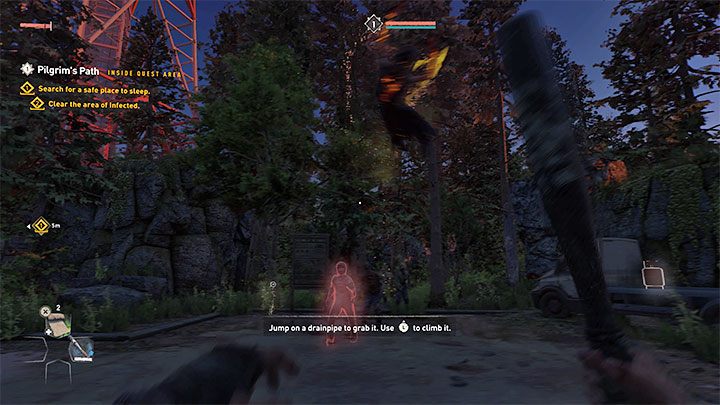 You will reach a seemingly abandoned house. Try to raise the garage door on the right. Monsters will appear, among them, there will be fast and jumping infected.

This fight is a kind of tutorial on reacting to heavy attacks and dodging. You have to jump to the side after the monster leaps towards you and uses a strong attack (signaled by red light). This action will only be successful if the dodge is performed at the last moment. Otherwise, the monster will be able to "adjust" its movement and hit Aiden. 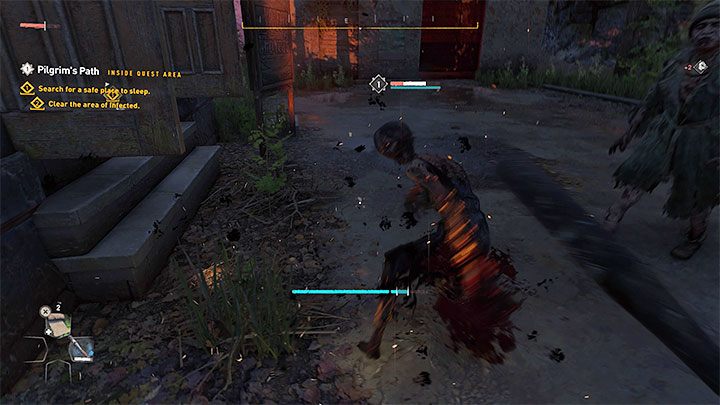 When a monster misses its lunge attack, run towards it and attack. Use the best weapon you have for this, preferably one that hits fast.

There are also "regular" zombies in the area. You should ignore them most of the fight and simply keep your distance. Attack them only if they surround the main character. Take care of the regular monsters only after you kill the jumping infected. 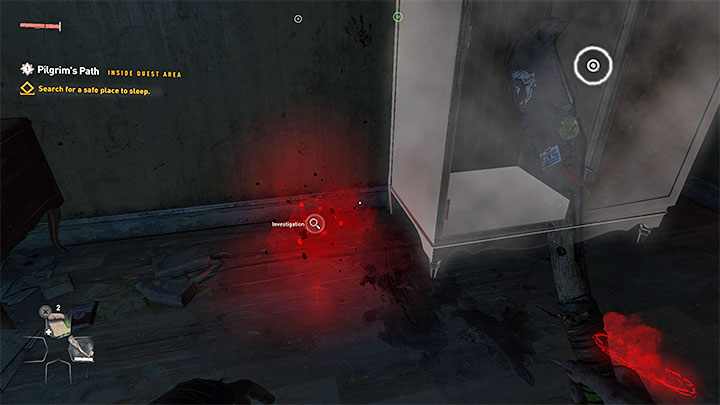 After the battle, go back to the house and go upstairs. Use your survivor sense here to find the red tracks. They will lead you to a wardrobe - interact with it. 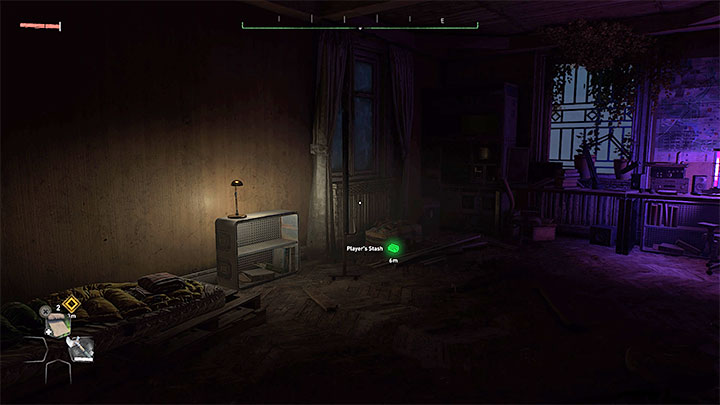 You must also restore the electricity. Go back to the garage next to the house and turn on the generator.

You can now go to the recently unlocked room on the first floor. You will find: 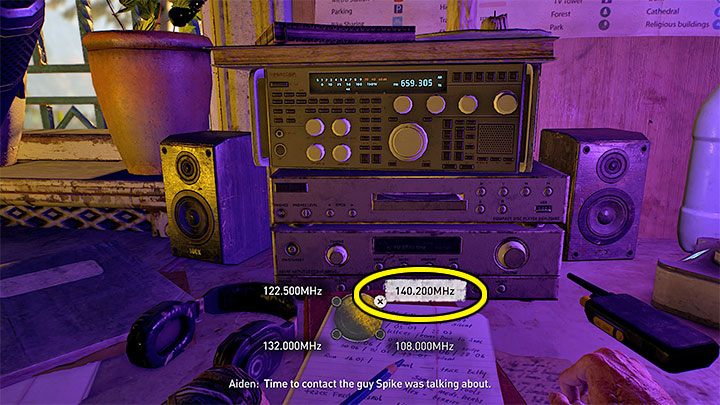 After watching the flashback, Aiden will use the radio. As a reminder, the correct frequency is 140.200MHz.

Go through the forest and slide down the rope along the way. If you are jumping from a greater height, land on rubbish or amortizes - the large X signs. Jump into the water again and after swimming further, kill or avoid the new zombies. Your goal is to enter the subway tunnels. Go straight to the place where you will have to confront a Volatile. Luckily, you don't have to fight this monster right now. 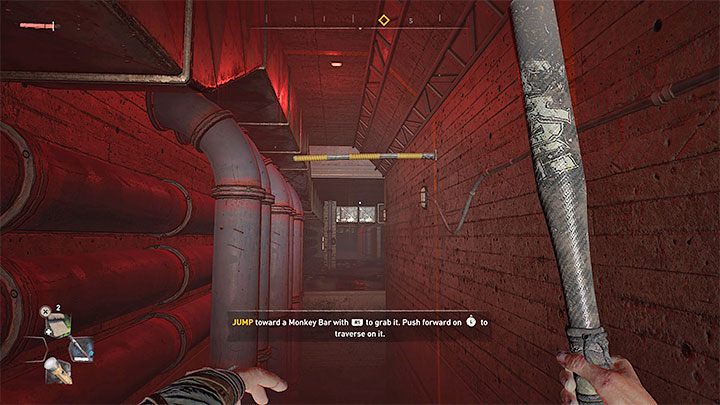 After watching the cut-scenes, you will get a flashlight - use it to illuminate the darkness, although it increases the risk of alerting enemies (monsters and living opponents).

Use a melee weapon to destroy the boards blocking the passage. You will come across bars - you have to jump towards them one by one. Reach the entrance to the ventilation shaft and use it to go to the metro station. 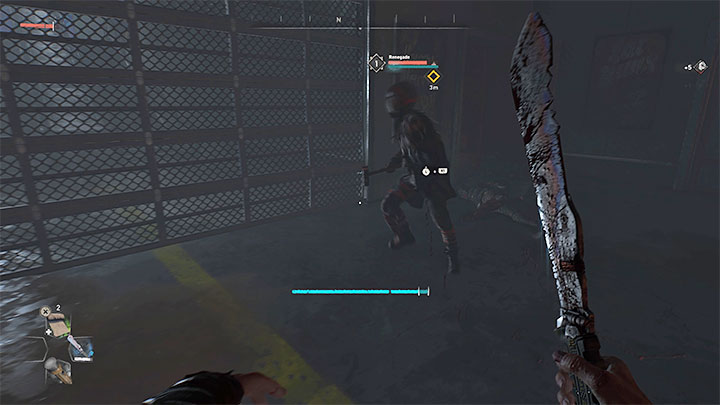 You will encounter renegades for the first time - this is a tutorial on how to use various moves in hand-to-hand combat:

Additional tip - Be on the move at all times and don't let the opponents surround Aiden or disappear from your sight. Also, keep an eye on the stamina bar.

Escape from Waltz and his henchmen 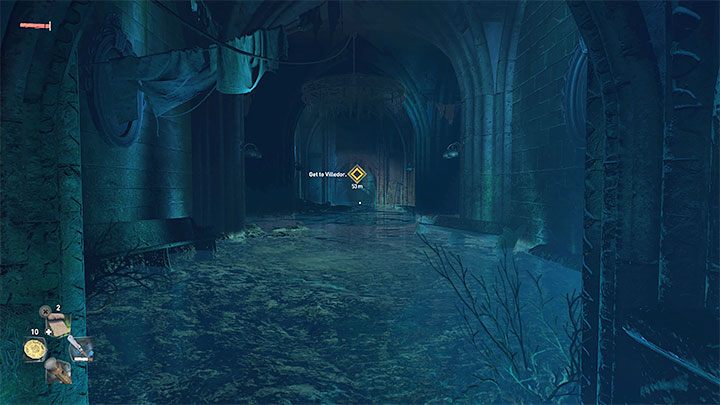 After winning both fights, talk to the contact again. Soon you will regain control of Aiden. Follow the only possible route and avoid obstacles.

You have to go through the sewers and reach the exit to the surface. This will start the Getting Stronger main quest.