This page of the Dying Light 2 game guide contains the beginner's guide we've compiled for players just starting out their adventure in this action horror game. The following tips cover a variety of topics, including combat, exploring the world, parkour moves, developing the main character and dealing with dangerous situations. 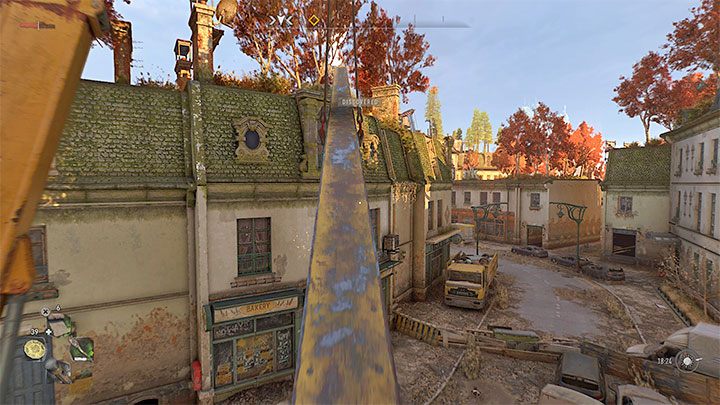 In Dying Light 2, in order to comfortably navigate the game world, you will need to effectively use various parkour moves. Some of these moves are available from the very start of the game and you should practice all the basic actions - performing short and medium jumps (often over narrow objects), fast climbing, grasping the edges and safely jumping to lower ledges. Roofs and high platforms are ideal for training, since your chances of encountering enemies are significantly reduced.

By learning the basics of parkour, you will have an easier time during quests and single combat encounters that require you to run away from monsters intent on pursuing your character or chase a fleeing enemy. Later in the campaign, you can unlock new parkour skills. We have described this topic in more detail, among others, on the Leveling up and Best build pages (our recommended skills and equipment for parkour).

Use blocks, parries and dodges during fights 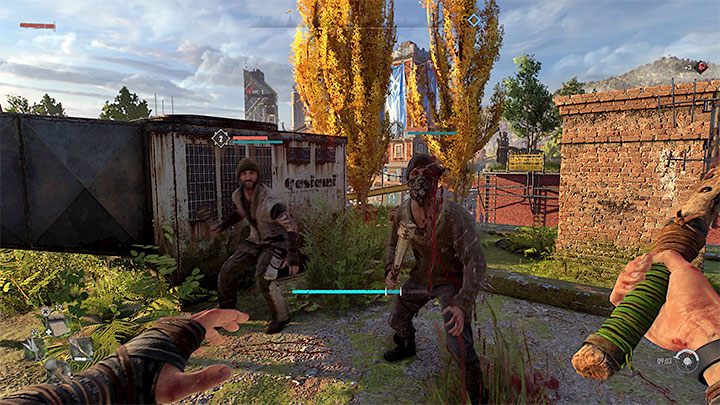 During the first hours of the game, it's unlikely that you will have access to good ranged weapons and, as a result, you will have to resort to melee combat. There are 3 main types of moves that can help your character stay alive:

Over the course of the campaign, you should upgrade the aforementioned moves, for example by buying new skills. Among other things, this method allows you to unlock the Perfect Dodge, which allows you to stagger your opponent without touching them. More tips on what to do during fights can be found on the Combat page.

Always keep an eye on your stamina bar 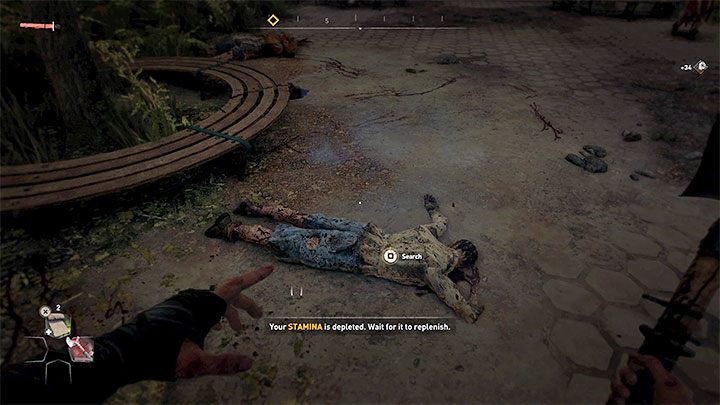 The stamina bar only appears on the screen when performing actions that require physical effort - this mainly involves melee attacks and climbing. It can get drained quite quickly and if you run out completely, you are in trouble:

In both cases, make sure to react ahead of time and take a short break from activities that use up stamina so that the bar can recover automatically. On the Stamina - how to recover? page, we have described this topic in more detail and we've also included tips on how to temporarily or permanently extend the stamina bar. 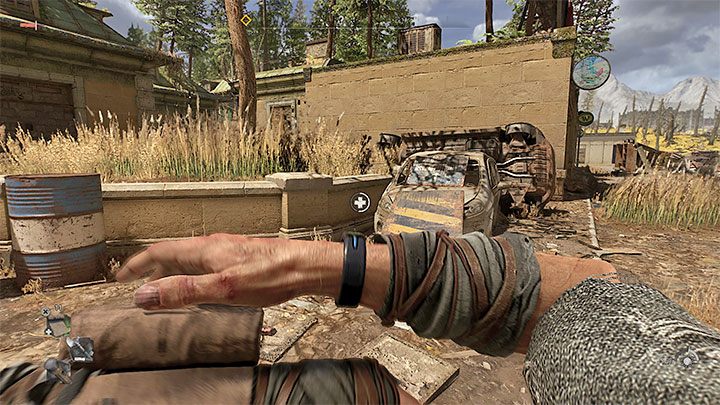 If you want to stay alive, you need to keep in mind that there is no automatic health bar regeneration mechanic in the game. You have to restore all lost health points on your own - mainly through the use of various types of drugs and boosters.

If you are notified that your health is low, then it's a good idea to run away or distance yourself from enemies so that you can regain at least a portion of your missing health. You should also make sure that you always have some healing items on you so that you can use them as soon as it's necessary. To learn more about buying, finding and crafting drugs, check out the Health - how to restore health? page, where we discussed this topic in more detail.

Scan the area regularly with the Survivor Sense 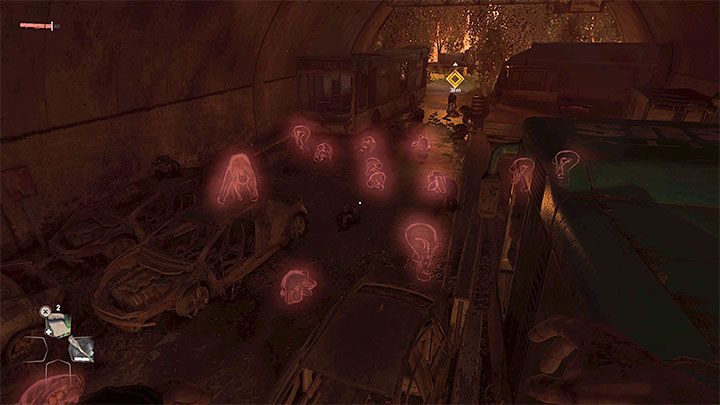 The Survivor Sense is a mechanic that works similar to sonar - it marks crucial elements in the field of view. Thanks to it, you can scan the nearest area . This action is free and unlimited and available from the start of the game (by pressing the right analog stick on the controller or Q on the keyboard).

The Survivor Sense is mainly used to find loot, which includes visible items (weapons, crafting materials, collectibles and others), as well as objects hidden within various types of containers (wardrobes, chests, drawers, etc.). Apart from that, you can also locate enemies, who are then highlighted in red, which is especially helpful in locations where it's best to use the stealthy approach. To learn more about investigating your surroundings, check out the Exploring the game world page. 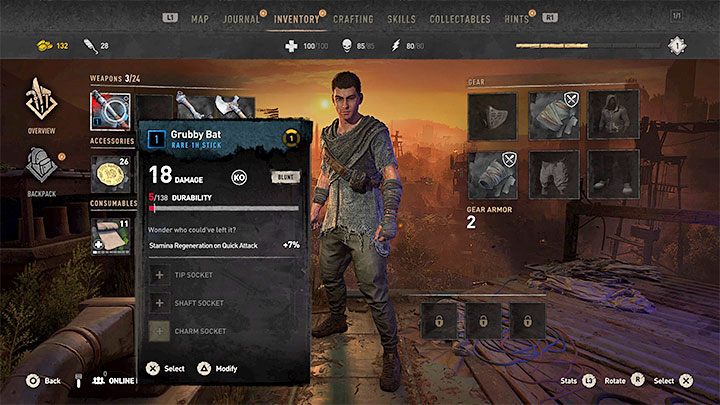 Weapons in Dying Light 2 have an indicator called Durability - it tells you how long a given weapon can be used before it's completely destroyed. Weapons lose durability each time they are used to attack an enemy, e.g. if it has 138 hit points, it can be used to successfully attack 138 times (if you miss, it doesn't count).

This problem is mainly countered by stocking up on weapons. We recommend that you carry at least 4 weapons in your inventory, if possible, which also allows you to swap them out when necessary. You can find new weapons in the game world, receive them as rewards or buy them. We also recommend that you save your best weapons for later and only resort to using them during difficult combat encounters. Weapon durability is discussed in more detail on the Fixing weapons - is it possible? page.

Sneaking and running away are alternatives to combat 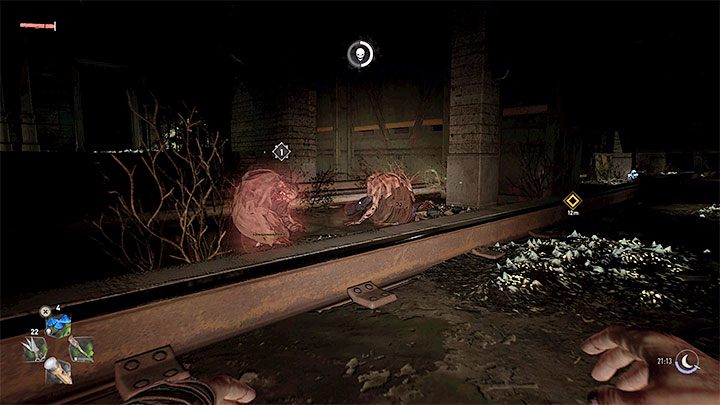 Most of the potential encounters in Dying Light 2 are completely optional. Instead of engaging in combat, you can:

Additional note - you shouldn't avoid direct combat at all costs, because fighting is a good way to gain proficiency experience points and, as a result, to level up your character faster. Focus on stealth and running away when you are weakened or when you encounter extremely strong enemies.

Try to thoroughly explore each district of the city 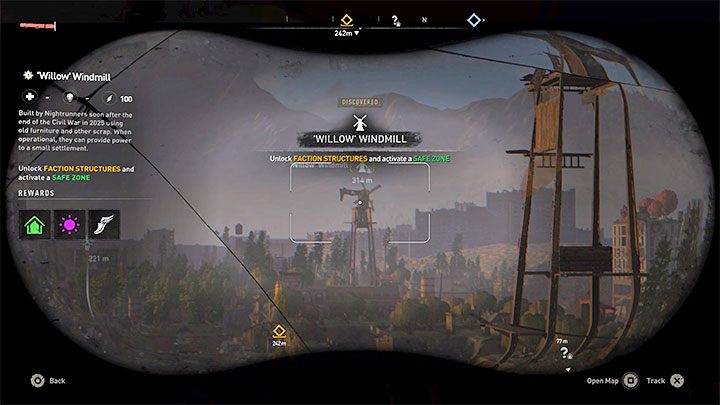 The world map is by default covered by the so-called fog of war. This means that you have to reveal the map on your own by exploring the covered locations. Once you approach a unique location, it will be marked on the map. In particular, we advise you to look for windmills and safe zones - these locations can become hideouts, allowing you to hide there after dark, use the bed, and more. Additionally, you might also come across unique locations to take over or explore (many of them are initially marked with question marks) or characters giving out side quests.

There is also an alternative way of discovering new locations, which involves using binoculars, which are unlocked by completing the Markers of Plague main quest. After surmounting a tall structure, you can take out the binoculars and use them to mark locations to visit. It's worth noting that you don't need to visit these discovered locations immediately, because their icons won't disappear from the world map (this doesn't apply to encounters that are small random events). 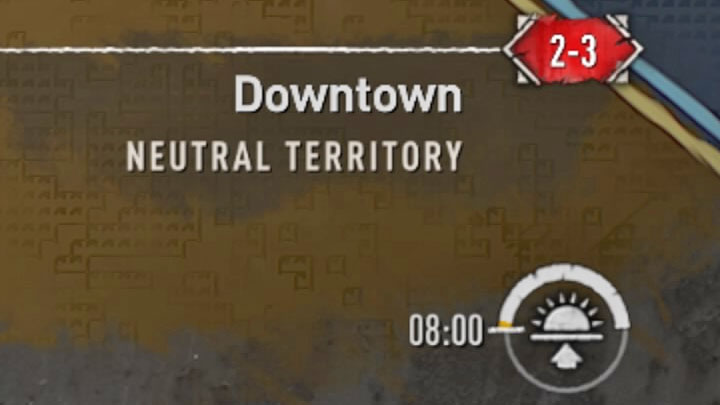 In Dying Light 2, ranks, which can also be called levels, play an important role. They are one of the RPG elements in the game and cover several different categories:

The ranks and their effect on the gameplay are described in more detail on the page Leveling up.

Don't take too many risks during the night 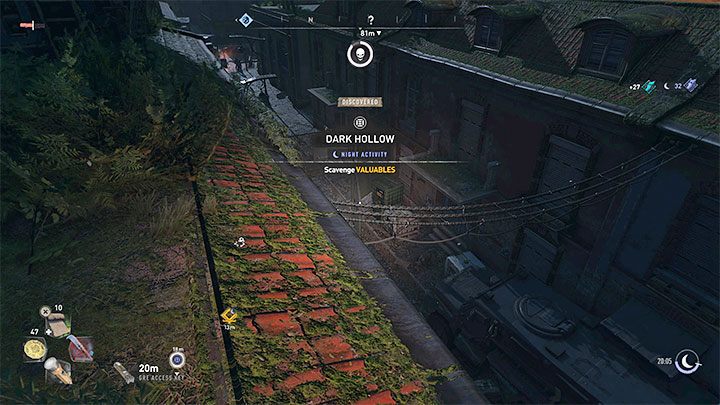 In Dying Light 2, the developers put more emphasis on encouraging players to perform various activities after nightfall. When it gets dark, you can unlock unique activities or lower their difficulty level. For example, Aiden can complete night quests or investigate locations with valuable loot, since most of the monsters guarding these areas leave once the sun sets. This is a good way to obtain valuable equipment and to level up your character faster.

Unfortunately, traveling at night is also full of dangers and the most important thing is the immunity bar - never allow it to fully deplete, because it will be tantamount to losing the game. You have to use special items or return to the location with UV lamps in good time. After dark, it's also easier to be chased when a howler notices your character. In this case, you should start running away immediately and lose the monsters or return to a safe location.

For more advice and information on what to do after dark, check out the Immunity - how does it work? and Traveling at night - is it worth it? pages.