This page of the Dying Light 2 game guide has a list of tips and hints regarding combat and stealth. You will learn how to keep your character alive while fighting enemies (both living and zombies), as well as how to avoid being detected and perform stealth attacks. 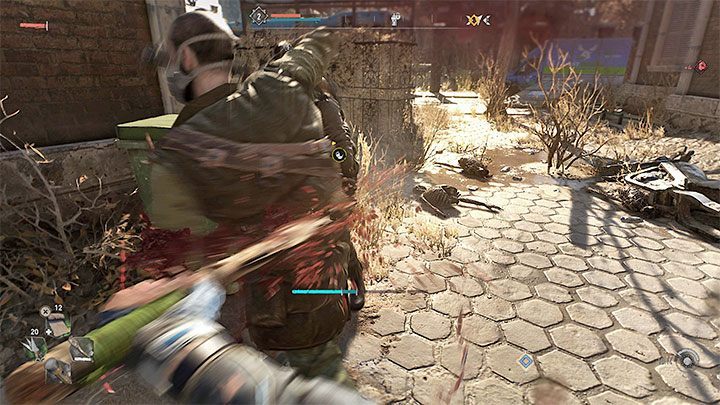 In Dying Light 2, the vast majority of the fights at the beginning of the game are fought with melee weapons. There are many different variants - they can be one-handed and two-handed and weapons that deal blunt or cutting damage. You should choose them based on your preferred style of play and how you develop your character - an example is described on a separate page, Best build. You also have to remember that melee weapons degrade when you use them. After losing all durability points, they are irretrievably destroyed. Fortunately, this is not a significant problem because you can easily find or buy new weapons. They can also have higher ranks, meaning better base stats.

Melee attacks can be more complex than simply swinging the weapon around. You will learn some moves during the prologue. The most important include blocking, parrying, and dodging enemy hits. The latter two methods are especially effective, but remember that parrying does not work against (signaled) strong attacks. You can also unlock skills that increase their effectiveness (e.g. staggering the opponent or bullet time) or letting Aiden to use strong attacks.

During the fights, be sure to monitor the stamina bar because depleting it will make the hero lose his strength. This case is discussed in more detail on the page "Stamina - how to replenish?". The easiest way is to move away from the enemies after your stamina drops to a low level and wait a moment. 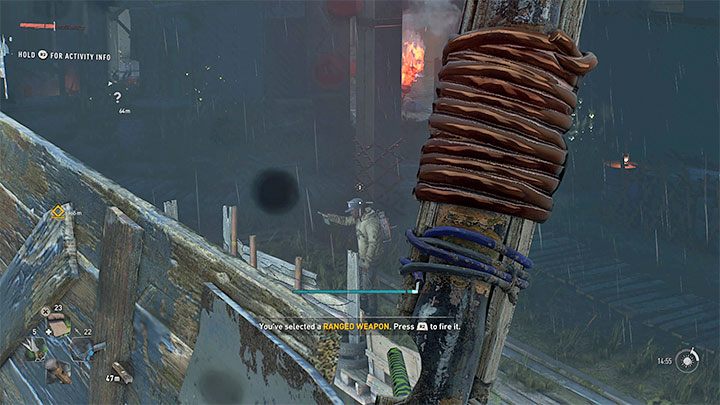 If it comes to ranged weapons, you have to reckon that it will not be possible to use them at the beginning. They don't appear until a bit later in the game, and we have described it on the page "First bow - how to get it?". Ranged weapons include the crossbow and bows, which come in different varieties. These weapons can be very effective in stopping enemies, and, unlike melee weapons, they do not degrade. However, you have to obtain ammunition for them, which you can craft (you need, among others, large amounts of feathers) or find them in the game world.

In the case of the bow, more advanced techniques of ranged combat can be unlocked thanks to the skills - choose Precise Aiming and Power Shot. They will allow you to zoom in for more accurate shots, and to release projectiles that deal more damage and are effective against strong enemies.

In general, when it comes to weapons, we recommend using various weapons - try to have diverse ranged weapons and a bow or crossbow ready. This will allow you to deal different types of damage to your opponents and better adapt to the situation and enemies you encounter, which may be easier to eliminate at a distance or in close combat. 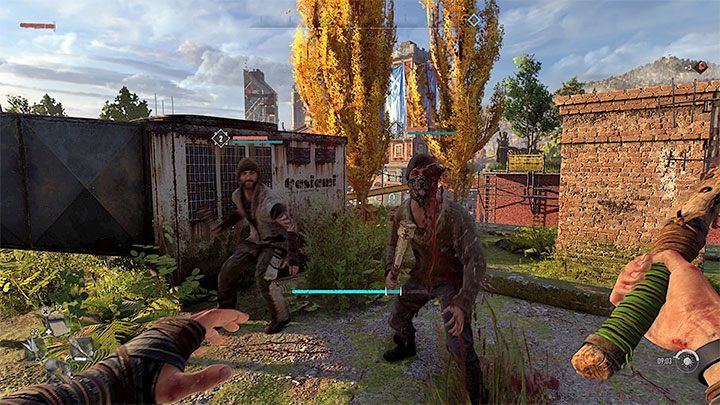 The main living opponents in Dying Light 2 are Renegades - this is one of the main factions in the game involving various types of bandits and ex-prisoners. They appear not only in selected quests but also during open-world exploration. They may even try to set traps for random people and attack them by surprise.

When fighting with humans, you have to remember that they are smarter and more agile than most zombies. They can block your hits, dodge shots, try to surround Aiden, or use ranged weapons to attack the character without approaching him. Whenever you have the opportunity, always attack Renegades by surprise - with a bit of luck, you will get rid of one or more of them already from the start. During the actual fights, try to quickly eliminate the enemies fighting at a distance and attack opponents one by one. 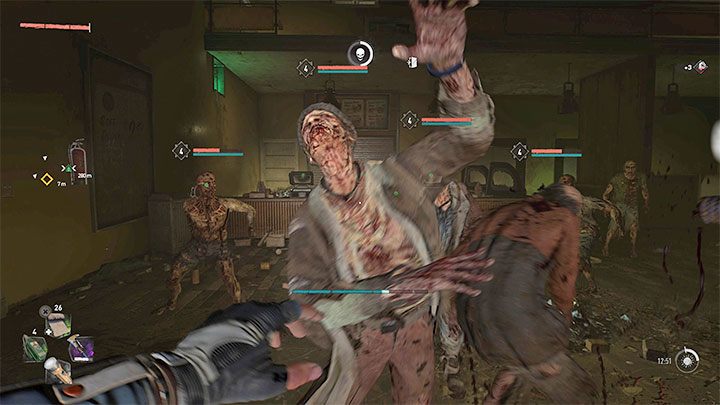 In the case of monsters, slow zombies are by far the most common. Single ones are not a big challenge, but avoid being surrounded by a group, especially if you are currently in a smaller room or corridor.

Of course, battles with zombies are not obligatory, and you can just bypass them without eliminating them. Later in the game, you can even unlock the skill to bounce off zombies. An interesting way to avoid confrontation can also be walking or flying over them, as the "standard" types can't climb.

You can use all available equipment to kill monsters - melee weapons, ranged weapons, and consumables (for example, Molotov cocktails are helpful). In case of hand-to-hand combat, watch out for zombies trying to catch the hero. If this happens, you need to break free quickly to avoid getting bitten and losing your health. 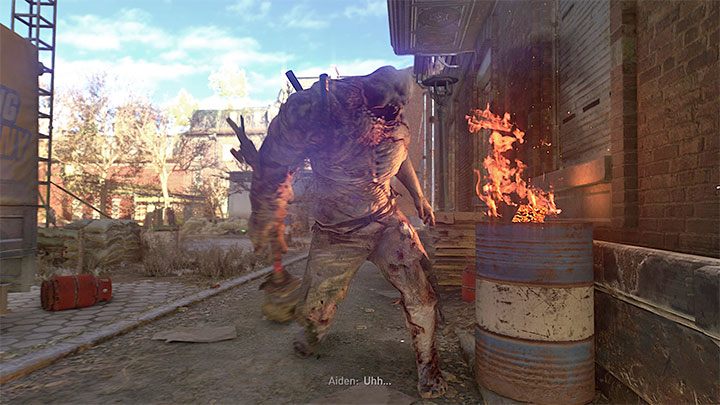 Many fights with Renegades involve big opponents with two-handed weapons. They are dangerous in close combat - attack them with ranged weapons or dodge to avoid Aiden being hit.

Their various variants appears in fights with zombies. We have listed the most important of them on the Monster types page, and you will also find recommended techniques for fighting them or avoiding being detected by the infected. The general rule is that you should try to attack elite monsters from a distance because only some monsters can respond with ranged attacks. The rest will be vulnerable to your attacks, and you will avoid the risk of sudden death resulting from dangerous close combat.

Throughout the campaign, there are several bosses to defeat, and the confrontations with them are unique - we have included them in our walkthrough of the game. 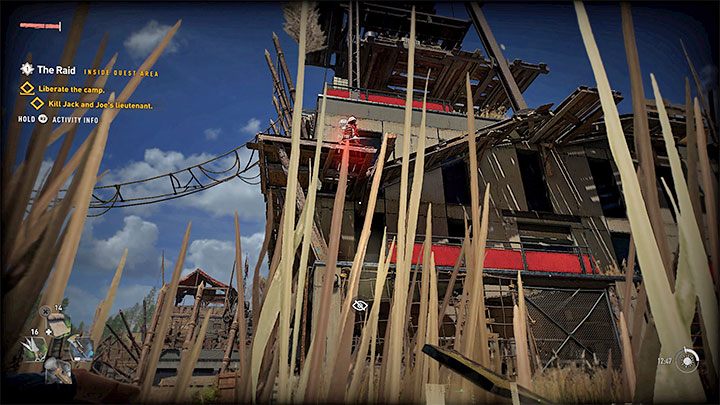 Stealth actions are possible in Dying Light 2, and they can make it much easier for you to deal with some situations. This mainly concerns situations where:

When stealth, the key is finding enemies with the survivor sense. Remember that "scanning" the area is free and unlimited. You can locate enemies before entering a given location and follow their actions during infiltration. To stay hidden, you can hide behind covers and in high grass or use a decoy to distract opponents. 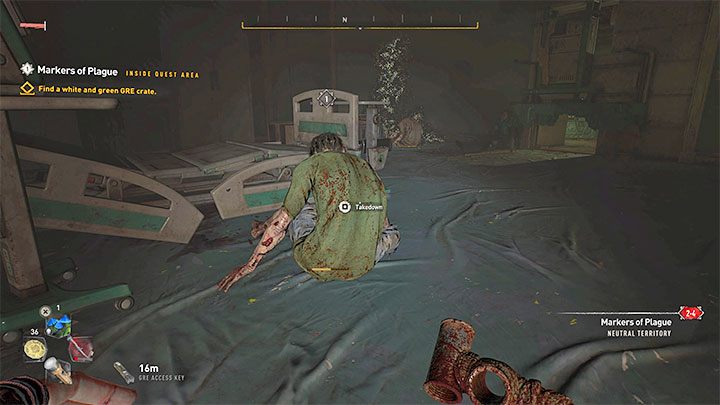 There are several variants of silent takedowns available in the game. The easiest way to do them is by sneaking up on enemies from behind and grabbing them. By purchasing the Stab skill, you can kill them quickly after that. One alternative method is to use the Smash skill to jump down on enemies from higher shelves and crush their skulls.

If Aiden is detected, the chase may start, and it looks different depending on who is participating in it:

Day and night system and how it affects the game 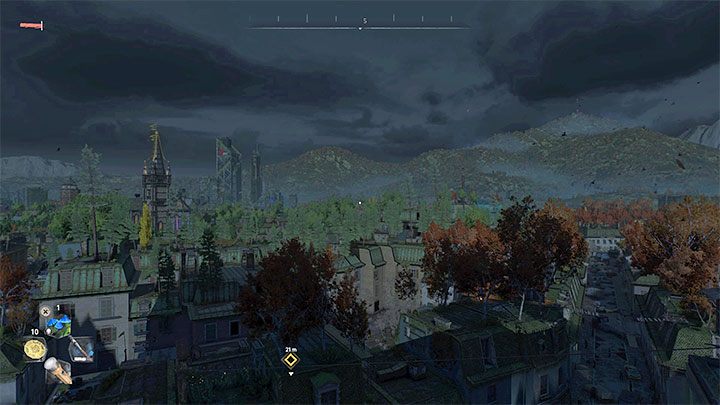 The mechanism of changing the time of day is described in more detail on the page "Day and night cycle". Below, you will find the most important information about the time of the day's influence on the gameplay.

While wandering the streets during the day, you will mainly meet bandits and hordes of standard zombies. Most of the enemies shouldn't be too much of a challenge - you will be able to fight them, move away from them or escape them quite easily.

The night hours are not as stressful in Dying Light 2 as in the first part of the series. It's because the Volatile, extremely dangerous type of the infected, do not appear on the streets right away. So you don't have to be afraid to travel at night and skip this time of a day. Of course, this doesn't mean that there is no challenge. Avoiding or silently eliminating Howlers is also important - these are monsters that can alert the area and start chases. If the chase has already started, you can fight or use the UV light to scare the monsters away.

Exploring the world at night is additionally rewarded and the most significant advantages are described on the page Traveling at night - is it worth it?. In short - after dark, you can safely visit "night locations" (for example, Metro Station and GRE Quarantine Buildings) with valuable loot. Additionally, the game gives bonus experience points for combat and parkour activities performed at night.