After finishing her first quest, she'll give you another. It's the same type of quest - bring some samples. 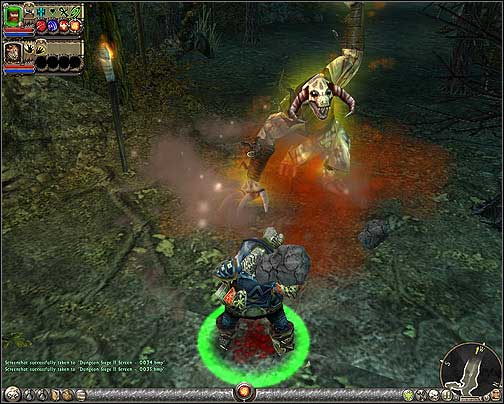 The killing of mad Celeb'hel in Arinth's Heights was successful. After this fight you've got Celeb'hel's Soulstone, which purpose is unknown to you.

In the Calennor Wood you'll find a strange place full of flowers [The Calennor Wood - 7]. The person standing there is... Celeb'hel! He didn't die, because you've killed his "shadow". The real Celeb'hel wants to save the Elves using his "shadows" to collect magic energy sources. He needs their soulstones. One of them is in Vai'kesh Sanctuary [A Small Vai'kesh Sanctuary - 5], but you can't go there now. First go for search of the second soulstone, which is somewhere in The Calennor Stronghold [The Calennor Wood - 10]. When you'll find there a corpse with Vai'kesh sword, the other soulstone from Vai'kesh Sanctuary can be obtained. Go to the Vai'kesh camp [Western Vai'kesh Forest - 3] and enter the sanctuary. Return with soulstones to Celeb'hel. When he gets the stone, he'll die. If you decide not give them to him, he'll transform to a henchman. 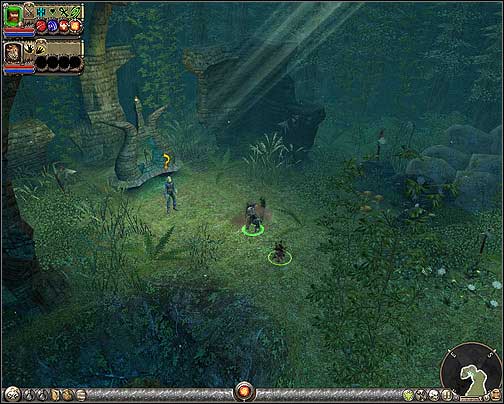 In Aman'lu you can find Kylis [9]. He's the Elf, which wants to build a new town. Minli, his old friend, has been bounded and she's now attacking Kylis, when he goes out for some materials. He asks you to kill her to stop her suffering as bounded creature.

Minli likes glowing objects, so Kylis gives you a bunch of metal scraps to lure her. Go to the nearby bridge in Old Aman'lu [10] and drop the metal object on the ground. Bound Faerie's will appear on both sides of the bridge. Kill them. Now it's time for Minli. After defeating her go back to Kylis. 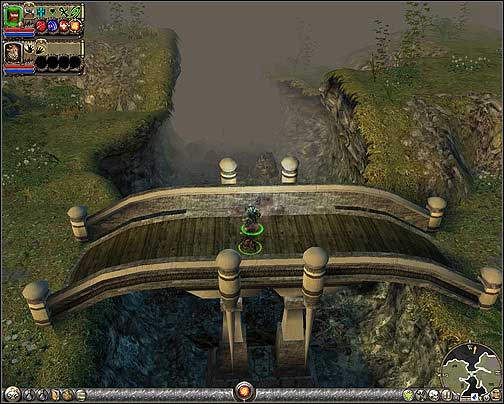 You have a date with Minli here.

This quest is known from the base version of Dungeon Siege 2. Rules are the same. You have to buy a special token, which will allow fighting on the arena. There are ten fights. When the fight is over, you can open one of the arena doors with a special key to get the treasure.

The entrance to the arena can be found at the inn [Town of Aman'lu - 5]. You have to push a lever to use an elevator. In the arena you'll meet Daesthai, which sells tokens. If you win all the ten fights, he'll reward you with Ancient Agallan Tablet (it can be exchanged for a unique item in the Dryad Outpost). 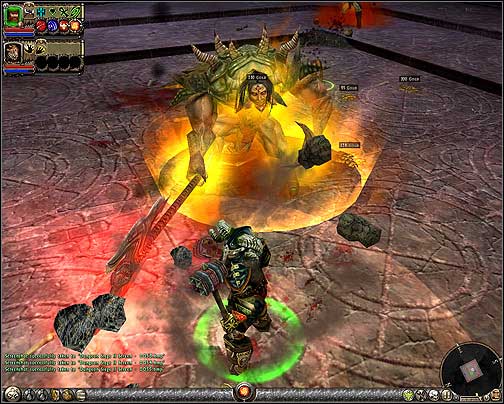 One of your arena enemies.

In the Western Vei'lutra Forest you'll find Ressa [6]. This Blood Assassin wants to fight with the evil creatures, but she needs a special blade. She asks you to bring her few ingredients needed in enchanting.

Ressa needs for her magic: Elves blood and child's tears. First ingredient you can found deeper in the Western Vai'lutra Forest, where the Bound Elves appear. Kill them and collect ten vials of blood. Bring them to Ressa. The Second ingredient is a tricky one. Do you remember a child standing near Soram in The Dryad Outpost? Go there and talk to child. Make him cry and the tears are yours. Return to Ressa. She will need one more thing. You'll have to bind Lorethal's soul in a bloodstone. Go to The Sepulcher of the Crimson Hunters [15]. You'll notice that it's empty and silent. On the end of this tomb is Lorethal's grave. Talk with him. The place will fill with ghosts of Crimson Hunters. They're dangerous, so try to avoid being surrounded by them. After you'll manage to escape, go back to Ressa. She'll make that blade and give it to you as reward. From now on Ressa is a henchman. 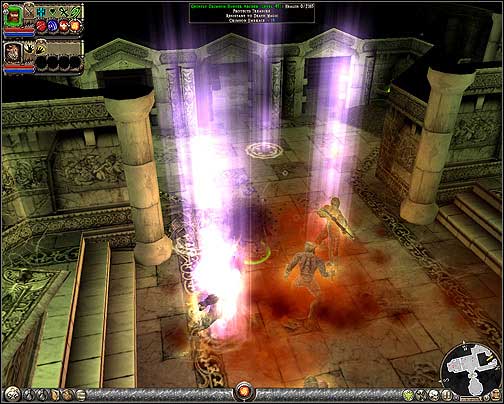 Ghosts of the legendary Crimson Hunters.

At the inn [The Town of Aman'lu - 5] you'll meet Talain. He tells you a story about Estelath Warriors. He's one of them and their goal is to fight with evil. Recently his men were lost near the ai'kesh Forest. 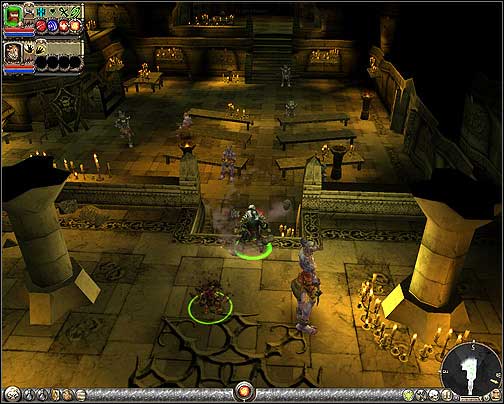 Go to the Vai'kesh camp [Western Vai'kesh Forest - 2]. Their leader Rinerel will tell you how his men found dead Elves in the forest. Only one managed to survive and he confirms Rinerel's words. The corpses are in a small tomb not far away. Vai'kesh leader tells you that they want to live in peace with Elves and only alliance with them can save the Vai'kesh from the powers of evil, which are coming from these forests. To confirm his words go check that tomb he was talking about [5]. Everything seems right, so go back to Talain and tell him about this. 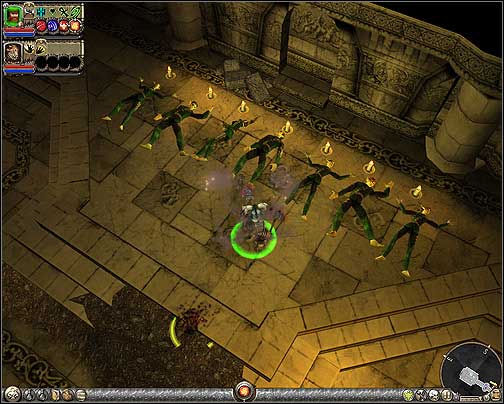 When you'll explore the Calennor Stronghold [10], you will discover a corpse with a Vai'kesh sword sticking out of it [2].

After you discover the corpse in the Calennor Stronghold, go back to Aman'lu and speak with Talain. He was suspecting that the tricky Vai'kesh prepares something. Go to the Vai'kesh camp [Western Vai'kesh Forest - 2] and speak with Rienerel. He's going to attack you. Kill him and enter the sanctuary. There are many Vai'kesh inside, so look out. Inside you'll find another Celeb'hels soulstone needed for the 2.2.2 quest [5]. At the end of the sanctuary kill the prophet and return to Talain. 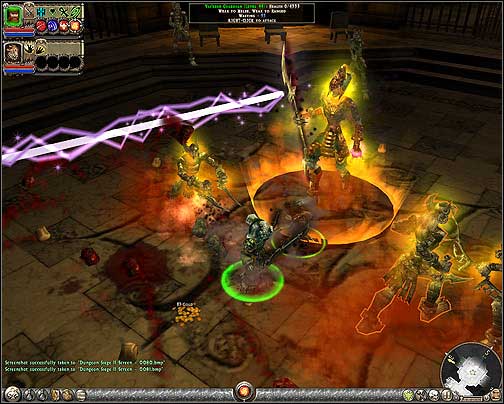 In the Vai'lutra Forest you'll encounter a strange tomb [11]. Inside you'll find a woman trapped in some sort of magic cage. To free her you must turn off all magic lights. This room is very simple but next are tricky, if not impossible to pass. The released woman will tell you her story.

The woman's name is Meraliss and she came here to search for legendary treasure, which was supposed to be buried in this tomb. She was caught into a magic prison while exploring the place. She doesn't want to seek the treasure anymore. But you can try. In the next room you'll find similar situation. Treelus caged by magic and a lights puzzle. The difficulty level is much higher (look at the solution in the Maps section). Free Treelus and kill him. Return to Meraliss. This will end this quest. You don't have to solve the two remaining puzzles in this tomb. But if you'll do it, there's a surprise waiting for you. 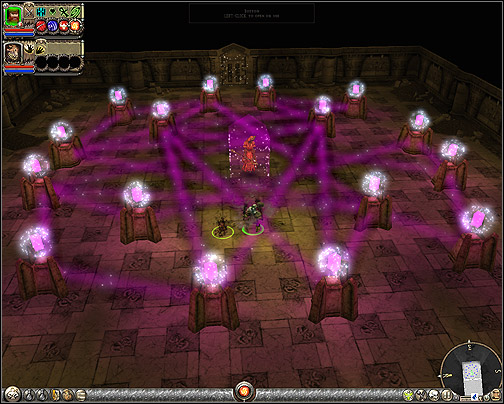 Hardest puzzle in The Vault of Therayne.
See/Add Comments
JOIN FOR UPDATES