In the Dryad Outpost you'll find Yoren, a Dwarf searching his relatives, who went 150 years ago for a search of legendary Glorydeep Mine. There's no sign of life from them. Yoren suspects that they found a treasure in Glorydeep Mine and don't want to share it with other Dwarves - this is the reason for not giving a sign of life. Yoren will give you a huge Glorydeep Ruby as a confirmation of his own words. He needs someone to help him search the Dwarves and mine or any clues, which may lead him to them.

This quest goes on really long. While exploring The Blasted Valley you'll encounter a cave, only one that is unblocked at the beginning of the game. This is Abandoned Mine [18], where you can find a clue about Yoren's quest. Return to the Dryad Outpost and speak with him. He wants to see this mine, so take him with you and go back to the Abandoned Mine [18]. The fastest way to get there is using teleport to The Blighted Hills - North [3] and then across the bridge. This time you'll be able to open hidden cache, [Abandoned Mine - 2] where you can find a book about the Glorydeep Mine [Abandoned Mine - 3]. This quest will continue in the last chapter of the game. In Glorydeep Enclave you'll find a Dwarf named Rockmover, [The Halls of the Overseers - 3] which knows something about the Glitterdelve family. Again, bring over Yoren and the quest will be finished. 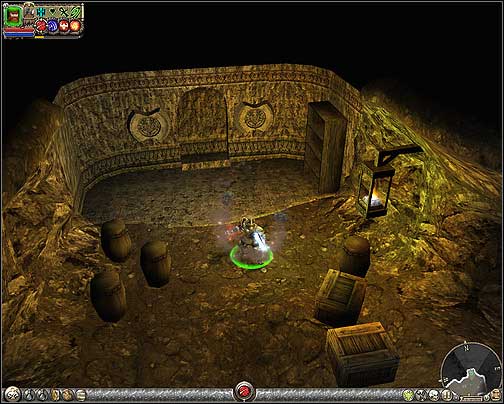 First clue leads to the Abandoned Mine.

In the Dryad Outpost find the man named Soram. He came to this camp with his child and wife Eliza seeking safety, but recently Eliza went to the forest to gather some fruits and didn't come back. Despaired Soram tried to look for help among Dryads, but they ignore him and don't allow to go outside the camp for searching.

Soram tells you that his wife went south from the outpost. He's frighten that the Dryads could refuse her to enter the outpost. In such situation she would go to a place called A Ruined Traveller's Sanctuary, where she could wait for help. The get there you must go to the Blasted Valley and find a cavern [10]. Inside you'll find entrance to the place you've been told about by Soram, but it's guarded (the password is given to you by Kirani at the beginning of the 1.1.3 quest - In Search of Celia). The problem is, that the sanctuary has been raided by some kind of demonic monsters and Eliza was changed into one of them! There's no other way than killing her. Take her locket and give it back to Soram. He won't believe you at all and will attack you. You can kill him or spare his life, your choice won't affect later game. 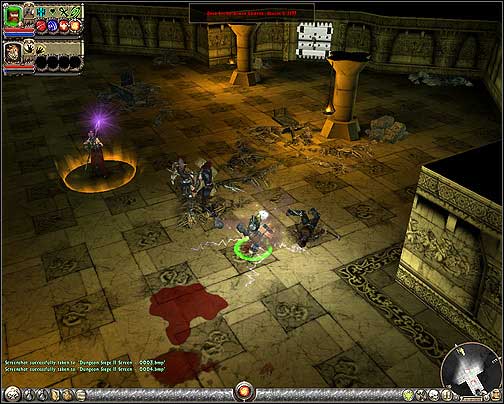 Eliza went to gather fruits and ended in place like this...

This quest is to introduce the basics of using reagent recipes. Enchantress Lumilla learned the art of using recipes and will share this knowledge with you. She needs some reagents to show you how this works. In reward you'll get a unique ring.

This quest is simple. You have to find needed reagents - here's, where they can be found:

Lumilla will reward you with this ring.

Ithara is studying strange creatures, which appeared lately in the forest. After seeing some species, she needs more samples to continue studies.

Getting all the samples won't be hard. While exploring new areas you'll fight with brand new species of monsters and the samples will be collected automatically after killing first monster from a specie. Itchara will reward you with unique armor and new task. 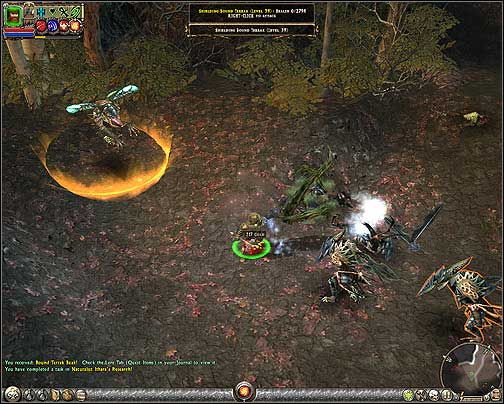 Right after you past the south gate of the Dryad outpost you'll meet Tomas, a merchant traveller. He's got problem with his business partner Anya. She's gone mad (just like Kandred...) and she started to kill. When Tomas tried to stop her, she managed to escape and steal his backpack. Without his backpack he's ruined, so he wants you to help him regain it. Near Tomas you'll find a lore book called "A Merchant's Travels".

This is side quest, which you can finish first. Anya can be found in the Blasted Valley [12]. Going there try to pick up reagents found on your route. You'll encounter two cave entrances[5 and 10], but they gonna be blocked with magic. When you'll be near Anya's camp, you'll see her from a small hill. Not far from this place is a mana bush [11] and teleporter [13], so you can prepare for a fight with Anya. She's easy enough to kill, but has minions along. After defeating her get A Leather-Bound Backpack and bring it back to Tomas. As reward he'll give you a recipe. After this quest Tomas will transform into normal merchant. 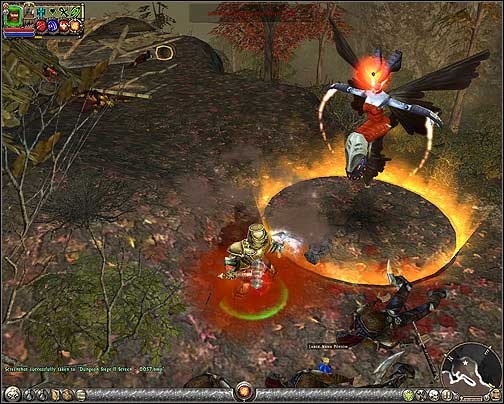 While exploring the cave in the Blasted Valley area, [7] you'll find a strange looking book [A Dark Cave - 3]. You can fell the magic emanating from it, but unfortunately you can't read the words written on its pages.

In this quest you'll need help from Nari [The Dryad Outpost - 8]. Show her the ancient tome, and she will tell you that this book is used to summon the legendary spirit of Nymphara. Nari thinks that summoning this spirit could be helpful in solving the mystery of murdered Arisu, which was killed recently. Nari have read from the book, that she will need a few strange ingredients. You'll have to get:

When you'll collect all the items, Nari will be able to summon the ghost of Arisu with help of Nymphara. Talk to Arisu and you will be rewarded. 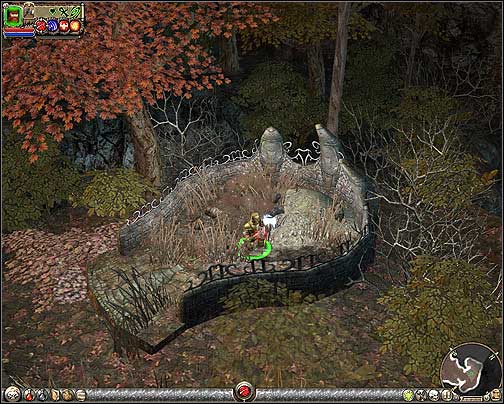 During your journey through the Kelvaran Waste - West you'll encounter a small Morden camp [6]. They look really pathetic and weak. Their leader, Lorksul, tells you that some strange kind of plague is responsible for their condition. It weakens their powers and minds. But not every Morden are dying, there's a group called Ravagers. They are strong at cost of being Overmage's servants. They often attack the remains of Lorksul's camp, the consequence is that dying Morden can't go out the camp for some food. You'll be asked to bring some food. To finish this quest you'll have to complete the 1.2.8 quest first. 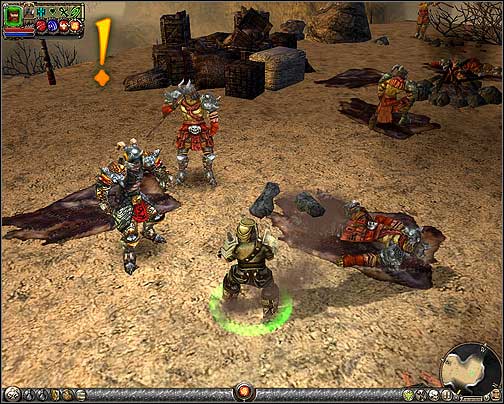 Return to the Dryad Outpost and speak with Quatermaster Olara (she's near the Ithara's place). Because the Dryads do not sympathize with the Morden, you'll be given a pack of food with a poisoned addition. Go back to Lorksul [The Kelvaran Waste - West - 6] and give him the food pack. Decision about giving him the poison doesn't have any influence on the later game. When Lorksul gets the food, he will tell you a story about a vial of Overmage's blood. He suspects that Morden Ravagers get their strength from it. He wants to get this vial to summon projection of Overmage and ask him a few questions about the plague. Bring it to him (it's a 1.2.8 quest). The projection will tell Lorksul that the Mordens are doomed and there is no way to change this back. In reward you'll get a Berserker Shield and Bone Helm Recipe.

The Ravagers faction you've been told about keeps their powers for loyalty to Overmage. Their skin is pale white and they have to carry sign of the Overmage on their bodies. Lorksul thinks that the vial of blood is the source of their power. If someone could take it away from them, they'll be doomed like the other Morden and Lorksul could speak with projection of the Overmage. This quest is required for 1.2.7 Morden Redemption.

The Morden Ravagers camp is in The Kelvaran Waste - Central [13]. Before entering there you can quickly take something from [11] and [12]. In Morden camp search over buildings, you can find there some reagents [14 and 15] and a chest [16]. Vial of blood can be found at the end of this map, it's guarded by strong group of Morden Ravagers. When you get it, you're back in the 1.2.7 quest. 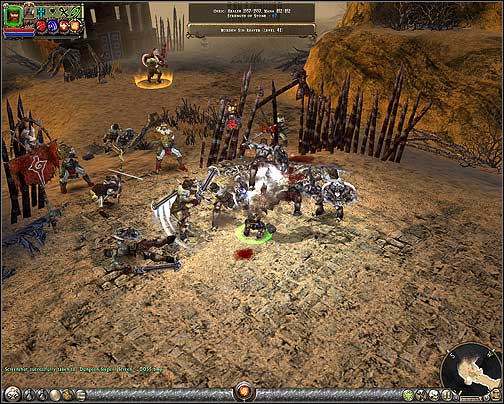 Morden Ravagers are not really pleased with your presence.

Just after you'll enter The Kelvaran Waste, you'll meet Jorena [3]. She's trying to hunt down gigantic, wolf-like beast, which appeared in this region. The beast is not only huge, but also can talk. It has told Jorena that this region is very suitable for living and wants to settle here. She is scared with the plans of the beast. You'll have to help her getting rid of it.

Jorena have prepared some trap for the beast. To find Greylok, you'll have to go to The Kelvaran Waste - East [2]. Leave the trap in front of the cave and wait for the beast. Kill it and take Greylok's Skin. Return to Jorena and give her the skin. You'll be rewarded with Greylok Skin Gloves.

Reward for killing the beast.

In Arinth's Heights - Upper you'll find Watcher Rena [1]. She warns you before entering further into canyon and tells a story about massacred refugee camp. Her Dryad sisters are gone mad and started to kill everyone in the camp. She's too weak to handle this, but maybe you can go there and see what's happening there.

The canyon is right behind Rena. When you'll enter the refugee camp, [2] you'll see a real massacre. Bounded Dryads are killing everything in their sight. You can't help them, so kill them. Follow the blood marks on the ground and you'll find a living man at the end of the road [3]. Jarden will tell you, what happened here. After that return to Rena and speak with her. 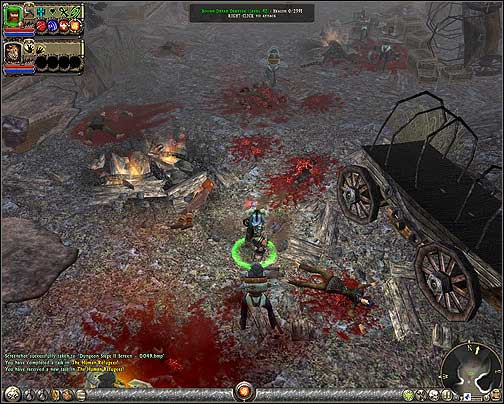 Remains of the refugee camp.