#1a - Find the Spirit of the Drake

#1b - Complete the Trial of Strength

#1c - Complete the Trial of Wits

#3a - Slay the Minotaurs

#3b - Retrieve the Navigation Tool

#4a - Destroy the Illithid Portal

As it turns out, our efforts on purposing defense of the Heart of Siberys against invaders may be assisted by mythical beasts - Fire Drakes. However we have to wake them up, showing both with physical and spiritual strength.

We go down to Khyber through the passage being located closest to our base. It turns out that these locations are adopted as headquarters by a group of minotaurs who amassed huge wealth. Our task is to kill them #1 and to recover treasures back. There will be heavy fights (Minotaur lord in it), after which we return to the surface and we proceed to the north to the next entrance to Khyber. 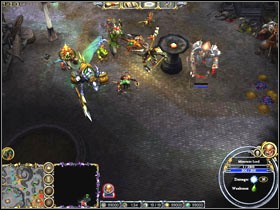 Defeating units of Thri-kreen which attack us en route, we reach entrance to Khyber. There is Guardian of Strength waiting for us in underground who wants us to prove our #1a strength. We have to enter the chamber visible to the north and fight successively with the Medusa, Frost Beast and Beholder lord. Defeating them assures the guard, that you are the suitable person for waking up of dragons - you receive the half of Spirit of the Drake. Now it is time to get the other half, however this is quite complicated task.

We move towards the map center. Close by entrance under the surface there is a group of Nomads, who unfortunately can't leave these inhospitable areas since their way is occupied by minotaurs and additionally Thri-kreen have stolen their navigational tools. We are being asked for #3 help. We move to the north-west direction reaching minotaurs whom we defeat after longer (or shorter) #3a fight. Then we make for the north-east where the village of Thri-kreen is located. Destruction of their armies and the Barrow building leads to gain searched Navigation Tool #3b. We return to Nomads who open the passage to Khyber for us. 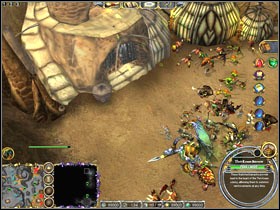 After leaving down we move westward and encounter Mind Flayer after a while. After the short fight, we reach the shut gate. To the left we can see two levers and to the right there is a board containing instructions how to open the door. Combination which open the gate it is left, right, left, right. After passing through we meet Yuan-Ti Elder who informs us that these chambers are run by Illithid #4 forces which grew magic portal and calls us for help. We will receive the chance to go through the Yuan-Ti territory in exchange for it. We move to the north where according to words for of interlocutor the portal is being found. We can see small forces of Yuan-Ti fighting against Mind Flayers. We have to destroy the #4a portal eliminating Mind Flayers showing up continuously (if we manage to save all Yuan-Ti we will receive the extra gratuity). Then we return to Yuan-Ti Elder #4b who presents us he key to the gate being located on the west and offers help of his people. 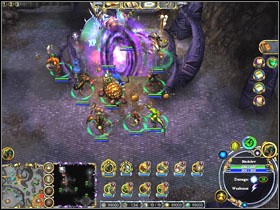 We proceed to westward, towards the gate which we open using the received key. The corridor full of traps is leads us for Guardian of Wits who wishes to test our #1c wisdom. We enter the chamber close by. We can see three boards with instructions which explain what should be putted on tables behind them. We can see these objects on tables on the right-hand side. Order of putting them is as follows Spear, Club and Fang. We return to the guard and we receive the other half of Spirit of the Drake #1 who is connected with other half (we receive the #2 additional gratuity for the solution to the mystery of opening the gate and just ended attempt). We leave to the surface and we make for the plateau on the north where we enliven Fire Drakes #1d. Only the one problem is left already - Umbragen.

Base of Dark Elves is being located on the south-west. We are able to attack it at the same time from air and through undergrounds. The attack assisted with new confederates is ending the Umbragen existence in this chapter. 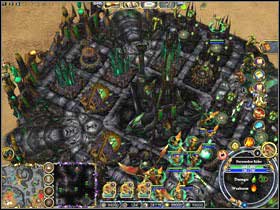 Tip - we can find the mausoleum on the north of undergrounds guarded by zombie and an Efreet jailed in the bottle. We can free him casting the Dispel Magic on bottle but prepare yourselves for the fight - he lied to us saying he will endow us with wealth. 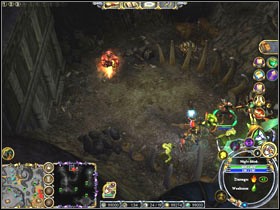