After many decades of the lonely life in peace, Lizardfolk tribes have to close together and turn up for armies which invaded their land. As it turns out, Lizardfolk are legitimate guards of Heart of Siberys and from ages they fought against all who were quite powerful to cross the Ring of Storms. During the meeting of leaders of all tribes, Silverblade appears. He informs us about the attack on the village. He also calls for help in fighting off that #1 attack, as warriors are few in the village. And we enter the game at this moment.

We proceed to the north-west after the Champion choice, with only possible way. We meet two warriors accusing each other for killing one from members of the elder of the tribe. It follows from the prompt that the true killer hid in one of visible #1 baskets (attention, there probably is a bug resulting that baskets are empty so we have to try the mission one more time). After unraveling the mystery we move further on, reaching the bridge, which the archer hid at. It turns out that the bridge is being guarded by Humans, whom the archer escaped - we attack them recovering the control of the #2 bridge. Unfortunately, the next bridge is unavailable for the time being so the only way left for us is through undergrounds.

After went down we meet Night Skinks who call #3 for help fighting against enemy. After the fight we move east reaching the board with the ancient text in the language of elves. Such text may be read only by Night Skinks or also by the wizard, e.g. Blackclaw. We receive the next task - unraveling the secret of the crypt of the #4 mummy. In order to set oneself against her it is necessary to read the message one more time - hostile undead will show up then. After fight we return to the main corridor and we make for the south and then with way westward. The road is filled with undead minotaurs. We reach the chamber ruled by Grave Keeper - there is also a container which is able to enliven dead creature. We proceed to the eastern direction. 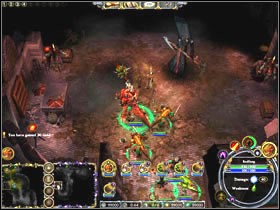 We reach the Tribal Shamans group who defend the Darroc's temple. Unfortunately, thieves have stolen eyes of the statue and of course we have to recover them back #5. Thief of the right eye escaped to the north from where shamans heard some voices, so we go in that #5a direction. After a while we overtake the thief who was found in the impasse. However he entered on some board which caused activating crypt with undead. Following thief's steps, we press the board and we kill undeads. When we put all to death we will receive the #6 gratuity (for killing all Zombie, Mummies and Undead Minotaurs in undergrounds). We move for the left eye which is being located, according to shamans, on the south, guarded by minotaurs #5b. Scouring southern corridors we are able to come across the Minotaur Monument. Killing all met minotaurs will result in gaining the extra #7 gratuity. Now we have only to take won eyes back to shamans after which we will gain the control on Shrine of Darroc. After fulfilling civil duties we are leaving for the surface with passage on the east.

Here after the short struggle, we support warriors in the village and we fight off #1 humans attack. 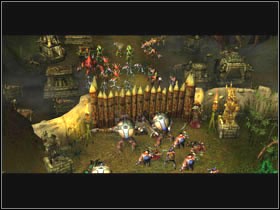