In this section we will focus on introducing you to the House Atreides faction in Dune Spice Wars. You will learn what their strengths and weaknesses are and what sort of victory options are the easiest for them. Also, we have prepared an overview of their units, faction bonuses and councilors.

The Atreides are a relatively peaceful faction - they prefer to stick to alliances and cooperation rather than engage in a direct offensive. The faction gets most of its profits and goals by doing politics. They have a high proportion of Influence and Votes, which gives them a high Rank in Landsraad Standing. They can easily obtain Charters in Landsraad. The Atreides don't stand out from other factions - their main focus is on defense and politics.

The Atreides are a faction that may have problems at the beginning of gameplay, but they do perform pretty well later in the game. Initially, you can try to speed up the game by using strong political power (Votes and Influence).

A good idea to start playing as Atreides is to take full advantage of two features: strong defense and faction skills : Peaceful Annexation . Why? This way, you can take over any regions on the map - even those where your troops would not reach. This will allow you to create another front, but also to take over the most valuable resource deposits and special regions (which can often pay off, even if you were to lose them later). However, with a high level of defense and the use of Air Fields, creating a dispersed structure will not be so problematic.

In addition: the faction can benefit heavily from Special Regions. This way, you can also control the largest Spice fields and amass large supplies. Additionally, the use of treaties ( Open Borders Agreement and Military Pressure ) may partially dissuade other factions from attacking you - they will then lose their Landsraad Position (not applicable to Fremen).

House Atreides has the following bonuses:

House of Atreides has the following Councilors to choose from: 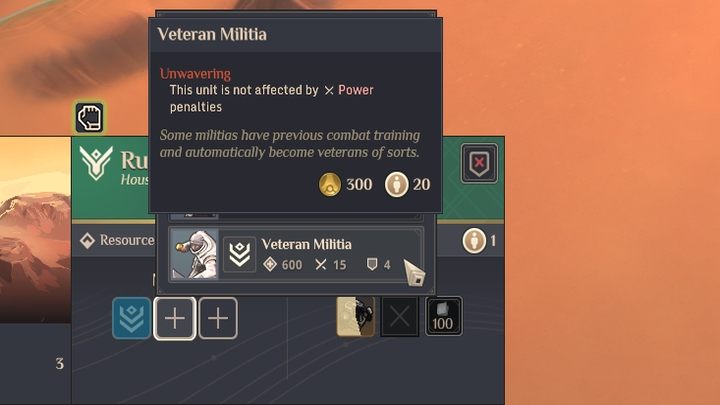 Veteran Militia units are close to a good military unit.

Below is a list of available Atreides military units that you can recruit, along with a description of their characteristics:

An aerial unit that can become the target of the enemy. Heals but also attacks. Drones are as slow as infantry units, but they ignore uneven terrain (can fly over rocks) and have large supplies. Features:

It has the highest stats of all units, but the lack of bonuses and high maintenance costs will not encourage you to use them in larger amounts. Features:

A unique militia unit that deserves a mention here. Features: