In this section you can find out how the voting and politics system works in Dune Spice Wars. We explain what is the Landsraad, what are the Charters, how to pass Resolutions and use Votes and Influence.

None of the Arrakis factions is independent: they are all under the reach and rule of the Empire. Hence the political gathering - Landsraad, which gathers monthly to vote on bills. All factions take part in these votings, but also the inhabitants of the planet, who have the overwhelming majority of votes (400). Each faction may or may not vote for one or more resolutions, which are announced before the vote. The Landsraad window gets unlocked after the first month of the game.

What are the Resolutions and how to vote? 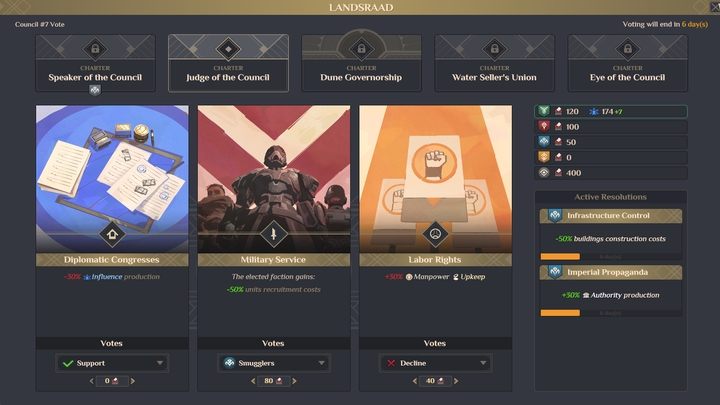 Resolutions have two forms: they can be positive (e.g. cost reduction) or negative (such as reduced production efficiency), but can also affect one faction (choose which one) or all (choose or vote for or against). Each adopted resolution is irrevocable and lasts a certain period of time - until the next vote. You will be informed by a message about the topics of the meeting before they start (gray icon). As soon as it is possible to vote, the information icon will turn green. The voting takes place as follows:

Influence also serves as a trading currency. However, don't be surprised when someone uses the votes you have bought against you.

It's good to know that three factions - apart from the Atreides - can also influence voting in other ways. However, you have to do it before voting (after the announcement of bills - gray icon in the notifications window). Faction Skills which have an impact on Voting: 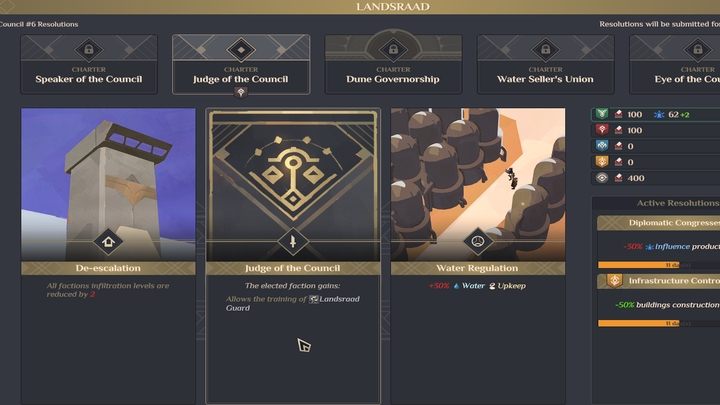 What are the Charters: