In this section you can learn all about Espionage and Infiltrations in Dune Spice Wars . We explain the basics of Espionage and key rules of assigning tasks to Agents. Furthermore, you will learn what are the benefits of Counterintelligence, how to obtain information about enemy factions and commission missions or assassinations.

Assigning tasks to Agents and the Espionage panel 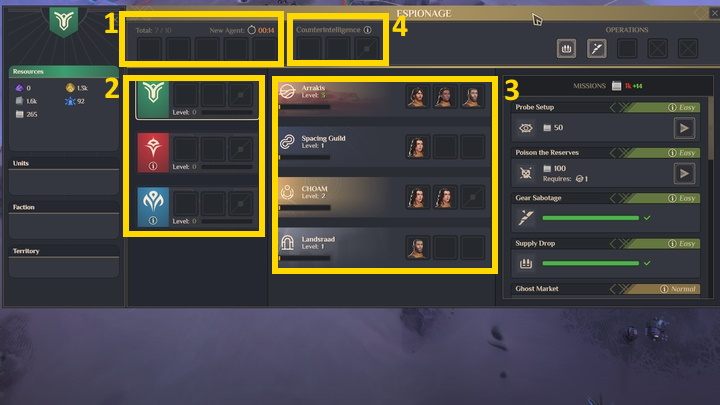 Espionage is one of the very important functions in the game. All factions have access to it, after the first few minutes of the game, when the first Agent is recruited (subsequent agents will be recruited at specified intervals up to the set limit - 10 Agents by default). Then you can open the appropriate window (magnifying glass icon) where you can see the free agents (1) and after selecting them, you can assign them one of the specified functions:

There are 4 organizations that can be infiltrated. Each of them has 3 levels, but to unlock them, you need the right research from the Espionage tree - different for each organization. Hence, it is worth planning in advance where you will want to place your spies as a priority. The categories are:

Depending on the faction and available research, you can often increase the efficiency of your agents working on specific tasks.

You can move an agent between tasks by simply selecting him from the assigned mission and clicking on the "lobby". From here, you can move him to another quest or assign him as an emissary to form an alliance with the Sietch. 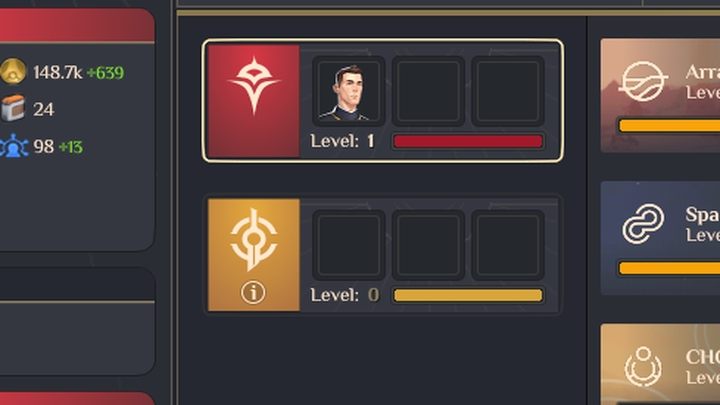 Each activity has a Level. Progress is shown as a yellow bar. However, you will not reach the second level if you do not assign a second agent to the same job. Also, the level does not vanish - if you remove an agent from infiltration of the second level, then the level will drop to 1, but as soon as you bring him back to this position, you will regain level 2 very quickly. Similarly, upon reaching level 1 and transferring your agent to another job, you will return to level 0 with an almost full progress bar. It is a good idea to prepare the infiltration of other sectors this way, when you do not have a full set of agents yet . 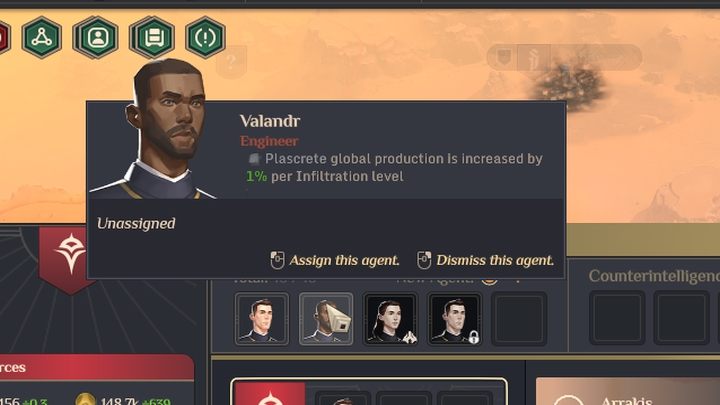 Additionally, each Agent has a Characteristic . These are the minimal bonuses they provide, so properly matching them to specific tasks is important for some traits. However, this is an element of micromanagement that is often neglected. 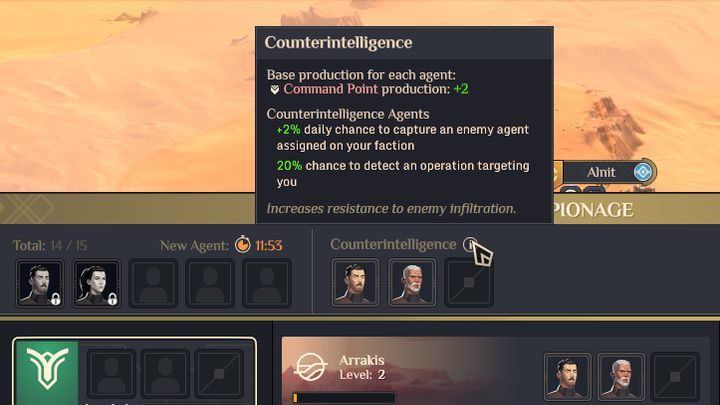 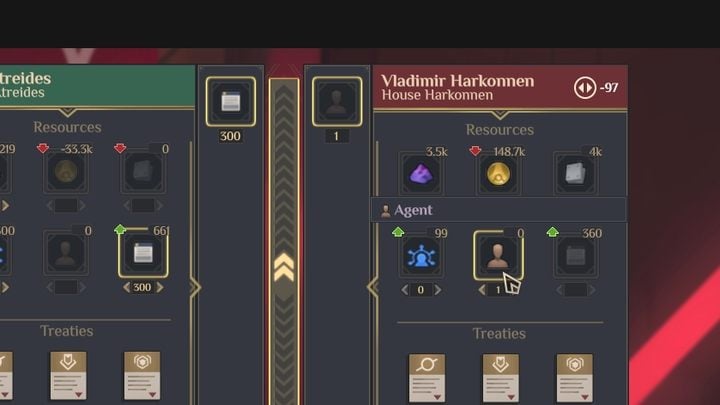 If you capture an enemy agent or your agent is being captured, anyone can buy them back by sending the opponent an appropriate buyout offer - it will be visible as one of the transaction options in the faction that has your agent. However, buying an agent is usually expensive . After a while, the trapped agent may escape on his own, so consider a buyout offer or offer your opponent a release fee yourself. 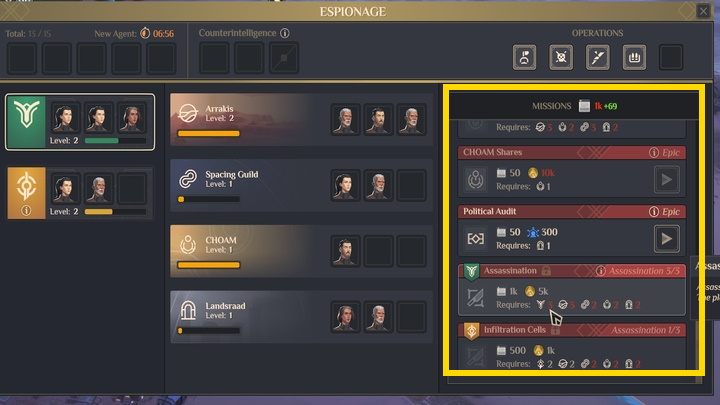 The second of the main reasons for assigning agents to infiltrate an institution, in addition to gaining resources, is the ability to complete missions. You can see them on the right side of the Espionage window screen. Completed missions turn into operations that you can launch at any time, while the mission additionally requires a preparation. 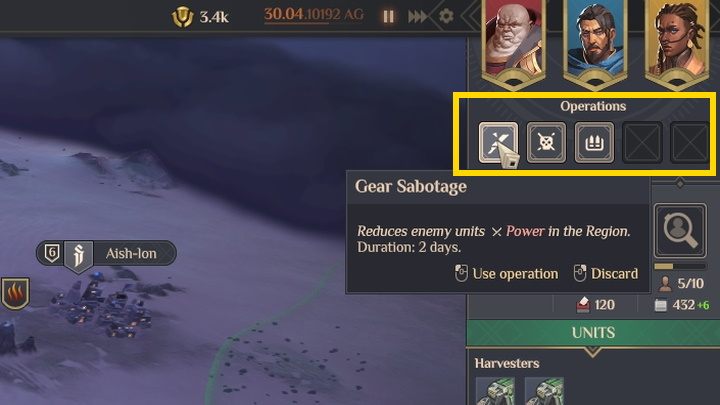 When you want to use a specific operation, you can select it from the right panel under the faction leader icons. By default, you can only prepare 3 missions to use as operations . {ramkiembieska}To unlock the next 2 slots, you need to unlock the second level of research (Espionage): Spy Logistics and then construct a building in your base: Intelligence Agency . {/ramkiembieska}

A perimeter of a certain color and a descriptive indication tell you how difficult the mission is. There is a chance that your mission will fail and your agent will be taken prisoner before its completion. The table below will tell you what the chances are ( in percent ) that something bad may happen when you try to complete the task:

The detection of an operation (meaning the enemy will know who performed the operation) and the chance of being captured relate only to the target faction. You will not be informed about the actions of other factions among themselves and they will not affect your operations. This fact concerns basic levels, and Counterintelligence increases the chance of failure. Complications, on the other hand, take the form of a window in which you have to decide whether to sacrifice resources for the mission to succeed or to avoid capturing an agent.

In other words: the more difficult the mission and the higher the level of enemy counterintelligence, the greater the chance of detection, meaning your agent will always be intercepted.

Spying on other factions 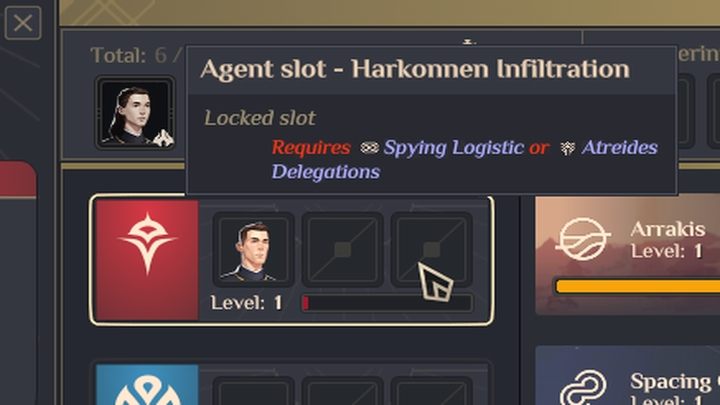 You can spy on other factions. At low levels, you will mainly need the income of 5 Intel from this.

You need to do two independent researches to unlock both slots and be able to research on level 3. Missions other than Assassination do not require infiltration of other factions.