In this chapter of our guide we explain how to win a game in Dune Spice Wars. You will learn each of the three possible gameplay options that can lead to victory: through Hegemony, Domination and Politics. We explain which factions are best suited for achieving victory by a certain option. 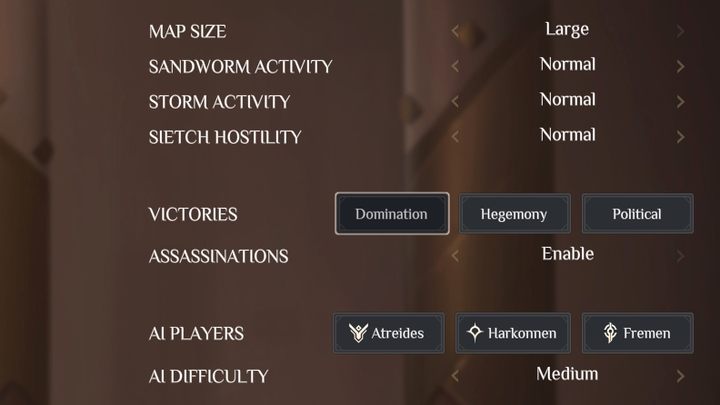 There are three forms of victory in Dune Spice Wars :

You can turn off the Hegemony and Politics options in the gameplay options before launching the game by opening Gameplay Settings. You can also disable the Assassination option, which allows you to kill the leader of another faction after meeting certain conditions.

Domination - destroying the enemy base

Winning by elimination may seem like a fairly natural procedure, but it will not be an easy achievement for everyone. However, it can be achieved in two ways.After eliminating an enemy faction, you claim some of its resources, but not its regions. 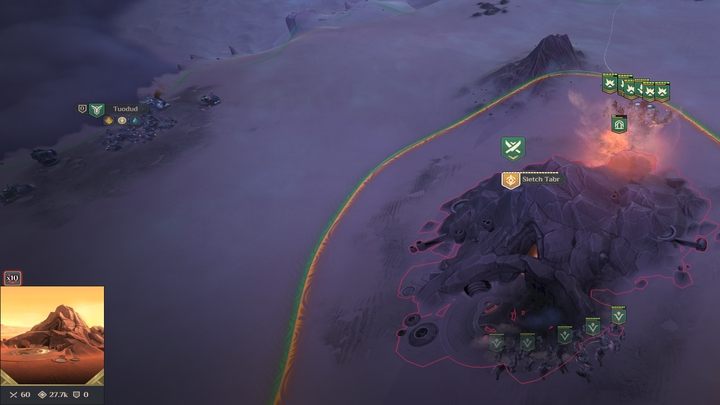 The first method is to physically destroy the enemy base. It is difficult because you will spend a moment destroying the building, and during this time the enemy will not let you breathe. Therefore, it is worth to think it over and rather use this type of offensive with a significant military advantage or after leading the enemy to the brink of bankruptcy.

For this type of attack, use large amounts of units with explosive ammunition, which will decrease the building's armor. Their treatment will also be important. 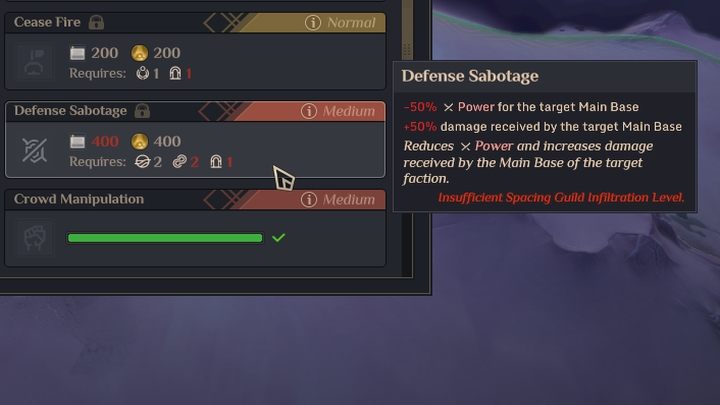 Additionally, it is worth using operations and infiltrations, especially Defense Sabotage . Use it in a particular region with an enemy base to make your units take less damage and the enemy base to take 50% more damage. An additional operation is an atomic bomb - a nuclear bomb will kill everyone in the region, and the base will receive approx. 4k of damage (up to 6 with Defense Sabotage).

Keep in mind that attacking an enemy Base will cost you your position in Landsraad. You will lose 10 points for the attack itself. If you fail, you will lose more points. For defeating the enemy by destroying the base, you will receive approx. -50 points. 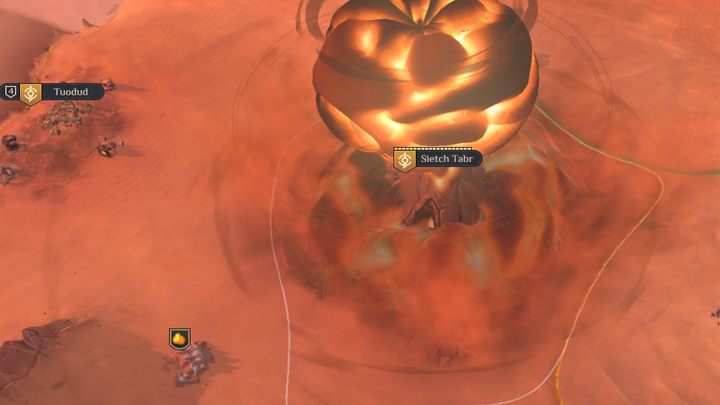 The atomic bomb is one of the agents' operations that will lower your Landsraad Standing.

If you are lucky, you can also use the Architectural Surveys resolution to make the enemy base unable to attack and take twice as much damage for the duration of the resolution. 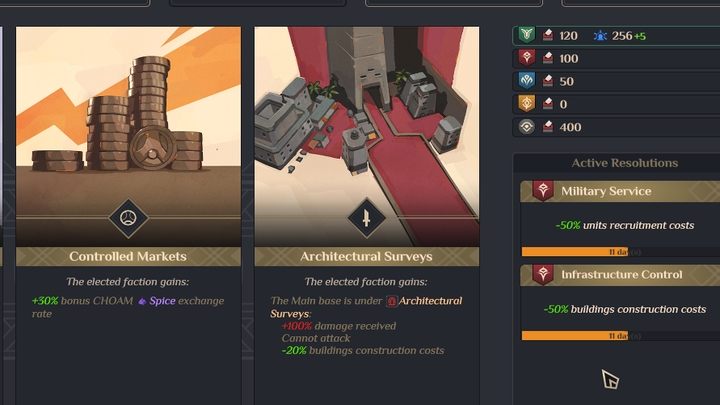 This type of victory is aimed mainly at the Harkonnen faction and, optionally, the Fremen . 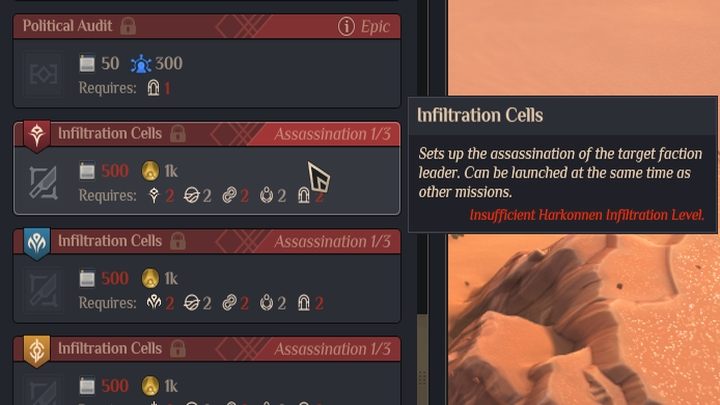 The second option is intended for people who have turned a bit towards the development of Espionage. The game allows you to eliminate a faction by killing its leader. There are a number of requirements to be met in order to do so; in addition, a well-oriented opponent may be aware of such an action and will invest in Counterintelligence , which may jeopardize an attempted assassination.

The Smugglers and the Harkonnen will do just fine here.

The faction with 30,000 Hegemony points wins. 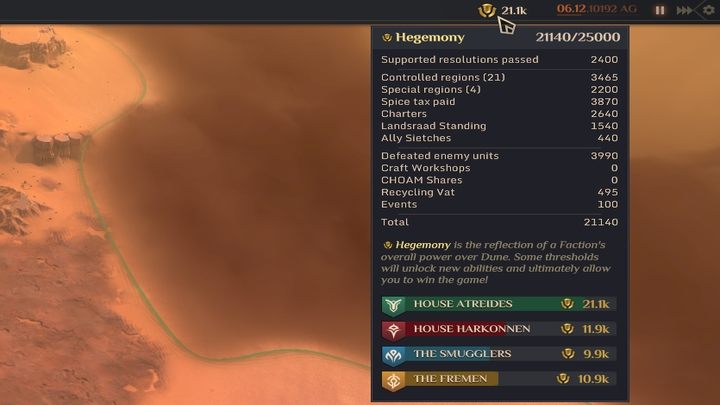 Victory by points. This is the most basic form of victory in which each faction has a relatively equal chance. Because Hegemony points are awarded for a variety of actions and activities: for example, the Atreides family will earn a lot of points for their Statutes, and the Harkonnen will earn a lot of points for eliminating enemy units. In addition, each faction has a unique attribute that accounts for a large part of points, which is the first item on the list. They are as follows:

In addition, each faction gets the same scoring options, which can also be maximized or rewarded differently through the appropriate research available for the faction. After all, this form of victory is aimed at Smugglers and Fremen.

It should be remembered that many minor factors affecting the number of points. Hegemony can be withdrawn - for example, when you lose controlled villages or Statutes in Landsraad. 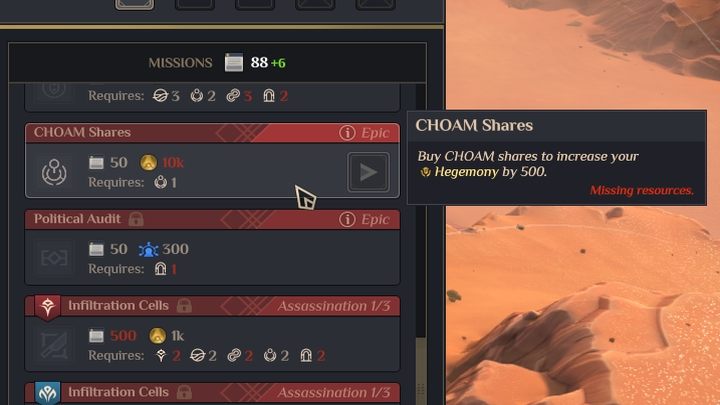 You can increase hegemony in many ways. The standard method available to all factions is to buy KHOAM shares (operation that is quite expensive - 10k Solari). They will stay with you until the end of the game. 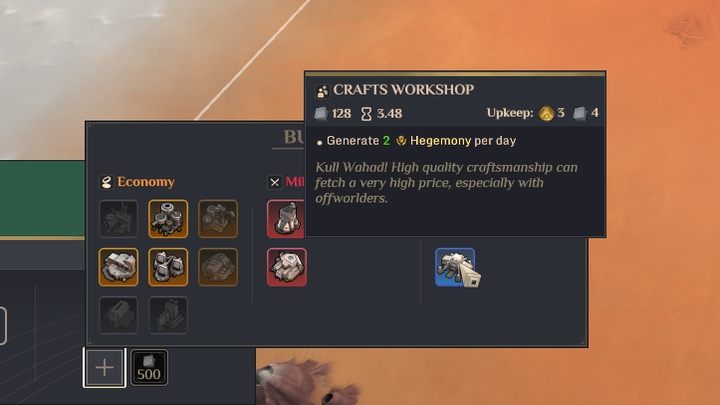 Another option to generate large amounts of Hegemony over time is to build Crafts Workshops in the villages, which generate 5 points every minute.

The faction that becomes Dune's Governorate for 60 days wins. 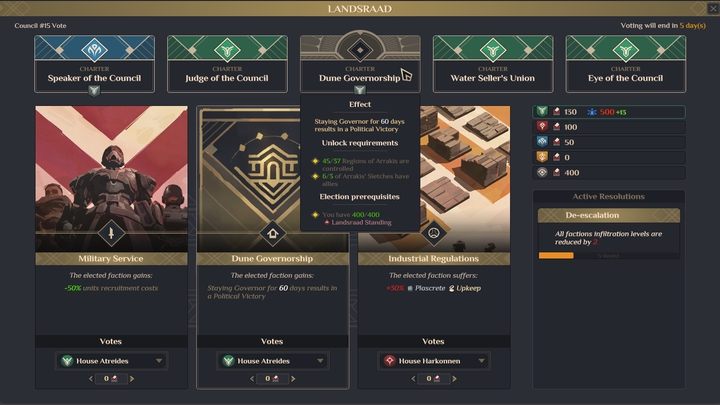 This is a relatively difficult task to win through the Dune Governorate . The easiest way to achieve this is in case of the Atreides faction, which doesn't mean that other factions can't. There are two important factors here:

The requirements are given for the entire planet - that is, each faction influences when a resolution becomes available. However, the second requirement - Landsraad Standing is an individual parameter, therefore not everyone will be able to submit their candidacy. Once Dune Governorate is available for vote, all you need to do is get a majority to receive the Statute. Therefore, Influence points may turn out to be crucial for a player who wants to assume this role. 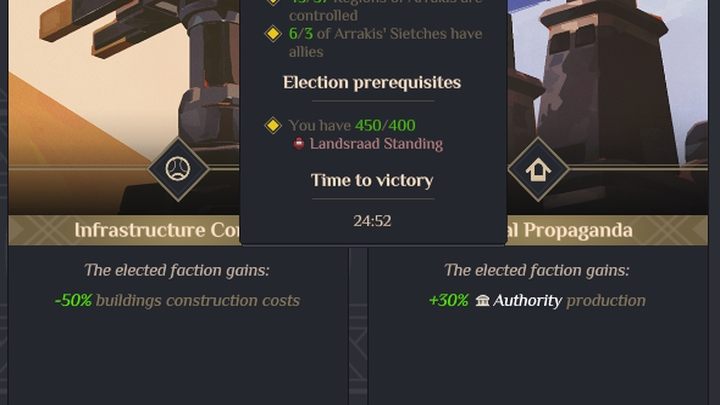 When you take your seat, you will see a timer counting down 60 days = 30 minutes. When it reaches zero, the player automatically wins.

Note - due to the fact that the map is generated differently each time and has a different number of regions, the basic requirements of the Dune Governorship statute will differ from game to game. 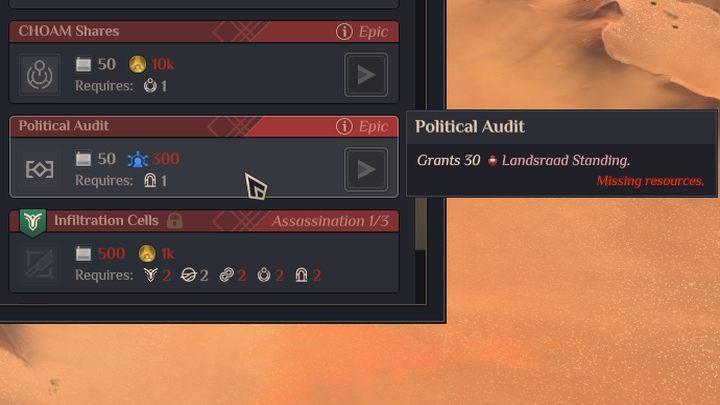 Factions have the Political Audit operation, which allows them to gain 30 Landsraad Standing points by paying them up with Influence points.