In this chapter you can find some useful Dune Spice Wars video game tips. Among other things, you will find out how to carry out an effective offensive and defensive, how to use the potential of the Ornithopter, and how to Conquer or Pillage villages.

Your starting resources allow you to take over two villages . In first one build a Plascrete Factory and a Windtrap in the other one (where the Wind Strength is higher). You must also have a Refinery that allows you to harvest the Spice.

The official time unit used in the game are days - even the game saves are being based on the amount of days. The same goes for research or the pace of recruiting troops. 1 day is equal to approximately 30 seconds (default game pace). 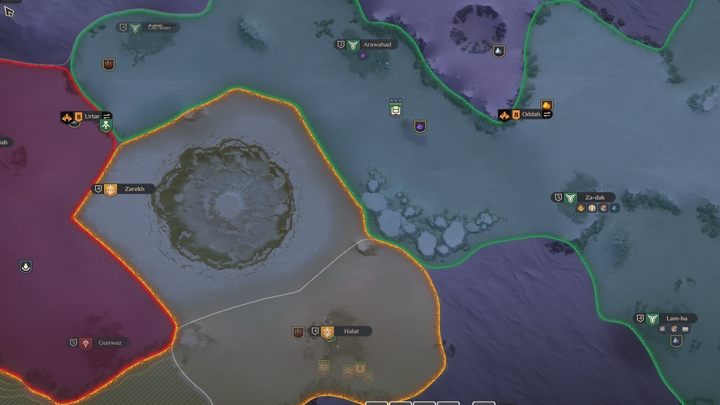 Make use of the time freeze and the tactical view - this way you will learn much more about what is happening in your neighborhood - also about a gathering of enemy units which may be ready for the offensive.

Control your Resources - If you see any red numbers indicating a drop in income, check what options you have to construct buildings or find other sources of funding. 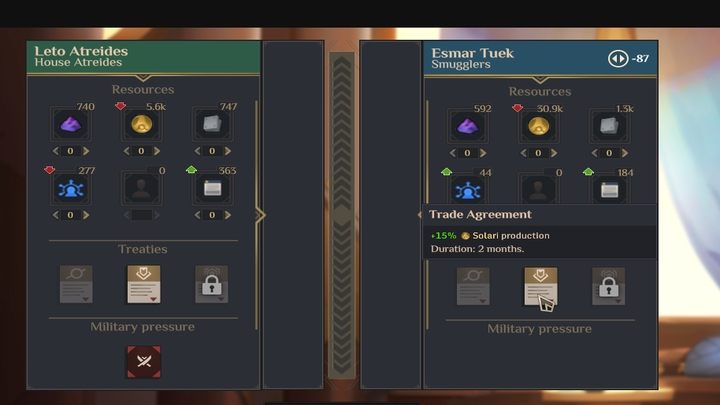 Take advantage of treaties - they work on the basis of mutual benefit, but at the cost of 1 point of Authority per treaty. You can sign as many of them as you want (but one kind and one type per faction). This way you will increase the production of Solari or speed up the research (up to 45%) . Additionally, each faction entering into a treaty with Atreides does not lose a -1 Authority point . Every treaty lasts up to 2 months.

Don't let your units die - especially due to Sandworms. The cost of recruiting an army is high, especially when it comes to Workforce units. When the situation gets rough then move troops to the village in order to let them recover. 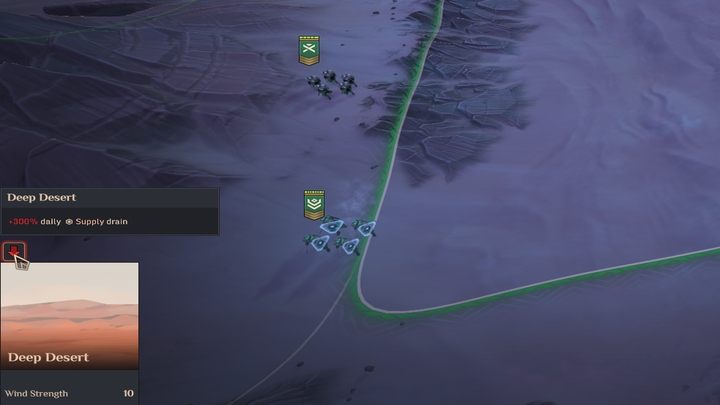 Watch out for the deserts - your units do not always move "intelligently" and instead of wandering around the border of the region, they take shortcuts in the middle of the Desert. There, however, the consumption of supplies is increased 3x and can lead to a quick annihilation of troops.

You can only build one building of each type in each village. However, this rule does not occur in the case of Rocket Batteries that can be build two times.

At the beginning, use the Ornithopter not only to discover interesting places, but also to get to know the general outline of the area. This way, you will plan the layout of the base in a better way - especially the locations for the Landing Pads or Repair Center.

You can take over, pillage and liberate villages - apart from capturing villages, you have some other options. When your army is awaiting orders, attack an enemy or neutral city to get resources by Pillaging. No one can perform similar operations for a short time on a pillaged village. The liberation of the village from the hand of hostile forces ensures that the enemy buildings will disappear. After that, the Militia made up of local settlers will be established.

A looted town does not lose any buildings. Production is reduced by 50% in this village. The cost of annexation after pillaging will be 5% higher at this point.

Taking over a village requires Power and Water - after all, you usually want as many of them as possible. This is because it allows you for the next generation of resources. 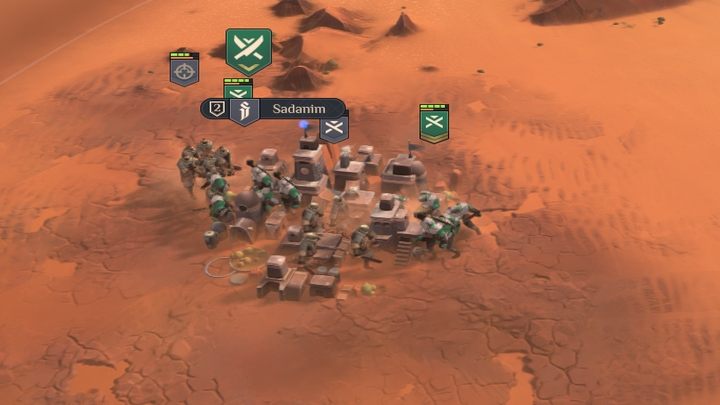 Set up your units - regardless of whether you are attacking a neutral village or one belonging to a faction, start the attack only after you've placed your units around the city / village. Militia units inside will not come out until the city becomes attacked. If you send units to attack immediately, the enemy will leave the city earlier and may have a tactical advantage, especially if you have ranged units.

Always try to keep your units in the city zone - they receive resources there (also in a besieged city) and if the village is yours, they also get their HP recovered. While standing in sandy areas, you risk being attacked by the Sandworms. 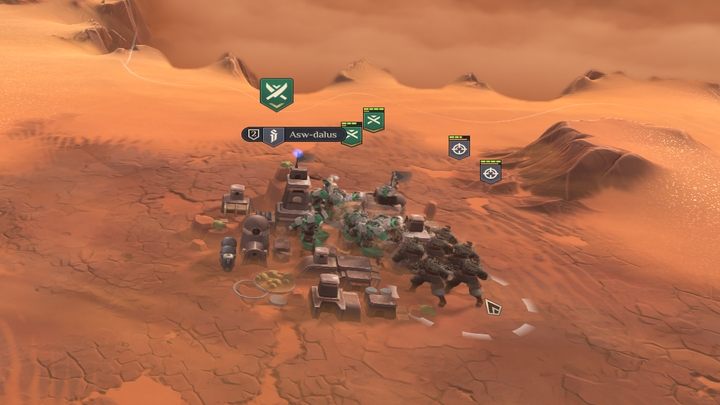 Take control over your combat units - despite the fact that the game is mostly about resource management and army movement, units fight each other directly and controlling them during the battle can be crucial many times. Attack ranged units first (if possible) - they usually deal the most damage, but are ineffective in melee combat. In addition, try to defeat one of the enemy units as quickly as possible, because they do not lose their combat effectiveness with taking damage over time. 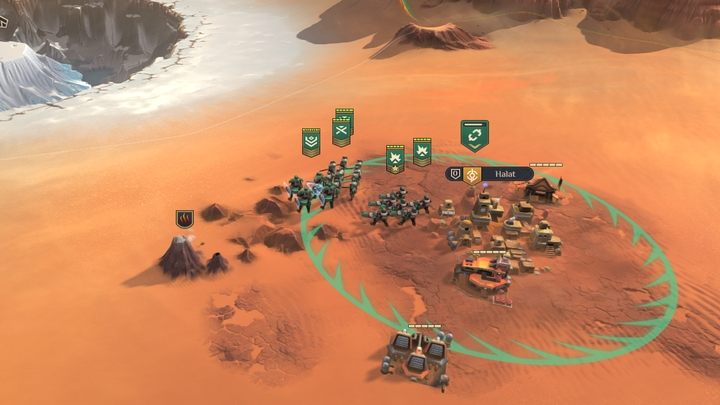 Operations in villages are effective as long as there is only one army there - various methods of defense against the offensive on villages are available. You can try to Case Fire or Poison the Reserves, but both will have no effect if the enemy is within the target city and there are no enemy units there. 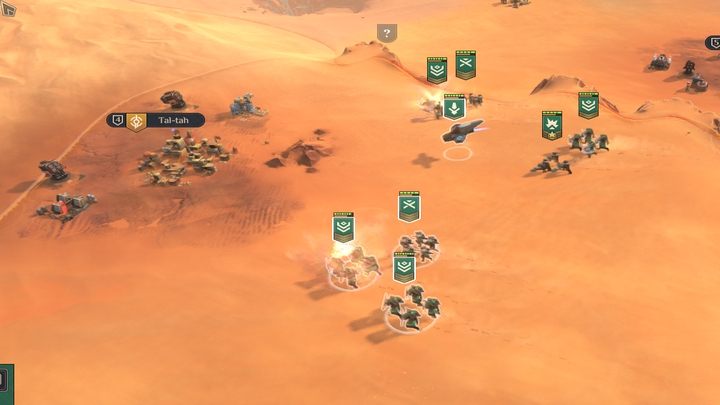 It is a good idea to lead units in small groups - it protects you better against the Sandworm's attacks and against area of effect damage (AoE damage) from Rocket Batteries or enemy units with AoE damage. 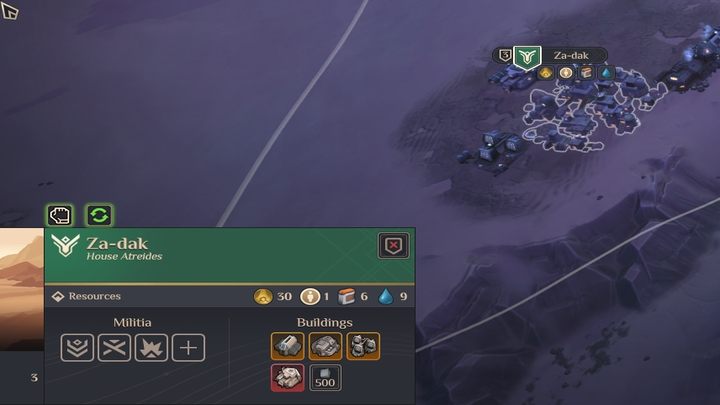 The basic rule of defense is to properly use the militia - cheap units that use little manpower or Solari. It is worth having at least one squad in each village, as you never know where the rebel bases are and you can be attacked from almost anywhere.

Landing Sites and Batteries - two key buildings that give you a strategic advantage when defending. Both buildings, however, have high maintenance costs, so their arrangement should be well thought out. 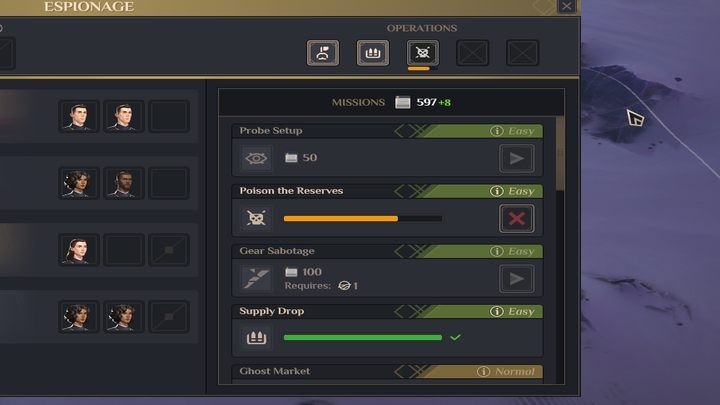 The actions of agents are a great defense mechanism - by observing the movements of troops, you can use the Poison the Reserves operation earlier, thanks to which enemy units will often be forced to retreat. You might as well use the Suspension of Arms to prevent your opponent from fighting in the area.

Use free Ornithopters - they can inform you in advance about the movements and gathering of troops, reveal the area obscured by fog and detect hidden units - giving you an overview of the real size of the enemy army (or, for example, revealing an attempt of your enemy to encircle your troops).

After the attack on your village, don't forget to rebuild the militia . Another attack may lead to a situation in which the village cannot defend itself. 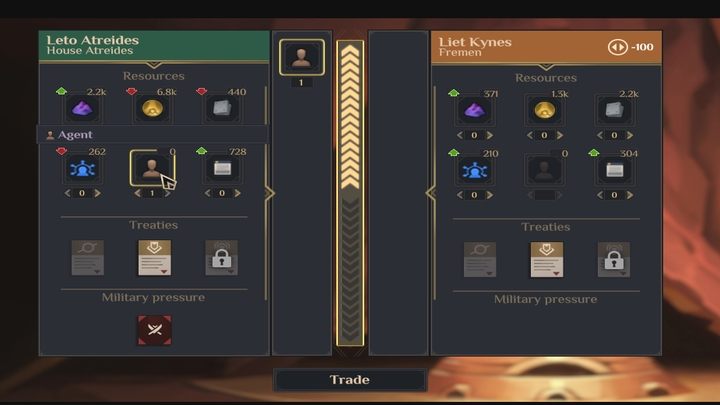 Trading Agents - you can sell captured agents from the faction he or she came from. On the one hand, you allow the enemy to engage with him again, but usually sooner or later the agent will run away on his own. So it's better to try to come up with an agreement regarding his/her case. You can intercept agents more effectively when you assign yours to the Espionage and operations.

Main base is a landing zone - you don't need to build a landing pad near your main base. You can pick up units from its vicinity and transport allied units from other landing sites nearby. 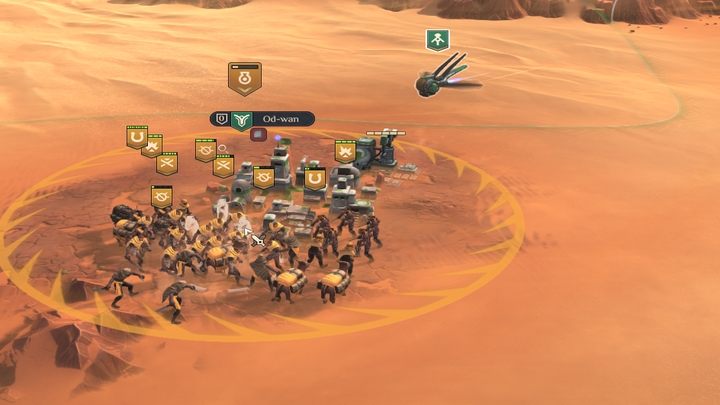 Use Ornithopter - apart from the possibility of exploring and interacting with discovered points, they can also track a selected unit, detect hidden enemy units, and in the case of proper research - also slightly heal allied units. 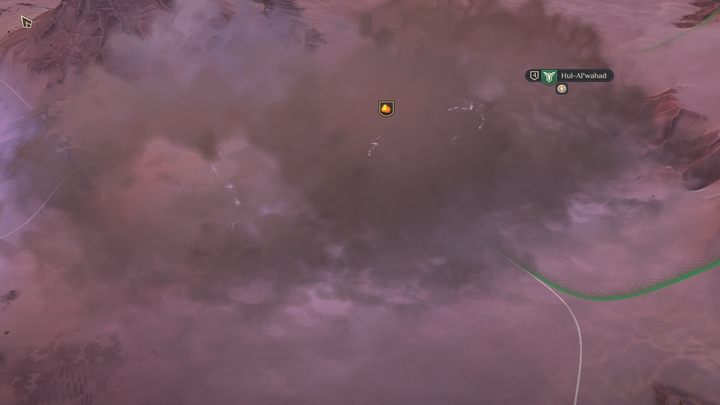 Sandstorms - this is the second threat, apart from Sandworm, that can destroy your units. It is almost impossible to get away from them (and from the direction they are heading), because the sandstorms move faster than the units. A sandstorm reduces production by 50% in the affected village . 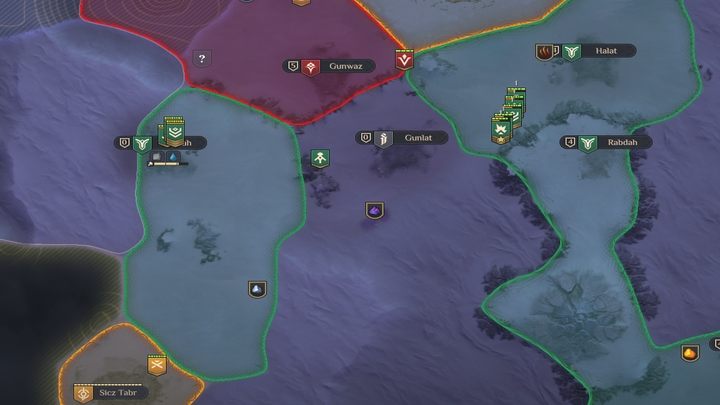 The captured areas do not have to be next to each other - if you want to accelerate the expansion to more distant areas or occupy places important to you by effectively managing your Authority points, you can take over enemy areas far away from your territory of influence.

The time of one game is around 2 hours - depending on the difficulty level, strategy and your knowledge of the game. For beginners, this time can be extended even up to 3 hours (counting the time elapsed in the game, excluding actions performed with paused time).

Watch out for luring units - enemy units passing by yours, even if they did not intend to engage in combat, will attract the attention of your troops, and they can start chasing the enemy. If you don't notice it, it may turn out that the enemy will drag you into a trap, into another opponent, or even into the desert. React to any information about a hostile incursion into your borders. 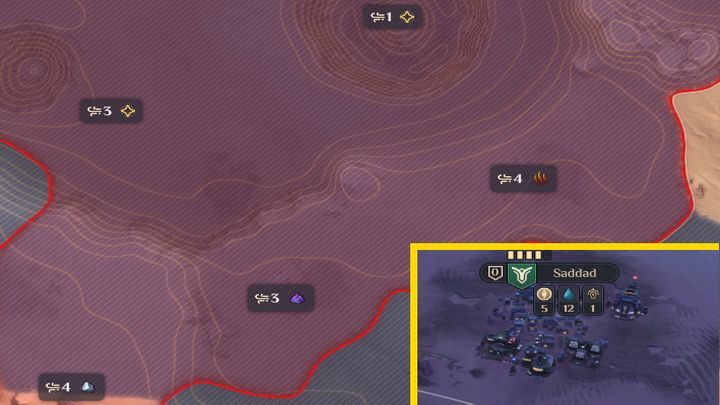 By pressing the I key, you can switch to the special view , which is an extended interface with more data, making it easier to check production in villages or compare regions on a zoomed out map.

Sometimes it is better to sell Spice to a different faction - depending on the current multiplier value in the default sale in KHOAM, quite often another player who lacks the spice will be happy to buy it from you immediately, for a higher conversion rate than KHOAM. On the other hand, if you've maximized the efficiency of your Spice trade (selling it for Solari), you can try to buy it back cheaply from the faction that has excess reserves of it. 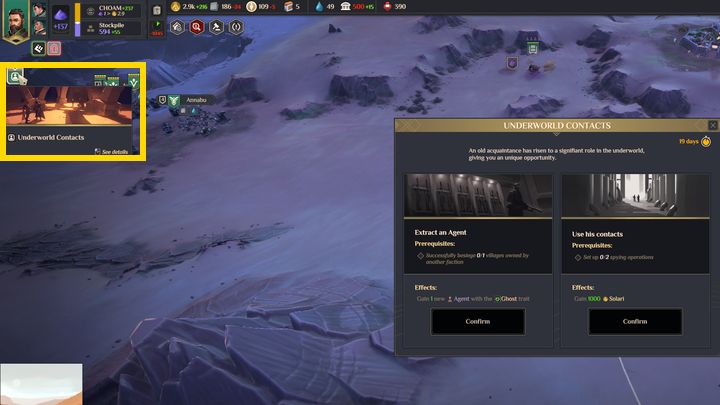 There are various special events in the game that appear on the left, below the faction leader icon. These are missions that are limited in time. Sometimes doing them is optional, in some other circumstances you have to do them to avoid negative consequences. Once you have to raid a village, another time you have to pay the appropriate amount of resources. Usually it is worth doing special tasks and you always have two options for completing them.