This guide to Dreams for PS4 features a description of the most important aspects of the game. It prepares the players for the adventures in the game world. Dreams enables the players to create amazing projects by providing them with various options and with a powerful game world creator. However, if you don't want to use the creator, you can find thousands of maps, projects and various works in the game. They all are created by the developers and by Dreams community.

In this guide, you will find advice, controls description and most important topics related to the game. Here you will also find instructions on how to easily start creating maps. Although it is impossible to create a walkthrough for all levels, thanks to our tips and advice you should be prepared to face every creation of the map creators.

In our guide, you will find information about the pre-order of the game on PS4, description of VR aspect of Dreams, presentation of interesting creations and projects of the community. In this article, you will find information about how the cooperation works in the game, restrictions related to copyrights and using motives from other works, and you will read about other novelties related to Dreams.

Dreams is a game developed by Media Molecule. It takes place in the world of dreams created by players. It is a three-dimensional game that features combat, riddle solving, exploration, and even racing challenges. The players can decide what sort of challenges will they implement in their creations. All dreams become a port of larger online universe that is open to exploring by the whole community.

The possibilities offered by Dreams are impressive. The users can create "games" of various genres and universes. Patient players can even create faithful copies of actually existing games. 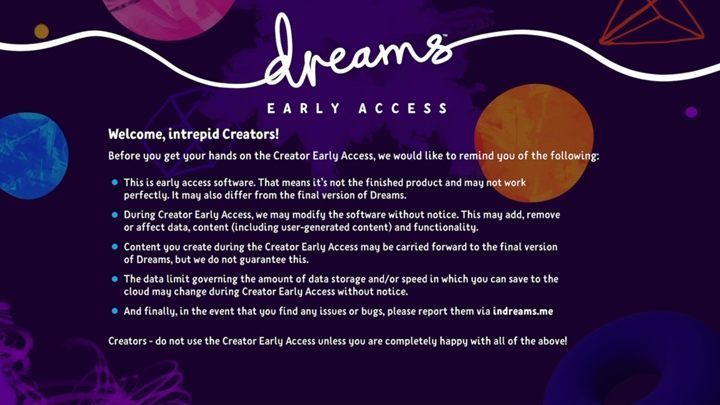 Dreams debuted in early access at April 16th. The game started with the majority of options available and with a fully functioning dream creator. This version of the game lacks a fully playable campaign and a working multiplayer mode. It also lacks the option to generate or modify a house (a space in the game that is similar to a lobby that server as player's quarters)

The dream creator is fully functional. It is very advanced and it enables you to create the same projects as in the full version of the game. It is also possible to play created dreams. Thanks to that, the early access version features quite a lot of content.

As for the full version, its release date remains unknown. The game might release in 2019, although if the developers will intend to add much content, then the debut might happen in 2020.

The game can be bought as a pre-order that provides access to the early access version of Dreams. Buying the game is possible via the PlayStation Store. It costs 20.99 euro.

Sadly, although the developers intend to add VR support to Dreams, the implementation of this mode won't happen fast. The early access version doesn't support VR. Media Molecule developers said that VR support will be added later in the production circle.

Media Molecule wasn't quite clear about the access to the early version of the game. According to them, the number of early access copies is limited (although the number of copies is quite high) and after some time the access to this mode might be closed for new buyers. The early access is mostly for creators who can already use the advanced level/world creator and create unique projects and games.

The developers mentioned that influencers can freely share their materials from the game online. There is no NDA for the early access version of the game - the players can freely create content and show their creations to the whole world or simply play dreams created by other players.

We created a few chapters focused on theory. They will help you with finding yourself in the world of Dreams. Here you will read about general information, advice, controls, available game modes, information about the multi-mode game. You will also learn how to create your own worlds/games.

Another chapter of the guide to Dreams features the most important questions and topics related to the game. Here you will find details about how to change the looks of the Imp and description of rules of creating dreams in the game. Here you will also find information about copyrights (whether you will find in the game ideas from titles like Dark Souls, Dead Space, Zelda, or Donkey Kong) and answer to the question whether the game is supported by a lot of additional content.

This site is not associated with and/or endorsed by the Sony Interactive Entertainment or Media Molecule. All logos and images are copyrighted by their respective owners.