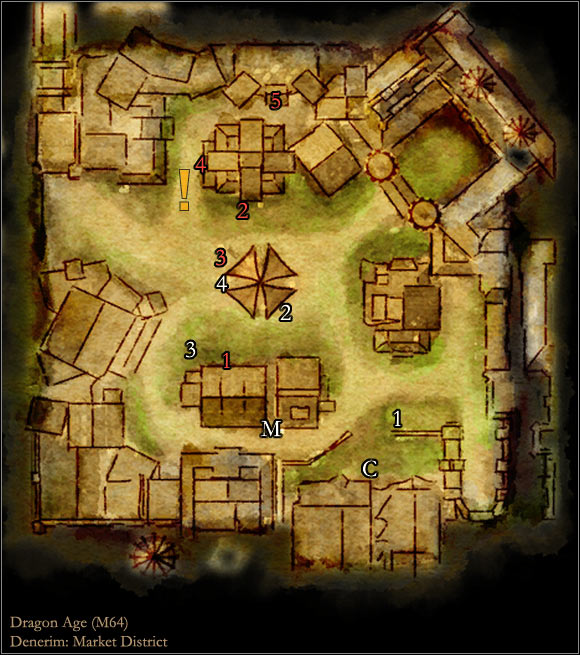 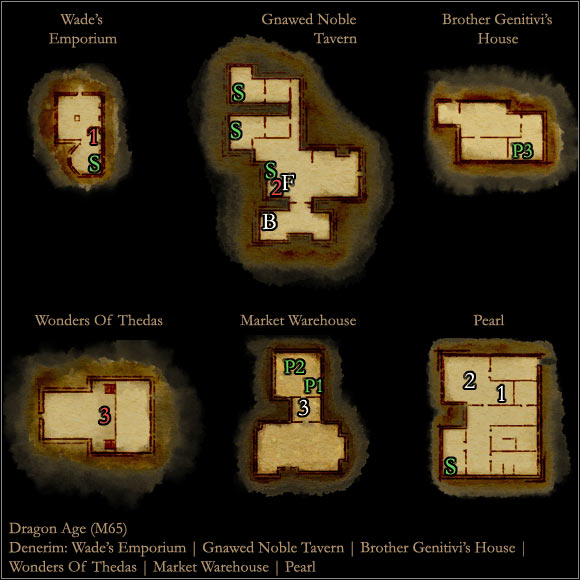 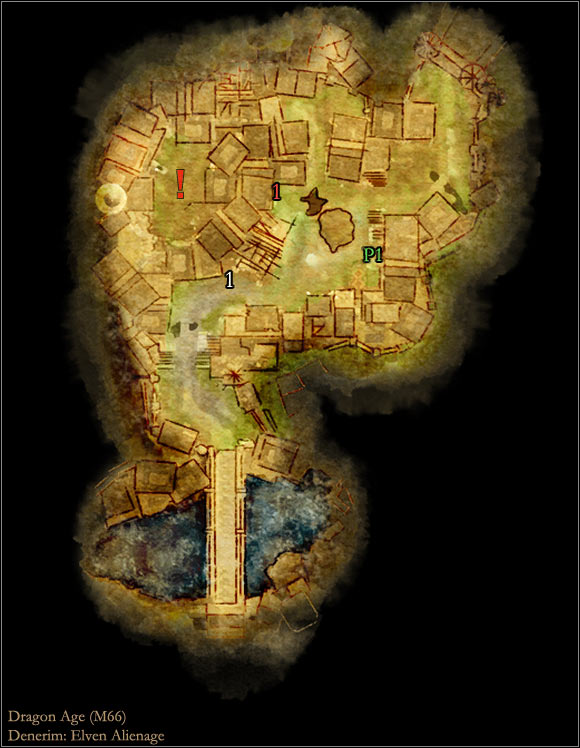 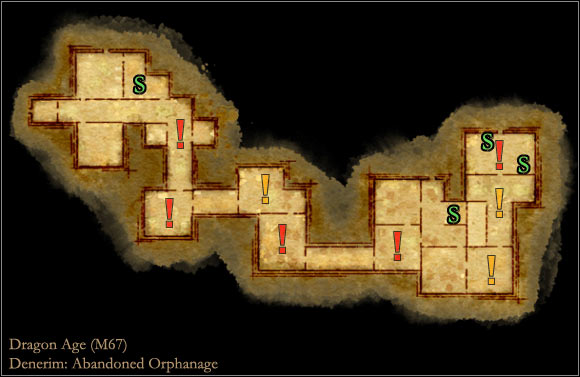 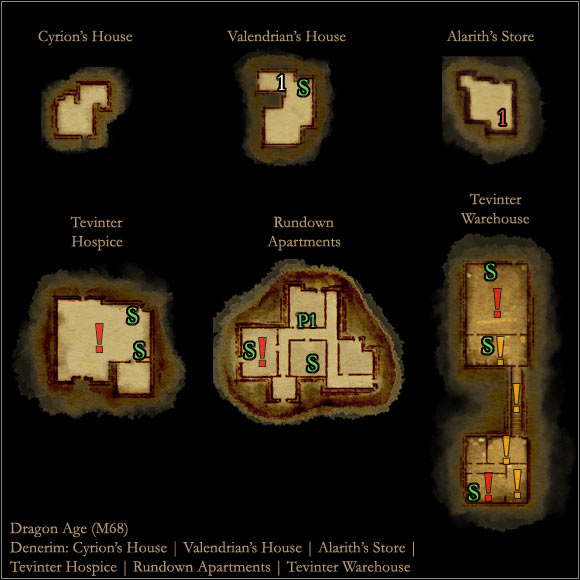 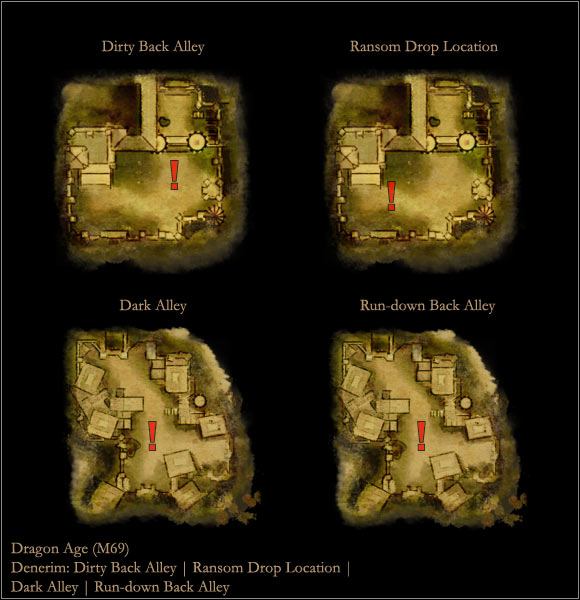 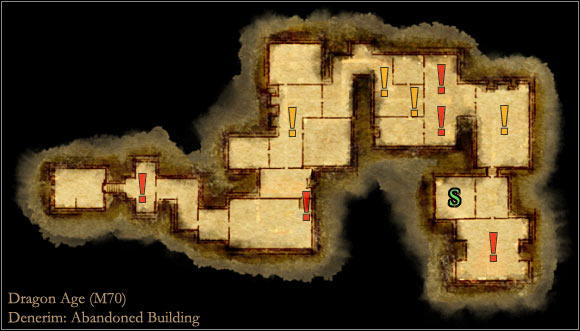 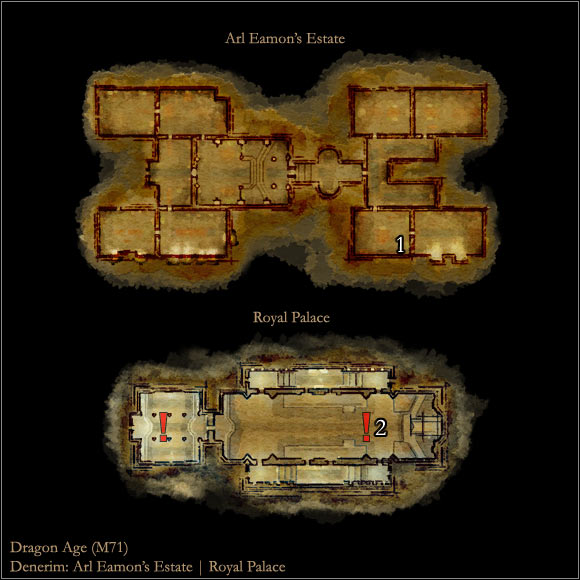 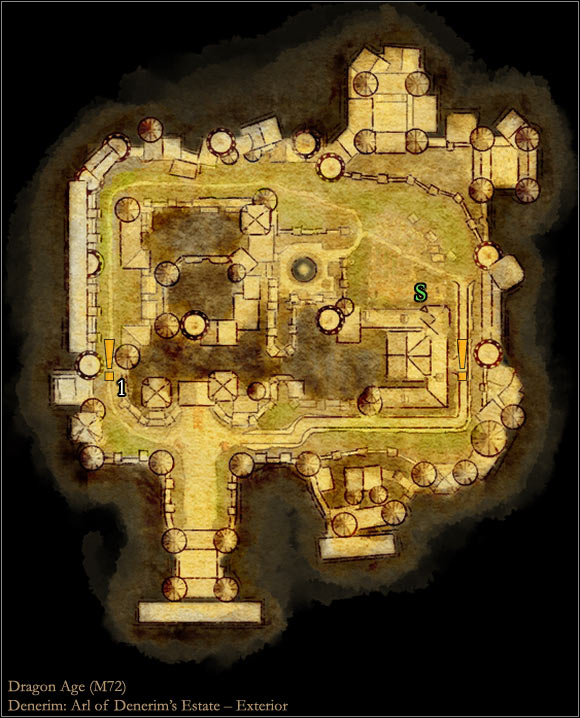 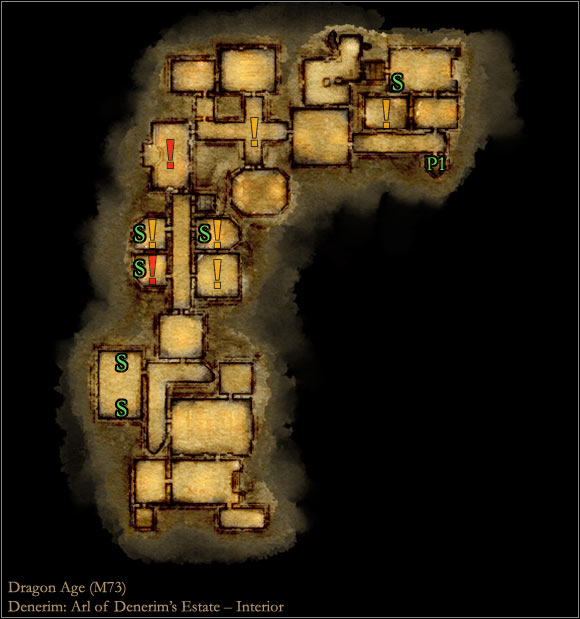 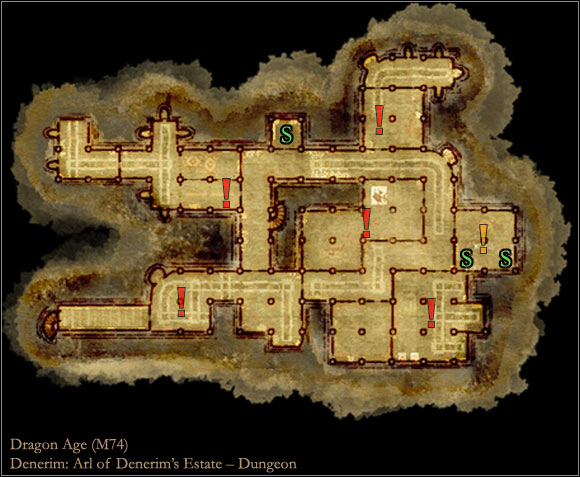 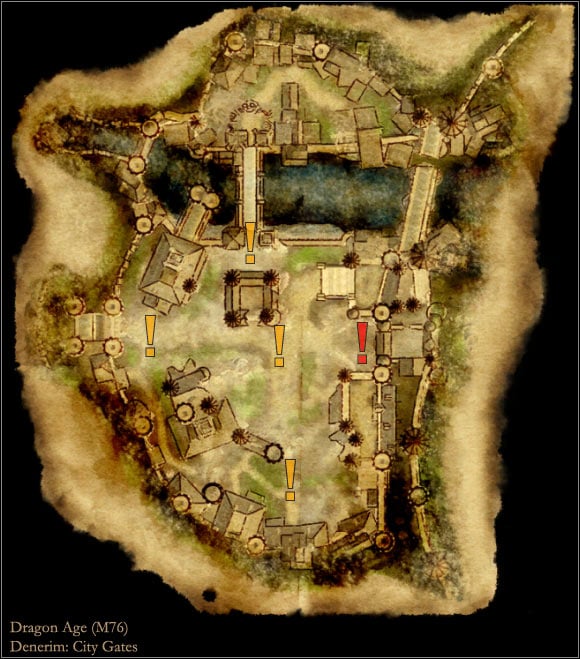 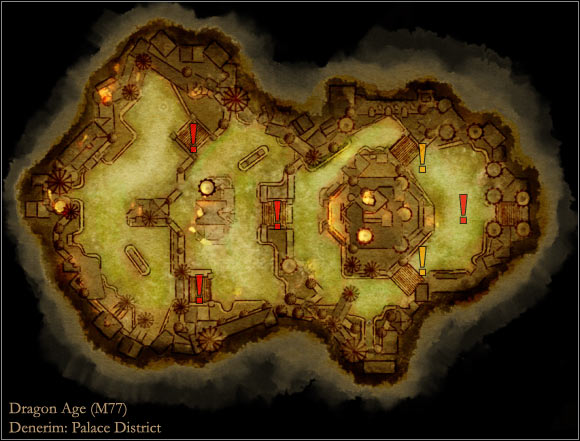 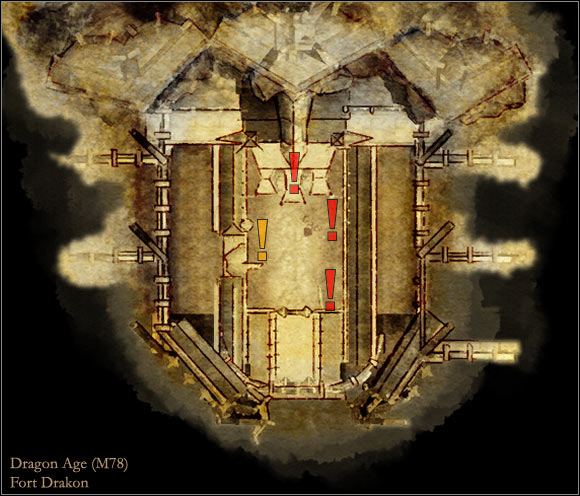 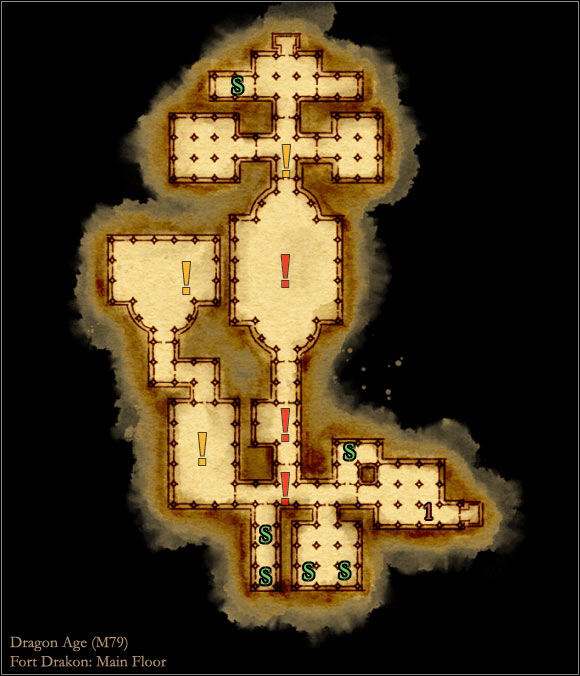 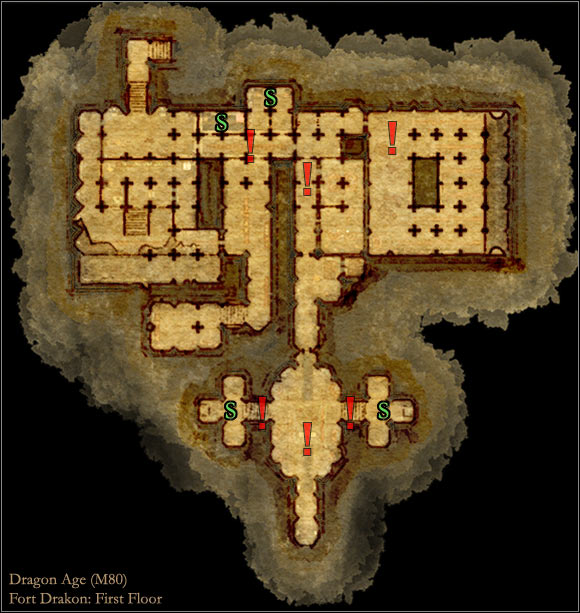 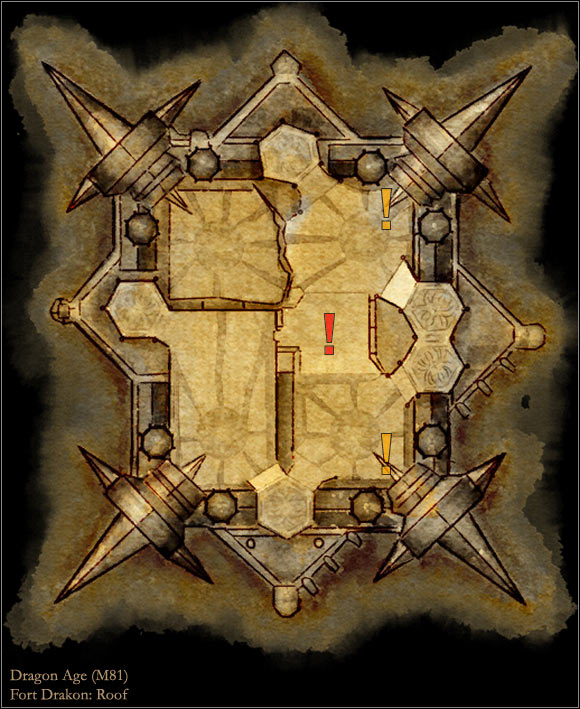 - Sister Teohilda and Mother Perpetua can be found in [Denerim - Market district] (M64, 1) and you can talk to them about the Song of the Light.

- Liselle is selling her goods in [Denerim - Market district] (M64, 2) and you can talk to her about flowers or about her home land.

- Sanga is running a brothel in [Denerim - Pearl] (M65, 2). You can pay 40 silver coins (or 30 silver coins if you use persuasion) for the services she is offering and you'll be allowed to choose between a man, a woman and a "surprise".

- After you've successfully completed both quests for Sergeant Kylon make sure to talk to him later in the game. He can still be found in [Denerim - Market district] (M64, 3) and he'll offer you additional gold as a token of his appreciation. 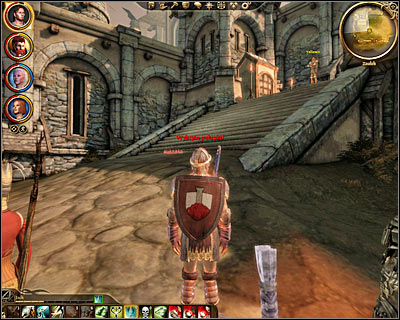 - During your time spent in [Denerim] you can encounter Taliesen of the Antivan Crows. The meeting will occur only if you've already recruited Zevran and while travelling between different parts of the city. Listen to a short conversation between him and Zevran (your elven follower will automatically join your main team) and after that you'll start a battle with a group of assassins. Make sure to STAY AWAY from the stairs, because the entire area is booby-trapped.

- If you decided to become a city elf at the beginning of the game and if you agreed to take Vaughan's bribe instead of killing him you'll have a chance to retrieve the gold he gave you as soon as you've started Saving the queen quest. Wait for your team to end up in [Denerim - Arl of Denerim's estate - Exterior] and head north-west. Examine debris found near one of the walls of the estate (M72, 1). 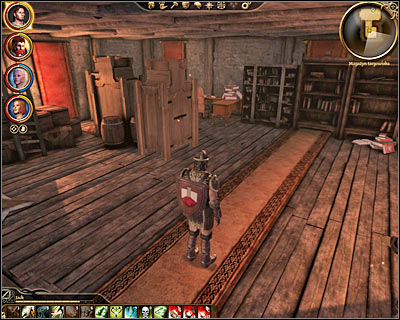 - Once you've successfully completed Saving the queen quest visit arl Eamon's room in his estate and you'll meet Riordan (M71, 1). He's the Grey Warden you've had a chance to rescue while exploring [Denerim - Arl of Denerim's estate - Interior] and in return for freeing him he'll mention a treasure. You may now travel to [Denerim - Market district - Market warehouse] (M65, 3). Clicking on a cabinet will unlock a secret room filled with a lot of valuable items.

- During your stay in [Denerim - Elven alienage] you may be stopped by a hungry veteran (M66, 1) and if you decide to give him money the next time you pass by this area you'll encounter more beggars and they'll also ask you for help. They will continue growing in numbers until you give coins to all of them. If you want to end this prematurely you can use intimidation and you can also uncover a wealthy elf who was trying to blend in with the rest of the beggars.

- Once you've successfully completed Unrest in the alienage quest and assuming that you've decided to help the elves instead of allowing them to become slaves you can visit their leader Valendrian in [Denerim - Elven alienage - Valendrian's house] (M68, 1). He will thank you for your help and offer you Grey Warden's gift.

- You may be attacked by the bandits while travelling between different areas of [Denerim] and they will stop you near a large gate. Notice that they will reveal their positions only if you've stepped through the gate, so you'll have to act quickly. Once they're gone head back to the stairs and look around to find a phylactery. Trying to interact with the vial will result in a powerful revenant attacking your team. 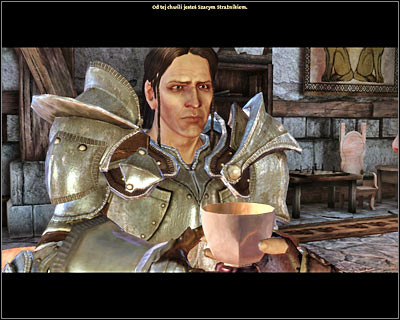 - Loghain can join your team at the end of Landsmeet quest. Start off by heading to [Denerim - Royal palace - Hall of the Landsmeet] and click on the door to proceed with the quest (M71, 2). During the meeting you'll have to defeat Loghain, either in a honorable duel or in a huge battle. This will trigger a conversation with some of your allies, including Alistair. Most of the people in the palace will want to see Loghain's death, however you will have to ignore their demands and instead listen to Riordan's plan. Riordan will suggest that Loghain should take part in Grey Warden's ritual and if he survives he should join the others in the final battle against the archdemon. If you agree to this plan Alistair will not only leave your team forever, but he's also going to be executed. You can prevent this from happening by talking to Anora and reminding her of your agreement and in this case instead of being killed he would be banished from the kingdom. As for Loghain, you'll have a chance to talk to him and to equip him with better items after the landsmeet has ended.

- Cesar [Denerim - Market district] (M64, 3) - you can ask him about showing you special items after you've completed Trial of the Crows quest for Ignacio

- Alarith [Denerim - Elven alienage - Alarith's store] (M66, 1)(M68, 1) - you'll be allowed to trade with him after completing Unrest in the alienage quest

- Sandal [Denerim - Fort Drakon - Main floor] (M79, 1) - last chance before the final battle with the archdemon (aside from buying goods he can also enchant your items)