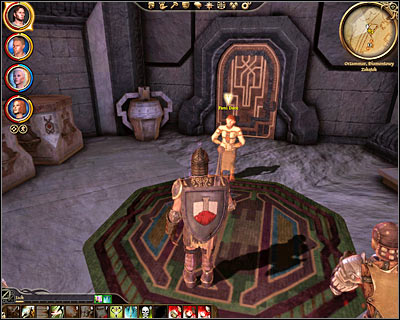 Description: This quest consists of two parts. The first part will require you to deliver the documents that would implicate Harrowmont to two other nobles. The dwarves you'll have to locate can be found in Orzammar. Lord Helmi spends his free time in [Orzammar - Commons - Tavern] (M48, 9) and Lady Dace is standing in [Orzammar - Diamond quarter] (M52, 3). 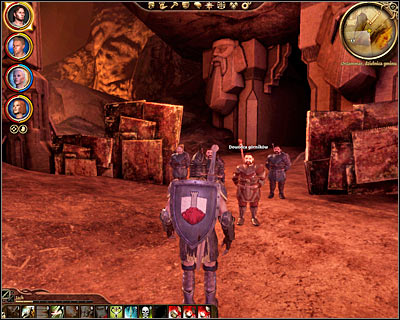 During you conversation with Lady Dace you'll find out that the person you'll need to talk to is her father and she can provide help in finding him. Notice that she gave you a pass and therefore you'll be allowed to travel to the Deep Roads. Start off by going to [Orzammar - Commons] and then head south-west until you're stopped by the miners guarding the exit (M48, 10). All you have to do here is to show them the pass and they'll let you through. Locate the exit (M48, 11) and choose [Aeducan thaig] from the map. 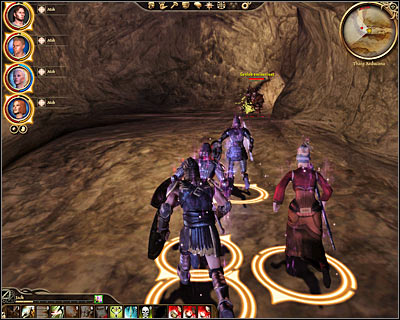 The location you're standing in (M55, 1) might seem like a labirynth at first, but you won't be spending a lot of time trying to find the correct path. Your target can be found to the south-west. Notice two additional areas to the south and to the south-east. Exploring them is optional, however you would be allowed to find a lot of cool items. As for the monsters, for most of the time you'll be dealing with different types of genlocks and hurlocks. Watch out for mini-bosses (genlock emissary, genlock alpha), because their attacks are going to be much more powerful. Don't forget about the possibility of encouraging the monsters to chase after you, so you won't have to deal with all of them at the same time. 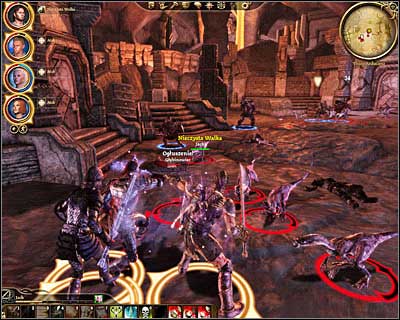 You'll also start encountering deepstalkers, however defeating these creatures won't be a big problem. Their attacks will inflict minimal damage, even if they manage to surprise and surround your team. Eventually you should make your way to a much larger cavern (M55, 2) where Dace's forces will be defending themselves against the monsters. Assist the dwarves in dealing with the deepstalkers. Notice that eliminating the first group won't solve the problem, because more deepstalkers will show up in a few seconds. Defeat them as well. 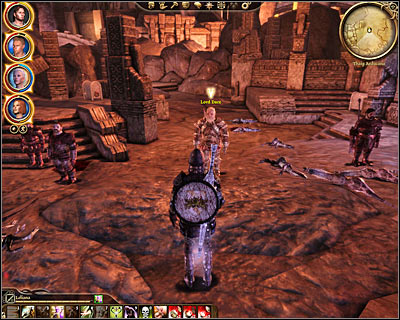 Once you've eliminated all the creatures you'll be allowed to talk to lord Dace (M55, 4) and to show him the documents. Your new ally will also inform you that you'll get lower prices from local traders as an act of gratitude for your assistance. You can now continue exploring the thaig or you can decide to return to the city immediately. Go back to Vartag (M53, 5) in [Orzammar - Diamond quarter - Chamber assembly].