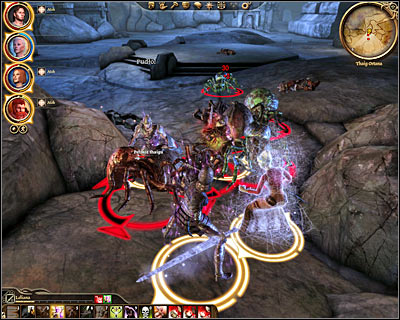 Description: Filda (M48, 4) will tell you a sad story of her son who went missing a few years ago in the Deep Roads. You can agree to find her son Ruck and you'll have to wait for the game to unlock [Orzammar - Ortan thaig] before you'll be allowed to resume this mission. Check the central area of the thaig and you should notice that Ruck (M57, 4) has escaped to a nearby passageway. Sadly if you follow him you'll end up standing in a trap, because a large group of spiders will attack your team. During this fight you should focus primarily on defeating the deadliest types of spiders, because the monsters will be capable of taking down your teammates. There's also going to be a mini-boss among the spiders and you should deal with it once all the other creatures are gone. 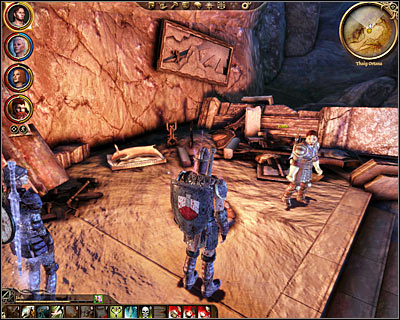 Once you've won you'll be allowed to use the northern passageway and thankfully you won't encounter any other monsters along the way. Approach Ruck (M57, 5) and initiate a new conversation with him. Once you've had a chance to hear his story you can decide to kill him, you can promise to lie to Filda about his current status or you can inform him that his mother will find out about everything you've discovered so far. I would recommend mentioning bartering goods during the conversation, because Ruck can also become a trader. End this quest after your return to [Orzammar - Commons]. Find Filda again (M48, 4). You can lie to her that you haven't found her son or that he's dead or you can tell her the truth (the whole truth or only some of it). If you've managed to comfort Filda she will reward you with Ruck's shield.