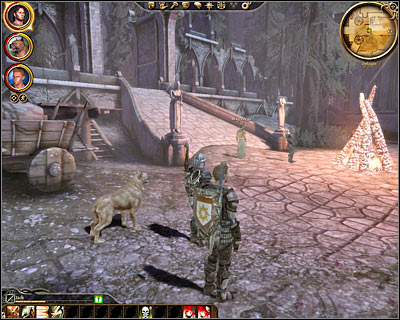 Description: Start off by travelling towards a nearby bridge (M22, 7) and once you're close enough you'll be rewarded with an interesting cut-scene. Head forward, ignoring all the fights and explosions taking place in your vicinity. You should be heading towards [Ostagar - Tower of Ishal]. Once you've arrived at your destination one or two NPC's will join the team (only the mage or a mage and a guard). Make sure to equip your new allies, because you'll need them to finish this quest. Enter the tower grounds (this is the area that was inaccessible up till now). 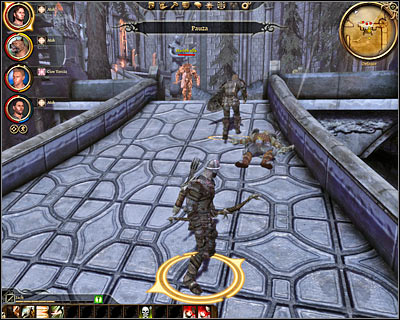 Keep heading north-east and don't be surprised by the fact that a lot of hurlocks and genlocks will stand in your way. Try using the mage in your team to cast powerful spells and don't forget to keep your archers and mages away from the main battles. Remain in one area until you've defeated each group and don't forget to spot and kill enemy archers sooner rather than later. Eventually you'll make your way to the main gate of the tower (M22, 9) and this is where you'll meet an alpha Hurlock. Use the same tactics as before and you should be fine. 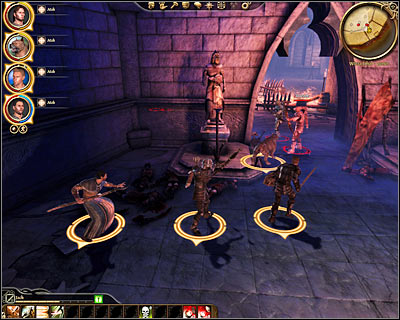 Opening the main door will result in your team travelling to [Tower of Ishal - Ground floor] (M23, 1). You'll have to be extremely careful here, because a Genlock emissary is waiting for you in the next room. I would recommend that you encourage the boss to come here instead of trying a frontal assault. You can also try putting out nearby flames using a proper spell. Don't forget to heal your team members frequently to prevent them from dying too many times. 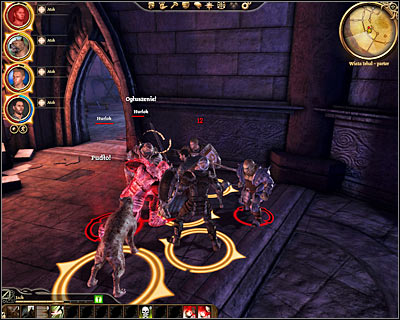 Once you've taken out the mini-boss focus on securing this entire level. You'll have to explore one larger room and two smaller ones. Each time be careful and try showing yourself to enemies to make them come to you instead of entering new rooms to be surrounded by them. You must make your way to the stairs leading to [Tower of Ishal - First floor] (M23, 2). 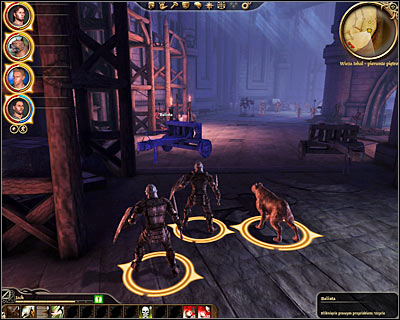 The good news is that the first floor of the tower is not being guarded by any bosses. The bad news is that once you've reached the main corridor you're going to be surprised by two groups of monsters. I would strongly recommend using ballistae during your time spent in the tower (M23, 3), because this way you can harm enemy units easily. Once you've secured the main corridor proceed to a smaller room where the last fight will take place. Finish off by using the stairs to go to [Tower of Ishal - Second floor] (M23, 4). 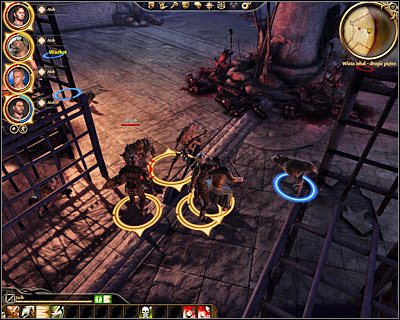 The second floor of the tower contains more rooms and almost every area is going to be guarded by enemy forces. Make sure that you're not moving too fast or you can end up being overwhelmed by the number of enemy units. You'll come across a Genlock alpha in one of the rooms, but on the other hand you'll be allowed to make the process of securing the tower easier by opening cages with friendly mabari (M23, 5). Wait for the dogs to secure the area for you and then find the staircase leading to [Tower of Ishal - Top floor] (M23, 6). Make sure to SAVE YOUR GAME before heading up to the top. 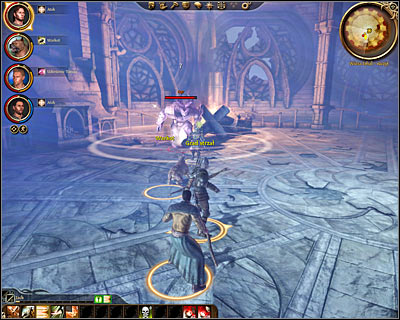 You'll now have to take part in your first serious boss battle and you'll be going against an ogre (M23, 7). I would recommend that at least two members of your team should begin attacking the beast from the distance, because ogre's direct attacks can take a lot of damage. Besides your mage or your rogue can stun/paralyze the opponent and it'll make the process of injuring the beast a lot easier. 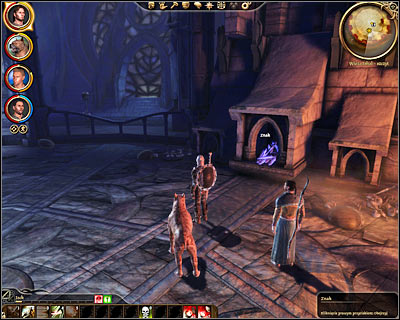 Keep attacking the ogre with a team divided to mages/archers and warriors. Don't forget to take special care of less resistant members of your squad, because they can die almost instantly if the ogre gets to them. It's also important to keep using all the abilities you've unlocked so far to increase chances of scoring good hits or to make ogre's attacks less powerful. Once the ogre has been defeated check its body for precious artifacts and then click on the fireplace to start to start the fire. 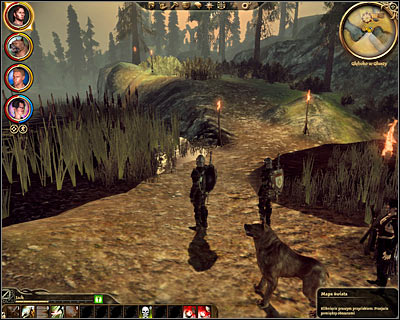 Once you've finished your mission in the tower you'll see a very important cut-scene after which you'll end up in [Flemeth's hut] (M24, 1). Wait for the main character to wake up and you'll be given a chance to talk to Morrigan. This conversation will continue outside the hut (M24, 2) and you should pay attention to what you say in order to prevent Alistair from hating you and to score first relationship points with Morrigan. At the end of the conversation you'll find out that Morrigan will join and your team and you'll also activate four main quests - Arl of Redcliffe, Paragon of her kind, Nature of the beast and Broken circle. You can find out more about these assignments in the Main quests category of this guide. Leave this area (M24, 3) and confirm that you want to travel to [Lothering].