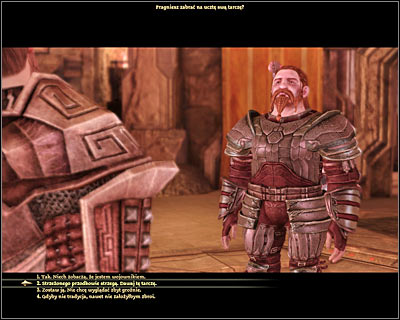 Description: Your friend Gorim (M16, 1) will inform you about an upcoming feast to celebrate the main character becoming an officer and he'll also tell you that you can spend free time by visiting local merchants in the Diamond quarter or by going to the arena to watch some fights. I would recommend that you agree to take a family shield with you and you should also pick up items from a nearby crate once you're done talking to Gorim. Proceed to the exit (M16, 2) to find yourself standing in [Orzammar - Diamond quarter] (M17, 1). 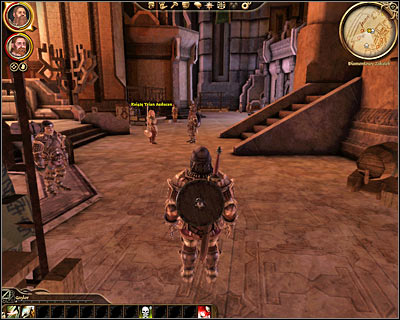 It won't take too long for you to meet your two brothers - Trian and Bhelen (M17, 2). You can be harsh during the conversation if you want to, because you don't have to worry about any repercussions. There are four traders in the diamond district (M17, 3) - silk merchant, armor merchant, weapon merchant and magic merchant. Once you're ready to move on with the quest head south-west and talk to a member of a royal escort (M17, 4). You'll find out that it's not safe to travel alone, so the guards will accompany you to the arena. 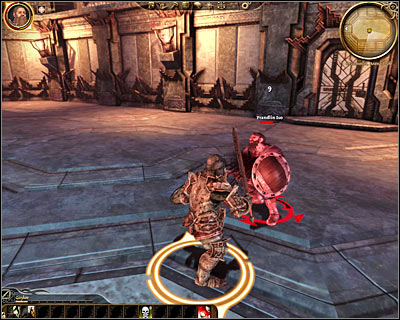 It won't take long before you're escorted to [Orzammar - Proving grounds] (M18, 1). Talk to Proving master here (M18, 2). You can decide to remain in the audience and to see a couple of duels or you can ask him to allow you to participate in arena fights (M18, 3). If you decide to challenge other dwarves you'll have to defeat Aller Bemot, Adal Helmi, Sir Backstone and Frandlin Ivo. Each duel will be harder than the previous one and it's also going to be important to keep using available abilities. The reward for winning all four duels will be a proving helm. You can keep this item to yourself or as a gesture of goodwill you can give it to your last opponent. Once you're done visiting the arena talk to the royal escort again (M18, 1) and confirm that you want to return to the Diamond district. Head on to the start area (M17, 1) and open the large gate to return to [Orzammar - Diamond quarter - Royal palace]. Proceed to the throne room (M16, 3). 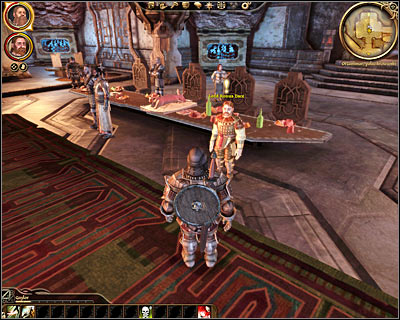 Lord Ronus Dace (M16, 4) will want to talk to you and it would be a good idea to grant him with an audience prior to approaching king's throne. You can agree to his proposal to give the rights back to the surfacers or you can dismiss his idea. If you say yes you should also consider asking him about something in return and Ronus will offer you 100 gold coins (don't count on getting rich so soon, though). 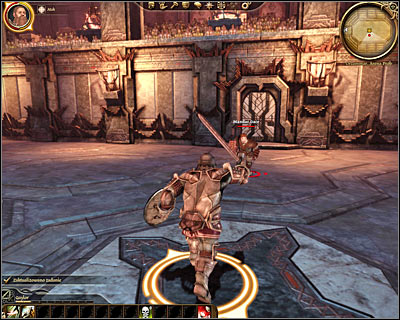 If you talked to Dace you should also consider talking to Lady Helmi (M16, 5). She'll start the conversation with an unpleasant statement if you agreed to Dace's idea. Helmi will inform you that if you agree to his plan the entire kingdom will find itself in debt. You can ignore her concerns, you can agree to help her in dismissing Dace's idea during the conversation with the king or you can return to Ronus to find out more about his plan. If you choose the last option you can tell him that you know his real intentions. The most extreme solution in this case would be to challenge his royal house to a honorable duel in the arena (M18, 3). The goal here would be to defeat one of Dace's most skilled warriors - Mandar. 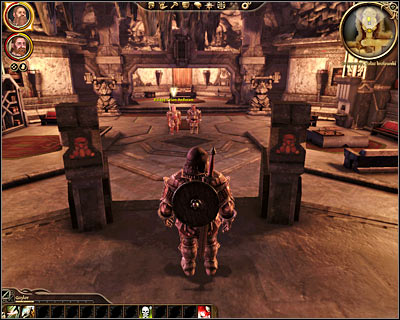 Approach the king's throne (M16, 6) to start the ceremony. During the ceremony Lord Dace will present his idea and you'll have to choose between backing him up and dismissing his plan. If you helped Dace talk to him after the celebration and he'll give you a note of credit with a promise of a payout in the near future. King Endrin will ask you to find Trian for him and in order to do that you must go to his quarters (M16, 7). Trian will leave soon after you've arrived and that'll leave you with Bhelen. Your brother will share his concerns that Trian is probably trying to kill you to have real chances in seizing the throne. You can agree to plan the murder of Trian or you can ignore Bhelen's idea.