In this chapter you will see how the day and night system works, what to watch out for as you cross new lands at night, and how to deal with certain risks. 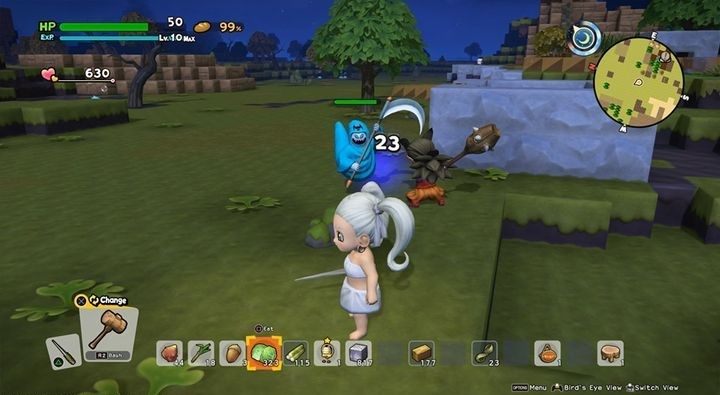 In Dragon Quest Builders 2 there is a day and night cycle - depending on the time of day, both NPCs and monsters will behave differently.

During the day everything is normal, NPCs work, perform their activities, eat or defend themselves against the attacks of monsters. Monsters, in turn, walk and reside in a designated places. When they feel threatened, they may start an attack. This is a good opportunity to start growing crops and plants, because every NPC will help you in this, whether to sow the land or to water your crops.

However, during the night both monsters and NPCs are going to sleep. When the monster is sleeping there is a bubble over its head. This is a great opportunity to sneak into a place guarded by a strong opponent and attack him a few times - as waking up after an attack takes a bit.

One of the main problems in wandering around in different locations at night is a monster holding a scythe - a ghost, reminiscent of a death reaper. He is quite a strong opponent who may appear behind your back. When he gets a little injured, he can disappear for a moment to attack you again. His damage is quite severe, especially at an early level, so it is advisable to avoid fighting him, although killing him will give you quite a lot of experience. However, this monster has one weakness. He's very afraid of light or fire. If this creature does not leave you alone, and you want to walk during the night in Dragon Quest Builders 2, it is best to equip yourself with some kind of light source. When he sees a light, the monster will run as far away from you as possible and then disappear. This does not mean, however, that he will not reappear.