On this page of our guide to Dragon Quest Builders 2 you can read about various starting tips that will help you find your way around the vast game world. In addition, you will learn about various tips that are not that obvious and game doesn't provide any additional info about them.

Fall damage is ON - be careful 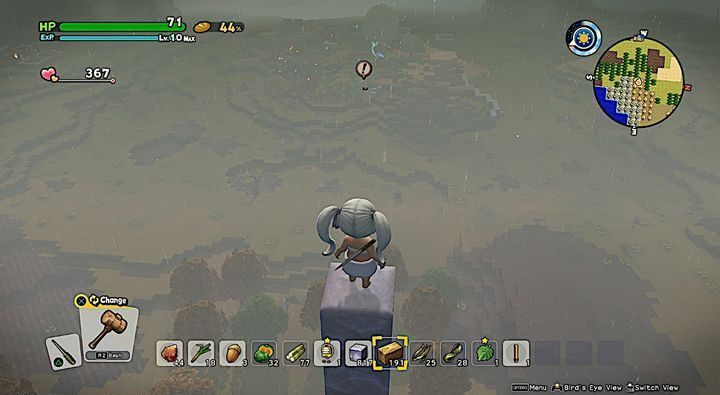 As you travel through the world of Dragon Quest Builders 2, you will sometimes have to climb high enough to get to another place. In doing so, you must bear in mind that fall damage is working in this game. Falling from quite a high altitude can quite strongly reduce the level of health of your character. The advantage, however, is that from the very beginning your character will not die, but will stay alive with one HP point, so you do not have to worry that your character will die because of your lack of attention and fall from a high altitude. In addition, injuries will only occur if you fall to a hard surface. If you jump into water, you will not be injured at all.

Don't swim to the open sea 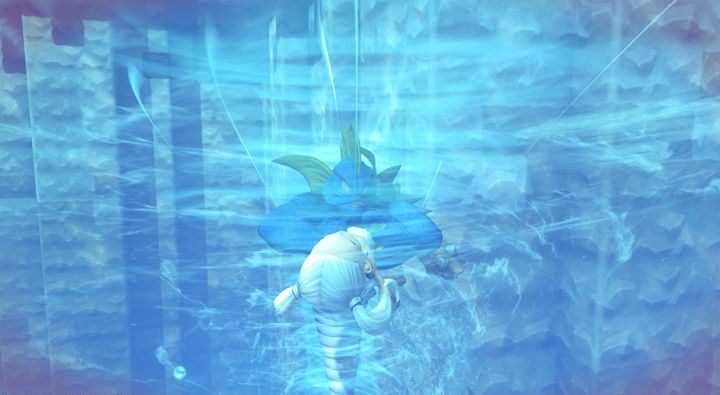 As you will explore many places on various islands, you may very often have the opportunity to enter the water and swim. However, it is not recommended to immerse yourself deeply in water, because of a few problems you may encounter.<br>The first one is the endurance bar, which may run out and cause your character to lose some health points. To avoid this, all you have to do is go out into the air.

The second problem is that if you dive too deep, your character will automatically lose part of his HP and then appear in a place closest to the land.

However, the most serious problem is a creature that inhabits the deep waters of Dragon Quest Builders 2. This is a very strong opponent, whom you don't have a chance to kill in the early levels, but he can literally kill you with one blow. In addition, it is not so easy to escape from it, as it has an attack that creates a vortex of water that attracts you right to the deep-sea creature. If the monster appears, you'll be informed about this event by a message on the screen. 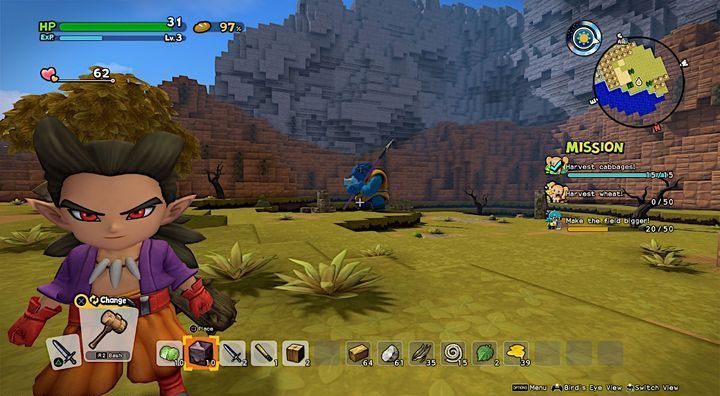 Strong opponents usually stand out bigger than other creatures. In addition, there are more difficult to beat versions of the same opponents, the so-called super strong enemies. They usually differ from their weaker versions by their larger size, different color and new set of attacks from their predecessors. These are dangerous opponents which (in a moment of carelessness) can easily bring your health bar to zero. This does not mean, however, that such opponents are unbeatable even for your poorly armed character. However, it requires a lot of patience and time to find a way to defeat such an enemy (usually holding the enemy's back and attacking him at the right moment is enough).

Explore and you will be rewarded 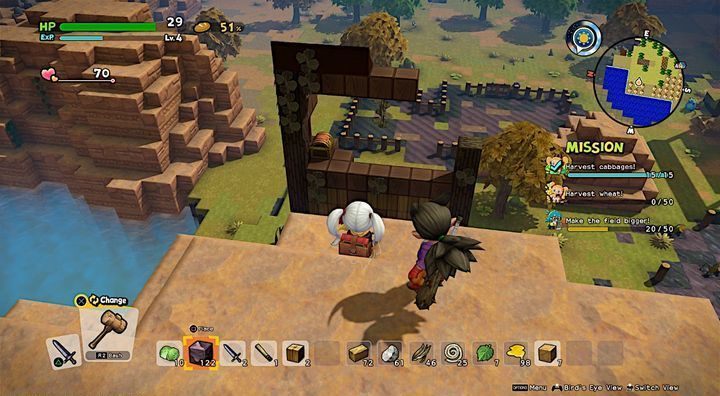 Exploration is one of the most important elements in Dragon Quest Builders 2. Not only you can discover interesting places where you can teleport yourself later, but you can find a lot of valuable loot that is usually hidden in chests. Chests can be found everywhere, on earth, in homes, in caves, sometimes even high in the air. Over time, a dog will join your team. He helps in finding items and seeds hidden in the ground. Also, he tells you that there is a chest nearby. 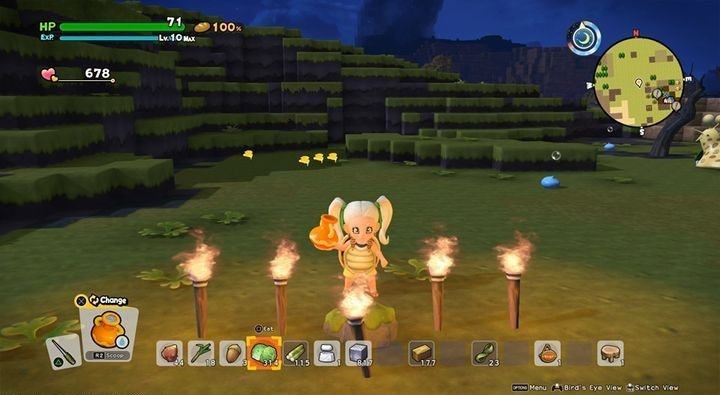 Access to the most important items in Dragon Quest Builders 2 will be available as the story progresses. These items are, for example:

Gloves - Access to gloves is provided at the very beginning of your adventure in Dragon Quest Builders 2. They allow you to move most blocks and items in the game world and place them anywhere you want.

Giant Mallet - you obtain it from NPC called Hairy Hermit. This great hammer is used to destroy blocks and objects. You can use it to fight as well, however, it doesn't do much damage. Over time, the hammer gains a new ability that allows it to destroy several blocks at once.

Bottomless Pot - Access to this item is gained after completing several major missions on the island of Furrowfield from a friend of Pastor Al. The bottomless pot is used to water the fields. Do not be afraid that the water will end, as its name indicates, the pot has no bottom. You can get all kinds of water, both clean and dirty. To collect water, you need to press the "use tool" button, and to drop or pour water wherever you want, you need to hold the aforementioned key (on the PS4 console it is R2 button).

How to build a home for pets?

In Dragon Quest Builders 2 you can create a separate place for pets, where they can rest. Making a cozy apartment for pets is not difficult. In order to unlock a pet house you need such items: 1 Haystack, 1 Pet Bedding, and 1 Pet Bowl. Of course, like any other room, you should put a minimum of 2 blocks of height to create a small or large area, depending on your preferences, and make a gate. Also, you can prepare more items for your pet enclosure, but the minimum criterion for creating an apartment for four-legged companions are the ones listed above. 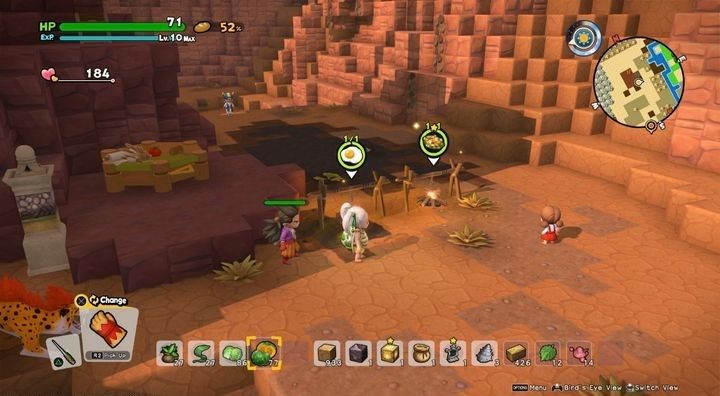 In Dragon Quest Builders 2, you have to eat in order to survive. Food regenerates your starvation bar and health points, so it's always required. Some meals can be eaten raw without prior preparation with the use of campfire. However, it is recommended to prepare the meal properly. If you cook/bake food from any dish, you can get a much richer version of the food that will renew much more HP and fill your belly more significantly. In addition, such food can also give you various benefits, like increased resistance to enemy attacks or increased damage.

To create a basic bonfire, you need 3 units of wood and oil (you'll get these components from a blue slime or other monsters).

After creating a bonfire, you can throw in your meals, which will be marked with a red pot.

The list of dishes you can cook is presented below: