Enter the new area of the castle. You'll find yourself standing inside a fairly large crypt. You should notice five coffins here and obviously you'll have to examine all of them. I would recommend moving counter-clockwise, starting with the nearest coffin (screen). Wait for the game to zoom in on the coffin. Read the inscription (Moana) and memorize the numbers (12176). 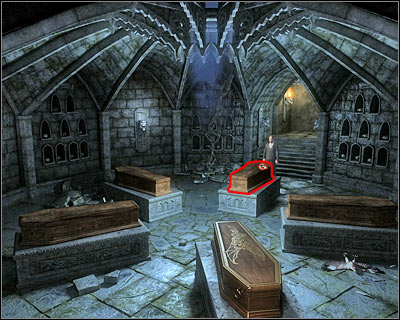 Once you've examined the top of this coffin, try opening it. You will notice a vampire inside (Moana). A new report is going to be added to your personal diary- Moana. Go left and inspect the second coffin. It's going to be empty, however you may decide to open it just to be certain of that. Proceed to the third coffin. Just as before, you will be presented with a close-up view. This will allow you to read an inscription (Illona) and memorize new numbers (8954). 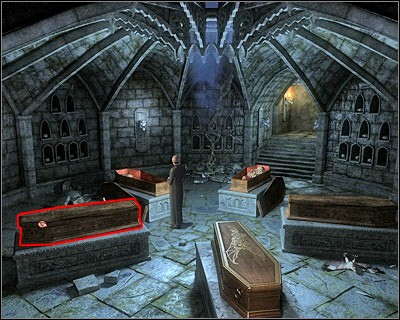 Open the third coffin and you'll notice a body of Illona. Once again, you will receive a new report. This time you'll receive some information on Illona. Try clicking on the fourth coffin and Van Helsing will say that it probably belongs to Dracula himself. Check a new report in your diary -Count Dracula's Castle. As you've probably suspected, you will have to destroy this coffin. Choose an axe from your inventory and use it on the coffin. Examine the body of a dead bird while you're there. 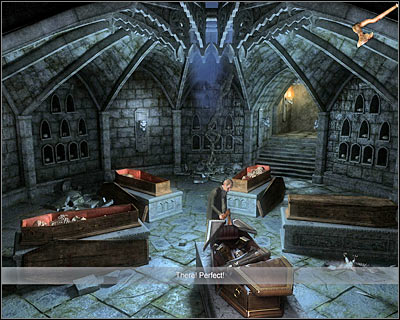 You may proceed towards the final fifth coffin. Open it and you'll see a familiar face - it's Harker! If you've been reading documents in the past, it shouldn't come as a surprise to you that he's been turned into a vampire. Start off by picking up some of the documents. Take Harker's Journal, as well as book on Myths and Legends from the First Order of Knights. Obviously you should consider reading both documents, especially since they are fairly short. I wouldn't recommend ignoring them, because you'll find out a few important things. 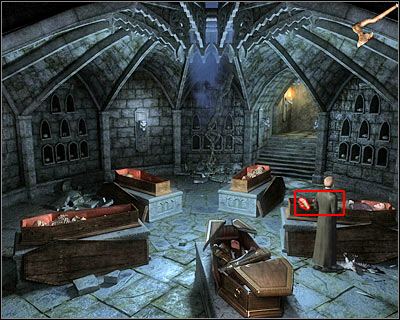 Take Harker's Glasses while you're there. Sadly, you will have to put your friend out of misery by dealing with him the same way you would have dealt with any other vampire. Open your inventory. Combine a hammer with a stake (screen). Choose the new item and click on Harker's body to kill him (cut-scene). You can't perform any other actions here, so you may as well go back to the entrance to the castle. 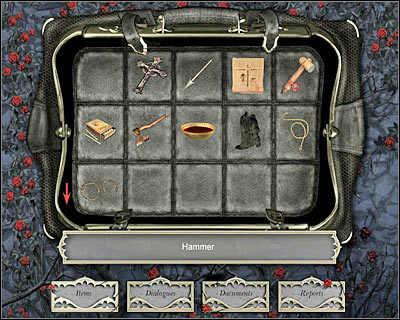 As you probably member, you haven't clicked on the right door, so that's where you'll have to go. You'll end up standing in a very large hall. There are two paintings to your right (screen). One of them shows Illona (click on the painting and on its description) and the second one is a portrait of Count Dracula himself. Choose the left passageway, so you'll get closer to a second group of paintings. 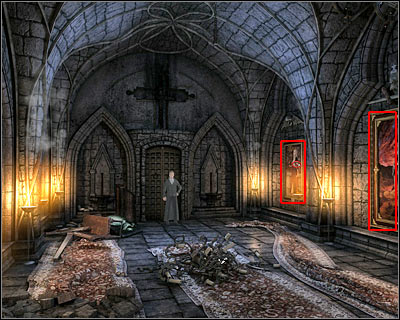 There's a small painting on the ground (screen). Examine it and listen to what Van Helsing to say. He'll notice that it's different from the rest, because it has religious references. A new report is going to be added to your personal diary, called Genesis. Click on a large tapestry (screen) and wait to get a close-up view of this masterpiece. 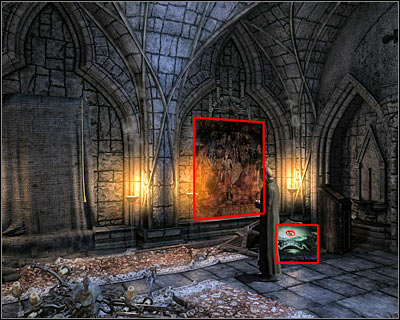 This site is not associated with and/or endorsed by the Focus Home Interactive or Frogwares. All logos and images are copyrighted by their respective owners.