The DOTA Auto Chess game guide is everything you need to quickly learn how to play this popular mod to DOTA 2 game. Here you will find information on how to install the mod, what are the most useful keyboard shortcuts or what it's all about in this unique modification. The guide also contains a full list of synergy heroes and advanced advice on how to develop an army. You will also learn what to pay attention to in the first place and earn a lot of gold as soon as possible. Practical tips without beating about the bush.

How I can launch DOTA Auto Chess?

Dota Auto Chess is a mod to DOTA 2 that can be played for free. Simply download DOTA 2 from Steam, then go to the "Game Room" tab, select the game from the list and install it. When the process is over, click on "Play DOTA Auto Chess" to start playing. The game will automatically select your opponents.

What is DOTA Auto Chess? What is the main premise of the game? 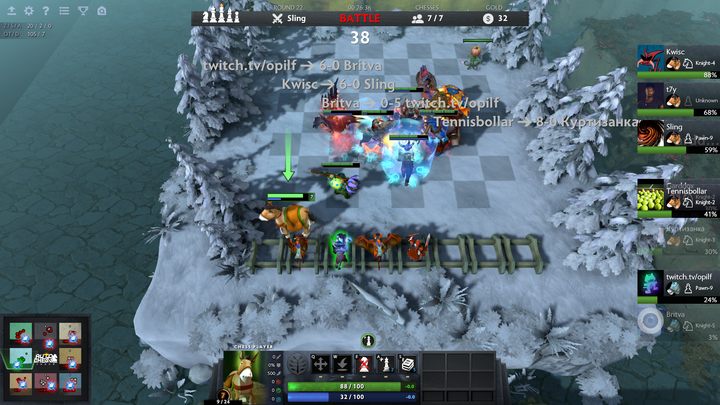 DOTA Auto Chess could be called a "tower defense battle royale" (with elements of poker). It consists in building an army of heroes, which will defend itself against the waves of enemies. However, we do not play alone. Up to eight players take part in one game, each with their own part of the map to defend. The winner is the one who survives the longest and stays alone on the map.

During the game each player controls their own courier. They allow you to display heroes or collect items and have health and experience levels. To perform a heroic action, select courier, move the cursor over the cone and select one of the skills:

Q - sending the hero to fight. After using this ability, click on the place where you want to place the unit.

W - taking the hero back to the homestead.

The action of setting up pawns can only be carried out in the intervals between rounds. We don't have much time then, so it's very important to use keyboard shortcuts efficiently. In addition to those responsible for the actions of the courier, it will be useful to use the space (turn the hero shop on/off), TAB (switching between the boards of players) and F1 (choosing your own courier).

Note: Shortcuts responsible for actions of the courier work only if the courier is selected and close to the unit where you are performing the action. For this reason, always try to keep the courier roughly in the middle of the line.

10 Mods That Grew Into Full-Blown Games

Some of the most popular games enjoy quite unlikely origin stories tied to the modding scene. Here are 10, fan-made mods that have become groundbreaking smash-hits, or at least great, standalone video games.

Give Me My Life Back! Games In Which We Spend The Most Time

A dozen, several dozen, several hundred  we often quit a game long before the end credits, but there are some productions that we just can't get enough of. We have prepared a list of games which are the longest-lasting games for the users of Steam.

A Wasted Opportunity, or How Blizzard Missed the Chance to Beat League of Legends

Productions such as League of Legends or Dota 2 started out as mods for Blizzard's games. However, the Irvine-based tycoon missed this opportunity, and now the billions of dollars various MOBAs generate go to someone else's pockets.

Mobbing in MOBA: We don't like players being jerks in games says Riot

How to deal with toxic players according to DOTA 2 and League of Legends creators.

This site is not associated with and/or endorsed by the Valve Corporation or Valve Software. All logos and images are copyrighted by their respective owners.