Kill 2 Barons of Hell with one shot.

You can do it during the last battle before the boss - use BFG.

Their location can be found further in the walkthrough.

Kill 25 demons with the BFG.

Lay the wraith's souls to rest 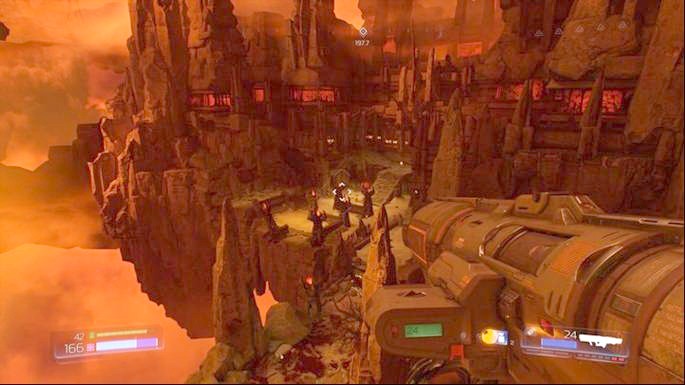 At the start of the level you should go ahead and jump from high altitude to the lower floor. There you will be attacked by Cacodemon and a few Imps. When you will walk slightly further a powerful attack of demons will start. 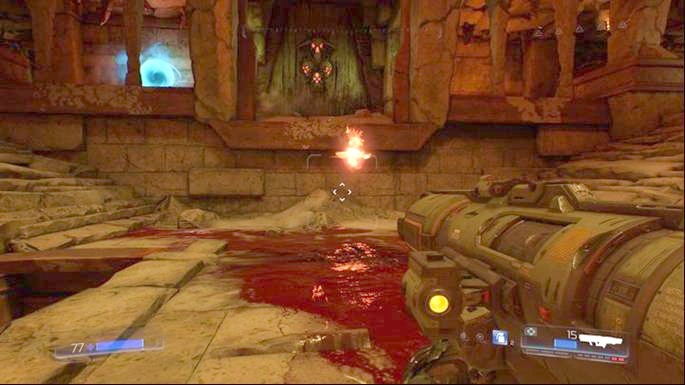 In order to win this battle you must use two pairs of teleports and the Berserk floating in the middle. You should use the power-up for killing the first Summoner. Then the hardest part of the battle will start. In order to quickly get rid of many enemies you can fight from the corridor on the right or left by using charged Gauss Cannon. When all demons are in straight line, a single accurate shot will quickly clean the area. Under the stairs in the middle of the arena you will also find chainsaw fuel which will be useful for eliminating the strongest enemies. 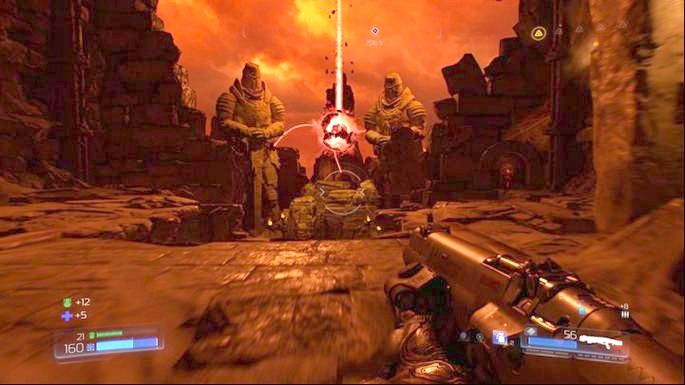 Once the battle is over, keep going ahead and jump one floor below at the edge. 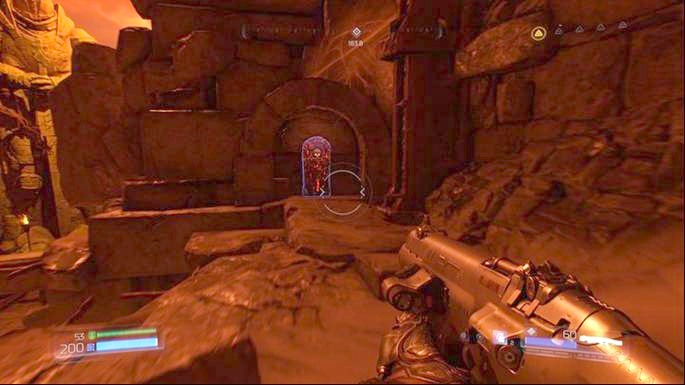 On the right side you will notice the red secret switch needed for the challenge. 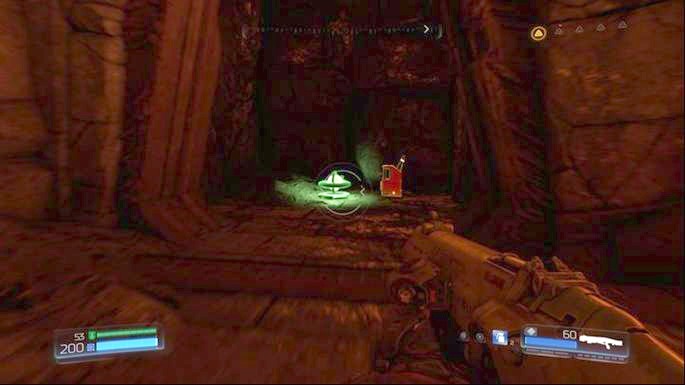 Use it and then go back up through the rock on the left. In the niche on the right side there will be armor hidden and chainsaw fuel (secret). Pick it up and jump down. 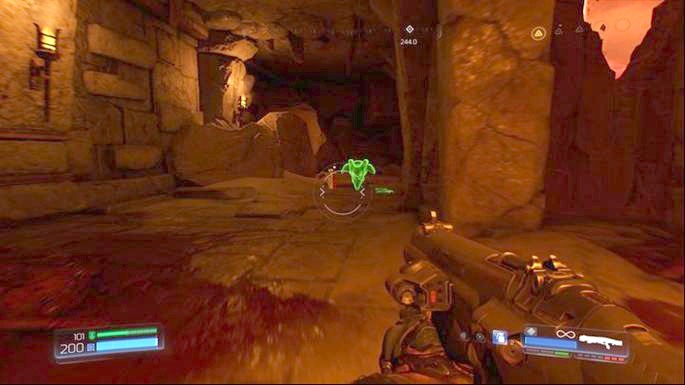 On the left side there is a corridor that will lead you to other items. You will have to face a small group of demons there. 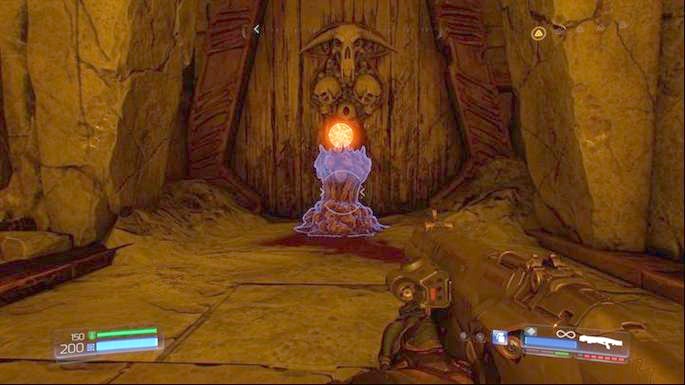 Leave the tunnel once the battle is over and go to the place ahead. Turn to the right before you start jumping between the islands on the left. In the niche there is an Automap hidden. 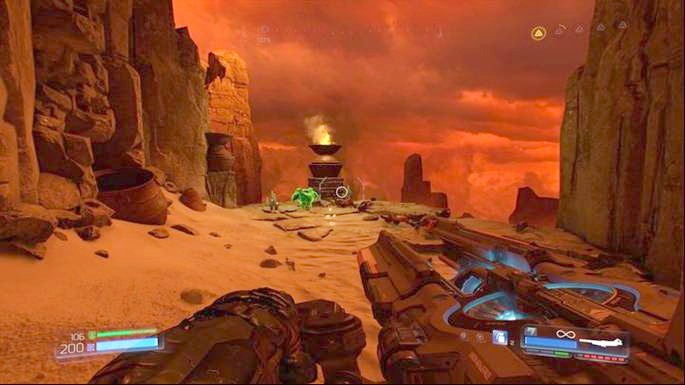 By jumping between the rocks you will reach a place with three paths. First go to the right where you can kill two Imps and pick additional armor. Then use the first path to the left and walk to the place with portals and green flames. Soon you will encounter a large group of demons. This battle is slightly easier than the previous one. Just remember to use portals, gravity jumps and Quad Damage. On the arena you will also find ammunition for BFG. You should use it in order to complete one of the challenges. 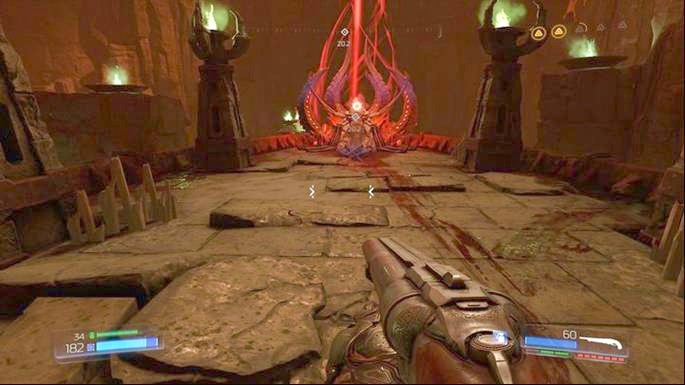 The door on the right will open once the encounter ends. Walk through it and climb to the top. There you will find the rock on which you must use the Crucible. 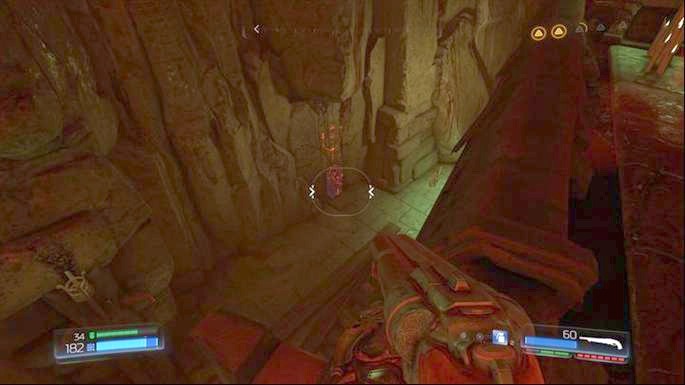 Once you're done, walk to the edge on the right and then jump one floor below. There you will find the second secret switch needed for completing the challenge. 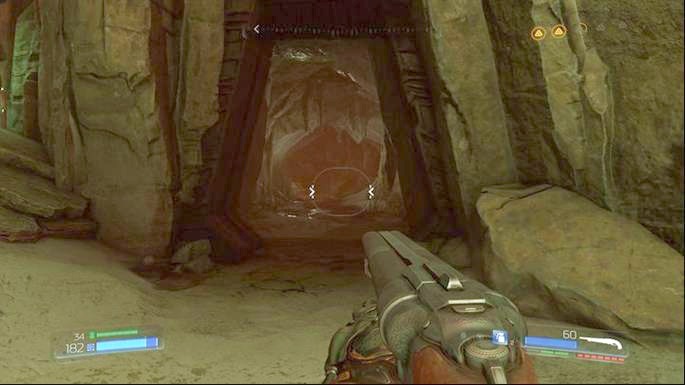 By using it you will unlock the passage on the right from the large skull to which the radar points you. Instead of entering the skull you should walk through the mentioned passage. 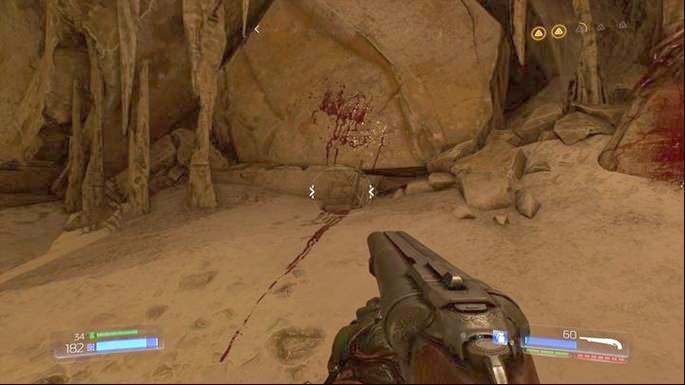 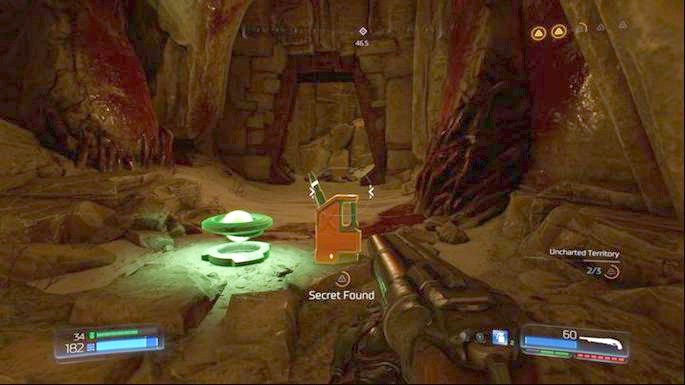 Another secret will unravel once you collect it. 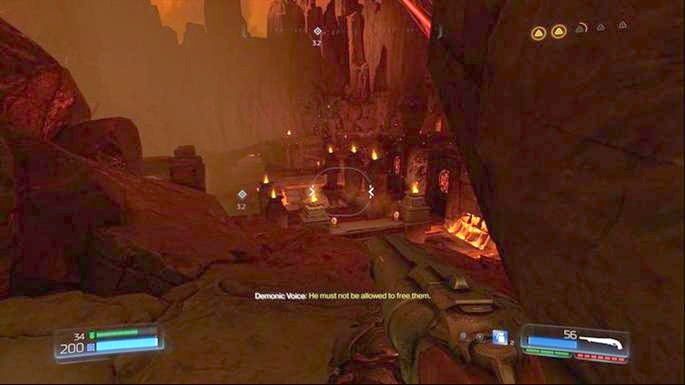 You will leave the tunnel in the same place to which you would get by using the road through the skull. You can go to the right where other battles will start. 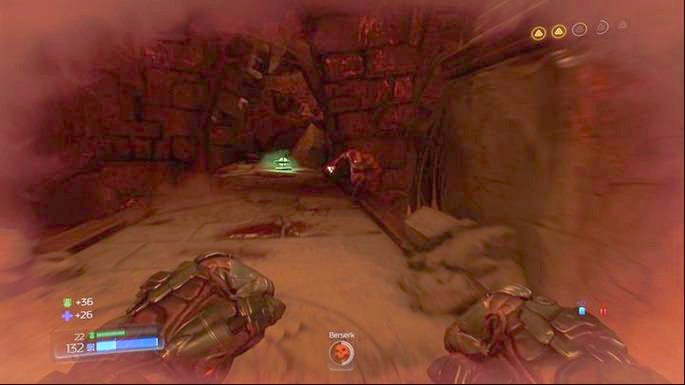 The enemies will be very powerful, but luckily you will find Berserk in the middle - it will make the battle much easier. Use it just after the first Mancubuses appear and it will allow you to kill most of the strong enemies. The last opponent to defeat will be the Baron of Hell, but once he remains alone he shouldn't be of much trouble. 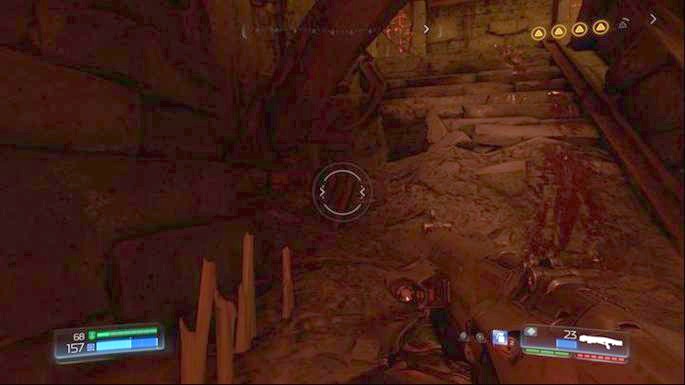 A door leading to the next objective will open once the battle is over. Climb on it through the stairs on the left - there will be a hole there that leads to the penultimate collectible. 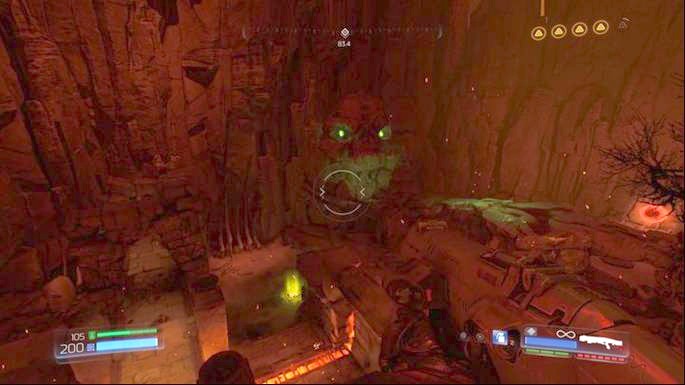 Get on the skulls on the other end of the arena after you destroy the second stone. 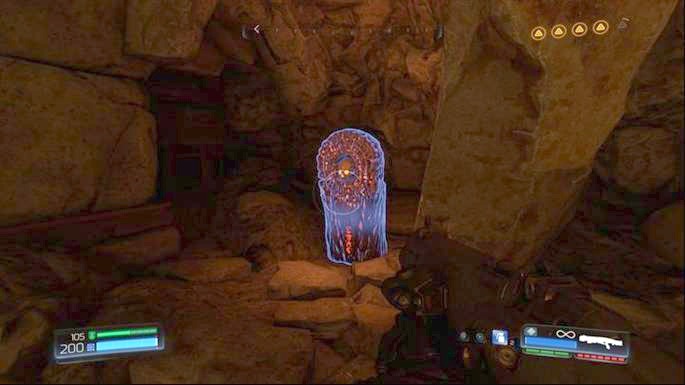 Keep going ahead and on the right side you will have the last red secret switch needed for the challenge. Press it, turn around and go back. 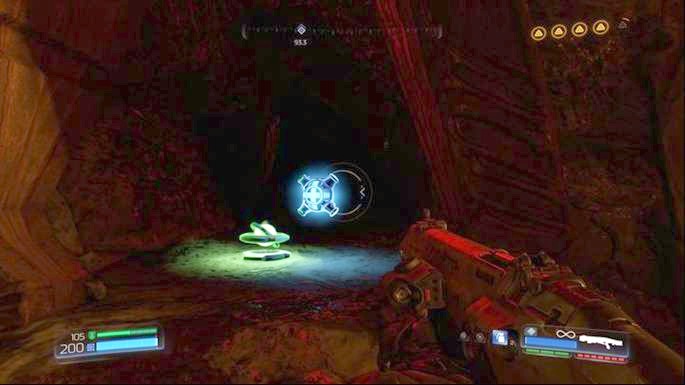 On the right side you will find a niche with Mega Health and BFG ammunition (secret). 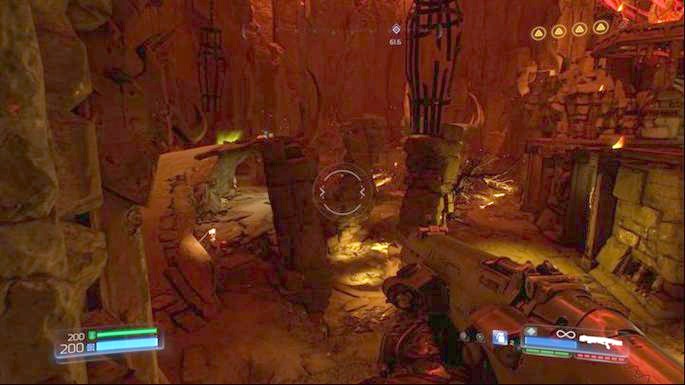 The tunnel will lead you to the third great battle with the demons. At first you should stand mostly at the entrance to the arena. There you should kill Imps, Pinkies and Hell Knights. 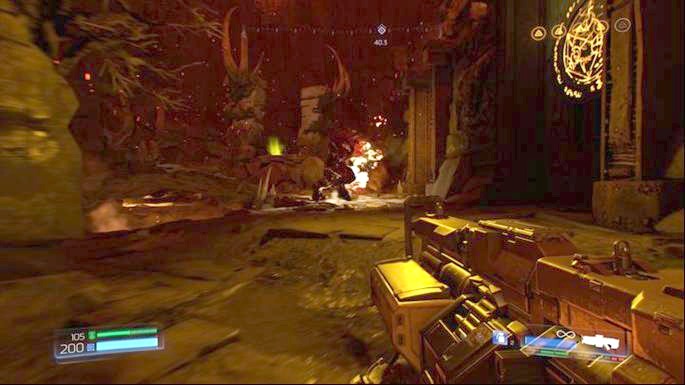 Once you kill enough of them, Mancubuses and a bit later the Barons will appear as well. When that happens, run for the Quad Damage in the middle, kill one large demon with chainsaw and then use BFG. Before you do the latter, make sure that both Barons are close to each other so that you can finish the last challenge. Jump into the hole in the skull marked by the radar once the battle is over. Below the final encounter waits.